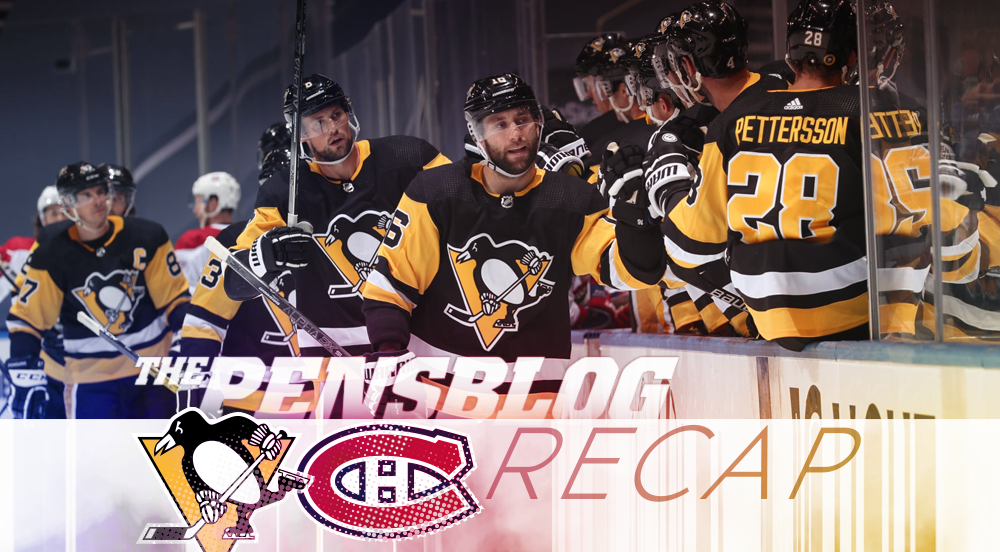 In a best-of-5 series, there’s little margin for error.

And that’s exactly what the Penguins showed up to do last night: win.

Whatever your definition of “stealing a game” is, you could make the case that Matt Murray either did that or came as close to hitting your definition as humanly possible, out-dueling Carey Price to secure the win for the Pens.

Price didn’t make it easy on him as the Montreal netminder added to his stinginess in net, saving 1.98 goals above expectation (via Evolving-Hockey.com).  Murray was up to the task and was huge when he was called to action, particularly when it mattered most: the third period.

It was the exact response that you want from an under-fire team to turn this series into a best of 3.

Lined up and ready for hockey. pic.twitter.com/3diwSugc8D

There was chatter about potentially seeing someone like Sam Lafferty or Evan Rodrigues coming in for Patrick Marleau on the 3rd line that was pretty lifeless in Game 1 to go with the unending chatter surrounding the Penguins 3rd D pairing and starting goalie, but Matt Murray did nothing to lose the job and HCMS decided to roll out the same roll with the same lineup, going up against the exact same lineup Claude Julien’s Canadiens iced in the OT victory.

Longwinded way of saying “no changes to either lineup.”

The opening 4+ minutes of this game were a stark difference from that of Game 1: choppy and end-to-end.  You could tell from the get go that the ice was going to be a problem.

Passes weren’t clean, the puck was stopping up on guys forcing them to overskate it, etc. etc.

It was even more evident just prior to the Pens opening the scoring as John Marino of all people had trouble getting the puck under control.  But Crosby managed to, settled it all down and found Guentzel with a cross-ice outlet feed to get the Pens out of their zone and up ice.

Vintage Crosby here, too, as he was the first one up ice getting involved and giving Jake a passing option, taking the feed and walking right in on Price to open the scoring, giving Ryan Miller nightmares even during his offseason.

Pens would get their first PP about 2.5 minutes later after Montreal got caught with too many men.  Hornqvist got put back on the top unit with Crosby, Guentzel, Malkin, and Letang and almost immediately, the powerplay looked more menacing with that reckless maniac crying havoc and letting slip the hogs of war.

They didn’t score, but probably did enough to score in registering 5 shots on goal.

Then, with 8:37 left, the Pens would have to go on the penalty kill for the first time after Pettersson got caught hooking up Drouin.  It went nowhere for the first 1:12 of it until Joel Armia got rung up for holding Jack Johnson in the corner.  That 4v4 lasted exactly 33 seconds before Dumoulin went to the box also for holding, immediately preceding a very natural and normal play.

When the smoke cleared, Montreal ended up with 33 seconds of a 5v4 and with 14 seconds left in that, the Habs picked up another too many men penalty.

Anyway the Penguins didn’t do anything with the ensuing powerplay.

Phil every time he watches our power play without him pic.twitter.com/yvxYPQa0bz

The start of the 2nd 20 was more or less all Montreal with Matt Murray keeping them keeping them at bay long enough for Bryan Rust to sit in the box for roughing 5:33 into the middle frame.

No harm no foul as the Pens were just automatic on the kill.

After 2 minutes of that wretched 5-on-5 hockey that we definitely do not like, Joel Armia gave us another reprieve by hooking up John Marino to give the Penguins their third powerplay of the night.

Once again, the Penguins didn’t score, but they sure as hell did enough to do so, particularly because of Patric Hornqvist’s speed metal shit-stirring.

Entirely unsure how someone hasn’t taken their skate off and tried to stab him yet.  Absolute shithousery here.

After this powerplay, we actually got less than 2 minutes of 5v5 play before Joel Armia took another penalty, this time against Justin Schultz.  Malkin and Weber got matching roughing minors after the play because Armia and Zucker got into it.  With 26 seconds left in the powerplay, which wasn’t anything to write home or blog about, Paul Byron slashed Rust’s stick.

Pens took their timeout to draw something up for the 5v3 and get the guys a rest and presumably inject more speed metal into Hornqvist’s veins.  But aside from Letang going super saiyan after fanning on a shot on the 5v3 to set up Hornqvist, the Pens would go to 0-for-5 on the PP.

Right at the start of the period, the Pens had a massive, massive breakdown in coverage to give the Habs a 2-on-1 from basically the red line in on Letang.  Letang did as much as he could to match Kulak’s driving speed and delay long enough that Tatar was a little too close to Murray to be accurate, but the read and push off from Murr was still necessary.  Huge save to preserve the lead and set the tone for third.

Montreal kept up the pressure for the next 6 minutes before yet another one of those shifts from the Malkin line to eat up some time.

And that’s exactly what the Penguins continued to do- eat up time and survive.  Marleau hit the post with about 6 and a half to play and then….

All about that play in the D-zone, baby.  Sheary makes the initial play along the boards to latch onto the puck and cooly move it down low to Malkin.

Malkin didn’t dick around with the pressure around him, quickly moving it to Dumoulin in the circle and trapping the 3 Habs forwards in deep.  Dumo channeled his inner [insert your favorite footballer here, for me it’s Marcus Rashford], giving a little flick up to Sheary to do the rest.

Big time play by Sheary here to beat the defensemen to the puck, tip it by him and break in on a 2v1 with Zucker, putting it on such a platter that even pre-twist Four Leaf Tayback could’ve scored.

But you just knew the Habs weren’t going away.

And away they did not go, catching the Pens spread out a bit more than you’d like to see in the D-zone with Petry working it down the wall to Lehkonen.

Really like the play from Letang here as Lehkonen recognized how much space he had in the zone and going for a stroll.  Letang steps quickly and forces Lehkonen up near the blue line, where he had support from the forwards.  As soon as he’s comfortable with those guys handling Lehkonen, which they probably should have, he drops back to the front of the net to protect Murray.

No one steps to Lehkonen, though, after Letang passes him off, allowing him to walk to the top of the far circle from where he started and to throw a shot towards the net.

Not sure if it’s Kotkaniemi or Dumoulin who gets a piece of the shot, but it changed directions on Murray at the hash marks, who you have to say did a solid job of tracking it and kicking it out.

But it was Kotkaniemi spinning Dumoulin and getting to the rebound, beating Murr from a sharp angle as he tried to recover to break the shutout bid.

Really tough break for Murr here.  Just so hard to swallow a rebound that’s tipped about 10 feet in front of you.

Then, it was all about surviving for the last 2+ minutes and begging for that empty netter to cover the spread.

Pens got hit with a couple of icings, but after the final one, a Blueger faceoff win and a Rust steal put it in the right area for Guentzel to break free and bury the gimme goal and close it out.

The BUZZWORD: PIVOTAL Game 3 is Wednesday night.  Pens have a change to grab this series by the scruff of its neck to potentially clinch on Crosby’s birthday.  Another 8 PM start.