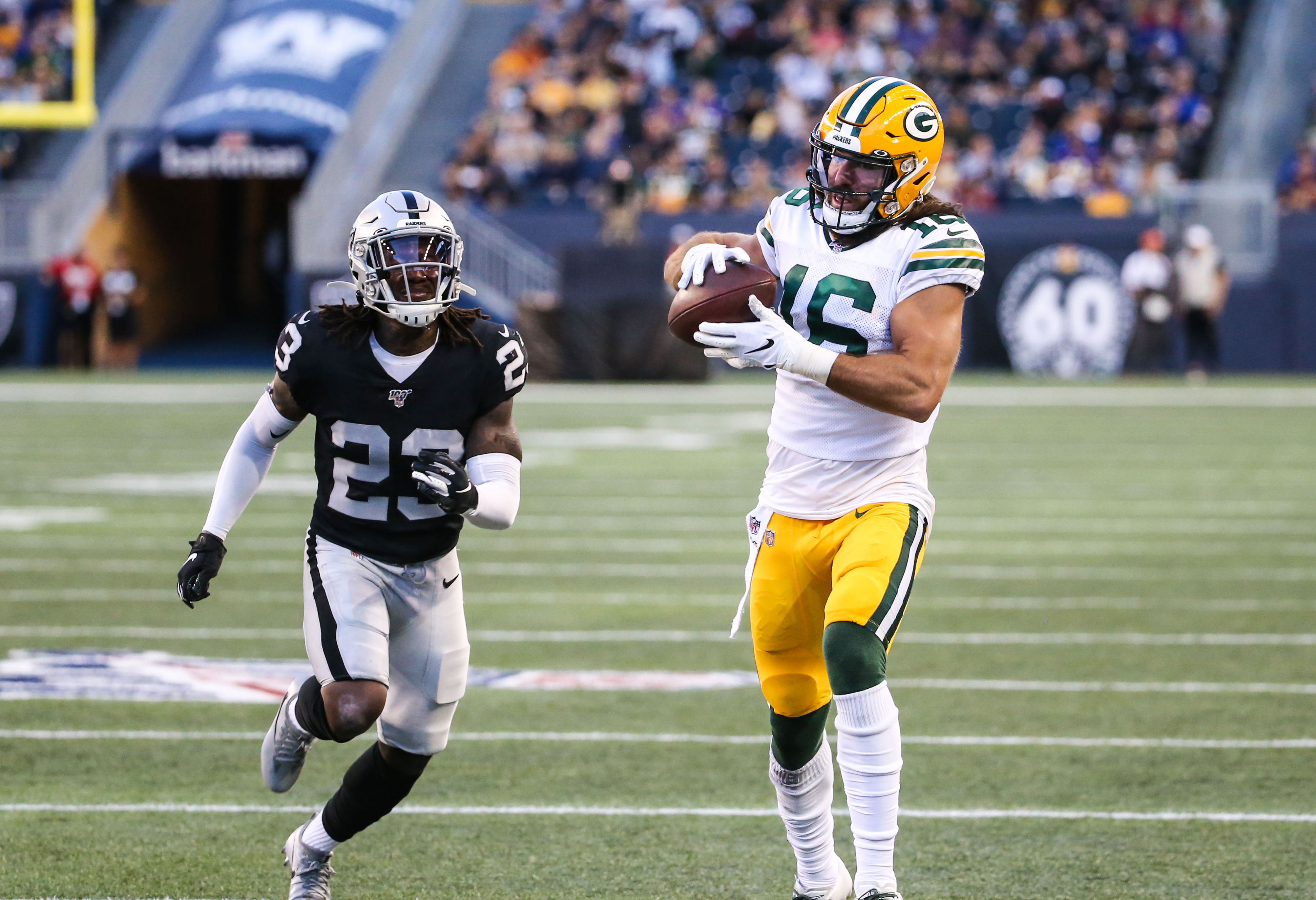 Packers free agent signee Devin Funchess announced that he would not be playing football this season because of health and safety concerns surrounding the ongoing Covid-19 pandemic. So, the question now becomes how will the Packers adjust their thinking at wide receiver knowing that Funchess is not available in 2020?

GM Brian Gutekunst indicated to reporters in a Sunday conference call that there is no urgency to bring in new players from outside the organization.

“I wouldn’t say we’re any more active than we ever have been in looking for help at any position,” Gutekunst said when asked about bringing in another wideout.

Davante Adams remains the undisputed WR1 but all the other spots on the roster are up for grabs. Here is a look at how the absence of Funchess will affect the Packers wide receiving corps behind Adams this season:

Funchess was likely going to be Lazard’s top competition for the second wide receiver spot. Without Funchess there, Lazard’s chances of being WR2 increase significantly.

Lazard was cut before the season started but re-signed and was placed on the active roster in time for Week 1 and played well after he was inserted into the lineup late in Week 6.

Lazard’s size and route running are big assets for him. If he can improve his hands a bit, he can become a very productive second option for Aaron Rodgers this season.

MVS is the Packers fastest receiver and his ability to create big plays downfield separates him from his competition. Injuries slowed Valdes-Scantling after a solid start last season.

Last year, Valdes-Scantling started the season as WR2 and Funchess’ absence gives him a better chance to reclaim that position. The key for MVS will be to prove he can do more than just run deep routes to help the offense. He also needs to run more precise routes and to improve his hands a bit to take his game to the next level.

EQ missed all the 2019 season with an ankle injury so this will be his first season in Matt LaFleur’s offense. The former Notre Dame star finished his rookie campaign with a strong performance and showed flashes of promise that indicate he could be capable of a bigger role this season.

St. Brown has the size the Packers like in a wide receiver and may be able to carve out a role for himself in the slot. The Packers will rotate players in the slot with Adams, tight end Jace Sternberger and EQ all likely to get some snaps from that position.

LaFleur was enthused about St. Brown’s chances. “It’s going to be great getting EQ back in the fold,” he told reporters Sunday. “That certainly hurt us last year.”

Not having Funchess this season certainly improves Kumerow’s chances of staying on the roster this season. The fan favorite and former Wisconsin-Whitewater star has always been an outstanding player in preseason but has yet to show consistent production during regular season games.

Kumerow is a reliable route runner and has the trust of Rodgers but he needs to get more consistent separation from defensive backs to be more of a factor in the passing game. One thing Kumerow does very well that is often overlooked is his run blocking.

Kumerow will still need a strong camp to make the team but Funchess’ absence certainly helps his chances.

Begelton’s chances to make the roster also increase because he won’t have to compete with Funchess this year. The biggest challenge facing Begelton is adjusting to the NFL’s rules after starring in the CFL the past few seasons. He will have to do this without the benefit of preseason games and with an abbreviated training camp and virtual offseason.

Begelton is “only” 6’0” and he has a different body type than the other receivers on the Packers roster. If the Packers keep six receivers, his chances of making the team have improved. He also has the potential to play in the slot and utilize the middle of the field effectively but now must prove he can produce on the field.

The Packers also have several other players competing for spots. Malik Taylor, Darrius Shepherd and Darrell Stewart are all in camp and looking to make an impression on the coaching staff.

Taylor and Shepherd spent most of last year on the practice squad although Shepherd was active for a few games and struggled during the regular season after a fine preseason which earned him a roster spot. Stewart is an undrafted free agent out of Michigan State who also may try to establish himself as a slot receiver with a different body type than the typical taller receiver the Packers tend to favor.

All these players have a better chance of landing on either the roster or the practice squad because one more spot is theoretically available.

The bottom line is that the Packers are primarily looking for the players that are already on their roster to step up and produce.

“We do have a lot of confidence in our receiving corps and they’re going to have to take that next step for us to be as productive as we’d like to be this coming fall,” LaFleur said.