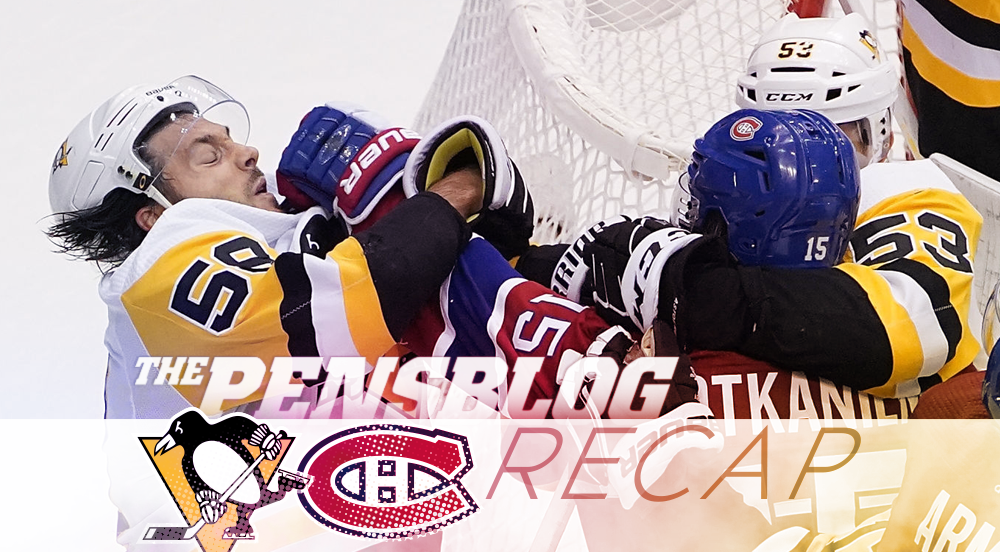 For the second year in a row, the Penguins crashed out of the playoffs before they even got going.

In retrospect, Game 2’s victory was about the only time the Penguins had a consistent spell of playing decent hockey.

Sure, they controlled a lot in Game 1, but Wednesday’s collapse and this Game 4 stinker showed one thing and one thing only: the last thing they deserved was winning this series.

They lost to the 24th best team in the 24 team tournament and they deserved it.

Those things probably played more of a role than any of us care to admit.

But the Penguins in the biggest win-or-go-home they’ve had in a while, they laid an egg and you don’t need your favorite blog to tell you that shit isn’t acceptable.

We’ll have more on what’s next later, but for now here’s the full recap:

HCMS came into the elimination game with some choices to make and problems to fix.  Chief among them was taking Jack Johnson and Justin Schultz out of the lineup.

Instead, the only changes were starting Tristan Jarry, his first career playoff start and first start since March 8th, when his SV% in those final 5 games before lockdown was .868.  The idea here likely to give the team in front of him, a team that let Matt Murray down, a necessary jolt.

He also brought Jared McCann back into the lineup after sitting him for Game 3, but made no other personnel changes anywhere in the lineup aside from bumping Rust up to Crosby’s line, Hornqvist up to Malkin’s line, and Sheary down to McCann’s line.

Claude Julien also made some adjustments to his forward group, letting Suzuki and Kotkaniemi center the top two lines and bumping Danault down to the 3rd.  He also brought in a Hitchhiker’s Guide to the Galaxy character named Belzile in to play on the 4th line.

First real chance of the game saw Crosby rip a one-timer off of Price’s mask from the right faceoff dot.  Sid was really buzzing, but all in all it was a pretty disjointed opening couple of minutes.  Really just an early feeling out process from both teams.

But that was really about it as both teams were having a staring contest waiting for the other to make a mistake.

And the first mistake would come in the form of Geno catching Petry with a high stick behind the Montreal net with 5:29 left, right when the Zucker-Malkin-Hornqvist line looked like they were about to establish the forecheck.

But the Pens PK, particularly the forwards, kept a super high press throughout the two minutes and disrupted anything the Habs PP could even think about putting together.  Just surgical.

But the extremely dull, low-event period would end with shots 8-5 in favor of the Pens.

More whistles to start the period than that time my college gave all incoming freshman a keychain whistle with their dumb lanyards and they all ran around at like 2 AM blowing them because freshmen are dickheads.  All Montreal though just living in the Pens end.  Pens were defending really well though and protecting the net more than they had done at any other point of the series.

During one of those spells of solid defending, Guentzel gave Letang and Dumo some help behind the net to spring board an eventual 2v1 with Crosby and Guentzel giving the Habs the business on a shitty change by the Montreal skaters.  Petry defended it well, forcing Guentzel behind the net and giving Price a chance to read and make the save on Sid at the side of the cage.

Somewhere in there, Jared McCann would save the Penguins whole ass bacon too.  Montreal was purposely shooting pucks wide of the net all game long to get wild bounces and at one point, Penguins Defenseman #3 went for a stroll up into the high slot on one of these occasions, which started because Schultz decided to not clear the puck, instead choosing to do something else that involve not clearing the puck with 2 Canadiens around him.

And with all of the puck that the Habs had had in the period, all it took was an errant Yo Ell Armia high stick with 8:24 remaining to give a little bit of it to the Pens and open the door.

That door was slammed right the fuck shut by a Montreal penalty kill that wouldn’t even let the Penguins enter the zone.

Then the Habs would get their own PP when Dumo got hit with a holding penalty after the Bud Light Chugger nearly scored, but the Pens would survive enough to get to the second intermission level with the Canadiens for the second game in a row.

Second period shots on goal would go out to the tune of 6-5 in favor of the Habs, as would everything else in the period.

All they had to do was win one period to keep their season alive.  And in the early going, Montreal looked the more likely team to euthanize the Penguins with Byron opening the period with a shot off the pipe.

Then, Jarry was truly called to action for the first time in the game, having to bail the team out himself after they made a total mess of everything everywhere.

That got them going, though, and they started actually skating and, 6 minutes into the period, got another PP chance when Dale Weise tripped up McCann in the neutral zone.

This time, the powerplay had a much more menacing look to it.  Probably because they actually got into the zone two whole times.  And because Crosby hit the crossbar behind Price.

They didn’t score, but the juices were flowing.  If you believe in momentum, they had it.

Off a tipped dump in, Jarry controlled it for Letang to break it out.  Extremely normal stuff.

But Tanev was unable to control the puck on his off wing, eventually giving it away straight to Lehkonen in the high slot.

Lehkonen had to be more shocked than the rest of us that have watched Tanev all season that the lightning rod made a mistake, slipping it to Byron to drive the net.

Letang does everything he can to slow Byron down, hooking the shit out of him with Blueger.  Then, everyone just kinda….stopped.  Jarry came out to challenge, but found himself outside of his own crease for some reason.

That opened up enough of a lane for Byron to throw a blind pass right to the net front for Lehkonen to jump in and bury unchallenged.

If you’re going to fault Murray’s positioning and technical play on Petry’s game winner in Game 3, you’ve got to be putting some blame on Jarry here for being out of his own crease when Byron loses control of the puck.  If he’s even remotely close to where he’s supposed to be, that pass doesn’t get through.

bout to be the worst series loss of the Crosby/Malkin era, and the fourth line is out there with 2 minutes left.

Love it.  Just have to love it.

Then, when the 4th line wasn’t out there anymore, the Pens got Jarry out of the net for the extra skater.  Then Shea Weber would take an eventual dump in, take a hit from Malkin, get a bounce along the boards and ice the game from 200 feet away for a fitting end to a garbage series.

Changes are surely coming.  We’ll know if they’re getting Lafreniere on Monday night.  Buckle up.