Your Morning Dump... Where the C's are facing a key test tonight 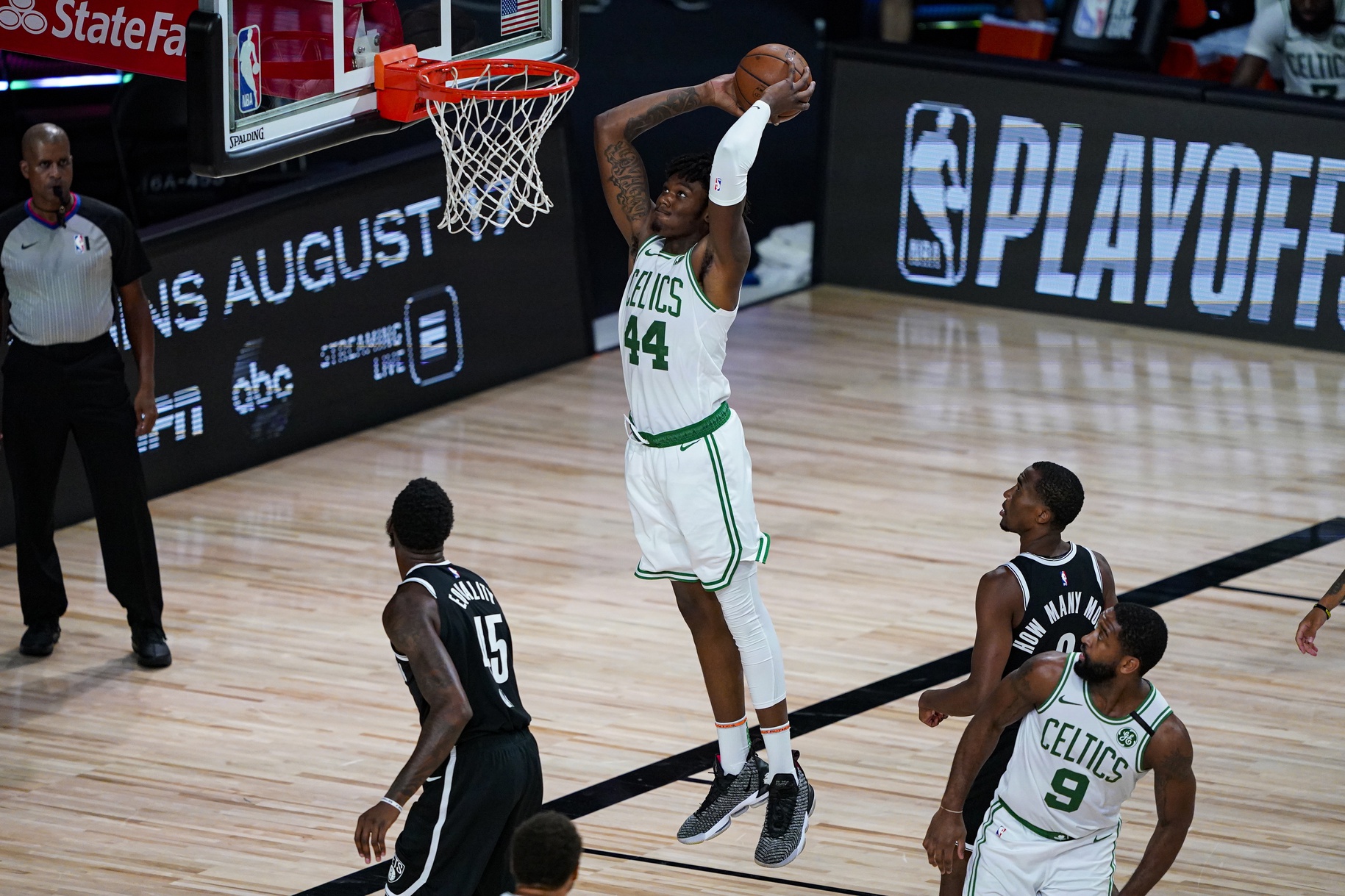 Your Morning Dump... Where the C's are facing a key test tonight

Last Friday, the C’s opened this rump season with a yardstick game against the Bucks, and after games against the Blazers, Heat and Nets, it’s time for another game against an elite Eastern Conference team. This time it’s the Raptors, who are practically a lock for the second seed despite losing Kawhi Leonard to the Clippers last summer.

So let’s take a look at the news and prognosticate…

It was one of the most dominant performances we have seen from the Boston Celtics all season.

The team’s 149-115 win over Brooklyn did more than just pad their record, which is the third-best in the East now.

Consider Wednesday’s whacking of the Nets as a warning shot of sorts to the Toronto Raptors, who remain ahead of Boston in the standings and will face the Celtics on Friday in one of the more highly-anticipated games inside the Bubble.

Jaylen Brown, who had a game-high 21 points on 7-for-13 shooting, summed up where the Celtics’ mindset is right now.

“Making sure we play the game the right way defensively, being a really, really good team, being a (expletive) to beat going into the playoffs,” Brown said. “We figure that out we’ll be alright.”

The C’s have shown those frustrating flashes of potential all season long–a combination of youthful inexperience and injuries have kept them from going on a tear, but it’s always felt like it was a matter of when, and not if, the Celtics would come together and get hot. If now’s the time, it couldn’t be better. This is an odd environment (one of the more bizarre made-for-TV aspects of the court is that those giant video boards are only on the camera-facing sides of the court. The game is being played with a giant black hole on one side, where there is nothing—no coaches, no players, no fans, nothing. There’s literally nothing over there but empty space and empty seats.)

It feels like momentum could mean a lot more in this environment. There’s no discontinuity between home and road, no travel to sap energy. If the C’s found something on Wednesday, it might stick with them for quite a while.

Page 2: Where we catch up with the players

That’s part of what makes Hayward a great facilitator. His knowledge of where other players are on the floor gives him escape valves. Sometimes the late decision will get him into trouble, but therein lies the trade-off: would you rather Hayward be aggressive and play like he has over the past few games if it costs a couple of extra turnovers, or would you rather he play it safe and be more tentative.

The aggression puts pressure on opposing defenses and, ultimately, should pay off in more openings for his teammates. It’s not just about Hayward scoring or passing, either. An aggressive Hayward has more gravity as he cuts through the defense, drawing defenders a touch closer to him and creating lanes a touch wider for players like Jaylen Brown, Jayson Tatum, or Kemba Walker.

Hayward’s time with the Celtics has been marred by fluke injuries, but it looks like the guy that was there at the end of the regular season is still there now that the seeding games have started, and it’s the guy that the C’s originally thought they were getting when they signed him back in 2017. So much the better for the team–because as John points out, a more aggressive Hayward makes the game easier for everyone else. This is a game that is played with inches and tenths of a second, and every inch and every split second that Hayward is able to hold the focus of multiple defenders counts.

With teams like the Bucks, the goal is forcing the defense to consistently commit more than one guy to your star–because if it takes two guys to force your star to seem human, then you’re going to get a four-on-three man advantage everywhere else, and in the NBA, that’s enough to make average players look great (basically, when you hear about great players making the guys around them better, this is part of what’s going on). In this situation, defenders know what they’re up against and how they’re going to try to stop it.

But with teams like the Celtics, what you want is a damned if you do–damned if you don’t scenario. You want defenders second-guessing themselves. After they get burned a few times helping onto a guy like Hayward, and then get burned a few times because they don’t help onto him, you’ve reached a point where you can freeze the defender because they don’t know which is worse–leaving their guy or sticking with him, and that, ultimately, is where you want to be. Because the thing is, the defender is going to do one of those things, but the extra time it takes him to decide which means that he’s not going to be able to do either action as well as he could have.

There are parallels between Brown and Langford as rookies that have emerged over the course of the season, and they felt especially clear after Langford’s solid showing against the Brooklyn Nets in Wednesday’s 149-115 victory. Langford — who was +27 despite a pedestrian stat line — defended Caris LeVert, grabbed some big rebounds and showed flashes of his often-praised feel for the game.

Like Brown as a rookie, Langford’s key to playing time is defense, and Stevens tested him against some of the league’s best this year — including a few possessions against James Harden and (yes) LeBron James. The results weren’t always pretty (like Brown as a rookie), but the Celtics clearly like what Langford can do on that end and want him to know where his minutes this year and next might come.

“He’s a good worker, he’s one of our more solid defenders,” Stevens said after Wednesday’s game. “That’s going to give him a chance to play, especially with the way we’ve played the first couple of weeks.”

The similarity that I’m pulling for Langford is a bit more old-school than Westerholm’s choice of Jaylen Brown. I’m going with Reggie Lewis, and for a couple reasons. First, Reggie’s draft stock tanked because he went to the draft combine while he was sick, and his performance there was not exactly stellar. Likewise, Langford entered his freshman year as a highly regarded prospect, but his already suspect shooting looked even worse as he struggled to play through a thumb injury. Both guys saw long-term assessment of their value plummet due to short-term considerations.

And, like Lewis, Langford is joining a team with championship aspirations.

But the similarities to Brown are there as well–I like that both of these guys were willing to put defense first in order to get time on the court. That’s huge, because that’s not how these guys are taught the game. If you’re in the NBA, you have not had a hard time scoring at any other level of basketball, and scoring is how you draw attention to yourself. Scoring makes you look good. It’s what gets you onto a good AAU team, it’s what gets you a scholarship offer, and it’s what gets you noticed by the pros most of the time.

Then you get to the NBA and you find out that hey, guess what, everybody can score, and what can set you apart is something that’s been an afterthought at every level of play that you’ve been at so far…

Not everybody, and this is huge, not everybody in the league is willing to make that adjustment. The C’s have plainly made it a priority to draft guys with that mindset though.

We wouldn’t be surprised if Williams played only sparingly against Toronto on Friday night. But given that none of Boston’s youngest players have stated a strong case for increased playing time entering Wednesday’s game, Williams becomes the first one to submit an application that Stevens must consider (and rookie Romeo Langford, with his continued solid wing defense, has done the same).

Williams did typical Williams things. His first six makes were all at the rim, including a pair of alley-oop finishes (most notably a particularly sexy set play in which Gordon Hayward sprung Williams with a backside screen and Marcus Smart delivered a long-distance lob). Williams capped his night with a 20-foot jumper, showcasing newfound range in a late-clock situation.

His blocks were relatively quiet, at least by his volleyball-spike standards. Williams did come rushing with help to swat a Joe Harris offering across the court, then practically leaped over Langford to swat a Dzanan Musa layup attempt.

Williams played well enough Wednesday night to resurrect the Timelord nickname (NBC Sports used it three times in headlines), and it’s fair to ask how much of what he showed against the Nets can be done consistently. Williams looked rough earlier in this restarted season, but again, he’s a second year guy who lost a ton of opportunity due to a hip injury. It’s going to take him a while to get settled in.

What I hope to see from Williams is growth into a player who sees the game as more than just a highlight reel. He’s built in such a way that he can generate gasps from jaded fans and writers, but that’s not what the game is made of. A highlight-reel block might be the result of an overly aggressive maneuver that will get him whistled for a foul 90% of the time. Part of the adjustment to the pros is learning that most of the time, nobody except your coaches and teammates notice when you make the right play.

At the college level, an NBA caliber player is so much better than almost everyone else on the court that it doesn’t really matter if he’s out of position, or if he’s overreacting, or if he has to rely on his raw athletic ability to correct a mental mistake. But in the pros, almost everybody’s as good as you are in one way or another. It’s honestly the first time that most of these guys have come up against equal talent, and that requires relearning the game.

I think Williams is willing to put in the effort. He might not be as quick of a study as Langford or Brown, but I think he’s going to get there.