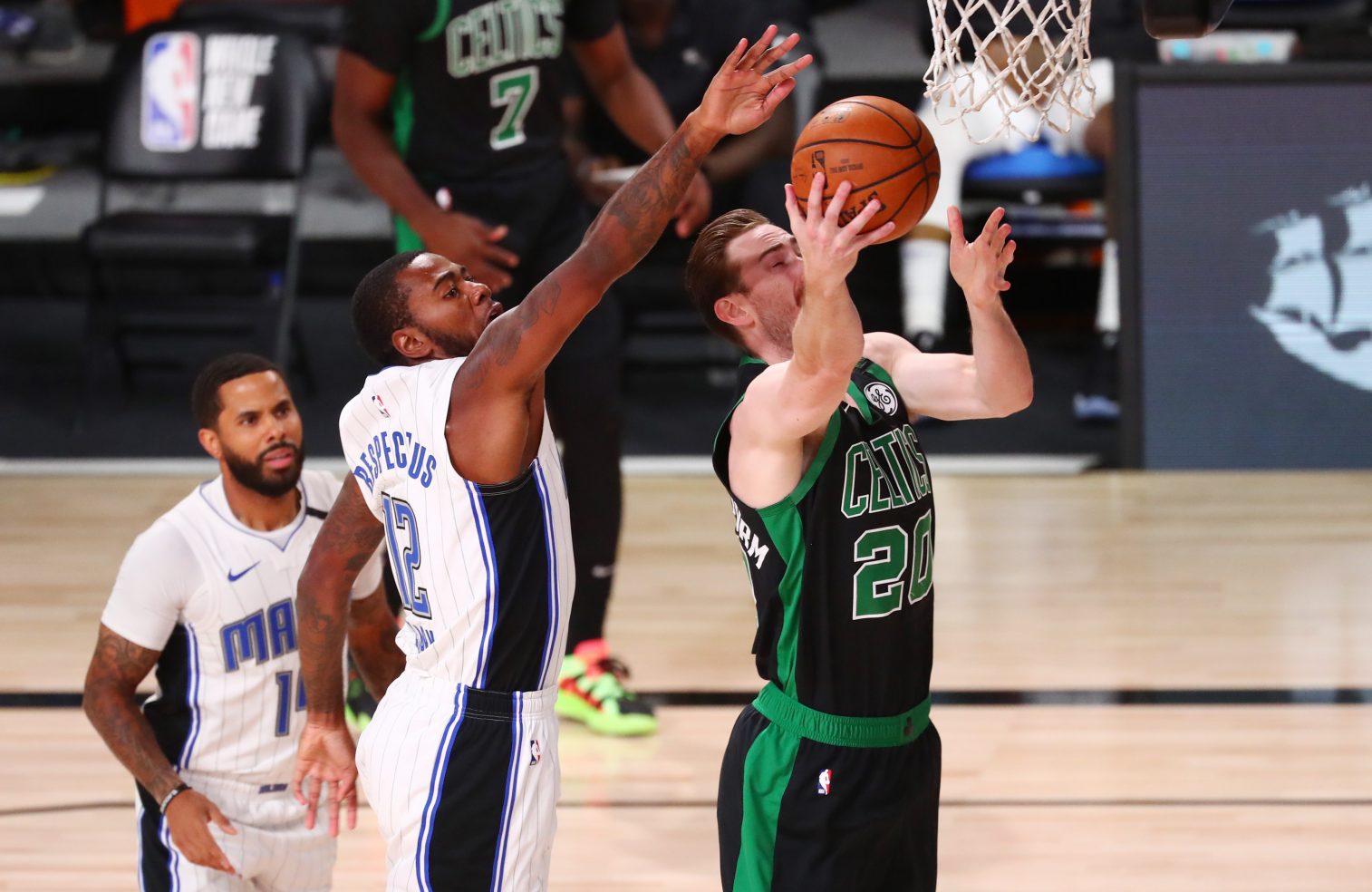 There wasn’t much question that the Magic wanted to win this game more than the Celtics. It seemed readily apparent for most of this game, and was vexing because Orlando lacked three starters (Aaron Gordon, Evan Fournier and Jonathan Isaac). But at the end of the day, Boston was a much better team—once they activated their effort, and survived a potential trap game with a narrow 122-119 overtime win.

Gordon Hayward dominated this contest with a 31 point, 9 rebound 5 assist performance. Jayson Tatum was right behind with 29, 9 and 6, and nailed the layup and free throws that sealed the Celtics’ win. Jaylen Brown exerted more defensive effort than most of the squad and finished with 19 points, 12 boards and an assist.

Orlando started by taking advantage of opportunities that a lackadaisical Boston defense gave them, and jumped out to a small early lead.

If the Celtics give even half a shit before halftime they should be able to blow these guys out.

Clearly I was not the only one thinking this. We still got some slick moments courtesy of Hayward and Tatum:

The Cs turned on the “caring about the game” switch and got the score more under control. But the Magic still held a 29-28 lead after 12 minutes of ball.

Gordon is taking over 🔥🔥 pic.twitter.com/z0srsTspLt

Despite his defense being as lax as everyone else’s, Hayward was an offensive force from jump, so it’s no surprise he catalyzed the squad in Q2 and captured the lead…but only briefly. Fans were not pleased.

Brad needs to go back in the lake

Stevens’s rotations have been criticized often this past season. This game, I’d say Rob Williams could’ve seen the floor more often than he did. (Theis wasn’t a good match for Nikola Vucevic’s size, and Kanter had major screw-ups during the two four-minute stints Brad gave him.)

The Cs surged back into a lead (a more substantial one) on the strength of plays like that by Brown and continued intensity from Hayward.

many people are saying jayson tatum…… nonetheless- more people ought to be saying Jaylen Brown. pic.twitter.com/ySsSj4h4i2

Boston held the advantage with the first half in the books, but not to a degree I’d be comfortable with given this team’s third-quarter difficulties.

Although the Celtics kept their lead through Q3, the Magic always stayed within about two to five points. Vucci Mane was the biggest reason for that, unsurprisingly, but in the absence of his squad’s other heavy hitters, guys like Terrence Ross and James Ennis also stepped up.

With Kemba Walker experiencing serious shooting woes, the onus fell on Hayward, Brown and Tatum to keep the Cs ahead, which they did.

Also, validating my earlier point, the second Timelord got back on the court, he got a bucket:

over everyone to Time Lord ⏰👑 pic.twitter.com/rqaizseQXu

So the offense has been real good, but any concern about the defense?

I have plenty, Jam! I would again attribute this to the relatively low stakes of this game for Boston: It no longer matters who they face in the first round with Philly losing Simmons and Indiana steamrolling in the bubble, whereas Orlando’s would have A Slight Chance vs. Toronto as opposed to zero vs. Milwaukee. But also…come on, y’all.

Turnovers were a big issue all game and certainly showed up in the final 12 minutes. The Tatum flub that let to an uncontested running dunk by Markelle Fultz was particularly embarrassing.

Which is not to say the Celtics displayed many issues that I’d call, like, alarming. The offense was every bit as crisp as it’d been during the Friday night blowout of the Raptors:

That assist by Robert Williams to Brad Wanamaker was Boston's 27th assist tonight. The Celtics are 13-0 this season when they have 27 or more assists.

With just over five minutes to go, back-to-back (and almost completely uncontested) triples from Gary Clark and D.J. Augustin put the Magic in front once again, albeit by just five points.

After all the praise from the Raps win, I bet Brad Stevens doesn't hate that the Celtics are losing to this Magic team that's missing 3 starters. Great way to reinforce what happens when you're not as locked in.

I can buy the theory Himmelsbach proposes above. Stevens also most definitely made decisions that got them in a hole earlier, but push comes to shove, this was about a team incredibly interested in the game’s outcome. Understandable, but frustrating for fans to watch. They got interested in the final minute:

Jayson in the clutch. Tuff bucket.

This sent the game into a fairly anticlimactic OT period in which most of Boston’s points came from free throws. But a W is a W…right?