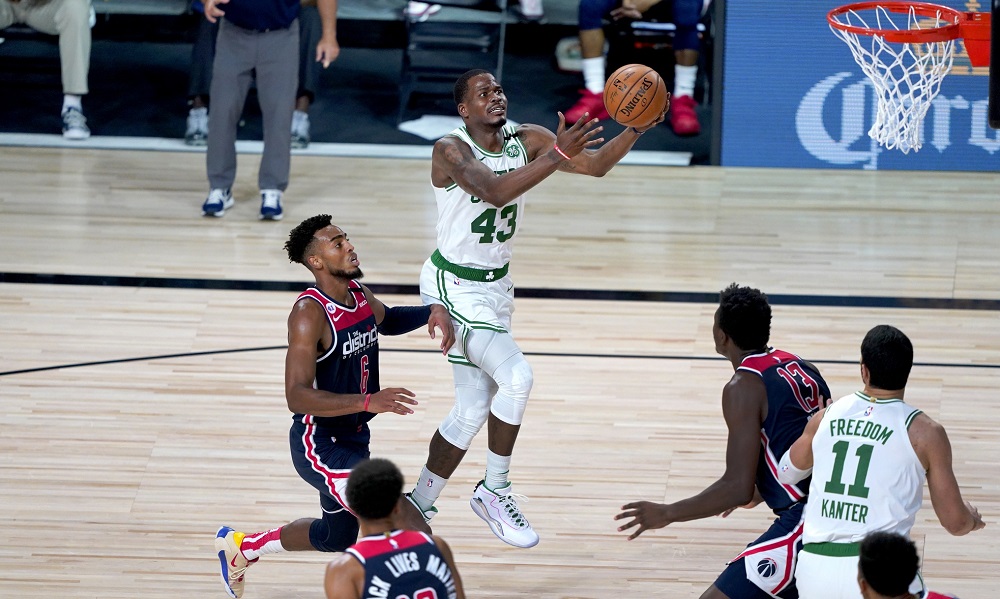 The Celtics junior varsity lost today to the Washington Wizards JV, 96-90, in their final seeding game in the Disney World bubble. The game was close throughout, until Boston’s poor 4th-quarter shooting (5 of 23 and 0 of 9 from deep) proved fatal.

Javonte Green led Boston with a career-high 23 points, but Semi Ojeleye (13) was the only other Celtic in double figures. Thomas Bryant countered with 26 for the Wizards and his teammate, Johnathan Williams, had 16 boards.

Some context: Has there ever been a more meaningless game in NBA history? The final contest for Boston and Washington in the bizarre, disjointed 2020 regular season was played on a neutral court, at noon on a Thursday, in front of zero fans, with the Celtics locked into 3rd place in the East and the Wizards long ago eliminated from even reaching the 8th place play-in game. The Wiz should have never been invited to the bubble, which they proved by going 0-7 in Disney World before today.

Need more evidence? Mike Gorman took the day off (Kyle Draper subbed on the mic), and so did a bunch of players. Wizards Bradley Beal and Davis Bertans opted out of the bubble and talented rookie Rui Hachimura had quad soreness. With nothing to gain, the Celtics let their top six guys take the day off.

Yet, with all of that being true, the NBA still kept score, so we were watching.

Early highlights were sparse, but Javonte came through.

Fans were speculating why Rob Williams didn’t see the court…

Ok, starting to think Timelord isn't playing yet because he's won his way into the rotation and is being protected

…but he did, mid-2nd quarter (and only played 6 minutes total).

There goes the Time Lord theories. He just checked in.

no time wasted
straight to the basket 🔨 pic.twitter.com/BG41S8tT8C

For whatever reason, Tacko Fall got no playing time in the first half, but the other guys produced highlights.

After trailing most of the way, the Cs rallied to lead, 46-45, but the Wizards regrouped and were back in front at the break.

I, too, would want to headbutt Moe Wagner if I played against him lol

Javonte Green's previous career high in scoring was 12. He already has 17 just four minutes into the third quarter. Gonna blow his previous high out of the water!

Enes Kanter had 8 points in 18 minutes.

Kanter uses finesse and strength to get to the bucket! #WholeNewGame

Tacko finally entered with 3 minutes left in the 3rd.

The game may have been meaningless, but it was entertaining.

Romeo Langford is done for the day with a sprained right wrist according to the Celtics.

Next up for the Celtics is Game 1 vs the 76ers in the playoffs.

Neither team shot 40% for the day.

Brad Wanamaker (.926) becomes the fourth Celtic, and the first since Larry Bird 30 years ago to lead the @NBA in free throw shooting.