Your Morning Dump... Where the C's didn't look their best, but looked like veterans 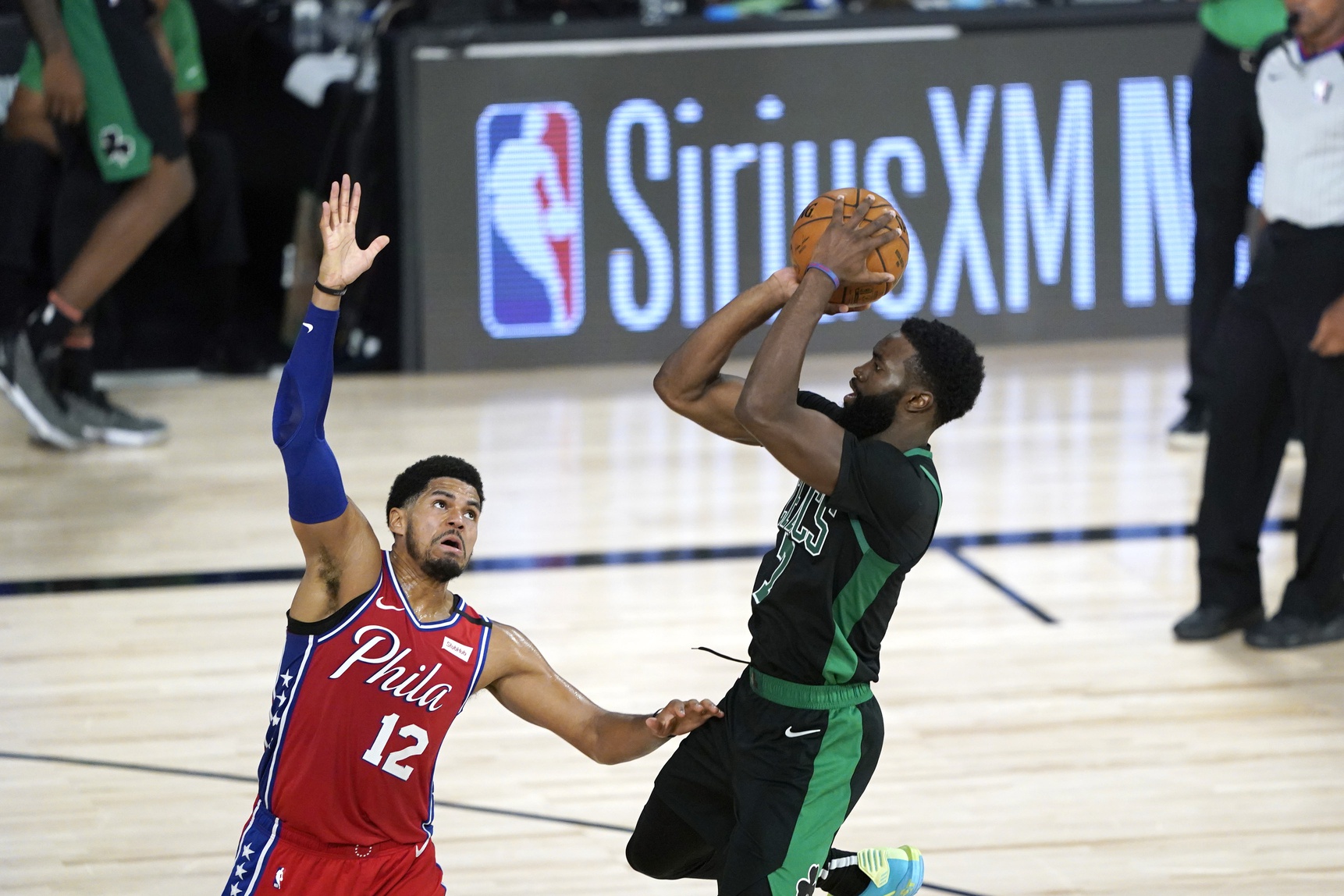 Your Morning Dump... Where the C's didn't look their best, but looked like veterans

Stevens is always careful to give the other team credit in moments like this, but Boston’s effort noticeably waned when things looked comfortable for them. After the Celtics took a 10 point lead with 3:08 to play, the Celtics watched the Sixers get three offensive rebounds in rapid succession to eat into the lead. Joel Embiid bull rushed his way to another offensive board but missed a tip-in that would have made it a two-point game with less than 30 seconds to go. The Sixers had 16 second chance points and Boston is lucky it wasn’t more.

“Hey look, this is the NBA, this is the playoffs, those guys over there are nowhere near slouches,” Kemba Walker said. “They’re professionals and they’re really good. A lot of it was them… Just making plays and taking advantage of our mistakes. We’re gonna go back and watch film and just learn how we can get better, especially when we take leads like that. We have to do better taking care of our leads.”

The results of last night’s game didn’t surprise me, and that’s both a bad thing and a good thing. But it’s mostly a good thing.

In terms of external factors, there’s almost no difference between the playoffs and the seeding games in the bubble. And as the playoffs progress, the home/road rhythm, the boost from home-court fans, all of that is going to be noticeable by its absence.

So, I wasn’t surprised that the Celtics had difficulty holding and extending leads. If you have a lead, this game probably felt like any of the seeding games that preceded it.

But if you’re behind, the game feels totally different. Not to say that these guys didn’t try their best to win the seeding games, but every one of these guys–including Marcus Smart–has a reserve that they tap into when the pressure’s on.

The Sixers used that reserve last night, and that extra effort–it’s far too early to call it ‘desperation’–made them work a bit harder all around.

Fortunately, two things came out of the game: 1) Boston was able to match the Sixers’ intensity long enough to secure the victory and 2) They took exactly the right lessons out of the game.

Boston is a veteran playoff squad, despite its youth, and their comments last night reflected that. They recognized, after the fact, and were not afraid to admit, that they need to ramp up the effort.

Page 2: Where Jaylen Brown is not just a ‘third option’

We are as guilty as anyone of suggesting Brown is a “third option” on a team where defenses must put a heavy emphasis on Jayson Tatum and Kemba Walker. Fortunately for the Celtics, Brown operates like the No. 1 option when he has to.

What’s becoming clear is that Brown will soon be an All-Star in this league and the playoff stage continues to bring out his best basketball.

“I can’t stress enough how important JB is and how special he is and how special we need him to be on a nightly basis,” said Tatum, the Ice to Jaylen’s Fire. “He’s definitely capable and we know we just have to play off each other. We do different things out there so we’re just playing to our strengths and being aggressive in the offense.”

Brown is still only 23 years old and every time someone attempts to put a ceiling on his potential, he launches the roof skyward. While all of us talking heads spend our days pondering Tatum’s slot in the NBA hierarchy, it’s Brown who keeps putting on his hard hat and reminding us all that Boston is moving forward with two young superstars.

In 2016 and 2017 the same three teams picked in the same order at the top of the NBA draft. The Sixers took Ben Simmons and Markelle Fultz, the Lakers took Brandon Ingram and Lonzo Ball.

And the Celtics took Jaylen Brown and Jayson Tatum.

This is what critics had to say at the time of the picks:

Consider the alternate timeline in which the Sixers never make the trade with the Celtics, stay at No. 3, and walk away from Thursday’s draft trying to talk themselves into the future pairing of Jayson Tatum and Ben Simmons. It would’ve been an awkward fit with an underwhelming ceiling, and it’d mean waiting at least one more year before we saw a Sixers team that made any sense.

Imagining what this draft almost became for the Sixers is the best way to appreciate what they got instead. Fultz is perfect next to Simmons. He’s a smooth combo guard who’s got the highest floor in the draft, and arguably the highest ceiling.

The D’Angelo Russell trade may not age well as the years pass and Russell evolves in Brooklyn, but dumping Mozgov is a win whether they sign LeBron or not. And rather than Russell spending the next several years getting side-eyed by everyone in the organization, a fresh start probably made sense. Still, it’s been a busy week for the Lakers and it’ll take time to decide what worked. If they eventually sign Paul George next summer, not trading for him tonight will look brilliant. If Lonzo is as good as expected, it won’t matter that they gave away Russell

I’m a little tired of trying to decode Danny Ainge’s master plan for all these assets. When they traded the No. 1 pick, I think a lot of people around the league assumed that it was a prelude to a bigger move. But they didn’t get Jimmy Butler on Thursday night, they didn’t get Kristaps Porzingis on Thursday afternoon, Paul George rumors came and went, and … Maybe they just really like Tatum? I’m not a huge fan of his game, but others are. And if anyone can find a way to take what he does well—iso scoring—and make it work at an elite level, it’s probably Brad Stevens.

It bears repeating that in both instances, the Sixers and Lakers took the path prescribed by talking heads and the Celtics did not. Heck, Danny Ainge wasn’t afraid to have his own fans boo his decision to keep the #3 pick in 2016.

And now here we are.

Tatum and Brown are an example of what happens when a smart team gets high draft picks.

These two guys are very good together and they are going to be very very good together. Tatum needs the spotlight on the court, Jaylen does not. Tatum needs to be the number one option, Jaylen does not. The two mesh well together, because you’re not often going to find a guy with Jaylen’s ability who has the sensibility to give the game what it needs instead of pushing to be ‘the guy’.

Brown has, to be honest, probably “sacrificed” more to Jayson Tatum than Terry Rozier ever did to Kyrie Irving, and with both Jays seemingly locked up with the C’s long-term, Jaylen will likely have to continue ‘standing in the shadows’ of Tatum. But I think he’s okay with that.

I was reading the liner notes from a Motown box set several years ago (long enough that box sets were still a thing), and there was an interview with one of the Funk Brothers–who recorded more number one hits than Elvis Presley, the Beach Boys and the Beatles combined. He was asked whether it bothered him that nobody knew who they were. He said something like, ‘it didn’t really matter, because we knew who we were.’

That’s the sense I get from Jaylen. He knows who he is, and he knows how good he is. Whether you know it or not isn’t all that important to him.

Finally: Checking in on Hayward

According to ESPN’s Adrian Wojnarowski, Hayward will undergo an MRI on his ankle Monday evening to determine the severity of the injury. Per the Boston Globe’s Gary Washburn, who is in the Disney World bubble, Hayward left the arena using crutches and wearing a walking boot.

And just like that the hospital Celtics are back.

I wonder how much of Hayward we’ll get to see during the playoffs. Soft tissue injuries to knees and ankles are managed far differently now than they were even ten years back. ‘Walking it off’ is no longer an option most of the time, so I’m prepared for Hayward to miss extended time.

I think the C’s with Hayward can win Banner 18. Without Hayward, the picture is so much murkier. They still have a fighter’s chance. It’s true that the starting lineup’s basketball IQ probably doesn’t drop much when Smart replaces him–but depth suddenly becomes an issue. You have to count on more production from the top five guys–more minutes, more points, more rebounds, more assists.

NBC Sports: Hayward’s health: Ankle injury the only bummer in Game 1 win | Blakely: Tatum, Brown have been there, done that | Blakely: C’s rise to the occasion, rally past Sixers