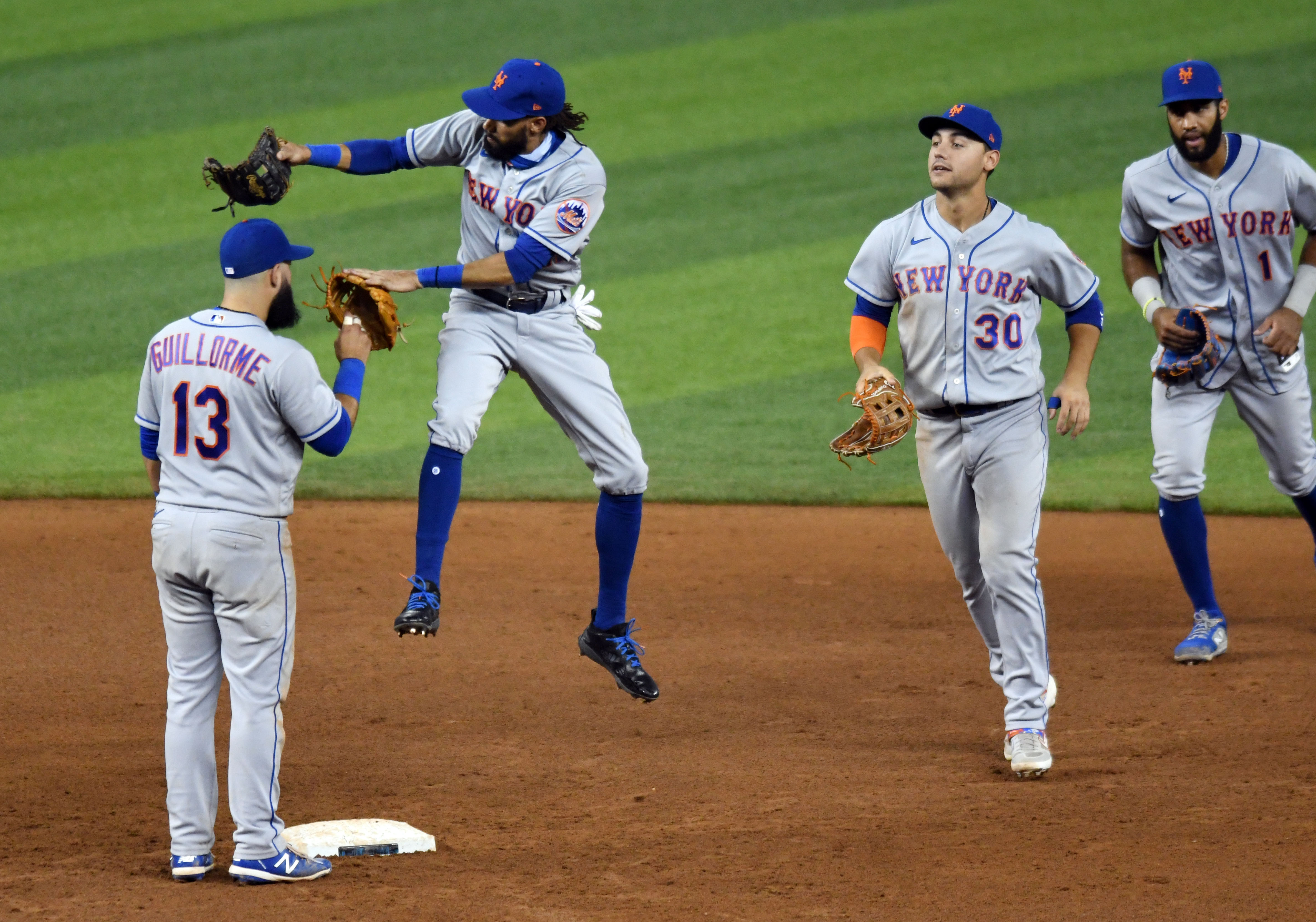 Well actually, it’s not. (If it was, I’d be sitting back and counting all that advertising money coming to me.) But Michael Conforto’s ninth inning home run to beat the Marlins was exactly what the Mets needed to freshen up the stench of what happened in the bottom of the 8th.

So there was talk before the bottom of the eighth as the Mets were building a 3-1 lead that the Mets were holding back Seth Lugo because, at least this is what Luis Rojas had hinted at, that Lugo was actually starting tomorrow! It’s  seismic shift in Mets thinking, as Lugo has been stellar out of the bullpen in recent seasons. But with the state of the rotation being what it is (outside of Jacob deGrom who returned from a stiff neck with a great six inning outing … giving up four hits and no walks with seven strikeouts), it’s apparent that the Mets are getting a little bit desperate, as this season, less than a month in, is nearly half over.

So the Mets go to the bottom of the 8th with a 3-1 lead, and Dellin Betances is trusted to get the Mets to the 9th. Betances gives up a single to Jesus Aguilar, then gets Corey Dickerson to pop up. Then gives up an 0-2 single to Matt Joyce (followed up some nasty pitches with a meatball, then gets Brian Anderson to ground out. All this is followed up with a walk to Francisco Cervelli to load the bases.

Now, this is the point where it is apparent that Betances is off, and Edwin Diaz is in the bullpen ready to go. Diaz has to be in the game at that point. Meanwhile, Seth Lugo is nowhere to be found because he’s starting tomorrow, and while we’re all panicking because Rojas is seemingly ready to sacrifice today for tomorrow, Steven Matz is probably on the bench thinking “do they not want me to start tomorrow that much that they’re willing to hold Seth Lugo out of a game that clearly needs him?”

Yes, Steven. Yes they are.

So Betances stays in and hits Eddy Alvarez with the second pitch he threw to make the score 3-2. Honestly, the way these decisions have backfired on the Mets lately, it could have been a whole lot worse. So one batter too late, Diaz comes in. Works the count to 3-2 on Logan Forsythe, then throws a non-competitive ball four to tie the game. Thankfully, he struck out Jonathan Villar swinging to end the inning.

So the top of the 9th comes and there are two quick outs. Everyone is sharpening their knives for Luis Rojas, including Gary Cohen who has sounded exasperated for about ten minutes to this point. Diaz is on the bench in a daze, and Matz is forlorn (guessing.) But Brandon Nimmo lined a single to left to set up Conforto’s blast … and make no mistake, it was a blast: a 425 foot dinger to center field where the big boys hit ’em. To do it in a big spot is special. Sitting at a .312 average and a .929 OPS tells me that he’s finally having that really special season.

Of course, his special season is a 60 game sprint in the middle of a hellhole year, but who’s keeping track at this point?

Diaz came back for the ninth and struck out the side, as expected, and the Mets got their 5-3 victory. Now, things get interesting. I mean, Seth Lugo is now officially slated to start tomorrow, with Rick Porcello going on Friday against the Yankees. With Matz in Le Chateau Bow Wow for the time being, it could be Robert Gsellman, Corey Oswalt, Drew Smith, Jared Hughes … hell, I’d believe that Matt Allan, who was just activated to the Brooklyn site, could make a start or two before this season is over. I mean, in this crazy season, anything is poss…