Valdes-Scantling, St. Brown Continue to Show Progress for the Packers at WR 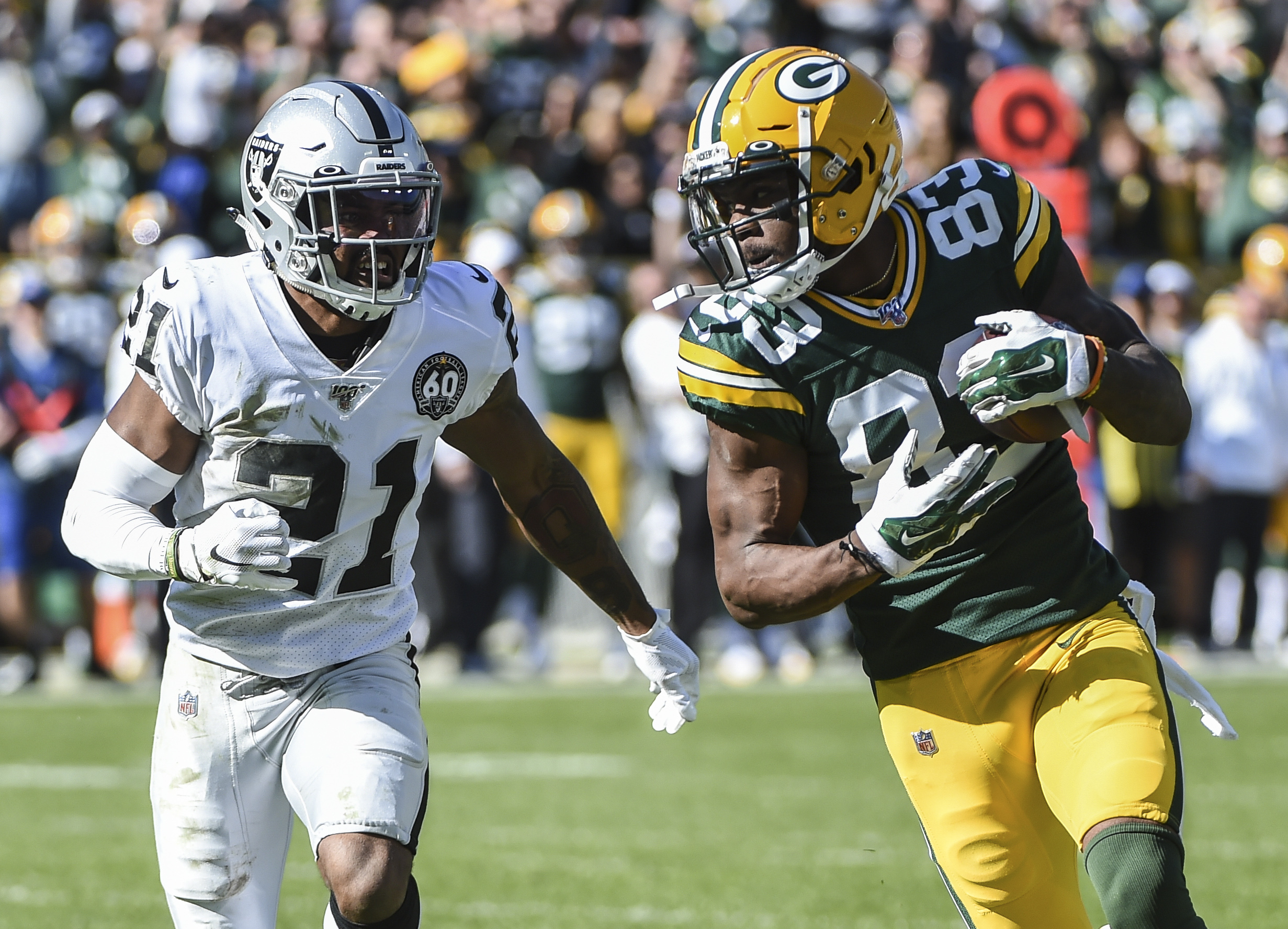 Valdes-Scantling, St. Brown Continue to Show Progress for the Packers at WR

It’s hardly a secret that the Green Bay Packers did not draft a wide receiver this year and that their free agent signee, Devin Funchess, opted out of the 2020 NFL season due to the Covid-19 pandemic. So, the team is clearly looking for improvement from some of their returning wide receivers to improve the position this year. Two of the returnees who are looking good early in training camp are Marquez Valdes-Scantling and Equanimeous St. Brown.

MVS and EQ were both drafted in 2018 and showed some promise as rookies. Both also had disappointing second seasons. Valdes-Scantling got off to a good start but suffered an ankle injury that slowed him down and limited his effectiveness. St. Brown was injured during the preseason and was placed on the season-ending injured reserve before the 2019 campaign even started. He missed the entire season and is now trying to get back to the promise he showed late in his rookie year.

“That was the first time in my career that I had ever really been injured before,” Valdes-Scantling admitted. “So just having to deal with that and just growing as a player, going from playing every snap to not playing as much, I’ve just got to learn from those things and fight through that adversity. So just learning how to get through that and still believe in myself and have my teammates still believe in me was kind of the big thing for me.”

Valdes-Scantling’s strong play in training camp is being noticed by the coaching staff.

“I’ve seen him stack two great practices back-to-back,” Head Coach Matt LaFleur told reporters. “That’s the challenge to him on a daily basis, he’s got to go out there and do it. I know he’s got the physical ability. He’s got great speed, and he can really scare a defense. But he’s got to be consistent with it. I’ve been proud of his effort but we’re going to continue to challenge him and try to put him in more and more positions to make plays for us.”

Valdes-Scantling has elite speed. He has been timed at 4.37 in the 40-yard dash at the scouting combine in 2018. He averaged an impressive 17.4-yards per catch last season and several long passes that resulted in big plays. MVS has recorded nine catches of 40 yards or more in his first two NFL seasons. In Week 7 against the Raiders, he gained 133 yards receiving on just two catches and that included a 74-yard touchdown reception from Aaron Rodgers in the fourth quarter.

One of the big issues for MVS is being more consistent on routes that are not designed to get him deep. If he can master those consistently, his own speed could open things up for him underneath and allow him to become a more reliable target for Rodgers in all situations.

LaFleur reinforced this when he said, “We need him (MVS) to be a consistent performer for us because he does have incredible speed and he scares the defense when he’s out on the field.”

St. Brown is also trying to get back into the swing of things after missing all last season due to injury. The lack of OTAs, minicamp and preseason games certainly won’t make it easier for the former Notre Dame star to get the reps he needs to find his groove.

St. Brown’s best game as a rookie came in his season finale against the New York Jets. The 6’5”, 214-pounder caught a career high five passes for 94 yards on five targets. He was a big part of the offense in the Packers 44-38 overtime win at the Meadowlands.

Missing an entire season was trying for St. Brown. This was the first time he had major surgery and was out of action for a year in his career. “Mentally at first, it was kind of tough but as I got on throughout the season, I got used to it and I just focused on my rehab mentally and physically,” he said.

LaFleur was pleased with what he’s seen from EQ during the offseason. “EQ is extremely intelligent,” the coach said. “I have a lot of confidence in not only his ability but his mind.”

Now, EQ must produce consistently on the field to earn regular playing time. The openings are certainly there with only Davante Adams solidly established as WR1 right now.

Both St. Brown and Valdes-Scantling know the opportunity is there. “We didn’t draft any wideouts so I think as a unit we need to step up.” St. Brown explained. “There’s a lot of eyes on us. I just want to focus in and show the coaches and staff that I’m healthy and I can run and I know my playbook.”

The Packers will need their young receivers to step up if the offense hopes to improve in 2020. Both MVS and EQ are determined to show they can help the team do that this season.