Inject This Moment Into My Veins 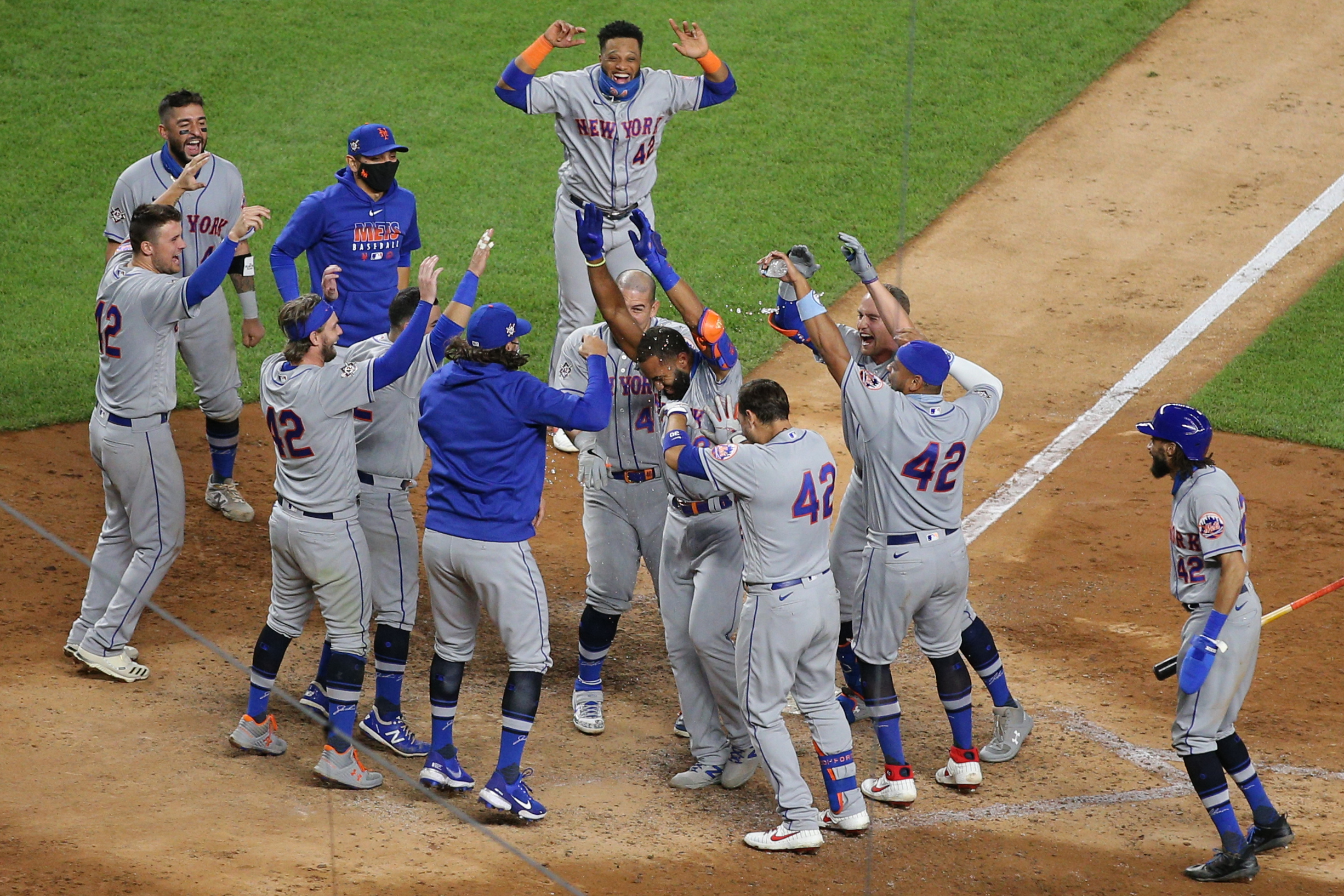 Inject This Moment Into My Veins

We’ll all never forget 2020. That’s unfortunate because there’s so much of 2020 I want singed from my memory. But the Mets walking off the Yankees in Yankee Stadium? For their seventh straight loss? I want my loved ones to play that on a loop at my wake.

Also from Elias: the last time a team had any sort of walk-off win in a visiting ballpark was Philadelphia on May 21, 1906 at Robison Field in St. Louis.

Let’s also not forget the at-bat that preceded it, with a 3-2 lead to lead off the inning: an eight pitch walk that Jeff McNeil worked out against Aroldis Chapman which preceded Amed Rosario’s pinch hitting appearance. McNeil is a free swinger, but he battled hard and showed a good eye when he needed to. Then, after Billy Hamilton stole second after he was picked off (he got a huge jump on Chapman who might have gotten away with a balk), Amed took a trash slider out of the yard to complete the sweep.

Okay, two things about how bizarre this was: One, poor Gary Cohen was so confused on it that he started to say “Amed Rosario gives the Mets the …” and you could tell that he was about to say lead, but with the dexterity of a lizard he caught himself and hit us with “win”. It was perfectly imperfect, and the only way anybody could have called a Mets walkoff home run at Yankee Stadium.

"He was asking for another ball after the pitch. It goes to show just how weird this season has been.”

Surprised he didn’t have a goofy smile on his face.

Now all of this came while Twitter was set on fire with the reports that Steve Cohen has won the sweepstakes to get to the final stage of exclusivity, now supposedly bidding all by himself, which I’m sure thrills Jeffy.

Regarding reports tonight that Steve Cohen has entered exclusive negotiations to buy the Mets:

Through a spokesman, Jeff Wilpon says the team "won't be giving details or updates on the timeline or process until we are prepared to make a public announcement."

Well if Jeffy ain’t talking, then forget about any subsequent leaks from “unnamed sources”. (I’ll let you figure that out on your own.)

Now remember kids: Don’t get excited about anything until the ink is dry on the contract. And even then, wait a week. You just don’t know.

This one is easy.

Seven inning games have a great rhythm, feel and urgency. Hopefully before too long MLB will seriously consider more of them, if not the elimination of 9 inning games. It just works.

No, Andy. Seven inning games are weird and I hope we never see them again in the major leagues after this zombie season. And I also hope that when we tie Fred, Jeffy, and Brodie together and push them off on a raft into the Atlantic Ocean, that you will be tethered to them, forced to watch every Steve Trachsel start on a loop until you get to England.