Pulled From The Fire 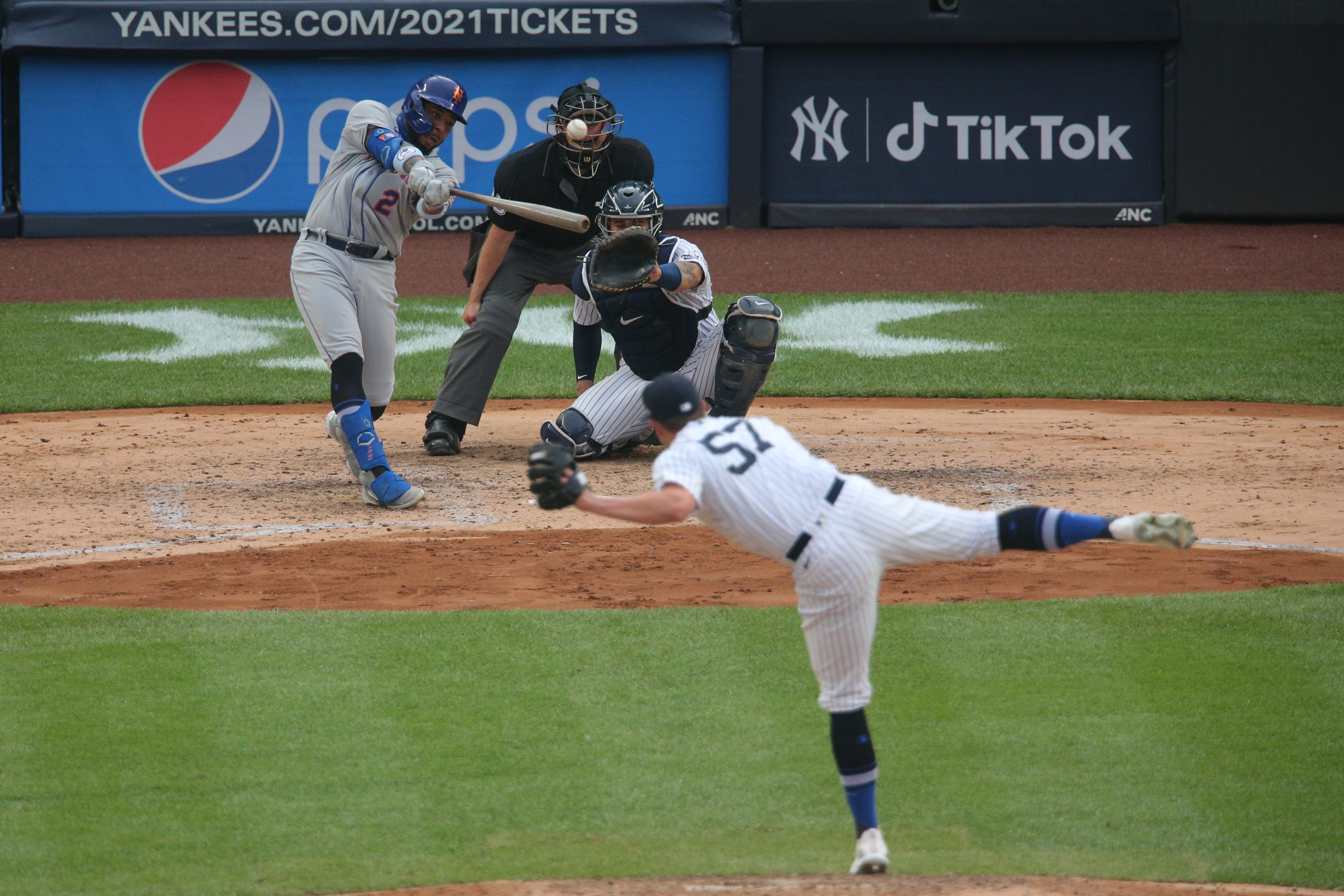 Pulled From The Fire

Full disclosure: I thought the game started at 5:10. Apparently the Mets did too.

From what I hear, Clint Frazier was a big factor in the early 4-0 Yankee lead with a two run HR, a double, and a run. Don’t know why it consistently takes both Giancarlo Stanton and Aaron Judge getting hurt to get this guy in the lineup, but that’s not my business.

Thankfully the Mets staged a thumping comeback in the 6th inning with home runs by Pete Alonso to tie it (still has a bit of a hitch in his swing but it got the job done today as he hit the ball to center field, which is a great sign), Dom Smith to give them the lead, and Jake Marisnick to remind us that 2020 is freaking weird, man. The big inning saved Michael Wacha and gave Walker Lockett his first victory of the season after throwing two scoreless innings in relief of Wacha. If you had Walker Lockett getting his first win of the season against the Yankees, then I hope you got good odds in Vegas.

Good chance this ends Lockett's time in the organization. He could get traded or claimed.

Thanks for beating the Yankees. Now go pitch somewhere else.

Speaking of weird, Edwin Diaz went 1-2-3 in the 7th to give the Mets a very, very satisfying 6-4 victory. As much as I still think the trade was an awful one, Diaz looks good this year, and I’m actually quite confident that he’ll be fine in the final inning this year, which would be nice with Seth Lugo going back to the starting rotation again. As for today, the early fireworks by Frazier could have put this team to sleep, but they battled back which is awesome to see. If the Mets don’t spit the bit from here on in, it’s the victory of the year.

So you remember this from last night, but if you don’t then let me refresh your memory:

Holy shit Rob Manfred is trying to force the Mets to pull a social justice awareness stunt tonight by having the players symbolically leave the field at 7:10 before returning an hour later to play at 8:10 even though the players don’t want to play tonight pic.twitter.com/4BJLaPUkoy

Okay, I’m going to give you the full disclosure that I have never been a fan of Brodie’s moves as general manager, and he has always struck me as somebody who isn’t the most genuine person in the world. But I’m not going to kill him for this. Quite frankly, I feel bad for him. Now, should he have knows the mic was hot? Well … there was no mic. And in this COVID world of Zoom cameras being hot, maybe Brodie shouldn’t be roasted too bad for having a conversation that he had a relatively solid belief was safe. Let’s be real: Brodie was doing what every single one of us have done in our lives: birch and moan about our bosses.

Frankly, if one of my bosses came up with the cockamamie idea of having the Mets stage a walkout for an hour, then I’d bitch about my bosses too.

But you can’t touch the gestapo, especially not the gestapo that has kept the Wilpons in power for all these years while the McCourts were forced to sell the Dodgers for what basically accounts to a lot of the same stuff. So Brodie had to apologize.

"I apologized to [Rob Manfred] publicly, I apologized to him on the phone. I recognize it was a disrespectful move. It was an emotional day, I want to support players" pic.twitter.com/Zg5vxpfUcq

Could have just left it here and it would have been fine, and we all would have forgotten about it.

Jeffy and Freddy had to put out statements.

First off, if you don’t want to read the whole thing, I’ll summarize:

Second, which poor intern did they get to write both statements that misspelled “Brodie” … TWICE!!! And both with a “Y” at the end!!!

Third, as much as I loved Brodie’s cover story that it was actually Jeffy’s idea (because I so want to believe that a terrible idea was Jeffy’s fault), it is so obvious that it was a cover story that was forced upon Brodie so that their buddy Brodie comes through unscathed. There are so many instances in life where embarrassing incidents are amplified by extra statements and extra layers of apologies. If Brodie’s apology was the last thing we heard on this, I honestly think it would have died.

(Apologies for not being able to find a topical John Belushi gif for this … kids, Google John Belushi.)

Wilpons had to be heard from so that they can show us how “inexcusable” it is to bitch about your bosses, even though everybody has done it. Poor Brodie will learn that everybody the Wilpons hire will meet the same fate. Oh sure, they love you at the opening press conference, but you do something to disrespect the family, and the friends of the family, then you will be excommunicated … or taken out to the lake. Whether it be by them, or by the commissioner.

The lesson here is that if you live in a snake den, don’t be surprised when the mongoose you invited starts causing problems.