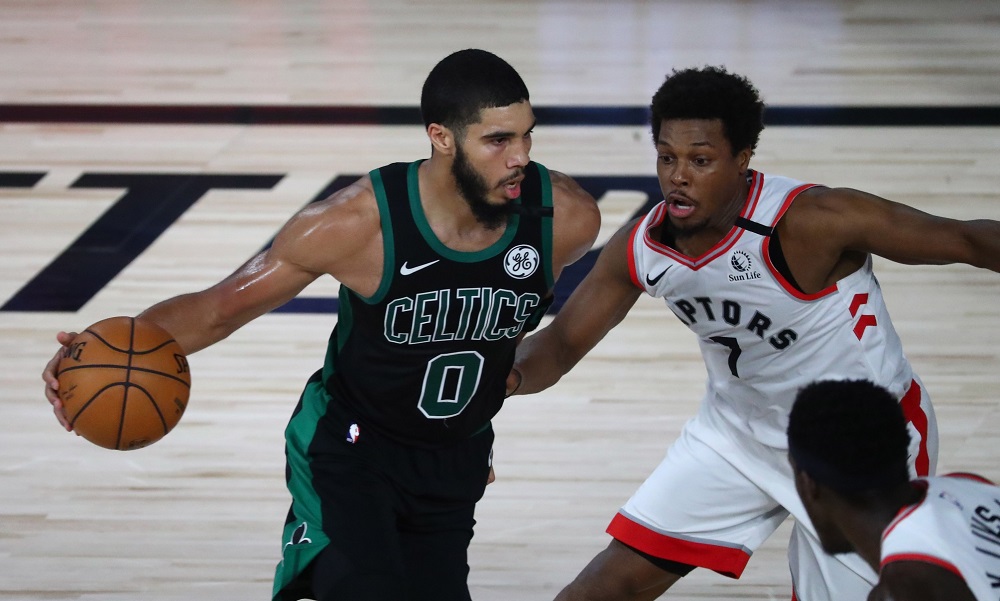 In the first-ever playoff meeting between the franchises, the Celtics had their way with the Raptors, 112-94, to take a 1-0 lead in the Eastern Conference semi-finals. The Celtics dominated all day, never trailing and leading by as much as 24. Boston shot 47.0% and held Toronto to 36.9%. The Cs also made 17 of 39 threes (Marcus Smart 5, Kemba Walker 4), while the Raps were just 10 of 40.

The defense kept Kyle Lowry, Pascal Siakam and Fred Van Vleet in check all day (combined 10 of 44 shooting). Only the Celtics’ maddening habits of missing layups and committing turnovers (22) kept this from being a 30- or 40-point massacre.

Raptors are 8-0 the last 2 seasons with James Williams officiating, via @NBARefStats

Celtics’ defense started aggressively, and it paid off with an 11-3 lead after 4 minutes.

#Celtics are blitzing VanVleet when he gets the ball frontcourt.

The cross matches in this series are going to be so interesting to watch. For example, Jayson Tatum and Kyle Lowry are currently guarding each other. Will be lots of fun little matchups within the games as this goes on.

Jayson with the assignment on Lowry again, see his utility chasing small guards off screens with rearview contest ability, and Jaylen big euro and off-hand finish in transition pic.twitter.com/sEWeayx1f4

However, Celts missed some early opportunities, including Jayson Tatum flubbing a layup and Jaylen Brown a dunk.

Celtics are off to a great start but they could also be up by 13 already.

Timelord was the first sub off the bench.

Value of Kemba's quick pop pull-up 3s off PnR. Serge has to play at the level of the screen and fears the pull-up, easy dunk for Rob pic.twitter.com/5sHNDzwNOb

Jaylen abused Pascal Siakam early – 9 points in 8 minutes, including a 4-point play that forced the Raptor wing to the bench with 3 fouls. Nick Nurse challenged this call and lost, then picked up a technical.

Timelord has made like a mistake a minute but is +10

Just a dominant start by the Cs.

Also it's an amazing thing on my timeline when the other team commits 11 first-quarter fouls that somehow the refs aren't cheating lol.

The 2nd quarter began poorly for Boston. The Raptors went to a zone defense, which helped them score 10 straight and get back in it at 39-30.

Brad Stevens with the timeout after watching Celtics open the quarter with 3 points in five minutes against Raps zone.

Daniel Theis turned it over several times against the zone, and yet…

Tatum started getting some shots to fall and the Cs regained control.

Kemba took a bump near his troublesome left knee, but he looked okay…

Good sign that Kemba stays in the game after appearing to favor the left knee prior to the time-out with 2:21 to play in the first half.

…and he ended the half in style.

If you told me Jayson Tatum and Jaylen Brown would be a combined 8 for 24 at halftime, I would have thought the Celtics would be in a world of pain. Instead, they're up 17. Raptors just 5 for 24 from deep, are probably due to make a few.

Here’s a fact that can make you either confident (it’s guaranteed!) or afraid (the law of averages!).

Here's a wild stat from @ESPNStatsInfo: Boston is 46-0 when leading by 15 or more points at halftime of a playoff game since the shot clock was introduced in the 1954-55 season.

Jaylen and Kemba began the 3rd by swishing left corner threes, and when Marcus hit from the right corner, the lead bulged to 68-46.

The Celtic are having fun right now.

Incredibly chemistry with this lineup

But Celtics fans know to be cautious.

Theis picked up his 4th foul, but Rob was ready again.

Celts continued to be on fire from 3.

The Celtics are now 7-of-10 from the corner threes.

And Timelord showed up again.

And there were stops.

How dominant have the #Celtics been today? We've got a little more than two minutes to play in the third quarter and EVERY SINGLE #Raptors starter is still in single digits scoring.

It was all looking good, except for the Celtics continuing to miss a ton of layups. Then Toronto had a 10-2 burst to close within 13. A buzzer-beater by Tatum restored the lead to 88-73.

man, what a tough shot by JT 🔥🔥🔥 pic.twitter.com/rC5Iagc3qv

The Raps wouldn’t quit. Lowry opened the 4th with an and-one and they were within 12. However, the Celts regrouped and got the lead back to 18, still playing defense.

Theis taking away that baseline from Lowry, holy shit that was good

Grant Williams played 5 minutes when the Raptors went to both Gasol and Ibaka at the same time. Beyond that, Brad Stevens has stuck with Brad Wanamaker, Robert Williams and Semi Ojeleye off the bench. And they've all held up so far.

In the end, the Raptors never got closer than a dozen points. With 8 minutes left, Ibaka showed his frustration with a flagrant.

Raptors totally botch coverage of the split cuts with what I would assume was supposed to be a switch. Slight upfake gets RHJ in the air, and as an extra precaution Romeo goes for the reverse to protect his finish pic.twitter.com/2Wdn4dYYxu

For the second straight season, the Celts have swept Round One and dominated the opener of Round Two. Last year, they then went on to lose four straight. So, take nothing for granted, but also remember this:

In 8 quarters in the bubble, the Celtics have outscored the Raptors by 40 points.