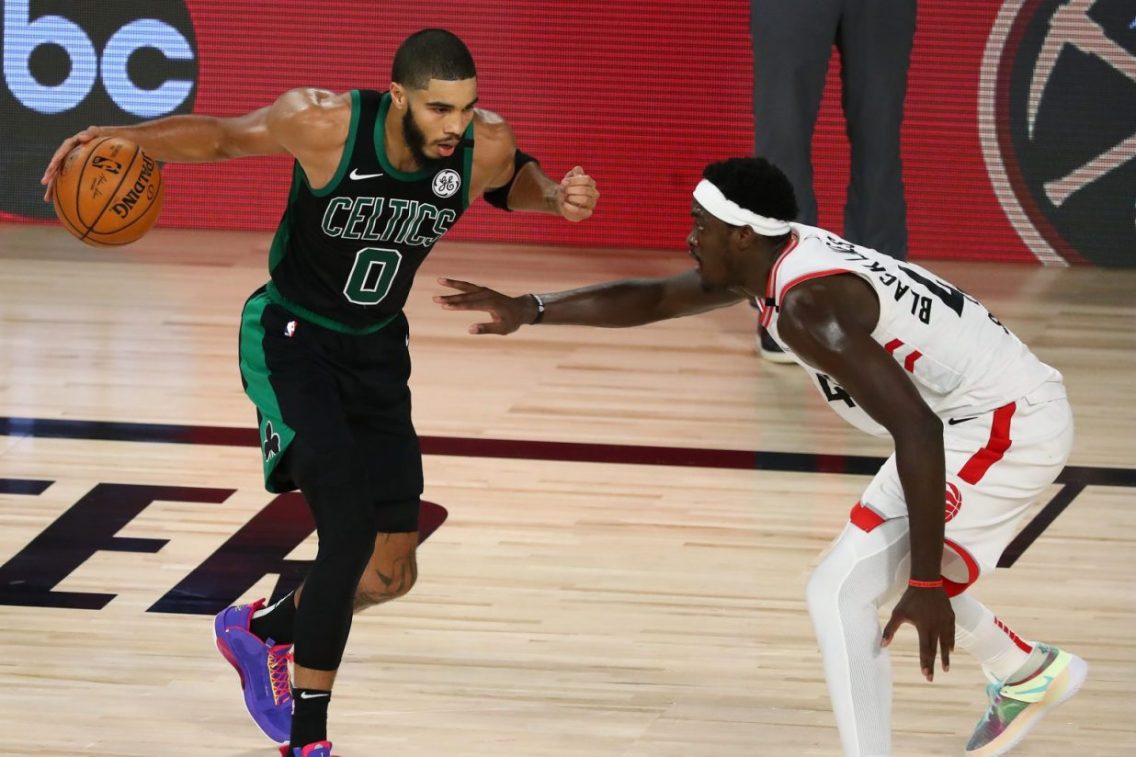 As my Red’s Army compatriot Rich Jensen noted in this morning’s Dump, Game 2 was the Celtics’ chance to establish real title-contention potential—through a 2-0 series lead on the defending champs. That’s exactly what they did. The Raptors fought much harder this time—19 lead changes, as opposed to zero in Game 1, and 12 ties—but couldn’t execute at the end.

Making a new playoff record for himself, Jayson Tatum was consistently devastating on both sides of the ball with 34-8-6 and a steal. Behind him was Marcus Smart, whose three-point tear in Q4 catalyzed a Cs squad that had sank into a quagmire the previous quarter: 19 points including 5 threes, plus 3 rebounds, an assist and 2 blocks. Jaylen had an almost casual 16-8-2-3-2 line, and while Kemba Walker started with wretched shooting, he heated up at the end, sealing the 102-99 Celtics victory with a dagger jumper and finishing with 17-6-4.

Now, an essential non sequitur before our tweet-based recap:

Could see this being useful pic.twitter.com/eYcEbfW5rc

Right off, it was clear the Celtics weren’t facing the walleyed version of the Raptors that screwed the pooch in Game 1, and naturally, Toronto’s arguably weakest link from that contest was a big part of it:

And Pascal has immediately come out really aggressive, attacking the paint and both scoring and dishing. Very encouraging start for Toronto both for him individually and the Raptors as a team. https://t.co/kCEpGywBYp

that stepback was a thing of beauty pic.twitter.com/xGXT8OSZ7n

Second counterpoint: We got a Rob Williams dunk after the first timeout, which makes sense. He had to stop his non-linear travel through space-time at the right moment to smash that basket.

That kick-started an 8-0 Cs run to counter the Raps’ 9-0 run. Then there was another Timelord dunk, one that ended in a rough-looking hard fall, but ultimately a false alarm:

Williams now rejoins the team on the bench and looks like he will return. #Celtics #Raptors

Williams finished with 11 points, 8 of which he got in under five minutes.

Nice Jaylen drop off to Rob cutting, who appears to be okay pic.twitter.com/U8uBssjhkI

Boston had difficulty containing Toronto’s three-point shooting in Q1. Fred VanVleet was the biggest problem in that regard, though OG Anunoby was no slouch either. Nevertheless, the frame ended in a 28-28 tie, due in large part to the Timelord.

"How I Broke My Ass and Became a Finals MVP: A TIMELORD Tale" — by Robert Williams The Third pic.twitter.com/H2zCM56fi2

The second quarter began with some trouble due to the bench disparity between the Raptors and Celtics: Toronto’s is rather deep, while Boston’s…isn’t.

Wanamaker got lucky, that was a flagrant

(The above being a response to Brad Wanamaker’s shouldering of Kyle Lowry in a non-malicious but irresponsible defensive attempt.)

Turnovers were also a notable Boston problem, as was an offensively out-of-sync Kemba, though neither hurt the team enough to keep the Cs from holding a narrow lead. (Walker eventually netted some points with a trip to the free-throw line.)

This is how you run a perfect fast break pic.twitter.com/qRUl4ymemF

Despite moments like that, Toronto was still thoroughly in the game at the half with Boston up 50-48.

The Raptors came out hard to start the second half, much as they did the first, and retook the lead for the first time since about the 4:00 mark of Q2. Marc Gasol, pretty quiet in this series, morphed temporarily back into the defensive monster we once knew him as, and Serge Ibaka joined the Raptors’ three-point barrage. On the other hand, Kemba finally got a field goal, and the Jays stayed awesome, so things stayed close.

Great use of the shot fake from Kemba!#NBAPlayoffs on ESPN pic.twitter.com/JOhp0TuXZM

Beautiful drop off by Jayson. Improvement as an interior passer from him is so crucial pic.twitter.com/vOfcQIgYit

Again, that stupid Raptors bench, though:

And a noble but failed effort at Marcus Smart to grift an offensive foul only further emboldened Toronto:

(Apologies to the Pats fan readers for the following:)

that call will probably be reversed and maybe should, but on the other hand nick nurse wears the world's dumbest non-TB12 branded hat, so

78-70 Toronto at the end of three frames—not catastrophic, given how badly the Cs played in the last few minutes of Q3.

Some would say that Hitting Shots will increase your chance to win the game.

Marcus Smart, sensing that tweet with his superhuman perception, proceeded to hoist and can a trio of consecutive three-pointers.

MARCUS SMART THE GREATEST SHOOTER OF ALL TIME

THE GREATEST TO EVER PLAY THE GAME OF BASKETBALL

"Doesn't make one until it matters."
That's what we like to call WINNING PLAYS #Celtics pic.twitter.com/y4czZi1Mbn

Toronto began cracking somewhat under the pressure, making the sort of dumb fouls and turnovers that were Boston’s sole province in that rotten third quarter, and also finally going cold on the offensive end…

…well, for a little bit. Then suddenly Boston barely had a lead again, and we were seeing prime Kyle Lowry foul-grifting (which you have to accept if you root for SMARF to do it, but still), and your humble scribe was getting nervous…

But with a Cardiac clutch jumper and some critical misses by the Raptors, that was a wrap.