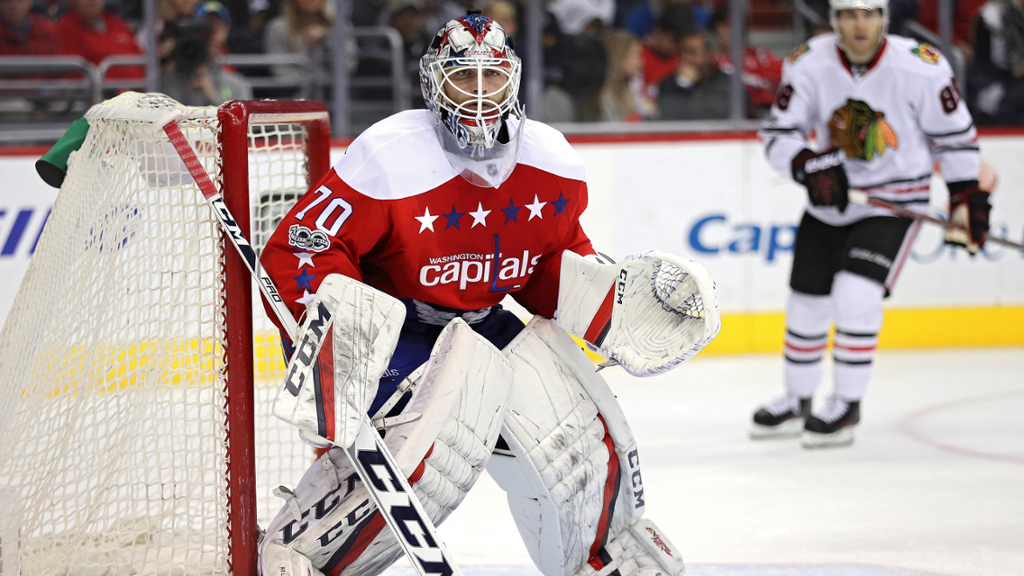 Ken Holland has a long history of trust in veteran players. That has been especially so when it comes to free agent additions. His entire tenure in Detroit, both in the pre-cap and cap eras, is littered with older free agents coming to town to supplement the core. Players like Mike Modano, Brett Hull, Dominik Hasek, Chris Osgood, Mike Green, and countless others were added under Holland’s watch.

In his first summer with the Edmonton Oilers, Holland added two veterans that fit the mold in Mike Smith and James Neal. He added another, Green, at the trade deadline. Will he add more in the coming off-season? The smart bet would be yes, Holland will.

One of the options is likely to be Braden Holtby. The veteran goaltender, from Western Canada, is almost certainly going to be leaving Washington in October.

Holtby served the Capitals well as their workhorse goaltender starting in 2012-13. He only played in 48 games this past season, however. That was his lowest total since 2013-14, when he also played 48 games for the Capitals. Holtby also, statistically, had the worst season of his career in 2019-20.

To make matters worse for Holtby, Ilya Samsonov had a strong rookie season, starting 22 games and posting a .913 save percentage. Samsonov also stopped 91% of the shots he saw at five-on-five, much better than Holtby’s mark on the season.

Considering Holtby is no longer the clear starter in Washington, carried a $6,100,000 cap hit last season and will be 31 when next season starts, there are reasons for the sides to split.

Samsonov is the guy is Washington moving forward. It wouldn’t be a surprise if that future started now.

Holtby, throughout his career, has been a consistent goaltender. In 468 career games, Holtby has a .916 career save percentage. His best season came back in 2016-17, when Holtby crafted a .925 save percentage and 2.07 GAA for a dominant Capitals team.

Did Holtby struggle because the Capitals struggled and gave up too many chances?  Did he just have a bad year? Was he battling an injury? Is Holtby just running out of gas now?

Outside of 2019-20, Holtby’s five-on-five numbers have consistently been good. That gives me reason to believe that perhaps 2019-20 was more of an outlier than an indication of what is to come.

Here’s a look at Holtby’s scouting report via The Sports Forecaster:

Owns a good glove hand. Has the size every National Hockey League club covets from the goaltending position. Handles the puck very well. Is very athletic in the crease area and plenty confident overall. Has enough stamina to play most games. Gets beat on his blocker side a little bit too much. Needs more work on his lateral mobility and general quickness in the crease area, since he can struggle with pucks at his feet. His rebound control is only average and could stand to improve.

I still believe that Holtby is a good starting goalie in the NHL. The biggest question, in my opinion, is how much longer will that be the case? Projecting Holtby as anything more than a two or three year stopgap in net is likely a mistake. That said, for 2020-21, Holtby should be a strong option to start 45-55 games at the NHL level.

If Holtby signed in Edmonton, he’d jump to the top of their depth chart as the starting goaltender. Down season aside, Holtby is a certain upgrade on Mike Smith.

Holtby may have cost himself a lot of money in 2019-20. A year ago, a long-term deal with real dollars was almost a certainty. Now? After a down season and in a flat-cap world, Holtby may need to take a ‘prove it’ deal to rebuild his value. That would benefit the Oilers in a big way if they had interest.

Fair value for Holtby is probably a two-year deal that pays him $4,000,000 per season. Unfortunately for the Oilers, that’s probably outside of their price range for a goalie this off-season.

Holtby is not the same goaltender that he was two or three seasons ago. He’s also clearly not the top option on the free agent market, even though his name value might indicate otherwise to teams.

On a short-term, affordable deal, Holtby would be worth a look. If he regains form, he could be a homerun signing. There is risk here, however, and the price is likely to simply be too much considering all of the factors we have discussed.

At the end of the day, Holtby would be worth it on a value contract. Anything more? The risk is likely too great.