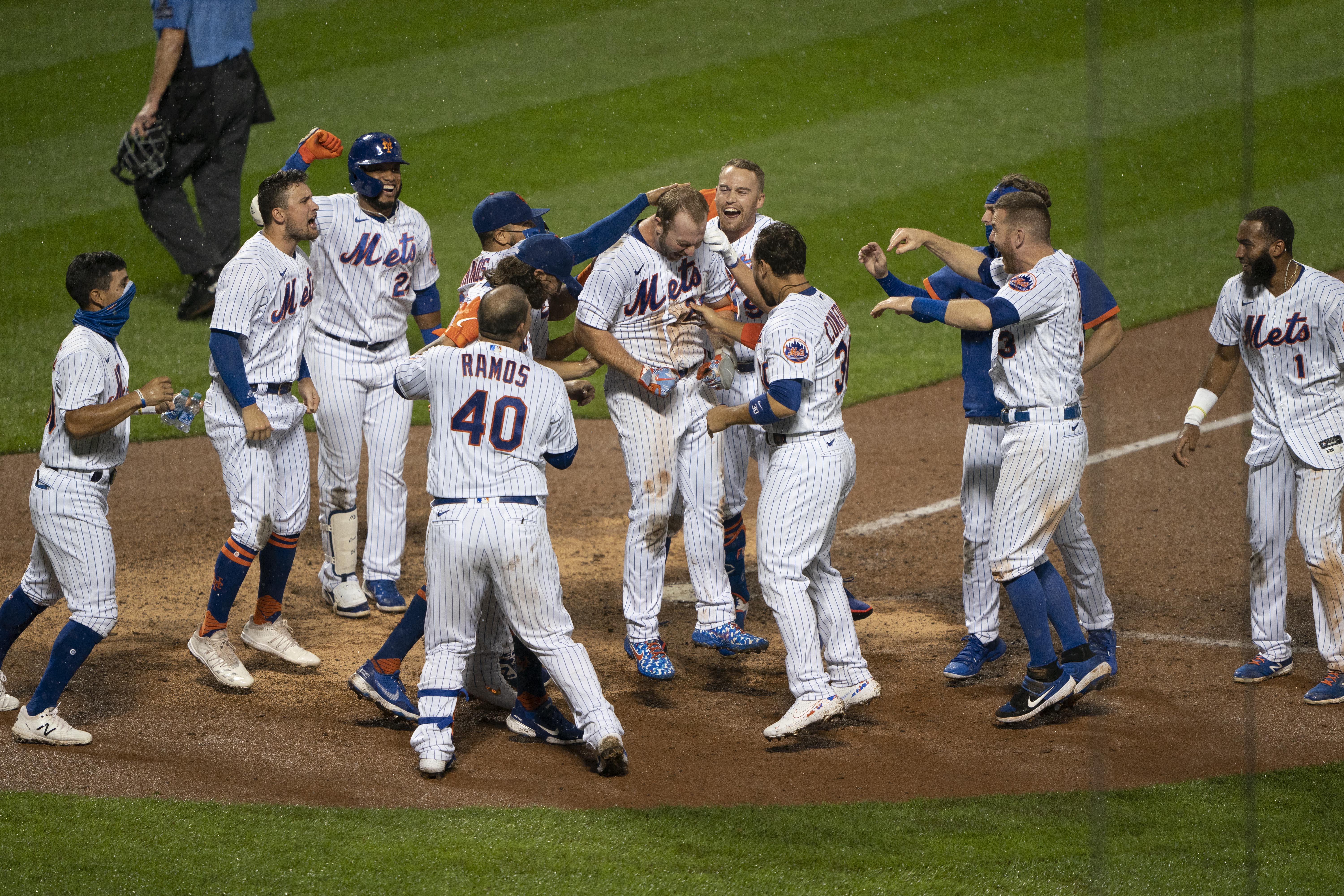 So after all of that, the Mets and Yankees finished right where they started.

Of all the Yankees/Mets series that have been played in the regular season, this group of six games was probably the most bizarre group of games ever played between the two rivals from different sides of the tracks. And it all ended with the two teams being even … both probably thinking they should have taken five of the six games.

Thursday’s game was a microcosm of lunacy. The Robert Gsellman experiment continued to bubble out of the test tube as he couldn’t get out of the second inning, giving up four runs in an inning and two thirds and leaving the bases loaded for Chasen Shreve, who got the biggest out of the game by getting Mike Ford to line out to center to stop the bleeding at 4-0. The Gsellman experiment should probably end here. It was a valiant effort by the Mets to think outside the box, but this was his fourth start and not only is Gsellman not stretching out, he’s regressing. The Mets have a perfectly good starter who is hanging out in the bullpen in David Peterson who might need to hightail it back to the rotation. Quite frankly, I don’t know if I trust Gsellman in a relief role much less the rotation.

Shreve held the Yankees scoreless long enough for the Mets to strike Gsellman from the pitching ledger and tie the game. Todd Frazier started with a solo home run in the second, and then helped by a Frazier leadoff double in the fourth off J.A. Happ (who the Mets could barely touch at Yankee Stadium), the Mets turned four two-out hits by Jake Marisnick, Amed Rosario, Robinson Chirinos and Jeff McNeil into three runs to even the score. Jeurys Familia then kept the Yankees at arm’s length with two scoreless innings of his own. 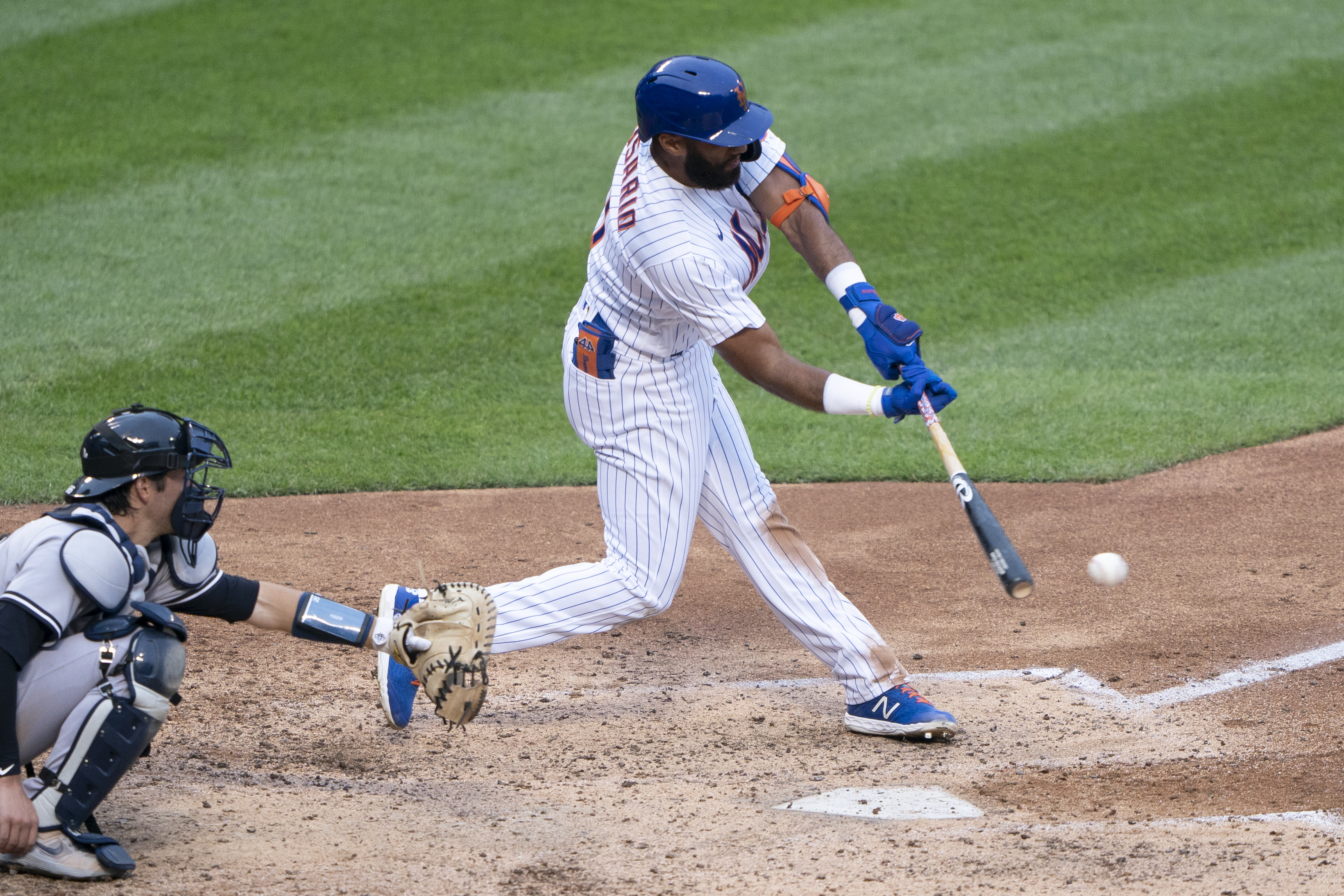 Then Miguel Castro made his debut in the 7th, and if this was a glimpse into things to come then we’re in for a treat. He threw 15 strikes out of 31 pitches in the 7th, and gave up two singles with two outs (one of them somehow finding a hole between Pete Alonso’s glove and the foul line with Alonso in the standing position) to give the Yankees a 6-4 lead. Castro had a 5.02 ERA and 1.36 WHIP lifetime against the Yanks, but hey … let’s throw him in against the heart of the order. Super.

People have opined that Castro is Edwin Diaz lite. I’ll go a step further: This is going to be like having Dixie Carter and Mary Ann Mobley in the same clubhouse. Castro has snuck into Diaz’s house and started filming videos calling himself “The New Edwin Diaz“. You gotta have a killer slider! T.N.E.D. Killer Slider … and that’s when Jake from State Farm shows up. Except in this case, it’s Justin Wilson and he just makes things worse by giving up a run in the 8th to make it 7-4 Yankees.

But the Mets crawled back yet again in the 8th thanks to another rally where they smacked Zach Britton around. Frazier kicked it off again with a one out double, and it culminated in Amed Rosario with another big hit, a two run single to make it 7-6 to give themselves one last chance in the ninth. After the real Edwin Diaz worked around a leadoff walk to set the Yankees down in that ninth inning, McNeil led off the bottom of the ninth with a walk against Aroldis Chapman. At that moment you knew you that the Mets were going to get the diminished Chapman and not the dominant Chapman. 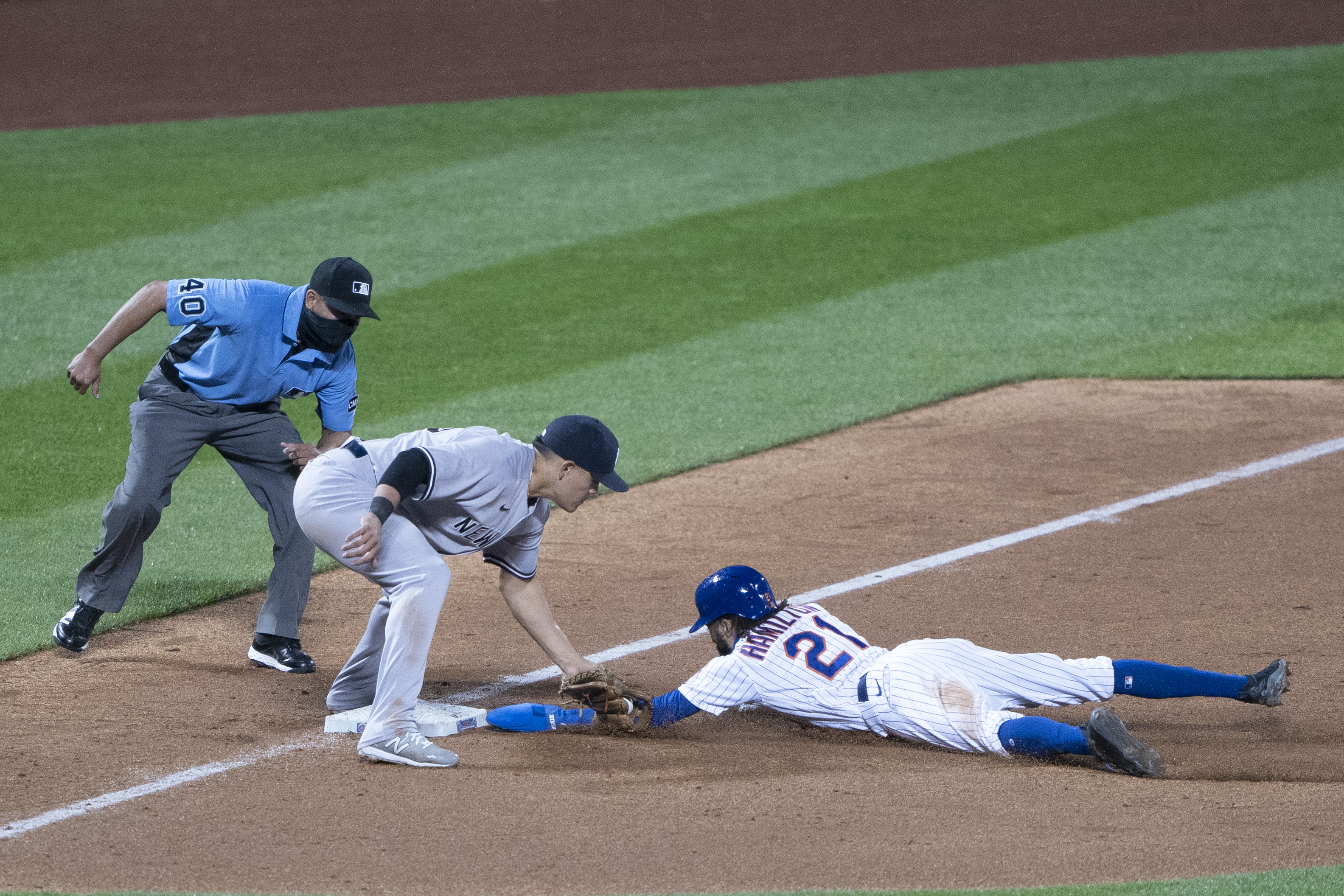 Billy Hamilton, pinch running for McNeil, almost derailed the whole plan. He was picked off second base but was fortunate that a balk was called on Chapman (Hamilton might have been safe anyway.) Then, once again thinking he can hit the same roulette number twice in a row, tried to steal third with nobody out. He was out by a couple of inches, but that’s enough. Instead of using his speed intelligently and realizing that a base hit can bring him home easily, he tries to do too much and gets himself in trouble.

The good news is that J.D Davis followed up with a monster home run to the batter’s eye in center to tie the game. Perhaps it would have won the game if Hamilton didn’t think he was Rickey Henderson. Or, perhaps Chapman doesn’t give J. Dingers an Insomnia Cookie down the middle of the plate if Hamilton stays put at second. I don’t know … I’m not a baker. But in any event, the game was tied and was going to the 10th.

Tyler Wade was the designated go-ahead run at second base for the Yankees, and thankfully he played the role of “Met who usually vapor locks in situations like these”, when he took off for third on a line drive to Michael Conforto and was easily doubled off the base. It made Diaz’s life easy in that tenth inning as he got three outs by pitching to two batters. Extra runners are fun, aren’t they?

The Mets didn’t really need the extra runner, although it did give Pete Alonso a free RBI as he sent an Albert Abreu pitch to the hinterlands for a leadoff two run homer in the 10th to give the Mets a 9-7 win and close the book on another Subway Series. Three games lost by the Mets in the final at-bat made easier by two games blown by Chapman, and all things now are as they were then, except that you … and Todd Frazier and Robinson Chirino and Miguel Castro … are there.

With apologies to Samuel L. Jackson, I am sick and tired of these mother f***ing umpires on this mother f***ing planet calling strikes on check swings when the batter’s only intent is to survive. Chapman threw an up and in fastball in the 9th to Dom Smith who jackknifed out of the way and … if his bat crossed the hitting plane, it was while it was in the air after Smith was trying to save his head from contact with a missile. 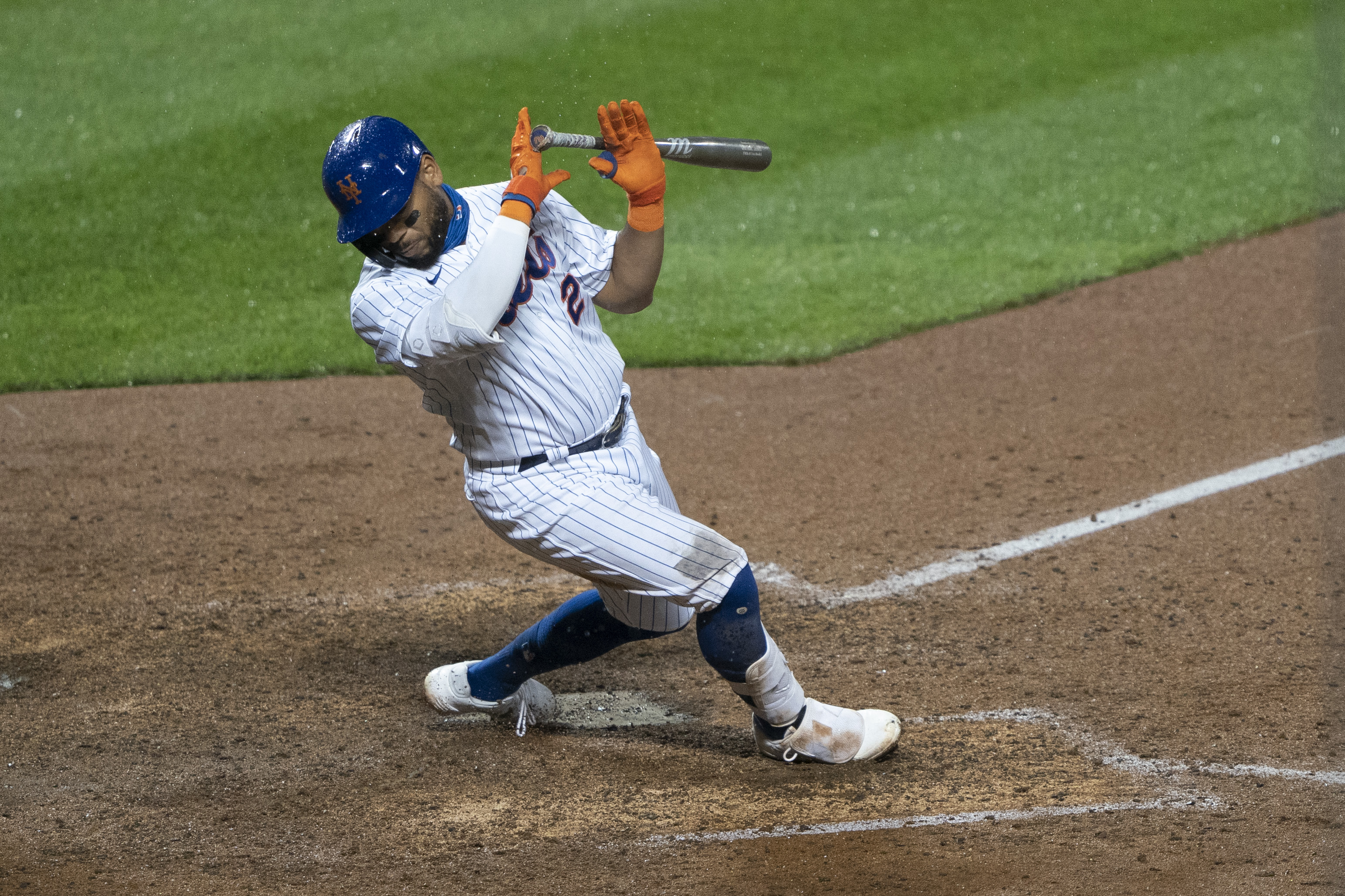 I mean, look at the picture! How is Smith supposed to worry about controlling the bat when he’s falling to the ground? The ball was in the catcher’s mitt well before the bat crossed the plane. There is no way Smith is trying to get a base hit on a fastball at his head. But Roberto Ortiz called this a swing!!! And while it didn’t matter in the grand scheme of things, it turned a 2-1 count into a 1-2 count and Smith had no chance. Robinson Cano got burned by this type of call twice last season, and this was even more egregious than either of those. Can these umpires add a sprinkle of common sense to the rulebook here?

All of this nonsense was set with the backdrop of remembering the icon of the franchise, Tom Seaver. I gotta say that while the moment of silence and the players tipping their caps to the number 41 in left field were nice, the players putting dirt on their right knees to simulate Seaver’s “drop and drive” was a really special touch. Whoever thought of that … just gets it.