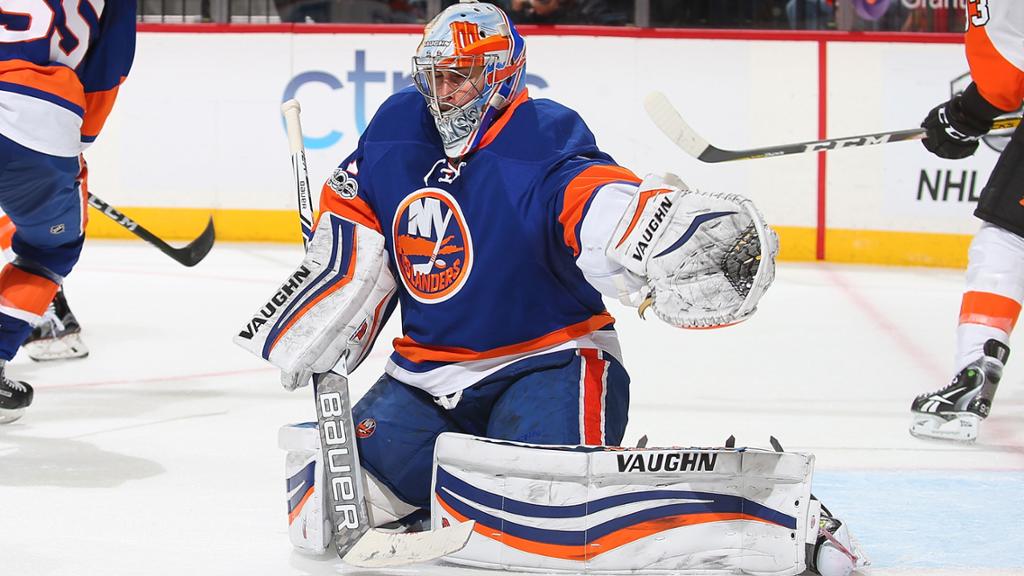 We can learn a lot about the future by looking at the past. The past of GM Ken Holland tells us that goaltending isn’t a position of priority in procurement for the veteran manager. Why? Holland doesn’t believe there is much difference between goalies once you get beyond the top tier.

Whether you agree or not, Holland did run a tandem of Mikko Koskinen and Mike Smith in 2019-20. He’d be comfortable running the same duo in 2020-21 if the situation called for it. Ideally, he’d like to run a tandem with Koskinen and a veteran again in 2020-21 barring an unforeseen player entering the market.

It could be Smith, or it could be someone like Thomas Greiss. The veteran German goalie is expected to hit the free agent market in October.

The Islanders lost Robin Lehner to free agency last summer, but inked veteran Semyon Varlamov to a deal worth $5,000,000 per season. It’s hard to imagine the Islanders moving on after just one season, especially considering Varlamov has been sensational for them in the playoffs.

On top of that, top prospect Ilya Sorokin has finally arrived in North America and is expected to make the NHL roster next season. Unless the Islanders invest three roster spots in goaltending, which is unlikely, Greiss will be the odd man out.

Greiss has been pretty consistent as a tandem goalie during the entire course of his career. Over the course of his five seasons with the Islanders, his only poor season was 2017-18. That year, Greiss struggled to an .892 save percentage in 27 total appearances.

This past season, Greiss actually saw his workload decrease thanks to the arrival of Varlamov. He still posted strong numbers. Over the course of 31 total appearances (28 starts), Greiss went 16-9-4 with a .913 save percentage and a 2.74 GAA. He stopped 2.78 goals above average, and had a .536 quality start percentage. That’s exactly league average.

One area of Greiss’ game worth looking at is his five-on-five save percentage. It has been up and down the last three seasons. He started off with two terrific seasons at five-on-five with the Islanders, posting save percentages of .934 (2015-16) and .920 (2016-17) in the discipline.

Greiss has been a good bet to play between 35 and 45 games since joining the Islanders in the summer of 2015. The numbers, however, have become inconsistent in the last two seasons.

Here’s a look at Greiss’ scouting report via The Sports Forecaster:

Has excellent puck-stopping ability, as well as the ideal demeanor for the goaltending position. Honed his craft well in Europe, and has usually put up very good numbers at lower levels. Is still trying to prove he can handle a bigger workload in the National Hockey League (and the jury is still out at this point). Needs to avoid giving up bad goals at the wrong time, too.

Greiss is what he is at this stage of his career. He’s a solid tandem goalie who can play roughly half of a team’s games and give them a chance to win most nights. He’s a good NHL goalie, but he isn’t a starter.

In Edmonton, Greiss would be an upgrade on Mike Smith. His 2019-20 season, however, falls short of Koskinen’s. Greiss would be a 1B goaltender should he sign with the Oilers. That’s a really good fit for him.

Greiss signed a new three-year contract extension with the Islanders on January 30th, 2017. The deal carried an AAV of $3,333,333 and did not contain any bonus money or trade protection.

At 34, it’s hard to imagine Greiss commanding any real term. At most, Greiss is likely to get a two-year deal, which walks him to free agency at 36.

In terms of how much he’ll make, that’s tricky. Greiss won’t break the bank, but he also won’t exactly be a “value” contract. I could see two years at $3,500,000 per season for Greiss. That’s within the Oilers’ price range.

In all likelihood, the Edmonton Oilers are not going to break the bank on a goaltender this October. Mikko Koskinen is almost certainly going to be back for a third season, and odds are Mike Smith will walk as a free agent or, potentially, retire.

Odds are, Holland is going to want a veteran goaltender to take 35-45 games off of Koskinen’s plate. There are a few options that can fill that role, at an affordable price, on the free agent market. Greiss is one of them.

Expect to see some sort of interest from the Oilers in Greiss.