It was announced late afternoon that the Penguins have re-signed defenseman Juuso Riikola to a two-year deal with an annual cap hit of $1.15 million.

The Penguins have re-signed defenseman Juuso Riikola to a two-year contract.

The deal runs through the 2021.22 campaign and carries an average annual value of $1.15 million.

Riikola, who turns 27 in November, played in 73 games for the Penguins over the past two seasons. He scored three times and added six assists.

Riikola is a smooth skater that has solid offensive instincts and loves to throw hip-checks when he’s defending his own blueline.

Riikola, though in limited minutes this season, had incredible defensive impacts across the board. In fact, they were among the league’s best. 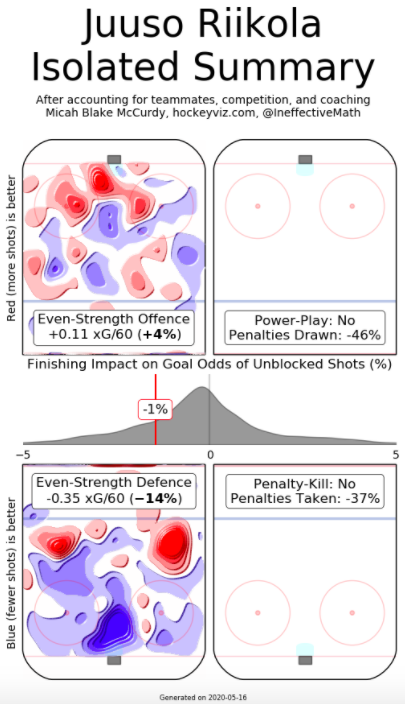 This is how Riikola stacked up against all NHL defensemen with at least 400 minutes at 5v5 this season, via Evolving Hockey:

None of this suggests Riikola is a top-pairing guy that can shut down the likes of Nathan Mackinnon and Connor McDavid. Rather, he excels in a third-pairing role and can hop up to the second pairing if needed.

I believe Riikola’s game complements the Penguins’ style of play in a significant way.

He’s an okay guy to have at the point on the second power play unit. Two of his three career goals came from point slap shots with the man advantage.

Riikola didn’t see any time on the penalty kill this season. Despite his incredible defensive impacts, I don’t know that he’d be a great killer, though I do think he could get by. It would certainly be better than having Jack Johnson out there.

As of right now the Penguins employ five left-handed defensemen:

Something’s gotta give as I don’t figure they plan to play any of these guys on the right side. Is a trade in the works?

Matt Murray’s name has been swirling in trade rumors and it seems imminent that he will be dealt. I imagine one of the five defensemen will be headed out of town with him.