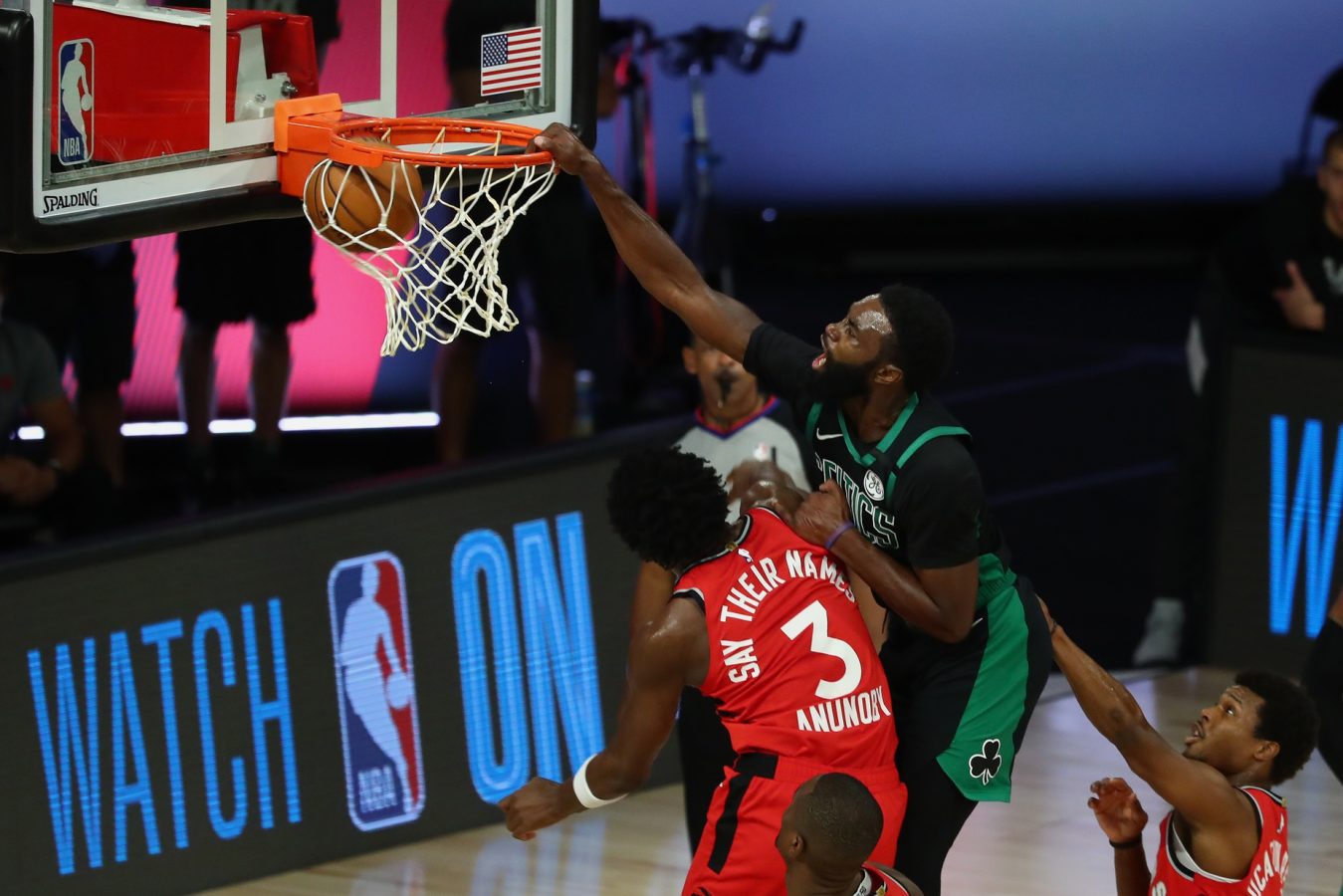 In the wake of an unpredictable, almost impossible Game 3 loss and an…absolutely infuriating turnover- and missed-shot-laden defeat in Game 4, it was high time for the Celtics to regain the mantle of intensity from Game 1 (and substantial portions of Games 2 and 3). They did that, and then some, in a ferocious 111-89 beatdown that often had the teams separated by far more than 22 points—it reached as high as 30.

Now, a non sequitur before our Twitter-centric rundown of events:

Apologies for the toiletmouth but this, and the following tweet, seemed appropriate after Jaylen’s rough outing last game:

JAYLENNNNNNNNN SAID FUCK THE HATERS RIGHT OFF THE BAT

He did indeed, with a smooth-motion triple off the dribble. The Celtics in general looked much better to start this game than they had last time around, on both ends of the floor and especially in transition. (Which is good, because it means beating the Raptors at their own game.)

Honestly, the worst thing I think I could say about the Celtics Q1 performance is they still aren’t guarding OG Anunoby for reasons I can’t imagine. But whatever—they ended the frame with a strong 25-11 lead.

Boston's defence has been really good, but this Raps offence is brutal to watch. Too much dribbling, too little movement, etc.

That was indeed the problem for Toronto through much of the first half. Although their offense picked up a tad early in Q2, it didn’t last under the clamps of Boston’s defense. They were stealing everything they could, crowding the three-point line and painted area alike.

Offensively, Boston wouldn’t relent, forcing dumb fouls out of Toronto (which got the Celtics into the bonus at around 5:30 of Q2), scoring from every area of the court and generally making the reigning champs’ own justly vaunted defense look either flabbergasted or frustrated the whole rest of the half.

Kemba finds Marcus for the throw down 💪🏾 pic.twitter.com/3z0hLQQEbD

And just to really rub it in, Kemba beat the buzzer once again in the most excellently rude way possible:

Kemba and buzzers are our favorite celebrity couple #Celtics pic.twitter.com/M8kWMJp6u4

Kemba Walker buries a floater at the buzzer, and it's 62-35 Boston at halftime. Jaylen Brown has 16 points to lead the Celtics, while the Raptors went just 13-for-43 from the field and 4-for-18 from 3. Ugly, ugly half for Toronto.

Five Celtics have reached double-figures in scoring and we've only just begun the third quarter.

It wasn’t a big surprise that the Raptors came out with greater verve to start Q3, with Siakam going on a solo 8-point run and VanVleet finally getting a few shots to fall. And the Celtics didn’t handle it well right away—but they quickly regrouped and kept their massive lead from being cut down much. In many ways they were coasting, and it didn’t matter.

his stepback is money pic.twitter.com/DewKRxb2E1

Although Brad Stevens still had various combinations of Brown, Tatum and Walker in the game during the 4th, most everyone was pretty sure this game was wrapped up.

Yeah, I don’t remember the other broadcaster’s name and I frankly am unlikely to look it up. This game, with 6:17 on the clock, had the Celtics up 95-73 and in the bonus. Not even the mild coasting was likely to majorly impugn the lead: Toronto’s bench, while deep, is also full of guys who will make dumb fouls and other foolish decisions (Chris Boucher’s goaltend on Theis, Rondae Hollis-Jefferson’s clumsy reach-in against Kemba, etc). The early damage was simply far too much for the Raptors to overcome.

Tremont Waters enters the game and promptly dishes out a filthy assist to Grant Williams. pic.twitter.com/YRMSnmUOO6