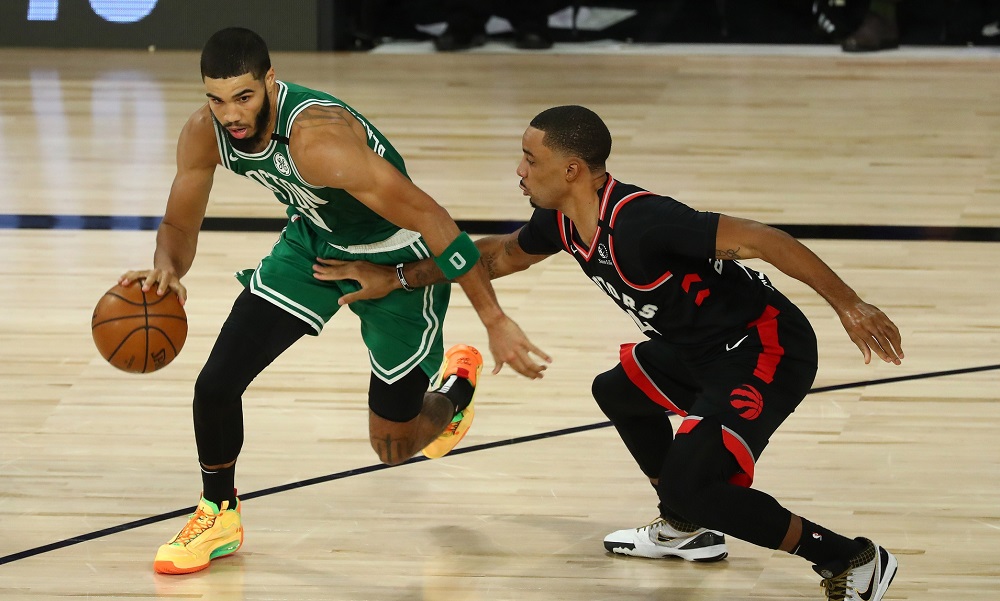 Rapid Recap is designed for the busiest of Celtics fans. Whether you can’t stay awake to read 10 paragraphs or your hangover is just too much, Rapid Recap tells the timeline of the game in only a minute or two. (This recap isn’t exactly rapid, but we had good reasons.)

The Celtics were one win away from the Eastern Conference Finals, and after 58 minutes of physical, hotly contested basketball, they still are. The Raptors wouldn’t die, prevailing 125-122 in double overtime. It was a wild, emotional game in which all five Celtics starters and four Raptors starters played 47 or more exhausting minutes.

Kyle Lowry and Norman Powell were clutch for Toronto, while Jaylen Brown, Jayson Tatum, Marcus Smart and Daniel Theis were great for the Celtics. Unfortunately, Kemba Walker was 2 for 11 and just 5 points.

One thing to know up front:

This has been a hell of a game. Two teams just throwing haymakers back and forth.

The early minutes were all about Marcus, as he picked up 2 personals…

And a third 3 from Marcus Smart #Celtics

Marcus Smart: 3-point specialist is back

Lowry committed what could’ve been a flagrant foul, but the refs didn’t bother to check. Jaylen essentially told Lowry to piss off, then completed the 3-point play.

Lowry got away with other stuff, too.

both announcers thought this was a good call https://t.co/7Y2xNXE6Ve

Lowry with the best Grift of the series

Not a great first quarter, but the Cs were up.

…and the Celtics lead by 4 after one.

it all starts on defense pic.twitter.com/WYeVs3xqkE

The Celtics haven't had more than seven offensive rebounds through five games vs. Toronto.

They have eight after one quarter tonight.

Celts got the lead up to 12, thanks to back-to-back treys by – yes – Brad Wanamaker.

Then Ibaka hit two straight triples to cut the lead in half. Then he hit another to cut it to 5.

Celtics might just need to go Box-1 on Ibaka.

Tatum finally made a three to make it 50-40, but Toronto closed on an 8-2 run. Incredibly, Jayson had just 8 points (although 9 rebounds and 4 assists) and Kemba was scoreless! Thank goodness for Jaylen.

Jaylen is just too smooth 😎 pic.twitter.com/nX8nwOvNeU

Jaylen Brown has 21 points in the first half of Game 6 as the Celtics lead the Raptors 52 to 48.

The Celtics are 15-0 this season when Brown scores 25 points. That is the best win percentage of any player in the NBA this season (min. 10 games) in 25-point games. pic.twitter.com/4cPYotRq4R

Gasol opened the 3rd by draining his first triple of the series, drawing the Raps to within 52-51. Smart answered with his 4th three, then Van Vleet also made a trey, his first in 7 tries. There was good and bad happening.

Fourth foul on Jaylen as he charges into Lowry #Celtics #Raptors

Kemba finally got on the board.

Spectacular offensive possession by Kemba. Blows by Siakam in isolation, kickout, relocates to the corner for the wide open 3. Kemba's relocation in the bubble has been great pic.twitter.com/HcoQRWA1SB

Then some bullshit happened when Smart got under Van Vleet’s foot on a 3-point attempt and was called for a flagrant. FVV made all 3 FTs, then canned a corner triple.

That was a six-point possession. Huge swing.

It continued with Van Vleet making another three and Gasol, too, for a 70-64 Raptors lead.

In the mix was a sequence where Tatum drove and bumped Van Vleet, who was crowding him from the side. Offensive foul, negating a hoop. The next Raptors possession saw Siakam do almost exactly the same to Grant Williams – basket good, and-one.

With Tony Brothers taking control of this game wouldn’t it be great to see Brad Stevens show some emotion? pic.twitter.com/SvAnfZpPcG

Celts regrouped behind threes by Jayson and Grant, but it was another nightmare 3rd quarter, outscored 33-25. Jaylen was scoreless in the period.

JAYSON TATUM FOR THE LEAD pic.twitter.com/3iTuz0D54F

Lowry, for all his flopping, is still a great player. He bombed two straight threes to retake the lead, 94-89. Smart responded with a driving and-one.

Just when you think you can't love Marcus Smart anymore than you do.. he proves you wrong.

Raptors are not giving up their lead, they're keeping their season alive…

The Celtics continued to fight and tied the game at 98 on a Theis dunk from a Smart feed, 98-all with 2 minutes left. It stayed that way until the Celts’ final possession. Kemba drove to the rim – and missed. He got fouled, but (shrug emoji).

Explain to me how this is not a foul. pic.twitter.com/caQnCTFmRd

Incredibly, a foul was called on the last-second Toronto inbounds play, as Tatum went up to keep Anunoby from catching a lob. Fortunately, the Cs had a foul to give. One more inbounds play was stopped and it was overtime. Toronto didn’t score for the final 4 minutes.

Wow. Just wow. The same ref who let all that contact go on Kemba called Tatum for that foul.

in a four-second span:

1) The Kemba non-foul call
2) Giving the Raptors the timeout instead of jump ball
3) The foul on OG
4) Which was not in the act of shooting?
5) It took 1.3 seconds off the clock???

Only for Norm to respond with a 3. The haymakers continue. https://t.co/EkX3IOqXrG

Toronto got a gift point when Tatum was T’d up for accidentally hitting a Raptor in the face on a drive. These rules are absurd. That point proved costly.

Powell got fouled and made both, 106-104, Raptors, with 1:32 left.  It stayed that way until Boston called time with the ball and 19.1 seconds remaining. Jaylen was fouled after the inbounds and calmly made both to tie it, 18.9 remaining.

Powell missed the last shot and we went to double OT.

Norm Powell iso is the play?

Bodies are everywhere. Refs don't know what to call. Everyone must be exhausted. This game is great fun, but in a sick and twisted way.

Celtics starters have been in since the final minute of the third quarter.

The battle went back and forth in the second OT. Boston went up 4, Raps tied it, Smart hit a three, Powell matched it. Celts were up 2 when Theis was fouled with 3:07 to go – but the call was challenged and overturned. Raptors got possession and tied the game.

Tatum quickly scored after a timeout, by Lowry hit a dagger jumper to restore the 4-point lead.

Relive Kyle Lowry's CLUTCH jumper to seal the @Raptors 2OT W and force a GAME 7 on Friday at 9:00pm/et on TNT!#NBAPlayoffs #WeTheNorth pic.twitter.com/d0RrsMv90h

Tatum swished a desperate triple and it was 123-122. Powell was fouled with 5.0 seconds, made both, 125-122. A set play saw Tatum throw a long inbounds pass to Smart, who got a decent look to tie it, but missed as he was heavily contested.

The conversation now will be very much about the officiating, seeing as how the game turned around with the 6-point possession and then several replay reviews and contested calls all went Toronto’s way. Don’t take my word for it. Here are the thoughts of noted ref skeptic MikeWichter…

the sad thing about the nba? we all know at 10am this morning this game would be one sided with the refs We all knew it. this is how donaghy made a ton of money. He knew based on officiating assignments. that is a problem. well done @nba

What was your favorite officiating decision?

…and one of the smartest, most sensible and reasonable people on Twitter, Dangercart. If he says this, something is really wrong.

Refs stole the game. If we lose Game 7 they stole the series. I don’t want to hear about how we had chances and shit. We won the game and they took it away. 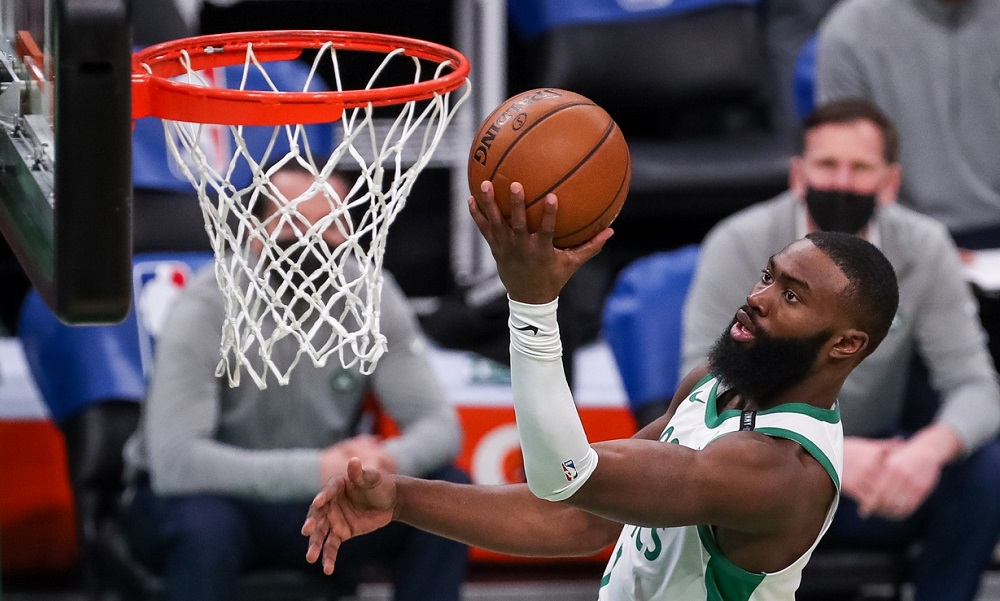 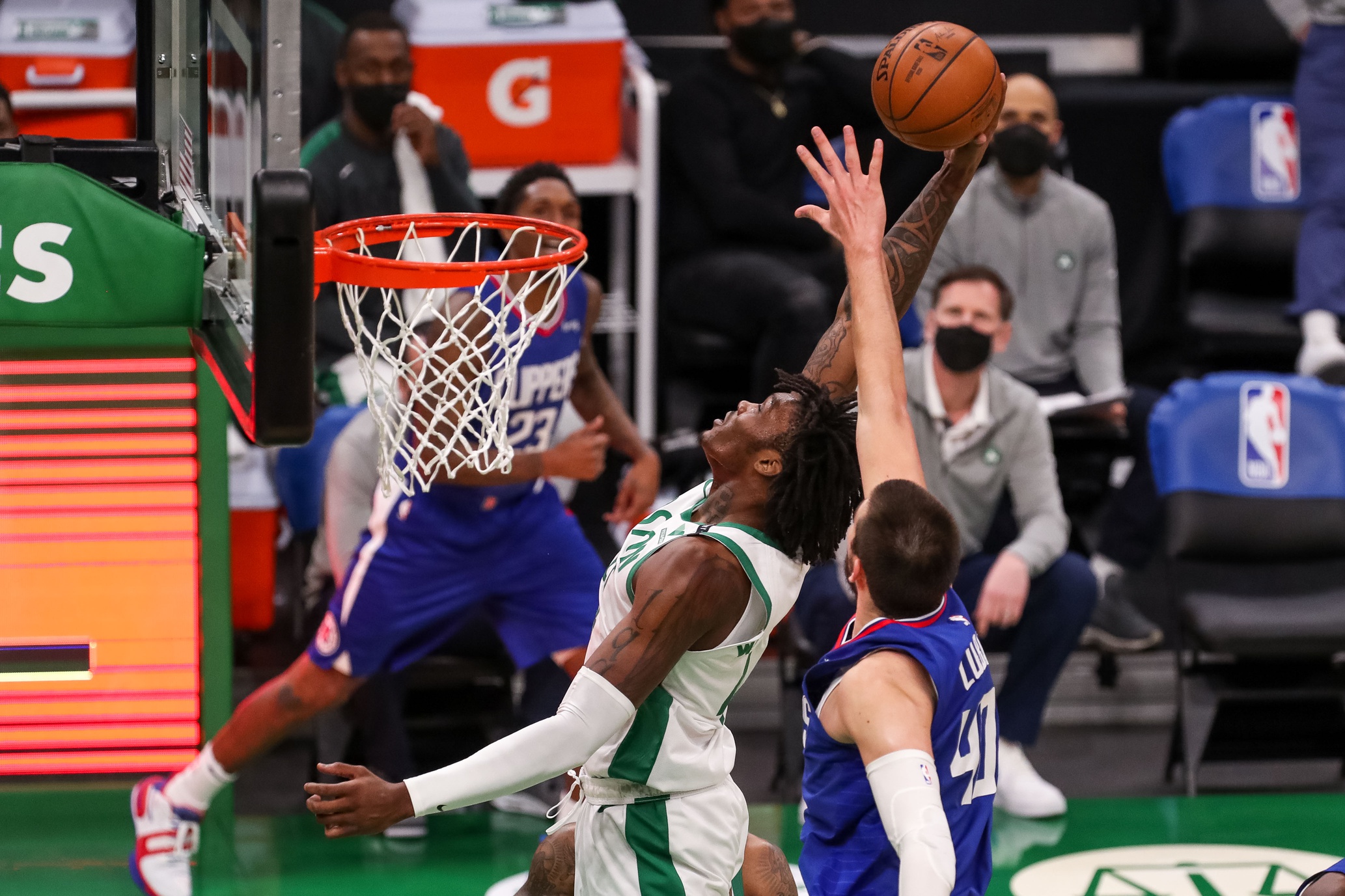