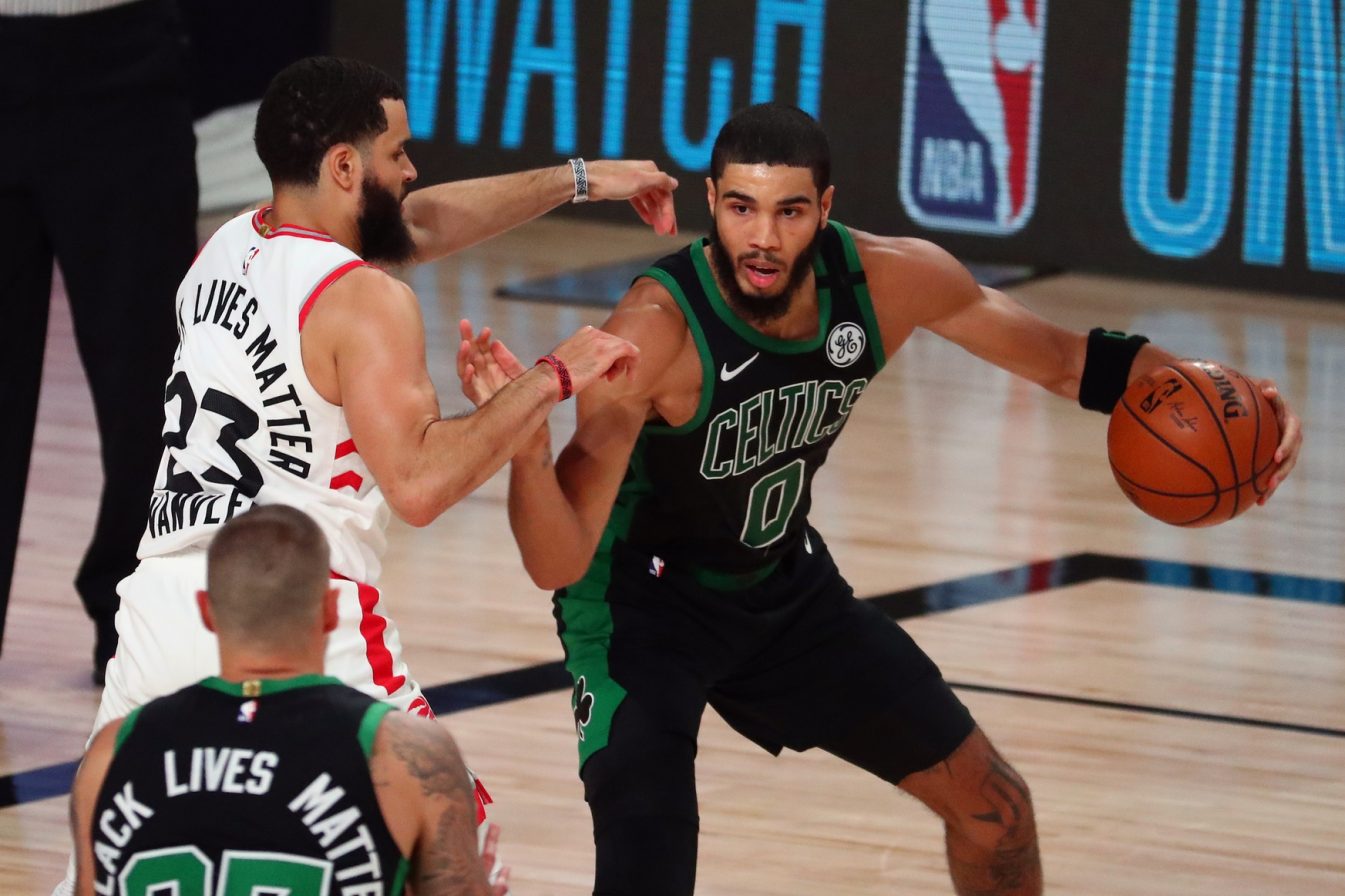 It doesn’t get more tense than NBA Game 7s in any round of the playoffs beyond the first. (Stakes just don’t feel as high in round-one elimination games, even if they’re technically the same as any other round.) Tonight was perhaps the most tense a Celtics Game 7 has been since the 2011-12 season…but despite a lot of pressure from the Raptors, a first half full of missed shots and a less-than-perfect night from Kemba Walker, the Cs emerged victorious from a grindy, physical game, winning 92-87 and Conference Finals-bound.

Jayson Tatum has been Boston’s best player overall in this postseason, and without his all-around excellence this win doesn’t happen. He finished with 29-12-7 plus a steal and a block. Jaylen Brown was right behind him despite some early jump-shooting trouble, racking up 21-8-2 and 4 steals, and even without a dominant offense Kemba Walker still made his presence felt (14-6-4-2-1). But you know who that win definitely doesn’t happen without? Marcus Smart, who shot unevenly (yet still clocked 16 points) but had 3 steals, innumerable deflections, several critical charges taken and a game-saving block:

👀 Marcus Smart with the clutch block on Powell!

A succinct but apt pregame tweet begins our trip down the timeline of this win-or-go-home contest:

The game began as a grindy war of attrition, with the teams putting tight defensive clamps on each other.

The Boys are ANGRY

Bad decisions by Toronto (namely, guys like Marc Gasol taking…a surprisingly large number of shots for a 30+ defensive specialist) and deadeye Boston shooting fueled a 13-0 run that put them ahead by the halfway point of Q1. The Raptors responded with a 9-2 run, and then we were back to attrition.

Still close, but c’mon guys. Let it be easy for once. Why not? Tatum was doing well; the other Cs’ primary scorers…not so much.

There seemed to be something just…off with the Celtics, at the absolute worst possible time. And Brad Stevens letting the bench, particularly Semi Ojeleye, have extended run again was decidedly unwise. Does it suck having to make your top 7 guys do everything? Sure, but sometimes that’s what it’s gotta be.

But in fairness, no one but Tatum was doing particularly well on both ends of the floor. (Brown and Theis were playing OK defense but not scoring well at all; Smart went cold on offense after a hot start and Kemba Walker was really not doing well at all.)

It seemed like if anything was going to win the Cs this game, it’d be defense. They shaved a nearly double-digit lead to three by forcing turnovers—taking charges, stripping the ball without fouling—and getting transition buckets off of them. Indeed, this got them back their lead, albeit at a hairsbreadth margin.

this on repeat please 🙏 pic.twitter.com/HcNNyhcyAD

please get hot Kemba. use the power of The Sauce pic.twitter.com/FugHqAbkcu

Good points by Tuck below:

Ok slowly but surely everybody has entered the game, first it was just Jayson, then it was Smarf, then Jaylen, Kemba is doing alright rn just need a few in a row now in the 3rd. Good adjustments in the first half, now let's not get outcoached in the 3rd for a seventh time.

Whatever happens in this game, our fans are Cooler, Better and Weirder than the Raptors fans; I know that much:

Aggressively posi for the second half and YES I’ve had Many Claws pic.twitter.com/UJMpUwZXUY

Boston come out for the third well aware of the fact that they’d lost every single third quarter in the series, even the two blowouts, and padded their lead. Tatum was, as before, leading the charge.

But the bench disparity made it difficult for Boston to maintain their lead; every time starters needed a breather, Toronto would always have at least some semblance of an advantage. Not to mention Kemba staying alarmingly cold, to the point where it couldn’t just be the fucking box-and-one scheme and Lowry’s on-ball defense…right?

The Power of Tatum and defensive intensity to generate points off of Raptor turnovers kept the Cs ahead, and in the 4th, they began to smell blood and beleaguer their opponents’ defense.

Wouldn’t be a Celtics playoff series without an injury scare:

Oh, crap. These floors were going to hurt someone at some point. This sucks.

Positive update on Boston’s Jaylen Brown from Orlando: He is staying in game after apparent injury.

DOWN TO THE WIRE ARE WE…

For most of Q4, Boston kept a healthy six- or seven-point distance from Toronto, but things got absurdly tight in the last few minutes, naturally, due to a combination of Raptors raging against the dying of the light and Celtics mistakes.

PLS CLOSE IT OUT

BUT I KNOW IT'S GONNA BE CLOSEEE

Tatum and Smart quite literally willed this team to the ECF. No two ways about it. Let’s see that block one more time:

👀 Marcus Smart with the clutch block on Powell!