Six Key Factors That Will Determine the Winner of Packers vs. Vikings 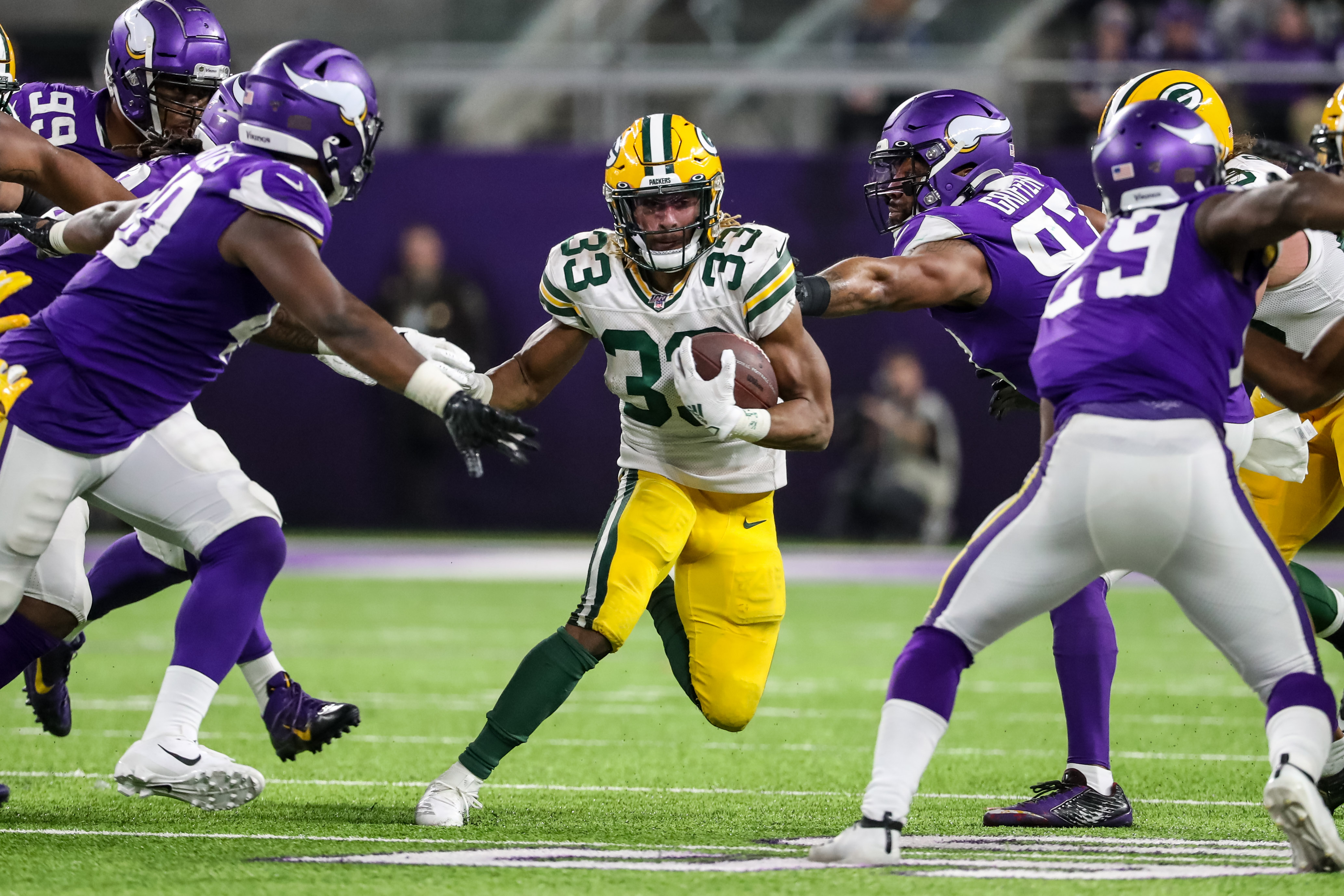 Six Key Factors That Will Determine the Winner of Packers vs. Vikings

The Green Bay Packers head to Minnesota to open what promises to be the most unusual NFL season in recent memory. The Packers are looking to win their third straight game against the Vikings and to establish themselves as favorites in the NFC North again in 2020.

Because of the continuing coronavirus pandemic, there will be no fans in attendance at this game. Although the league will pipe in some crowd noise but the effect of an empty stadium on home field advantage is still unknown.

The Packers won the NFC North last year with a 13-3-0 record while the Vikings finished 2019 with a 10-6 record and qualified for the playoffs as a wild card.

Green Bay leads the all-time series between these two teams 61-53-3 with the teams having split their two postseason meetings. Green Bay won both meetings in 2019, defeating the Vikings 21-16 in Week 2 in Green Bay and then clinching the NFC North title with a 23-10 win in Minnesota in Week 16.

Here is a look at six key factors that will determine who wins the season opener on Sunday:

The Packers run defense was a major problem last season and the Vikings have one of the league’s better running backs in Dalvin Cook. The Packers will need to contain Cook and force the Minnesota offense into obvious passing situations.

Cook had a great 2019, gaining a career-high 1,135 yards and scoring 13 touchdowns. He gained 154 yards on 20 carries against Green Bay in Week 2 including a 75-yard touchdown dash that got the Vikings on the board when they were trailing 21-0.

The Packers will have to show that their run defense has improved by containing Cook. The biggest advantage the Packers have is the mismatch with Kenny Clark against the Vikings interior offensive line. Clark should be able to get penetration against guards Dakota Dozier and Pat Elflein and center Garrett Bradbury who are average at best.

We will also see what Christian Kirksey looks like at the ILB position and how well he can defend against the run.

Raven Greene is on the injury report this week but the Packers certainly could use him in the lineup to help contain the run if he is available to play the hybrid S/ILB position.

The Packers have questions on the right side of their offensive line, particularly at right tackle. Billy Turner won the job in training camp but he is probably going to miss this game because of a knee injury and free agent addition Rick Wagner is the likely starter at right tackle. Veteran Lane Taylor will likely start at right guard.

The Vikings will be without their top pass rusher, DE Danielle Hunter who was placed on the injured reserve list earlier this week. They still have the recently acquired Yannick Ngakoue who is a dangerous pass rusher on the other side but hasn’t had much time to practice with his teammates.

The Vikings will probably try to keep Ngakoue away from Packers left tackle David Bakhtiari who is one of the better pass blocking tackles in the league.

The Packers will probably emphasize a shorter passing game with occasional deep shots to Davante Adams and Marquez Valdes-Scantling. But protecting Rodgers and keeping him healthy will be keys for the Packers in Week 1 and throughout the season.

Matt LaFleur’s offense revolves around the play action pass and the deception and confusion created by running different plays out of nearly identical formations. The Packers need to at least make the Vikings respect the threat of the running game for this to happen.

Aaron Jones played exceptionally well in both games against the Vikings last season, gaining 116 yards rushing in Week 2 and 154 yards in Week 16.

The Packers have an offensive line that should be quite solid at run blocking with the addition of Lane Taylor adding to that skill.

Jones and Jamaal Williams will probably get the bulk of the work with A.J. Dillon set to make his NFL debut if he’s active and Tyler Ervin to touch the ball a few times a game on gadget plays.

Expect the Packers to run the ball between 40 and 45 percent of the time assuming they don’t fall behind too quickly and keep the offense balanced. If the Packers run the ball well, the Vikings will be in trouble.

In recent seasons, the Vikings had the duo of Thielen and Stefon Diggs to give opposing teams headaches, but Diggs is now with the Buffalo Bills. The Vikings drafted Justin Jefferson to replace Diggs, but like all rookies, Jefferson may not be able to contribute much, especially early in the season, due to the lack of preseason and offseason reps.

Thielen remains a deep threat and a dangerous receiver. The Packers may attempt to have Jaire Alexander shadow him at times or they can stick to their typical defense and play a mixture of zone and man to try to shut down Thielen that way.

The big thing is the Packers cannot allow Thielen to beat them deep. In 2018, he made 20 catches for 256 yards and two touchdowns against the Packers. Last season, the Packers held Thielen without a catch in the second meeting and limited him to 75 yards on five catches in the first.

Without Diggs, Thielen becomes the lone proven deep threat the Vikings have. If the Packers can contain him, Minnesota’s passing attack is a lot less dangerous.

Kirk Cousins struggled in both games against the Packers last season, completing just 30 of 63 passes and throwing two touchdowns against three interceptions.

One of the biggest reasons for Cousins’ struggles was the Packers ability to put pressure on him when he went back to pass.

Za’Darius Smith was dominant in the second game, making 3.5 sacks and seven tackles and five quarterback hits. The Packers had seven hits, seven tackles for loss and five sacks as a team in the game.

The Minnesota offensive line is vulnerable, especially inside. Look for Kenny Clark to have a big advantage both against the run and getting a pass rush up the middle of the line of scrimmage. The Smiths should also be able to get some pressure on Cousins from the edge.

If the Packers can rattle Cousins, the Vikings offense will be a lot less effective Sunday.

The Vikings had a lot of turnover at the cornerback position this offseason with three of their top corners departing including Xavier Rhodes, Trae Waynes and Mackensie Alexander. The secondary is now young and unproven and because of the lack of preseason games, they may not be in synch just yet.

Mike Hughes and Holton Hill are the likely starters with rookies Cameron Dantzler and Jeff Gladney also likely to see action. Hughes and Gladney are both 5’10” which means Allen Lazard, Marquez Valdes-Scantling and Equanimous St. Brown will have a big height advantage on them.

The inexperience of the two rookies should also give Davante Adams a big advantage when he makes his moves at the line of scrimmage. Look for Adams to have a big game catching short passes on plays he gains an advantage right off the snap.

Expect a sloppy game as neither team has taken a snap against another team since January. These are the two teams that are expected to contend for the NFC North title this year. The Packers are fortunate in many ways. The Vikings are without Hunter which will hurt their pass rush. Their secondary has a lot of new faces and there will be no fans in the stands for this game which will reduce the Vikings home field advantage.

Minnesota needs Cook to have a big day if they hope to win this football game. It will be a close game. The Vikings are a good team but the Packers continuity and the loss of Hunter gives the Packers an edge.