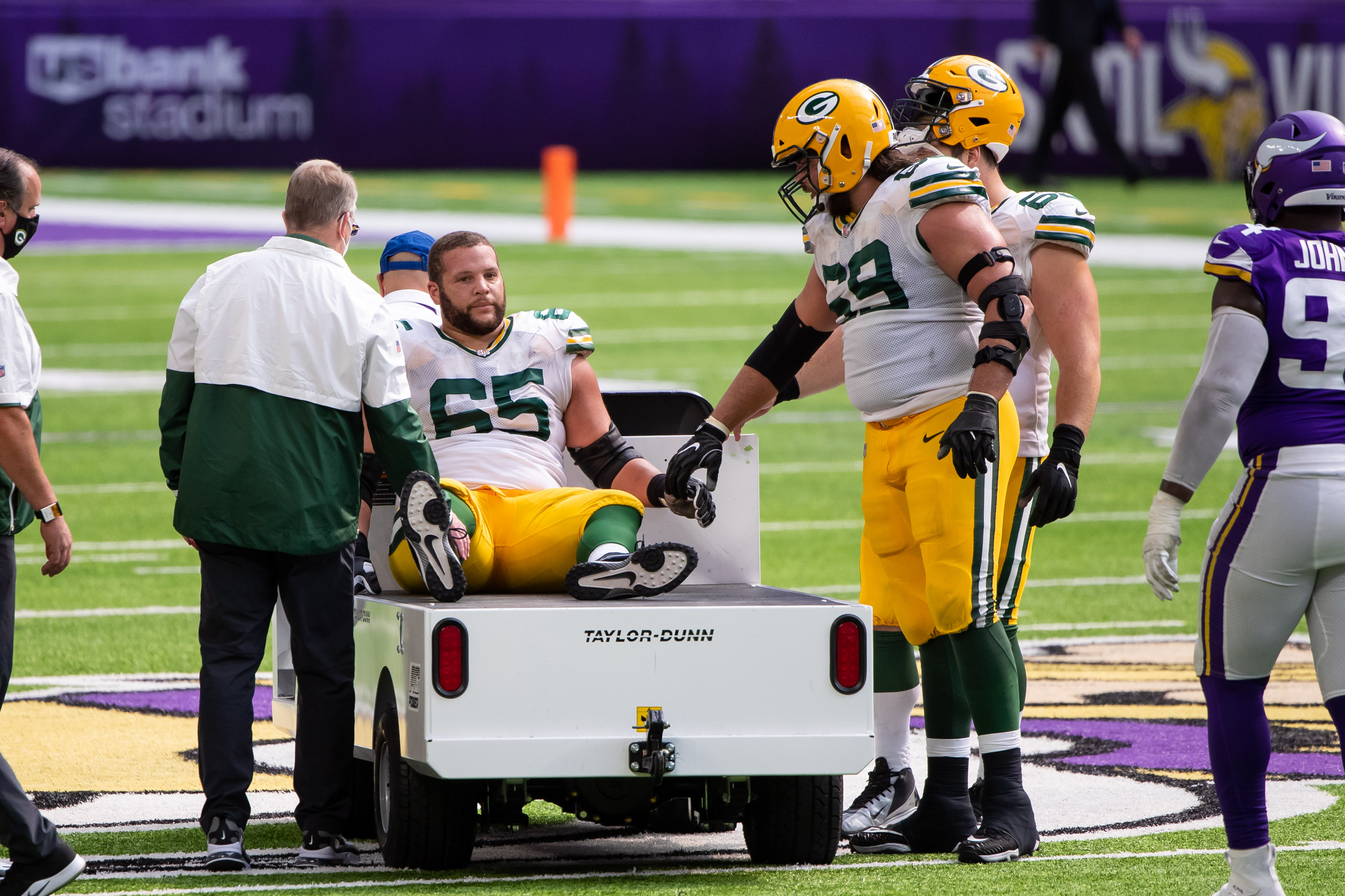 The Green Bay Packers offensive line played well in Week 1 against Minnesota. The Packers did not allow a sack while scoring 43 points and gaining 522 yards of total offense. But injuries hit the line hard in the season opener. Billy Turner was already out of the lineup and was inactive due to a knee injury. During the game, the Packers lost guards Lucas Patrick and Lane Taylor to injuries as well.

So, the question now becomes what do the Packers do up front and how do they move forward both in the short term and long term. The good news is the team has depth along the offensive line and many choices depending on who is healthy and available to play any given week.

Once Patrick was hurt, the Pack moved Jenkins back to left guard and inserted Rick Wagner in at right tackle. When Taylor went down, the Pack inserted rookie Jon Runyan at right guard and he did well for the remainder of the game.

Unfortunately for the Packers, Taylor’s injury requires surgery and is season ending. It is the second straight year that Taylor was injured and lost for the year in the first two games.

Taylor had worked hard to rehab and return to the lineup in time for the season opener. He took a pay cut to remain in Green Bay and won the starting right guard spot after having a strong training camp.

“My heart goes out to him,” Packers head coach Matt LaFleur said. “Just battling back from the significant injury he had last year to get to a position where he was in our starting lineup, certainly he will be missed. I just feel bad for him as an athlete, as a man. It takes a lot to come back from a significant injury and he put the time in and put himself in great position to have a great year.”

Much of what the Packers will do from here on depends on the availability of Billy Turner. The 6’5”, 310-pound North Dakota State alum missed the opener due to a lingering knee injury. It is still not clear when he will be available to return to the lineup.

Turner provides the Packers with versatility. Once he is in the lineup, the most likely scenario would be that Turner fills in at right guard with Wagner starting at right tackle. That was the lineup most experts anticipated after the Packers signed Wagner as a free agent in March.

Another alternative if Patrick is healthy enough to play Sunday (and early indications are he could be) is for the Packers to simply insert Patrick at right guard and leave Wagner at right tackle. The Green Bay coaching staff is extremely comfortable with Patrick playing anywhere inside along the line and he did a good job at left guard against Minnesota before he had to leave the game due to injury.

The Packers also could move Jenkins at right tackle long term, move Patrick back to left guard where he started the season and insert Runyan in at right guard. This is unlikely because although Runyan played well in the 15 snaps he had on offense, the Packers coaching staff prefers not to rely on a rookie offensive lineman if they have viable alternatives. They could also insert Turner at right guard instead of Runyan once he becomes healthy but moving Jenkins to right tackle long-term only really makes sense if the Packers feel that is his best fit for him over the course of his career.

The return of Turner gives the Packers the most options because he can play either guard or tackle. That would allow Wagner to start at right tackle alongside Turner. Or they can move Jenkins to right tackle and insert Patrick at left tackle and Taylor at right guard.

GM Brian Gutekunst has always valued versatility along the offensive and now we’re seeing that come into play. The Packers are hopeful that they can find the best combination of available linemen to put together a solid and cohesive group along the line.

The Packers offensive line performed very well against the Vikings despite the injuries and different lineups they had to put together. Now they need to do that for another 15 games and hopefully beyond that to be successful for the rest of the season.