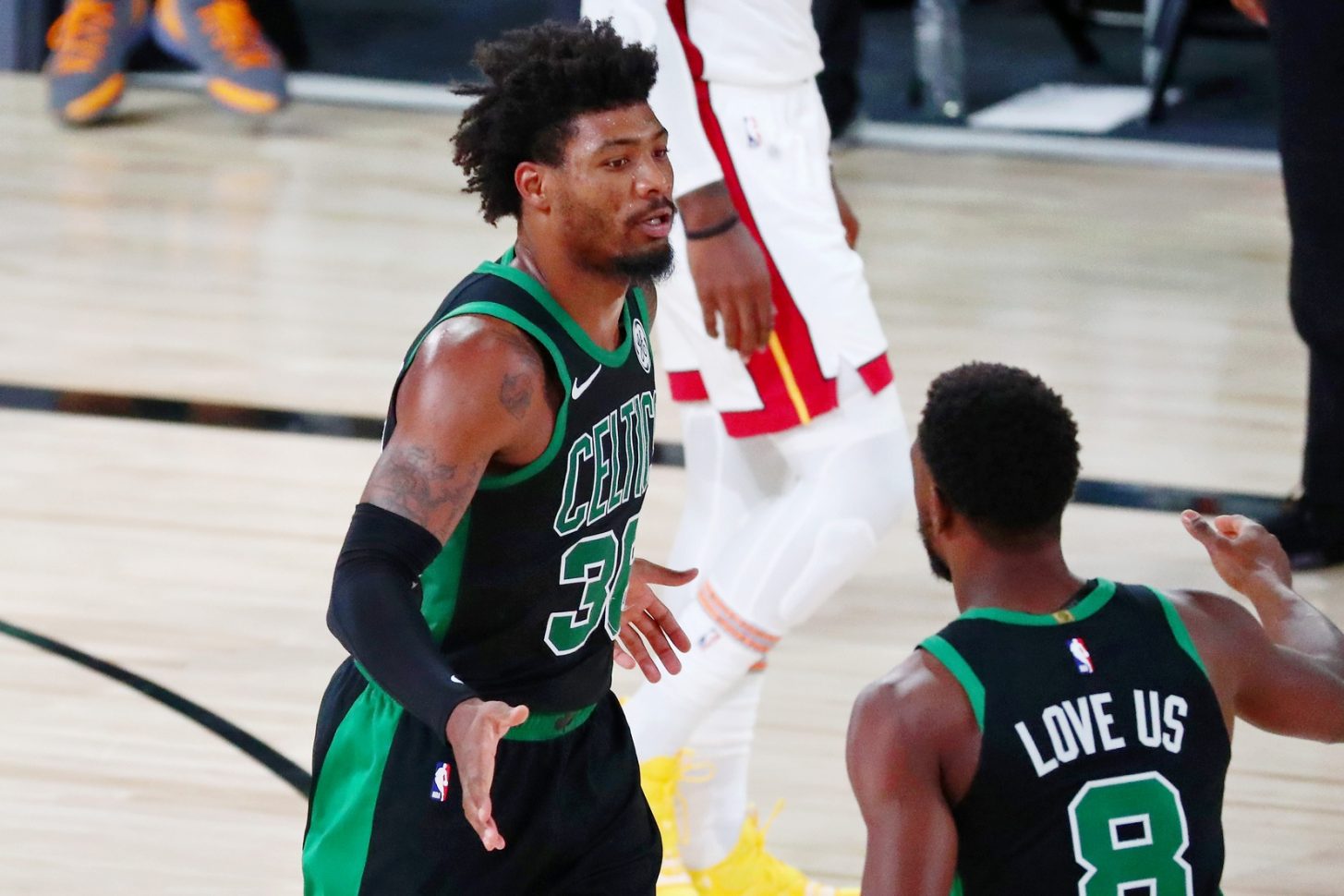 Game 1 was not a fluke for the Miami Heat—they’re damn good. Nor was it some massive crisis for the Boston Celtics—they barely lost in OT. Were most Cs fans nonetheless edgy as hell leading up to Game 2? You bet. Turns out that was the right reaction. Despite a dominant 2.5 quarters of basketball, the Celtics fell into traps not dissimilar to those that doomed them in the games they lost to the Raptors: turnovers galore, bafflement over zone defense, sloppy or rushed shot attempts and an inability to maintain focus upon creating a lead.

If there are any positives to be had, Kemba Walker looked like the Kemba to which we’re accustomed: 23 points, 7 rebounds, 3 assists, 2 steals and a block. Jayson and Jaylen both dropped 21 points; the former added 5 boards, 4 dimes and a steal while the latter had 6 rebounds and a pair of assists to round out his line. Beyond that and Marcus Smart’s 14, that was kinda it for the offense. The degree to which the Cs need Hayward back can’t be overstated.

A brief word from Weird Celtics Twitter before we take you through the Game 2 timeline, before reality ruined it:

this is my expectation for tonight pic.twitter.com/l86pEEq6WQ

The game began much like I expected given the participants: back-and-forth action, frequent lead changes, both teams relying heavily on the three and restricted area for offense and trying furiously to disrupt the opposing transition plays on defense.

Kemba getting it started early pic.twitter.com/W90kL6pFru

This is first time Kemba Walker has made multiple 3s since Game 3 against Toronto.

He made the first shot of the game off the dribble and it looked glorious, and that plus his playmaking skill (which hasn’t faded even as his shot’s been off) made a huge difference. Unfortunately, he wasn’t making threes at the clip of  Duncan Robinson, a guy who definitely wore double upside-down double visors and popped collars in high school (shoutout Sam Packard).

At the end of 12 minutes, there’d been six lead changes, the sixth belonging to Boston, who held a 31-28 advantage.

In the second frame, one of those times where the main Celtics weakness vis-a-vis the Heat—the bench disparity. which was also true vs. Toronto—usually bites them in the ass, the reserves and Tatum…gave the Cs a double-digit lead.

Weird bench unit + Tatum working like it did in the regular season, in opposition to all logic

Yes, Kanter was good too, in the exact way I predicted he could be on the last episode of The Illegal Screen (available on all podcast platforms; plz listen and subscribe): in spot minutes against the Heat’s thin backup big rotation. Wasn’t just him; Wanamaker and Grant Williams made the most of their time as well. But Kemba Walker was the first-half engine. Hard to deny that.

The only other thing that might qualify is “offense in the paint” as a whole:

Boston lost the battle in the paint by 22 in Game 1. In Game 2 they attacked the rim, used Kanter off the bench, and won the points in the paint battle 32-18 in the first half.

Seemingly intent on not letting the “third-quarter Celtics” meme come true again, Boston kept up the intensity they’d built up at the end of Q2. Nothing gets to be easy, so of course we had to have an injury scare when Smart accidentally hit Kemba with an elbow, but another false alarm:

i am very sick of injury scares tbh

Miami turned up their defense from “flabbergasted” to “relatively engaged,” so Boston wasn’t scoring as easily, but they kept their double-digit lead through the third frame’s first six minutes.

Sure seemed like there should have been a shot clock violation in favor of the Celtics. Instead, the clock is reset, there is a jump ball, Miami winds up with a four-point play and then now finds itself down 4 midway through the third. Wasn't long ago the Celtics were up by 15.

Tough stretch for the Celtics there. Refs reset the shot clock when they probably shouldn't have, Heat get a four-point play. Theis gets smacked across the forehead, no call, Miami gets a bucket at the other end.

Back to the attrition shit of Q1. The Celtics got their lead back, but it was the exact type of breakdown this team keeps suffering…so they lost it again.

This 3rd quarter is a classic example of why no lead is ever big enough. https://t.co/GooFSRcikR

Figure it tf out @celtics

The first few minutes of Q4 were some of the grimiest goddamn basketball I’ve seen in these playoffs. But the Cs were defensively intense enough to keep the Heat from building much on their lead—and the latter fell into the early bonus trap that helped fell Boston in Game 1.

Kemba doing what he can to keep the Celtics in this. What a shot 😳

The whistle that had gone Miami’s way in Q3 was now going Boston’s way, and Heat players like Kelly Olynyk and Derrick Jones Jr. weren’t helping by making fouls that redefined dumb.

Huge offensive rebound from Jaylen Brown. All tied up at 89. pic.twitter.com/56JIVsUxCj

Then the Cs were like, “Good execution and shotmaking is boring,” and Miami went on a definitive run. The blown opportunities are maddening beyond belief.

This has been an absolutely amazing collapse by Boston. A 13-1 run for Miami to swing this game back around late.

Good signs, really, no I don’t mind it’s funny to me: