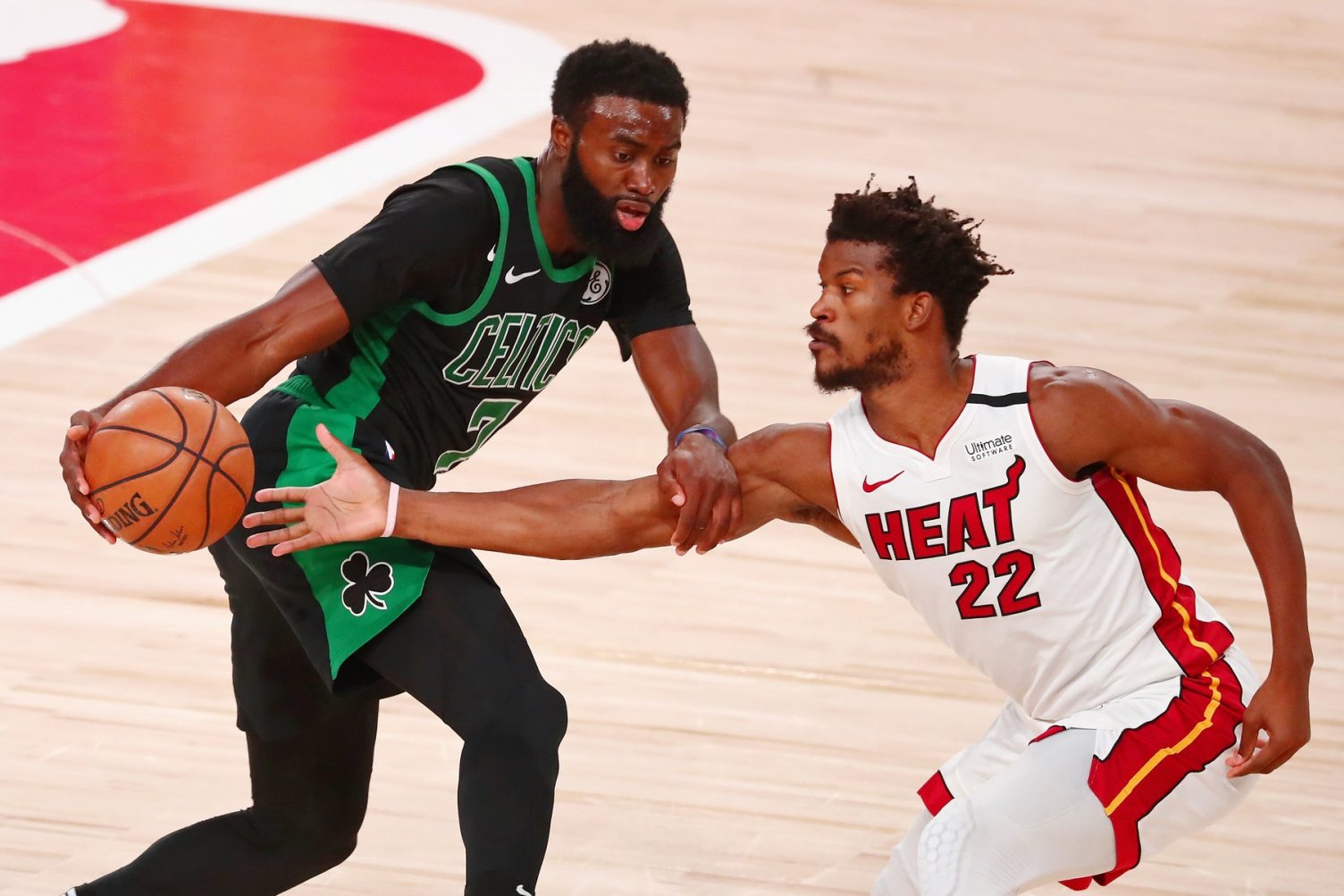 On the eve of a must-win Game 3, some fans are somewhat optimistic; others are pretty damn pessimistic. We’re all boiling over with nervous energy, and many of us have said some pretty wild stuff in our frustration. Myself definitely included.

However. We’ve had some time to think more critically about what actually happened in these two games. Take a look:

1. Miami’s margin of victory is minuscule.

The Heat won Game 1 by three points, sealing their victory on a near-impossible block of Jayson Tatum by Bam Adebayo. I wasn’t much frustrated by that game beyond its immediate aftermath. Because even with the mistakes the Celtics did make and the performance issues they showed—Kemba’s first-game shooting, the team-wide third-quarter lapse, last-minute failures of execution—the result ultimately came down to a dunk that Tatum had a higher probability of making than Adebayo had of blocking it.

Even Game 2, a failure much more serious than Game 1, was only a five-point loss. All teams make mistakes in the deep playoffs, including those that win titles. If a few plays didn’t break the Heat’s way in Game 2, they would’ve lost independent of the Celtics’ screw-ups. I’m not trying to let the Cs off the hook, but rather to illustrate that these teams are evenly matched to an absurd degree.

2. The collapses are undeniable and inexcusable.

Boston blew a 12-point third-quarter lead in Game 1 and a 17-point lead in Game 2. They lost their knack for defense in the painted area especially, allowing a boatload of easy layups and dunks (particularly dunks in Game 2; Adebayo’s path to the cup was oft-unobstructed). In the second game, Celtics added “constant turnovers” to its failure repertoire, losing control of the ball 20 times to Miami’s 9. I mean…just look at this shit.

That was the real heartbreaker of Game 2: Not that the Cs blew their lead in Q3, but that they gained a decent lead back in the following quarter only to lose it again. That’s what’s maddening: The first halves of the two games are an accurate picture of each team’s baseline, but losing focus even for a second gives Miami enough rope with which to hang your ass by the neck until dead.

3. The zone thing is irritating and arguably inexplicable.

As Jared Weiss wrote in The Athletic a few nights ago:

The zone is not a novel concept to the Celtics offense. They just finished seeing every variation of it the human mind can concoct a week ago against Toronto.

And yet, Thursday night Boston was in control of Miami, until the moment when the Heat went to the zone in the middle of the third quarter. The Celtics abruptly collapsed.

Boston scored 25 points on 32 possessions against Miami’s zone defense. That’s 0.78 points per possession, which is as bad as it gets.

Zone D is profligate in college. Every American NBA player who came from NCAA or plays for a coach who did would, you’d think, understand the zone. The Cs just spent a series dealing with zone and came out on top, tough as it was at times. Brad Stevens has undoubtedly played and faced countless NCAA zone schemes. Marcus Smart was a two-year college player and thus probably saw more zone than the average prospect (whatever other mistakes he’s made, the zone has rattled him least).

Why the hell is Miami’s zone so tough? Effort is one aspect—the Heat push harder than the Raptors did, despite operating in a rigid 2-3 zone format as opposed to Toronto’s variable arrangements. Miami’s zone also appears to stymie Boston’s ball movement, as Rich Jensen noted in Friday’s Morning Dump. Mucking up the key offensive strength of the Cs in the Brad Stevens era is a huge problem. Not an insurmountable one, but it’ll require Boston to have unwavering intensity for the full 48. The team knows how on-the-ropes they are; their response has to match the predicament.

4. Brad Stevens isn’t getting fired, nor should he be; he’s also definitely made significant errors of late.

“It’s a hard zone to play against,” Brad Stevens said. “We did play well against it in Game 1. We played with way better pace than we did tonight. So we’ll go back and look at it, figure out if it was a technical thing or a pace thing or an execution thing or just not-as-focused-on-the-important-stuff thing.”

This being the Boston sports universe we’re talking about, there was plenty of clamor about Stevens, and more than a few “fire him!” freakouts. The latter trend is ridiculous for too many reasons to list here, but Stevens is hardly blameless.

His main issue throughout the season has been odd lineup choices, and they’ve reared their head in this series: When Enes Kanter had a run of success in the first half of Game 2 because the Heat were drowning on both ends of the floor, that did not mean he was the guy to bring on in Q3 when everything’s going to shit.

Kanter immediately got waxed by Adebayo for a three-point play. Uncanny. Meanwhile, while Semi Ojeleye is getting minutes due to the absence of Hayward, he shouldn’t be getting that many. He can’t shoot and is too lead-footed to be of significant defensive value vs. Miami. Then there are those he isn’t playing: Robert Williams may be raw and occasionally have truly mind-boggling gaffes on defense, but his energy could’ve been useful against Adebayo.

As for non-lineup issues, Stevens seems more rigid in his decision-making of late than he has in the past, rather than quickly adjusting to trouble. On the other hand, when his teams have generally strong chemistry (as this one does, random locker room fights notwithstanding), they have a knack for punching back hard when they’re cornered. They’ll certainly have to tonight.

5. Boston still has the best players in the series.

Before you say “JIMMY BUTLER THO:” I don’t think Butler’s even been the Heat’s best player this postseason, let alone this series. Adebayo and Goran Dragic fit the bill in both instances. While Adebayo could be a top-15/top-10 guy in the near future, Jayson Tatum is a top-20, arguably top-15 guy right now. (As for Dragic, let’s just say players who looked washed for years suddenly looking revitalized in Miami…is not unprecedented; I also think he can be knocked off his axis.) Brown should’ve been getting the ball more in Game 2, because he’s capable of contributing a lot more than he did—you recall him looking more alive in Q4 than any other Celtics player, right? And then there’s Kemba:

This Kemba sequence was pretty awesome. Think he sold as if he was going to Nash this with a goofy-footed scoop, but ended up taking another stride after Herro bit. Sweet pic.twitter.com/9BnLEPzVkx

Kemba looking like his usual self was only the bright spot of Game 2. If he continues on that trend and there aren’t significant regressions from Tatum or Brown, I think Boston has more than a chance to turn this around.

6. The Cs can win Game 3 without Hayward. It can’t win the series without him.

Given Miami’s narrow margins of victory and how good Boston has looked when fully engaged, a win tonight is absolutely possible without Hayward if they move the ball crisply on offense, lock in on interior defense and mitigate turnovers. But at this level of intensity, the Cs can’t win three more games without Hayward. He doesn’t have to score a ton of points per game, but his secondary playmaking, versatile shooting and defense are vital.