Who:  The Minnesota Vikings vs. the Indianapolis Colts.

When:  1 PM Eastern, Sunday, September 20th. TV: FOX. We get the dynamic duo of Tim Brando and former Viking RB Robert Smith. As I’ve said many times before, if you want to escape these lower rated broadcast crews, you do it by winning.

Last Sunday was one of the most embarrassing, pathetic, *insert whatever here* losses the Colts have suffered since the arrival of Peyton Manning in 1998 helped pushed them into being a legitimate NFL franchise. I love Frank Reich, but sometimes I feel like he’s too smart for his own good and ends up making it more complicated than what it is. Last Sunday was a good example. They threw it way too much.

And the defense? Whew. Was Darius Leonard even out there? Did anyone from the secondary beyond Kenny Moore suit up? We know Xavier Rhodes did, because the EIGHTH YEAR veteran made a grade school mistake by staring into the backfield, allowing his man to run free for a wide open TD. Ridiculously bad.

Who knew those preseason games everyone loathes are actually important? You mean game speed reps make a difference compared to your own guys just beating on each other? Yes, they do. There was a lot of sloppy football in Week 1.

Maybe next time try some run the damn ball mixed with some well-timed play action.

On Thursday, Irsay took to social media for a video made to inspire the fans.

On game day, he tries a different strategy.

Shortly before the players take the field, Irsay addresses them in the locker room. In a Colts Authority exclusive, we were able to obtain a transcript of this conversation.

“I love you guys, man. You men know…this is our home opener, and we’ve got the Vikings, man. That’s why I’m wearing this cool 10th century viking helmet, man. It’s like Led Zeppelin. They come from the land of the ice and snow, man. It’s pretty cool. The midnight sun. But I’ll tell you, man. We got the hammer of the gods. We’ve got Quenton and Ryan. We’ve got Jonathan making his first start. We’re here playing for our city, Indianapolis. We’ve got a lot of people behind us, man. These fans are like bras. They’re with us through thick and thin, man. Let’s go out there and make them proud.”

Unbeknownst to Frank Reich, Irsay has given the o-line authentic viking helmets as a gift. Inspired by Irsay’s pregame monologue, the unit decides to wear the gifts at some point during the game.

It works. Kinda. Early in the 4th with the Colts leading 24-17, old man Rivers calls for play action. The Vikings bite, and Taylor bursts left with Nelson leading the way. He’s 20 yards from pay dirt when Nelson makes contact with safety Anthony Harris. Nelson’s helmet gores Harris in the thigh. He falls to the ground bleeding, but is deemed ok after receiving 25 stitches. Taylor scores easily.

The Colts survive two late 4th quarter TD’s by Minnesota that both occur when Xavier Rhodes is caught staring motionless for several seconds after the snap. On the second one, FOX picks up Rhodes shouting “squirrel!” even though there’s no squirrel to be found.

If you’re a reader of this fine mess you know I like to involve other people, so I asked why the Colts will score more than the other guys:

#Moose: “Because Philip Rivers.” She didn’t watch last weekend *facepalm* I thought I did better than this…

Vikings fan Tamara: When I originally asked if she wanted to contribute, I think she was still a bit salty about the Vikings loss to Green Bay, because she said “They’re gonna lose and Kirk Cousins is the worst.”

After a couple of days passed, she shared this from the Vikings twitter account. If you think about it, it explains so many things. 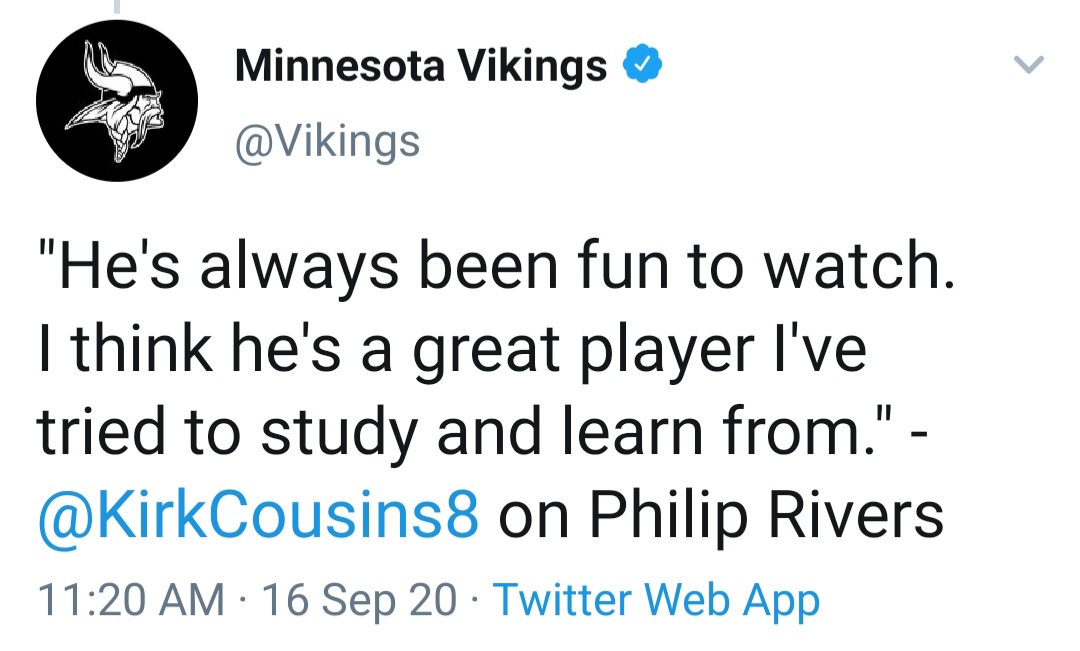 Lastly, she was kind enough to give her thoughts on how the game might turn out: 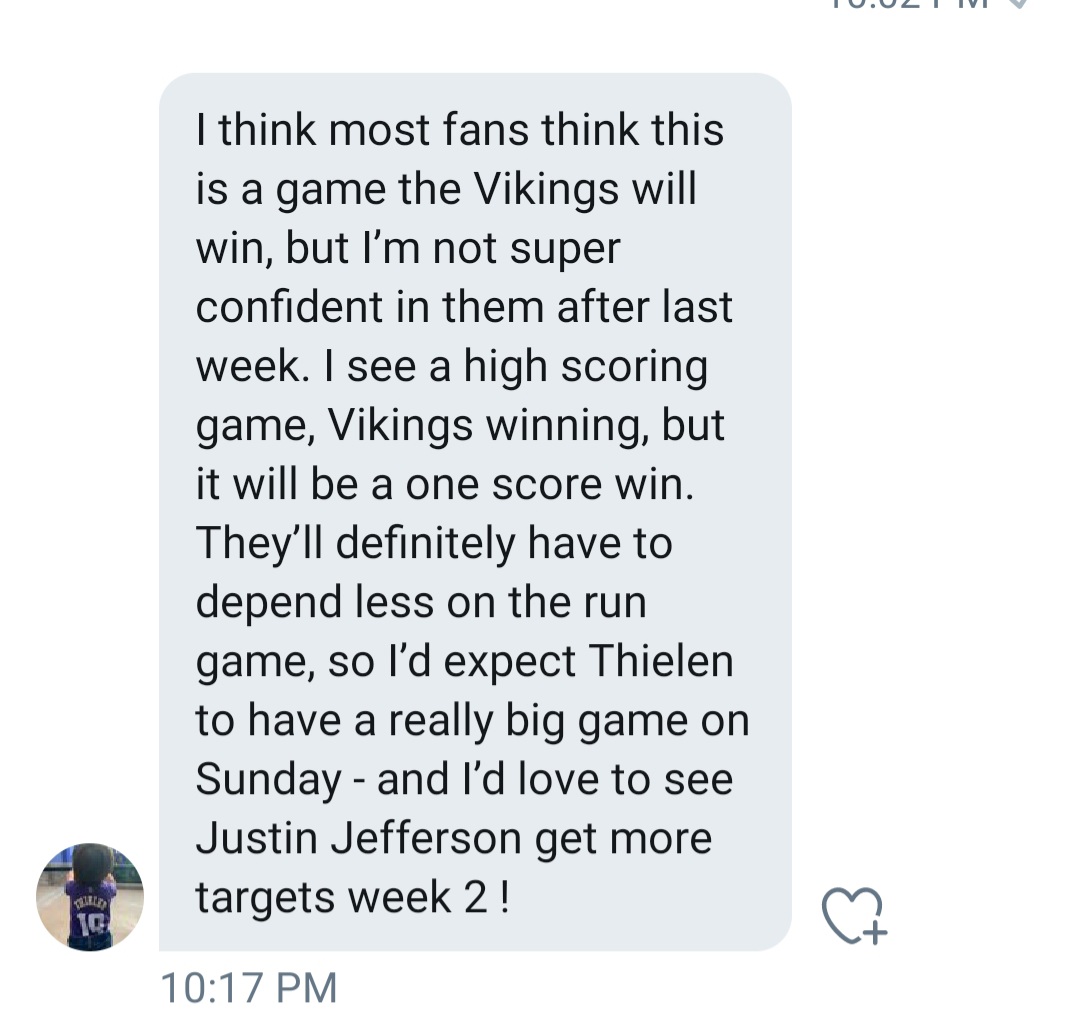 Anyone who watched the Colts defense last weekend can’t argue with anything she says here. Thanks, Tamara!