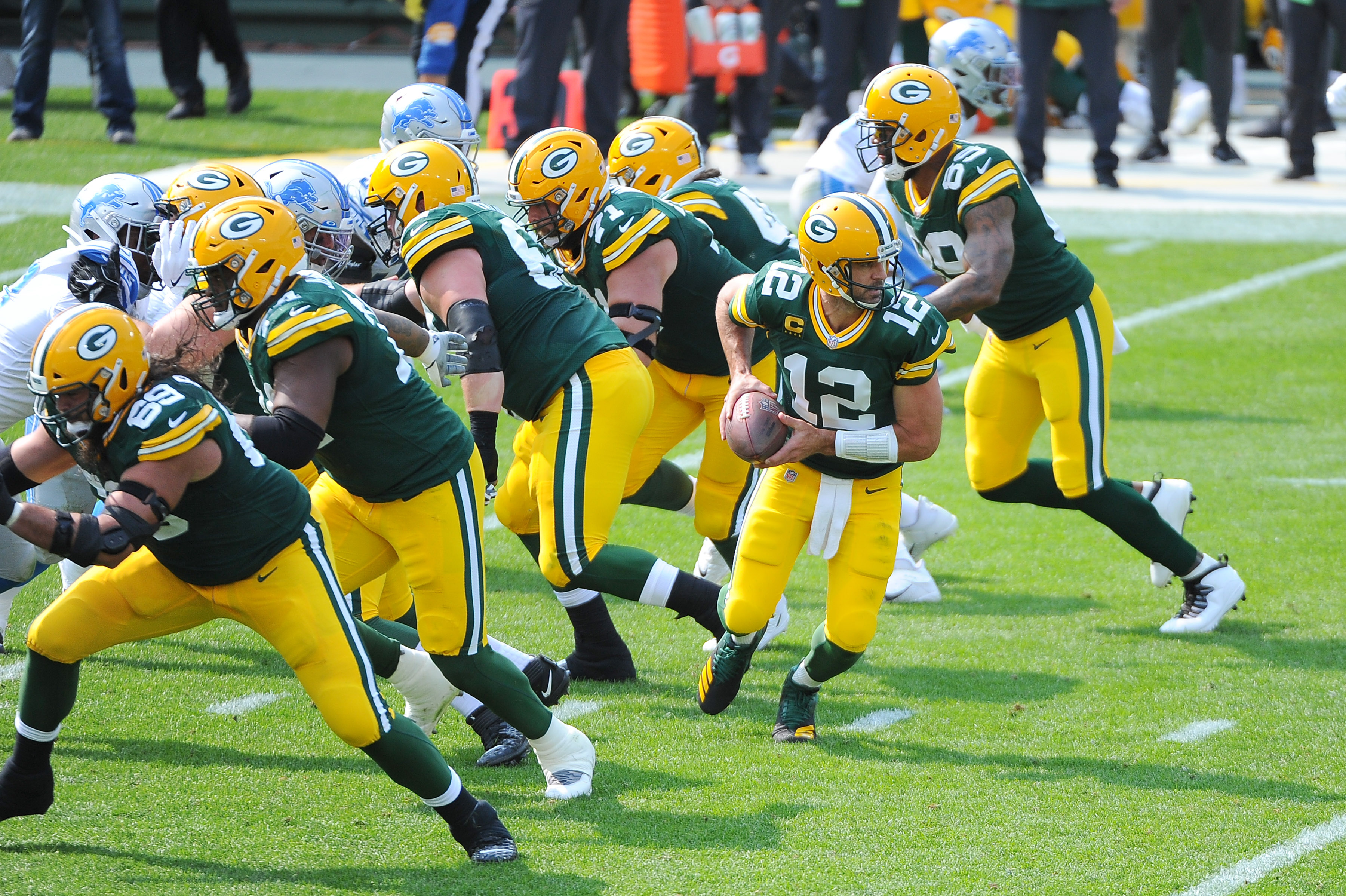 The Green Bay Packers offense is off to a flying start in 2020. After two games, the Packers are first in the league in total yards per game, first in rushing yards, sixth in passing yards and lead the league with 85 points scored. In just two games, the Packers have gained more than 1,000 total yards on offense and have scored more than 40 points in both of their games.

Last season, the Packers were middle of the pack statistically on offense. They were 19th in passing yards, 15th in rushing and 19th overall.

1. Elite Talent at the Skill Positions

The Packers have three difference makers at the skill positions on offense. Aaron Jones is an elite running back who is a threat to score any time he touches the football. He showed that with three touchdowns and 236 total yards against Detroit. That included a 75-yard touchdown dash early in the third quarter that put the Packers ahead 24-14.

They have a dominant receiver in Davante Adams who is exceptional at gaining an advantage as he gets off the line of scrimmage and who has great chemistry with his quarterback.

And they have Aaron Rodgers who has seemingly regained his form of a few years ago and is once again playing like an MVP contender through the first two games of the season. He is presently second in the NFC in quarterback rating with a 119.4 and that number would be higher if his receivers didn’t drop at least nine passes over the first two games.

To be an elite offense, you need playmakers and the Packers do have them.

2. The Offensive Line Has Overcome Injuries

The Packers offensive line has played well despite a string of injuries that would decimate many teams. Starting right guard Lane Taylor was lost for the season in Week 1 and the Packers had to adjust. Billy Turner was inactive for the season opener and did not play in Week 2 due to a knee injury. Corey Linsley left the Lions game with a hand injury and did not return. Rick Wagner suffered an elbow injury in training camp and was forced to play hurt.

Lucas Patrick has already played left guard, right guard and center in just the first two games of the season. Rookie Jon Runyan has filled in at guard in both games after injuries struck. Elgton Jenkins started Week 1 at right tackle, then moved back to left guard after Taylor went down with an injury.

Despite all this, the Packers have gotten strong play from their offensive line in the first two games of the season. In two games, Aaron Rodgers has been sacked just once and no Green Bay running back is averaging less than 4.4-yards per carry. Jones is averaging 6.9-yards per rush, Jamaal Williams 5.6, Tyler Ervin 12.7 and A.J. Dillon 4.4.

At the end of the day, the Packers patchwork offensive line is doing a good job of opening holes for the running game and protecting Rodgers. That helps make the offense go.

3. Year Two in the LaFleur Offense

The Packers have been running a derivation of the West Coast Offense since Mike Holmgren took over as head coach in 1992. But last year, new head coach Matt LaFleur brought with him a different system from the Shanahan school of offense.

Last year, the Packers ran a hybrid of the old Mike McCarthy offense and the new LaFleur system. This season, LaFleur has installed more of his offense and the team seems to have responded well to it.

Rodgers and the rest of the offense have made a second-year jump in the offense and the result is a pair of 40-plus point performances to open the season.

“I knew we were at a different place starting this year than last year, even though we didn’t have the offseason program and OTAs, and training camp was different,” Rodgers told reporters. “I really felt better about my feel within the offense and what we on paper had talked about doing. A lot of stuff has played itself out in the first two weeks. It was important.”

“It’s my second year in the offense and I’m feeling comfortable with things, which has allowed us to do definitely more than we could last year two games in,” Rodgers added.

The Packers are comfortable in the LaFleur offense in year two and it shows.

4. The Role Players Are Doing Their Jobs

The Packers offense has more talent than just Rodgers, Aaron Jones and Davante Adams and those “other” players are also doing their jobs and being productive.

Both Marquez Valdes-Scantling and Allen Lazard have been productive so far. Six of Lazard’s seven catches have picked up first downs for the Packers. MVS has been a deep threat and is averaging 22.9-yards per carry so far. Both players have caught a touchdown and are on pace to catch 56 passes each for the season.

Both Aaron Jones and Jamaal Williams have been effective receivers when called upon and Tyler Ervin has been able to gain yards on jet sweeps, screen passes and gadget plays.

The tight ends have been blocking well for the run and still have room to grow into bigger participants in the passing game.

Yes, there have been too many dropped passes in the first two games, roughly nine so far, but the offense is still ranked first in the league despite these drops.

In the first two games, 10 different Packers have caught at least one pass including Rodgers himself who caught one for minus-six yards against the Lions.

5. Game Plans Have Been Strong

The Packers game plans have been well thought out and flexible. In Week 1, the Packers attacked the Vikings inexperienced secondary that had lost three cornerbacks from last season. The passing game was dominant and Rodgers and Adams had outstanding games.

Against the Lions, Matt Patricia was determined to take Adams away and he was somewhat successful. So, the running game took over and gained 259 yards and the team again scored more than 40 points.

Pick your poison, the Packers offense will find a way to move the ball on you. The offense is based on deception where run and pass plays are run from identical formations causing momentary hesitation for defensive players. As the old adage goes, he who hesitates is lost.

While it is still early, neither the Vikings nor the Lions appear to have outstanding defenses. The offense’s effectiveness will be tested in coming weeks against better teams like New Orleans, Atlanta and Tampa Bay.

But so far, the Packers offense looks dangerous, diverse and it still has the potential to get better. And that’s good news for fans of the green and gold.