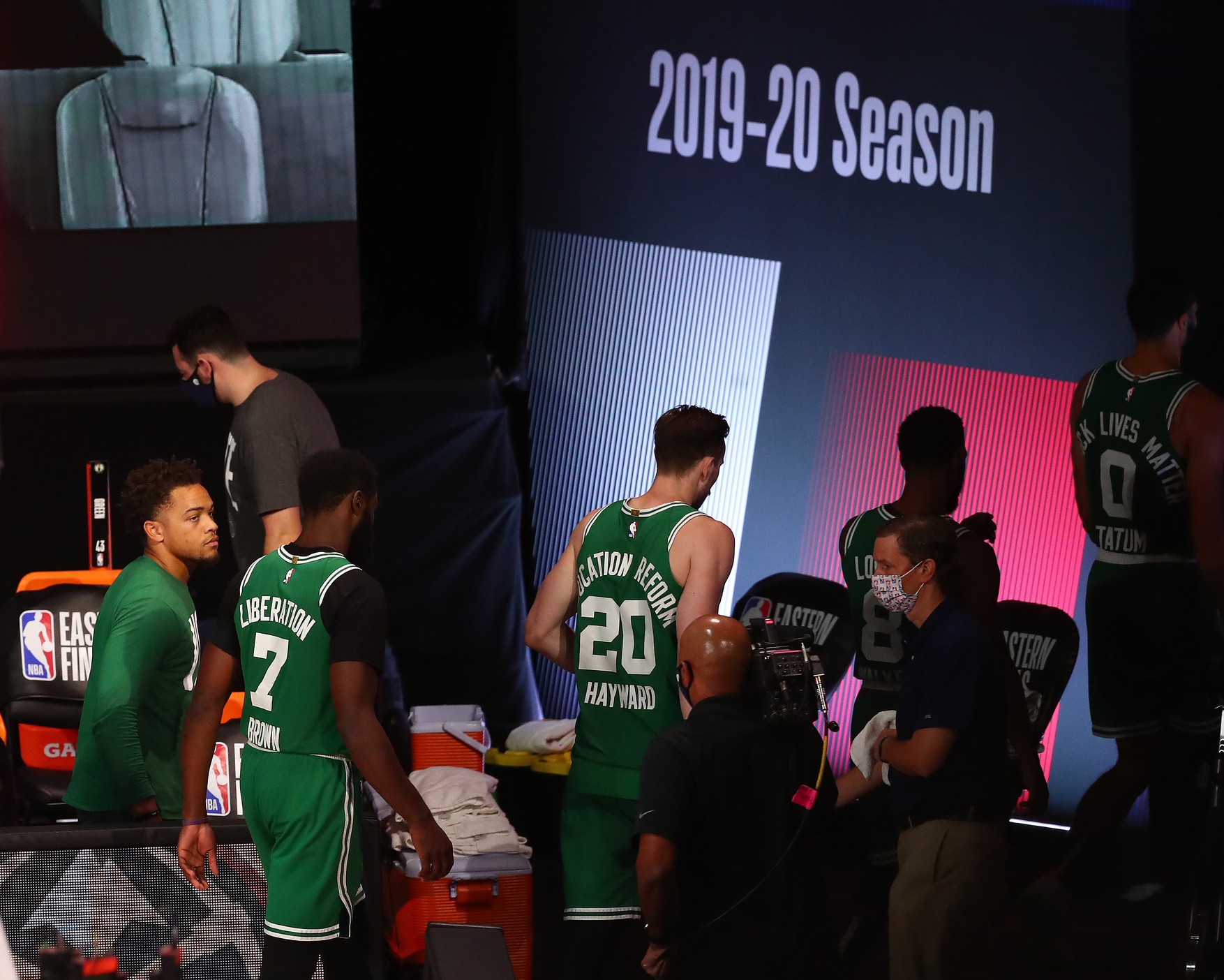 “We have to play better. We’ve gone back, we’ve talked about what we need to do different as far as anything structurally. But we have to play better,” Brad Stevens said. “I think we have to play with more assertiveness, aggressiveness on both ends of the floor… I don’t think there’s any two ways around it. We still had our chances, but they made the huge plays.”

“We still had our chances”

That could be the slogan of the series for the Celtics.“The 2020 Eastern Conference Finals: We still had our chances.”

The thing is, they still do.

Even after all this. Even after the 37-17 third quarter of Game 2 or Jayson Tatum’s scoreless first half of Game 4, the Celtics had, and still have, their chances.

Look, we all had an inkling that last year’s team had chemistry issues. And the first round sweep and easy victory over Milwaukee in the first game of the second round were fool’s gold that we rapidly recognized as the C’s self-destructed over the next four games against a (once again) overrated Bucks team.

The Bucks series was a confirmation of what we suspected–but didn’t want to believe.

They don’t know how to handle success.

They are getting out-hustled, out-worked and out-executed by the Heat.

We all love scrappy underdogs. And while I don’t have the breadth of experience in other cultures to speak about them, it at the very least seems to be a deep-seated aspect of Western culture.

Almost 2,500 years ago, the Greeks lionized their scrappy underdog army in its battles with the Persians (and downplayed the not inconsiderable advantage that their navy gave them). Shoot. Every year people run 26 miles and 385 yards because, according to legend, a Greek foot soldier ran that distance from the plains of Marathon all the way to Athens, told the city fathers that the Greeks had won the battle despite being far outnumbered, and then dropped dead.

Well into the days of their empire, the Romans told each other tales from the Punic Wars, the last time they faced a foe that could be considered superior.

The most popular heroes of the early middle ages, King Arthur, Beowulf, Roland–they all died fighting battles against the odds. Later on, every parish church had its patron saint, and most of them died horrible deaths at the hands of persecutors.

Heck, the romanticism that surrounds the southern side of the Civil War is not primarily about slavery, even though it’s dissembling to say that the war itself was about anything else. A not inconsiderable part of the romanticism is about rooting for the underdog.

The poem on the Statue of Liberty is basically an underdog motto for the whole country: ‘Send over your rejects & we’ll beat you with them.’

We love people that fight with something to prove, people with a chip on their shoulder. People who aren’t supposed to win.

And so far, the players on this team have not learned how to play with a target on their back.

And you know what?

Up to a point, that’s okay.

Do you know how you acquire patience?

You can’t become a patient person without having to actually be patient. It’s a skill that is acquired only by doing.

Same way with being the team with a target. The team that is expected to win. We’re not born with this mindset–or if we are, we’re basically jackasses.

The culture imbued in us, if not life itself, teaches us how to be underdogs. Life is a sport for underdogs–we all know what it’s like to try and fail. But it’s not the failures that define us, it’s the fight–or at least that’s what we like to tell ourselves.

The mindset required to be the top dog is acquired through effort, and I’m going to be honest, the C’s have not put in the effort.

On Monday afternoon, Marcus Smart said that he hates losing more than he loves winning. You will find similar descriptions of Magic and Larry in Jackie Mac’s When the Game Was Ours.

He also said that he wasn’t the only guy on the team that felt this way.

That, I need to see.

I need to see the rest of the team and the coaching staff do more than pay lip service to the notion that they’ll do what it takes to win.

Both Miami and Boston know one thing for certain: Boston is the better team. Miami knows that they’ve won these games by outworking Boston.

Boston knows this is the case as well.

My question is: What are the C’s prepared to do about it?

NBC Sports: Why Ainge was ‘very frustrated’ after Celtics’ loss to Heat | C’s clutch performance against NBA elite both brutal and concerning

MassLive: Danny Ainge frustrated after Boston Celtics’ Game 4 loss to Miami Heat, but ‘I don’t think this team is done yet’ | Boston Celtics had every opportunity to avoid a 3-1 deficit to Miami Heat in conference finals – Tom Westerholm | Bam Adebayo injury: Heat center ‘will be ready to go’ in Game 5 of the Eastern Conference Finals

The Athletic: King: The Celtics just can’t get things working right. I can relate