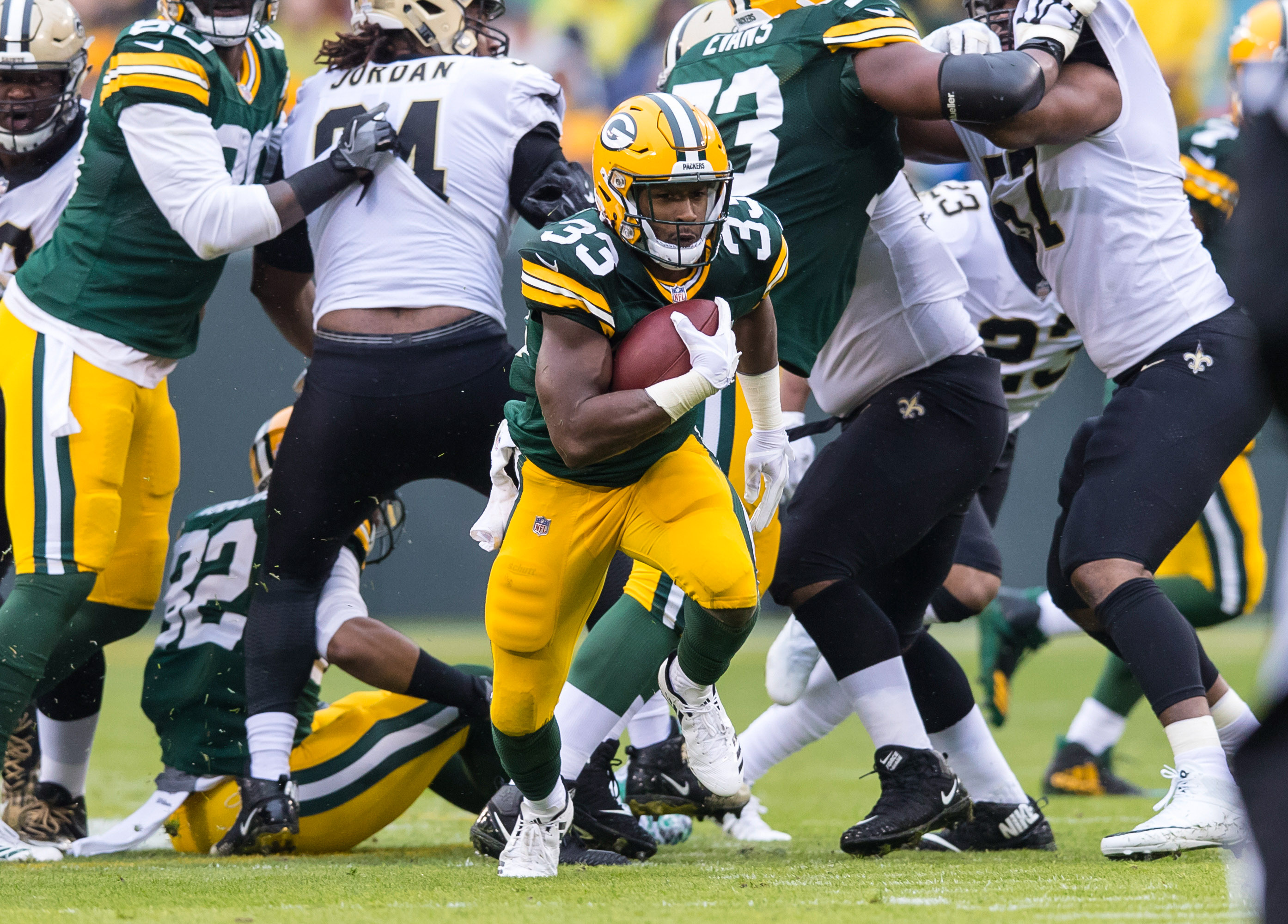 The Green Bay Packers travel to New Orleans to take on the New Orleans Saints. The Packers enter the game with a 2-0 record after beating the Lions 42-21 last week at Lambeau Field. The Saints are 1-1 after losing to the Las Vegas Raiders on Monday night in Vegas 34-24.

Green Bay leads the all-time series between these two teams 16-9-0. The Saints have won the last two meetings including the most recent clash in 2017. The Packers have lost the last three meetings in New Orleans and have not won there since 1995.

Both these teams were considered contenders in the NFC so this game does have potential tiebreaker implications come January. Here is a look at six key factors that will determine who wins this big showdown on Sunday night:

Kamara is an all-purpose threat and with top receiver Michael Thomas out of the lineup for the Saints, he is the top receiving target for the Saints in addition to being their leading rusher. Kamara leads the team with 14 catches including nine against the Raiders. He also ran for 79 yards and two touchdowns in Las Vegas.

The Packers have struggled to cover athletic running backs running pass patterns out of the backfield in recent years. They need to make sure Kamara doesn’t beat them consistently enough to keep the New Orleans offense on the field by picking up first downs on quick passes. Kamara is certainly capable of beating linebackers on pass patterns and Christian Kirksey, Oren Burks, Krys Barnes and Raven Greene may have their hands full trying to contain Kamara.

It is not clear who will be available for the Packers along their injury-riddled offensive line. Obviously, keeping Rodgers protected is a key to the Green Bay offense. Rodgers has been sacked just once in the first two games, although on paper, the Saints have a better pass rush than the Lions and the Vikings who were without Danielle Hunter.

In the first two games, New Orleans totaled six sacks with Trey Hendrickson leading the way with two. Hendrickson is listed as questionable with a groin injury but was a limited participant in Friday’s practice for the Saints.

Billy Turner may be back in the lineup at right guard with Rick Wagner the likely starter at right tackle. Center Corey Linsley suffered a hand injury last week against the Lions and may not be ready to start in which case Lucas Patrick will likely step in again.

If Rodgers has time to throw, the Packers passing game should be able to move the ball against almost anybody.

The Packers will likely be without Davante Adams this Sunday night as he is struggling with a hamstring injury and is officially listed as doubtful. That means that other receivers will have to pick up the slack.

Marquez Valdes-Scantling and Allen Lazard are likely to be the top two wideouts with Tyler Ervin and Equanimeous St. Brown also likely to get some reps.

Look for running backs Aaron Jones and Jamaal Williams to also feature prominently in the passing game this weekend.

Raiders tight end Darren Waller shredded the Saints on Monday with 12 catches for 105 yards and a touchdown. The Packers have not thrown much to their tight ends yet this season and will likely be without rookie Josiah Deguara who is listed as doubtful with an ankle injury.

The Packers may try to get the ball to Robert Tonyan, Marcedes Lewis and Jace Sternberger more as well although through two games, Tonyan leads all tight ends with two total catches while Lewis and Deguara have one each. Sternberger has struggled with drops early and has yet to catch a pass.

Last season, Rodgers had some of his best games when Adams was out of the lineup. He will need to spread the ball around much like he did against the Raiders last season.

4. Get Aaron Jones Involved in the Offense

The Packers steamrolled the Lions with Jones having a career-best 168 yards rushing and another 68 yards receiving on four catches, but the Saints run defense is solid, ranking eighth in the league through two games and allowing just 101 yards rushing per game.

Look for the Packers to feed Jones more often. Even if the running game isn’t clicking like it did against Detroit, the Packers must make sure the Saints defense honors the run enough to make the play-action pass effective. The Packers will get the Jones the ball consistently, whether it’s on rushes or passing plays.

Look for Jamaal Williams and Tyler Ervin to also play a larger role in the offense with Adams unavailable.

5. Get Drew Brees Off His Rhythm

Brees has not looked as sharp in the opening two weeks of the season as he usually does. The future Hall of Famer has a respectable quarterback rating of 93.5 and has thrown three touchdowns and just one interception.

Brees is averaging just 6.9-yards per attempt, as compared to Rodgers who is averaging 8.2. Only two of Brees’ 44 completions have been in the air more than 20 yards and it has some scouts and media analysts questioning his arm strength at the age of 41. While Brees may not be able to fling the ball downfield as well as he used to five years ago, you underestimate him at your own peril.

Brees is a master at the short passing game and his offense is designed to turn a few of those short routes into splash plays.

The Packers pass rush must at least disrupt Brees’ rhythm or he can pick apart a defense with great efficiency. Brees was only sacked once in the first two games but the trio of Preston Smith, Za’Darius Smith and Rashan Gary are more than capable of getting to the quarterback. Kenny Clark, who missed last week’s game with a groin injury suffered in the season opener, is listed as questionable. It would certainly give the Packers defense a boost both against the run and rushing the passer if Clark is able to play on Sunday night.

6. Get Better Play from the Safeties

Former Packer Jared Cook is still a quality tight end and the Packers have had a lot of difficulty staying with good tight ends over the past few seasons.

The Packers will need Adrian Amos and Darnell Savage to play well and help limit the potential damage Cook can do in the passing game. Neither safety has played up to expectations in the first two games of the young season.

Thus far, Cook is second on the Saints with seven catches for 93 yards and a touchdown. Like Kamara, Cook is a dangerous receiver who the Packers cannot let beat them.

The Saints have looked shaky so far this season and were outplayed by the Raiders on Monday night. It helps the Packers that New Orleans is coming off a short week and had to fly back from Las Vegas to boot.

It is unsettling that Brees is facing criticism and that people are doubting he can still get the job done because Brees is a competitor and remains darn good quarterback.

This is by far the toughest game the Packers have had this season and winning now in New Orleans could mean the Saints have to travel to Lambeau come playoff time.

If Adams were available, I would be more inclined to pick the Pack. This game will be close and go down to the wire, but the Saints need this one more than the Packers and they are at home.