Who:  The New Jersey Jets vs. the Indianapolis Colts.

When:  4:05 PM Eastern, Sunday, September 27th. TV: CBS. WTF is this? There is no reason, zero, nada, none, for the Colts to be playing a late afternoon game against a team east of the Mississippi. This is flat stupid.

If there’s a plus side, it’s that Kevin Harlan (plus his partner, the oft-concussed Trent Green) is on the call. Finally a break from the Spero Dedes of this world.

I’ll say it: after two games, I think the Colts are an average team right now (key words). The defense was embarrassing in Week 1, yet somehow managed to come out of it as the league’s 2nd rated unit, which really only goes to show how archaic the NFL is with stats. Literally no one, not even the people who work at W. 56th St., would’ve said the Colts were the 2nd best defense in the league.

Last week was much better, but I think it said more about Minnesota than the Colts. The Vikings looked like a dumpster fire after the first drive – and the first drive would’ve ended were it not for a dumb penalty by Denico Autry. They had no clue, and clearly the decision to trade Stefon Diggs was a really bad one. You put Diggs *and* Thielen out there? I would’ve liked those odds.

The Jets are so banged up right now they’re down to one wing, none of which matters once the game begins.

It doesn’t begin well for the visitors. The Colts spin a perfect 8 play, 80 yard opening drive mixed with bruising runs and perfectly executed play action. Old man Rivers hits Zach Pascal for a 4 yard strike to put the first points on the board.

Things begin to cave in on Darnold. Early in the 2nd, the Colts convert a forced fumble by Justin Houston into a 21 yard TD grab by Eugene Hilton. Just before halftime, the Colts turn an interception by Julian Blackmon into an NFL record 69 yard field goal by Derek Schultz.

Not so fast. After re-fueling during halftime, the Jets come out like a different team. The running lanes the Colts enjoyed? Closed. The clean pocket for old man Rivers? Gone. Darnold begins to look like Broadway Joe, circa 1967.

The Jets storm back, and as the 4th quarter begins, they have the ball at the Colts 32 with the game tied at 17. Even though the sun is beginning to set, there is still bright sunlight where the Jets have the ball.

Darnold spots Chris Hogan open on the side of the end zone. He lofts it up, and…just as Hogan is about to secure the catch, a blur appears on the screen. Although no one can really tell because of the sunlight from the open roof, what appears to be a remote controlled jet vaporizes the football and then crashes into the first row of the seats, bursting into flames. No one is injured, because social distancing y’all, and the pass is ruled incomplete.

A bewildered Adam Gase tosses the challenge flag, even though he couldn’t see a damn thing either. Referee Craig Wolstad heads to the monitor wearing a welder’s helmet. After several minutes, he upholds the ruling on the field, stating “I just couldn’t see what happened.”

On the next play, Khari Willis picks off Darnold, bobbing and weaving his way to a 78 yard score.

With 6 minutes remaining, Jonathan Taylor rumbles 21 yards to tack on the final score.

The origins of the remote jet plane are never discovered, though CBS cameras do catch a 290 pound, Speedo-wearing Andrew Luck sunbathing in the same end zone.

The author is lucky to know not one, but two beautiful ladies who just so happen to be Jets fans.

We’ll start with Marcia first. She has bartended in the NYC area for longer than she’d probably like to admit, but this just means she knows all of your BS, and she didn’t throw any BS with her (shortened due to working too much) take: “We’ve been really busy and I haven’t gotten to watch that much, but the Jets SUCK.” Difficult to disagree with this take. Thank you, #Marcia!

Next up is Blair. She also lives in NYC, and works in advertising. If you’re one of those guys sitting around watching football only to find yourself thinking “I need to reach out to my doctor,” because of an ad for ED, then you know Blair. She’s going to kill me for that (I love you #Blair). Actually, I don’t know for sure if she’s ever helped create any ED ads, but I do know she has done a lot of work in the medical field.

She’s been a Jets fan for a long time, and is currently in hate mode status with them: 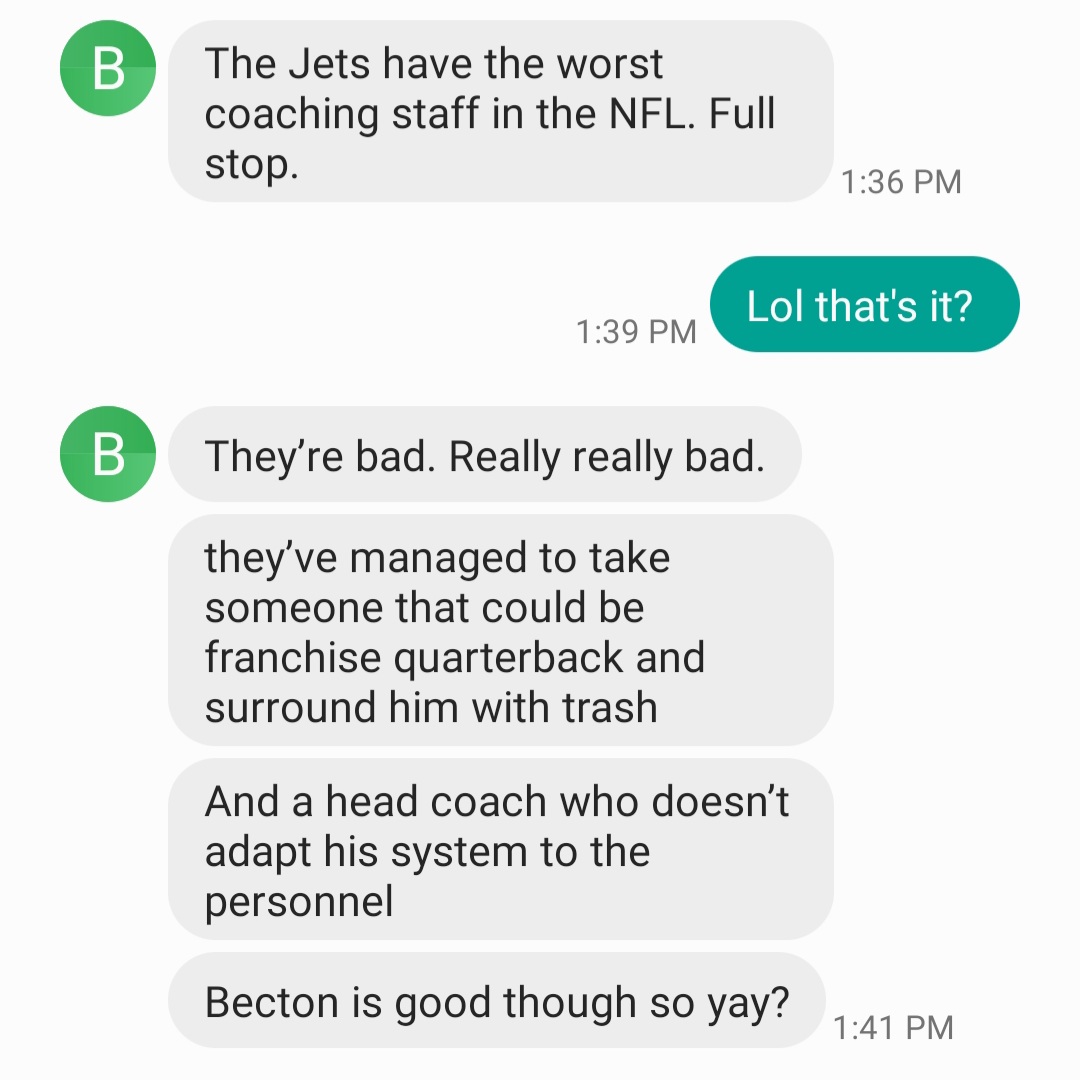 It’s tough to argue with fans of the other team, but I keep thinking about the Colts defense against Jacksonville, about recent Colts-Jets history, and about the 10.5 spread, and I’m still skeptical.

But not *that* skeptical. Maybe.