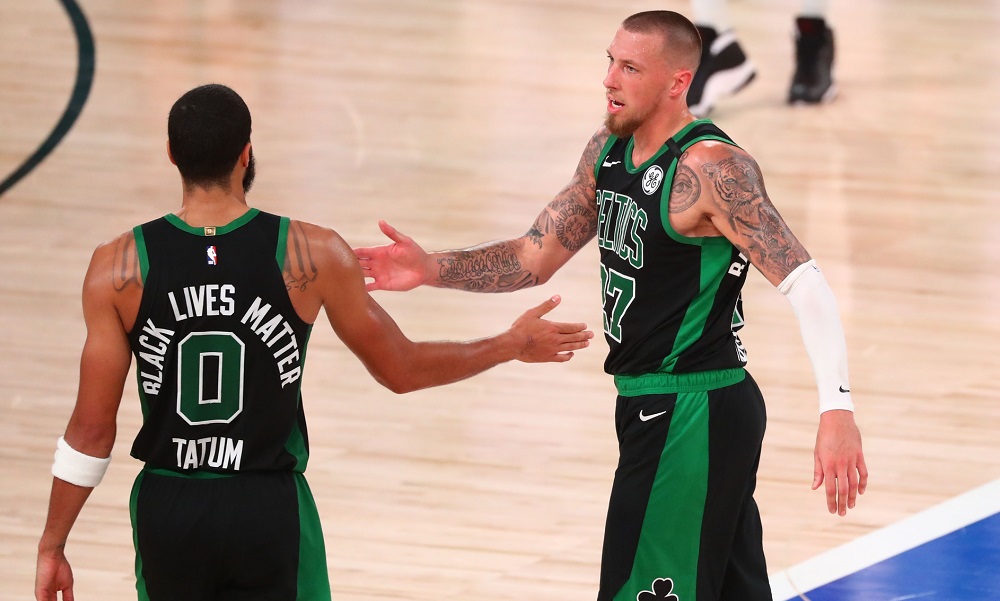 The Celtics looked lost early. The Heat jumped out to a 12-point lead as Boston bricked 3-pointers, and Duncan Robinson scored frequently both behind the arc and driving to the rim. Boston played sloppy defense as well, fouling jump shooters and allowing easy drives to the rim. The Celtics looked a little like a team ready to tear down the shop and head home.

It was Jaylen Brown who started the momentum shift. With Miami up nine early in the third quarter, All-Star big man Bam Adebayo caught the ball on the blocks with Brown defending and teammates cleared out to give him space to operate. Brown held his ground as Adebayo tried to maneuver towards the basket and forced a turnover. Brown then raced down the floor and finished a layup in transition.

The Heat would go more than four minutes without a field goal early in that third frame as Boston ratcheted up its intensity. It was Brown, sprinting out in transition, that finished a layup that gave Boston a lead with 7:50 to play in the third frame.

The Celtics were unrelenting on both ends. They answered every Miami make with one of their own. Jayson Tatum and Kemba Walker kept throwing haymakers and a Walker pull-up 3-pointer with 4:26 to play in the third frame had Boston owning a double-digit advantage.

That third quarter was a glimpse of a Celtics team that was hellbent on keeping its season alive. Boston was not content to go down without a fight.

“What I remember from halftime is Kemba saying, ‘We just need to settle down a little bit,'” Jaylen Brown said. “We just had to dial in a little bit, and once we did, I felt like we were fine.”

It was a directive that Boston took to heart. As a result, the Celtics have basketball left to play. […]

Anyone who watched Boston slog through the first half might’ve doubted that such a turnaround was possible. Like in Game 4, the Celtics seemed to be sleepwalking much of the time, allowing the Heat to gobble up several loose balls and settling for far too many jumpers instead of aggressively attacking the paint.

That changed, however, in the second half. Boston came out swinging in the third quarter and looked like a completely different team, at one point going on a 20-3 run to turn a 60-51 deficit into a 71-63 lead. The Celtics didn’t relinquish the advantage the rest of the way.

Coming into Game 5, the fans on my Twitter timeline were ready to support an inspired Celtics squad, one desperate to stay alive in the playoffs. Instead, the Green were anything but that. They started out by making just 1 of 12 shots, including 1 of 8 from behind the arc. After the first quarter, thinking how I might write the headline for this piece, the words “no-show” and “meek” were possibilities.

We fans don’t ask much of the Celtics, just that they play harder than the opponent. If they do, the score will take care of itself. But that first quarter was discouraging as their heads didn’t seem to be in the game.

Then the Cs began to show some energy in the second quarter. The spark came from – surprise! – Enes Kanter, who scored 8 points in 9 minutes on his pet postups and putbacks. Boston won the quarter, 33-32.

Perhaps that encouraged them. As noted above, Kemba – the veteran with little playoff experience pre-Boston – offered soothing words at halftime. Whatever it was, the Celtics came out and delivered probably their best third quarter of the entire season. Led by Tatum’s 17 points in the period, they stunned the Heat and took a 92-83 lead into the fourth.

With 12 minutes standing in their way for a Game 6, the Celts kept the heat on the Heat. This time, there was no let-up, no blown lead. Jaylen – who played hard all night – led the way with a dozen points in the period, with his two consecutive triples from the left corner being the backbreakers. Final, 121-108.

The Celtics needed to find their spirit to stay alive in this roller coaster postseason. They did that, and now they must keep that fire burning for Game 6. Being in the bubble will help, as obviously they will not have to face a hostile Miami crowd. In the bubble, anything really is possible.

One game at a time.

MassLive: Jaylen Brown, Boston Celtics have been in bubble for months, aren’t ready to leave: ‘We were going to go down fighting’  |  Here’s everything the Boston Celtics said after their Game 5 win over the Miami Heat

Boston.com: 5 takeaways from the Celtics’ Game 5 win vs. Heat

NBC Sports Boston: Celtics players stepped their game up in Game 5, and so did Brad Stevens

Globe: It took four and a half games, but it looks like the Celtics solved the Heat puzzle  |  Their season down to its final half, Celtics roared to life to force Game 6, and other observations  |  With Celtics erupting in Game 5, it’s time to think big, like Game 7 big

The Athletic: As ’Celtics basketball’ reappeared, Brad Stevens’ team made this a series again  |  What changed in Celtics? They finally decided to dominate Heat in crunch time

On Page 2: Theis wins this war

Theis finished with a double-double of 15 points and 13 rebounds.

And when he wasn’t scoring or rebounding, he was making plays defensively such as blocking shots or drawing charges which included an offensive foul against Miami leading scorer Goran Dragic with 4:27 to play.

There were other Celtics whose play was indeed instrumental in the team’s success.

But as we have seen in all of the Miami victories in this series, there was at least one wild-card performer whose play was vital to the Heat getting the win.

In Game 5, that X-factor was Theis.

One of the season’s themes is the vendetta that officials seem to wage every night on the Celtics’ center. “The War on Theis” is the catchphrase that sums up how often he gets the bad whistle. It’s as if the big guy stole the referees’ lunch money or something.

In Game 5, Theis won the war and made an enormous impact on the win. In the second half alone, he had 11 points and 10 rebounds. He even got the benefit of an offensive foul call on Goran Dragic, who’d been keeping Miami in the game. Dragic kneed Theis squarely in the testicular zone, and the Heat challenged the call but lost. Dragic fouled out on that call and the game was effectively over.

Good to see Theis get some justice, and some credit.

And, finally… A dark anniversary

The Celtics’ tragic history of Len Bias and Reggie Lewis dying in their 20s came very close to being even worse. Much, much worse. But Paul Pierce survived his brush with death.

20 years ago today, Paul Pierce was stabbed 11 times in the back, face & neck.

He played all 82 games the following season. pic.twitter.com/Wo4XvVsyp3

As we’ve said before in this space, Pierce gets an unfair amount of hate from fans of teams not named the Celtics. They often mention the 2008 wheelchair incident; they never mention the stabbing. After his recovery from that attack, Pierce had the will to return to the game quickly, and thrive. That’s one of the many reasons we love the guy.