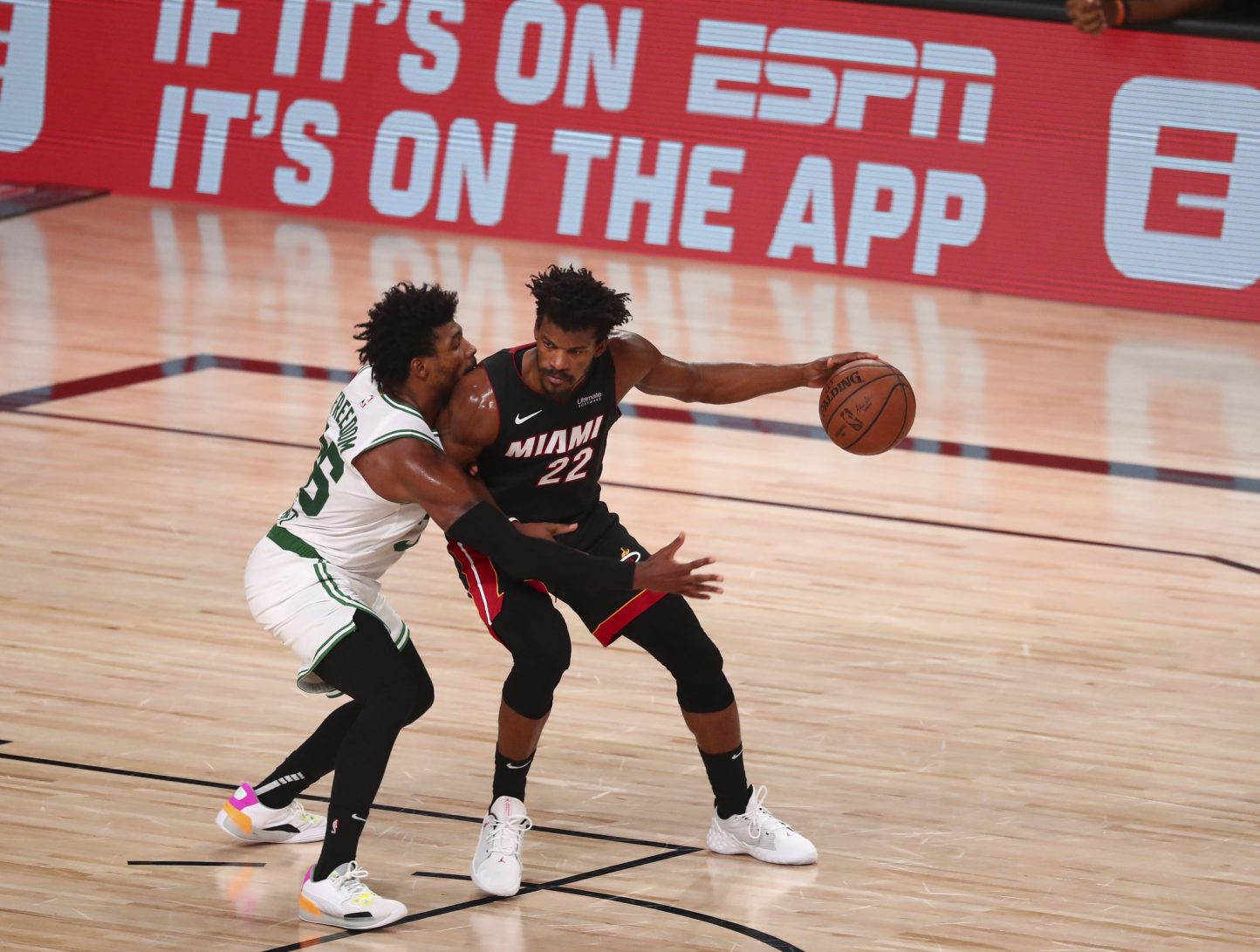 So after my sterling run of recapping playoff wins, I’ve become snakebit, and am now forced to put a postmortem on the Boston Celtics’ final game of 2020. While it doesn’t change that this season in total was successful, Game 6’s loss was agonizing: The Cs started slow, began building momentum and correcting mistakes, and made it all the way to a 6-point lead in Q4 before the defense and effort collapsed in hideous fashion, ending in a 113-125 rout.

Until that meltdown, they went out swinging, with four players scoring 20 or more: Jaylen Brown (26-8-4 and 3 steals), Jayson Tatum (24-7-11-2-1!), Kemba Walker (20-2-5) and Marcus Smart (20-8-2 and 2 steals). But a mediocre shooting night from Hayward (12 points on 41%, with some agonizing misses) and minimal offensive contributions from the rest of the roster, plus a failure to maintain defensive intensity team-wide, meant the Cs were heading home earlier than they’d like.

Neither team looked offensively spry to start. But the Heat got a quick early lead almost entirely on free throws.

Celtics back to playing timid, hesitant basketball instead of attacking full speed on both ends of the floor.

not trying to replicate the formula that won you two games<<<<

When the #Heat goes man-to-man, the #Celtics are looking to go at Duncan Robinson. In the zone? Still searching out ways to get shots from wherever he's located. The #Celtics up 15-14

After the Celtics built some small momentum, Miami got hot from deep. Things weren’t helped by Jaylen (and other Boston defenders) making uncharacteristic mistakes:

Brown helping off shooters a little too much early.

This series has trained me to have zero reaction to the first half.

Yet for all that Miami’s lead wasn’t much at the end of Q1:

Miami hit some garbage shots, hope they stop that and that Tatum wakes up (like he usually does)

Celtics seem to have a good control of Miami's zone at this point of the series. Celtics creating decent 3 point looks and went 6/14 from deep in the quarter which is a great sign. Boston has enough good shooters that taking 50 3s tonight gives them a great chance to win.

The Celtics and heat stayed apart by about that margin for the first third of Q2. Boston’s offense warmed up somewhat, but Tatum having another mostly cold start didn’t help; nor did a handful of absurd defensive lapses.

Kemba only has 3 FGA.

Time to get going…

the boston offense looks pretty good against both 2-3 and man-to-man miami defense, but they're not getting stops they should be able to get, which is why they're down

It appears they heard us:

Boston came out energetically to start the second half, but stayed a few points behind Miami due to some dumb fouls, the aforementioned difficulty with getting stops and a few smoked bunnies:

Someone tell Hayward this is an elimination game. Christ. POINT BLANK LAYUP.

Boston blew out Miami in the third quarter of Game 5 because their defense was fantastic. Their ball pressure against dribblers and passers was great. No pressure on Miami at all tonight. Way too many clean passing lanes leading to open shots.

Hayward missing almost every shot he took, an uptick in turnovers and Boston failing to guard Miami’s three-pointer shooters both took a significant toll.

(Don’t care that it was Andre Iguodala shooting those threes; you guard him if he’s on a streak, which he was.)

Iguodala was a .298 percent three point shooter this season and he chooses game 6 in the ECF to pull a horse shoe out of his ass.

Lucking out due to Heat misses (and screwups) and some much-needed intensity on both ends from Brown and Smart, the Cs were down just a pair when the Q3 buzzer sounded.

Despite the Cs retaking the game to start Q4, things were far from great:

Jaylen Brown complaining "You can't do that shit" to the officials.

Here’s the reason why Jaylen Brown was rightfully pissed after his dunk. pic.twitter.com/7Q3q8Yux3Y

Fortunately he wasn’t hurt, but all Celtics fans know how often Brown has been undercut on drives in these playoffs. It’s pretty goddamn annoying.

I'd go with more shot attempts for Jaylen Brown and less for Marcus Smart over these last seven minutes.

offense rushed, lot of guys feel like they're trying to be a hero rn and for some reason tatum isnt touching it

The teams traded leads back and forth throughout the first half of Q4, but Miami always appeared to be just a step ahead. And Daniel Theis fouling out with over five minutes to go was seriously detrimental to the Boston defense.

Time was running out on the game, and potentially the season. And shit like this—resulting from Butler deliberately flailing to generate contact—just made it all seem poisonous.

Smart's is bleeding onto the floor.
Breen: "He's shaken up."

Things like this, but mostly the Heat’s overall relentlessness, eventually collapsed the Celtics. What had been close for the game’s entirety suddenly turned into a double-digit Miami lead, and that was that.