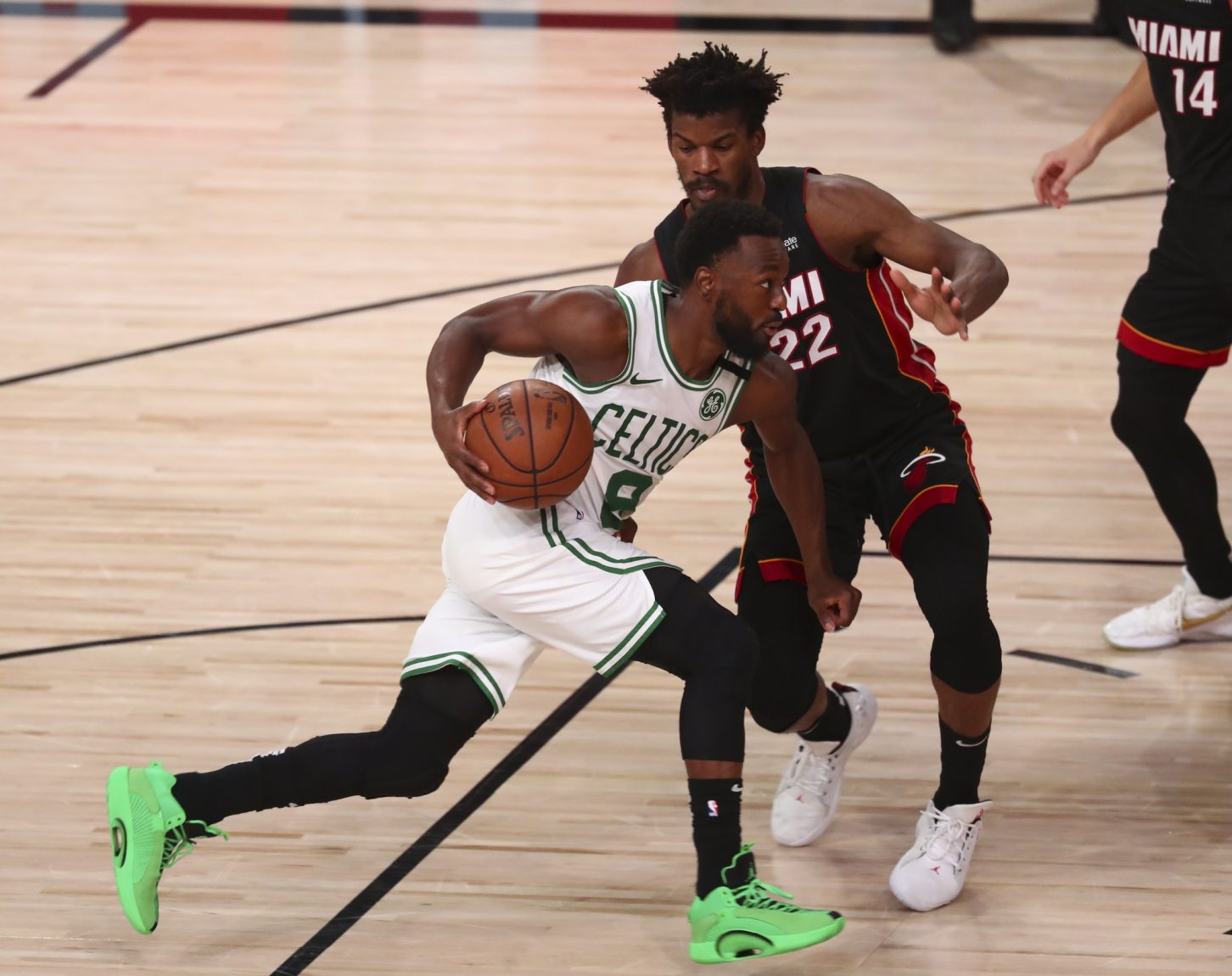 Covering a team’s final game of the season is always hard. Unless it’s a championship victory, you inevitably don’t look at the game itself, but also the overall season. In the wake of the Boston Celtics’ ECF loss, which was as much of a final-minutes meltdown as you can imagine in your worst sports nightmares, I won’t be an exception to this trend.

1. Miami was the better team when it mattered most.

Been a lot of kvetching, including some by me, about which team was or wasn’t better, or when said “betterness” was in effect. (That’s a really weird way to phrase it but I think you all know what I mean.) If you add up the sections of each game where either team was dominant, Boston probably wins that battle: The Cs were better statistically and by the eye test in both the first halves of Games 1 and 2, the entirety of game 3, the second half of Game 5 and…let’s say…1.5 quarters of this game. That gives the Heat the latter halves of 1 and 2, none of 3, all of 4, one half of 5 and 2.5 quarters of 6. Boston has a slight edge by that admittedly arbitrary system that I’m sure at least someone can debunk if they stare at it long enough.

Except wait, I’m gonna debunk it myself, because all that “better team” shit goes out the window if you don’t win the games. Miami almost always had an extra gear to go to when it counted the most, more often than Boston did. That’s indisputable. I do think that the Heat may have earned themselves an invitation to a beheading by LeBron James and the Lakers, but…I said that about their series with the Bucks, and look how that turned out.

2. Boston slipped off the gas once they had that fourth-quarter lead.

Some of what happened after the midpoint of Q4, when Boston had this lead, is understandable. The Cs were frustrated despite having the lead because things had gone still gone against them, including some utterly absurd non-calls, most notably this one against Jaylen Brown:

Here’s the reason why Jaylen Brown was rightfully pissed after his dunk. pic.twitter.com/7Q3q8Yux3Y

So they made some frustration fouls of their own, including one by Theis on Bam Adebayo that got him ejected and another by Kemba Walker that was his fifth, meaning he had to walk on eggshells for the game’s remaining time. Erik Spoelstra and his squad smelled blood and just blitzed, with Jimmy Butler, Tyler Herro and Adebayo leading the charge. The ability to execute as a team dissipated, even though there were minuscule stretches during those last gruesome minutes in which effort by Brown or Tatum made the Cs look like themselves and not a team that’d been gut-shot.

3. There is no one scapegoat to hang this loss on.

A lot of people are going to blame Marcus Smart for feeling himself too much and chucking long after his actual hot streak had faded. A lot of people will blame over-reliance on the three-point shot. Others may blame Tatum’s slow start, even though he was contributing in other ways when he couldn’t score the basketball and he still ended up with a near triple-double. Some will blame a defense that shifted from airtight to unprepared late in the game. And a hell of a lot of people are already blaming Brad Stevens.

None of those people or things are solely to blame for this. Including Stevens. This series did involve him being outcoached for long stretches…but whatever flaw (or excellence) there is in Brad’s plans won’t matter if the guys on the floor don’t execute (or improvise successfully as needed, depending on the context). Everyone screwed up at one point or another, and the sum of said screwups was too large for the team to bear. (Also, all the coaching in the world won’t matter if Bam Adebayo figures out how a team contained him the last game and makes that scheme impossible to repeat, which is exactly what happened.)

Let me be clear: I think “HEAT CULTURE” is as much bullshit posturing as it is rigid fitness regimens and disturbingly specific body-fat requirements. I think Pat Riley is a cornball, and his affectation of the dress, bearing and even (to some degree) the speech patterns of a silver-screen Mafia don is laughably absurd, even more so given that players, media and many fans accept it and view him like the uber-boss of the Five Families. (Phil Jackson’s Zen master shit is just as corny. At times the “jes’-folks-but-make-it-Kaizen” bearing of Stevens can be corny. Most coaches aren’t cool!) HOWEVER. When exemplified and executed by the right players, and shepherded by a coach as clever as Erik Spoelstra…the Heat’s schtick works. It certainly worked over the Celtics in this series. I can slander and joke, but they beat my favorite team’s collective ass fair and square.

4. The Jays balled out, for the most part.

At end of day, that’s an accurate assessment of their performance. Even taking into account Tatum’s shooting woes to start, or Jaylen’s handful of poor decisions in the first quarter. They weren’t perfect, but for the vast majority of the time they saw the court, they gave it their all.

5. This season WAS NOT a failure.

I would say that the 2019-20 season has easily been the most pure fun I’ve ever had as a Celtics fan and writer. Certainly the most since I became a diehard fan in the last 7 years or so.

The sports punditry industrial complex picked the Cs as first- or second-round bounces before the season started. So did many Celtics fans. Including me. (I figured either a loss in a hard-fought second-round series, which almost happened, or being utterly waxed in an ECF by the Bucks, which obviously didn’t happen.) We got to watch a team simultaneously rebuild and make a deep playoff run thanks to a unique mix of stars (Kemba, Jayson and Jaylen) near-stars (Theis, Smart and Hayward) and roleplayers (Grant Williams, Brad Wanamaker, Robert Williams and even Kanter, who for all his issues was good for this team’s chemistry, taking DNPs and short stints without complaint). It’s hard for me to agonize too much over that, even if the specific ending to the season, in this game, totally and completely sucked (and arguably didn’t have to happen).

The Celtics need bench depth through internal improvement or low-stakes trades. They need Brad Stevens’ coaching style to evolve and avoid stagnation. They gotta figure out Gordon Hayward’s place on this team due to that bigass player option. And the youngest players still have growing to do, some more than others. (Romeo Langford is a colossal question mark due to injury, Carsen Edwards is absurdly raw and both Grant and Robert Williams still have refinements to make.) But this Celtics squad is a damn fine team to root for, one that exceeded expectations and came within two wins of a Finals berth and, as a bonus, is one of the NBA’s most thoughtful and outspoken squads. I think that’s pretty all right.