In his first transaction since dealing Jean-Gabriel Pageau to the New York Islanders at the NHL’s trade deadline on February 24th, Senators general manager Pierre Dorion dealt a 2020 fourth-round pick to the Florida Panthers this afternoon in exchange for defenceman Josh Brown.

The 26-year old Brown is a right-shot defenceman who has spent parts of the past six seasons in the ECHL, AHL and NHL. Over the past two seasons, he has played in a combined 93 NHL regular season games amassing four goals, 10 points and 67 penalty minutes over that time.

Standing 6’5” and weighing 217 lbs, Brown averaged 13:25 of ice time per game last season while leading the Florida blue line with an average of 6.14 hits per game. His size and physicality are obviously attributes that the Senators covet, especially in light of Mark Borowiecki’s falling out with organization and his decision to test the free agent market.

The Senators do need to add some defensive depth on the right side. Currently on their roster, only Nikita Zaitsev and Artyom Zub are natural right defencemen. Granted, there is a possibility that the Senators could re-sign Ron Hainsey as an unrestricted free agent or that the organization could allow Erik Brannstrom to play on his preferred off-side.

It remains to be seen whether the Senators will continue to seek ways to improve their defensive corps, but as a restricted free agent without a contract, Brown will offer the organization some inexpensive defensive depth.

The Senators should not expect much more than that however.

Brown has barely played any special teams minutes over the past two seasons. He only had 12 total seconds of power play ice time last season while averaging only 26 seconds of shorthanded ice time.

A deeper look into Brown’s underlying numbers at five-on-five however, reveal an unflattering picture.

Over this 94-game sample spread out across two seasons, the opposition generated the majority of the shots (CF%), unblocked shots (FF%), shots on goal (SF%) and expected goals (xGF%) when Brown was on the ice at five-on-five. Although the Panthers scored a higher percentage of goals with Brown on the ice this past season, judging by the rest of the metrics and the expected goals percentage, the numbers reflect a player whose actual goal results benefited from good luck.

Evolving Hockey’s data portrays Brown as a player who generates all of his value last season through his play in the defensive zone. Although Brown’s offensive shortcomings negatively undermined whatever positive value he created in 2018-19, Brown’s offensive performance improved enough to help make him a more valuable player.

HockeyViz.com’s isolation visuals reflects the positive impact that Brown had in the defensive zone. 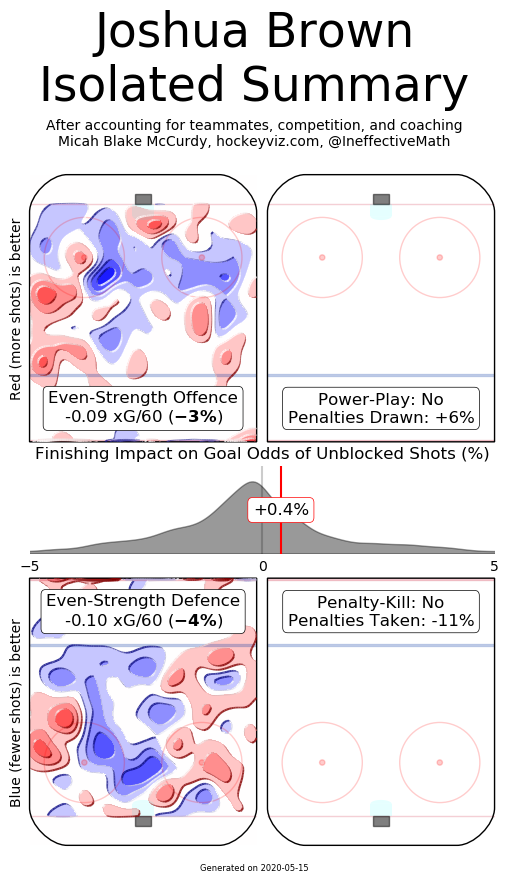 Brown will likely never be mistaken for a top-four defenceman, but in limited and sheltered minutes, he could be a short-term placeholder for the Senators on the third pairing.

At least that is what head coach DJ Smith is likely hoping for from a player that he is quite familiar with.

Josh Brown was DJ Smith’s captain when they won the OHL & Memorial Cup in 2015.

Brown & Dakota Mermis were largely responsible for shutting down Connor McDavid in the O final. https://t.co/7RuLVAZA2c

I would have assumed after Guy Boucher’s tenure here that Pierre Dorion would be more well-guarded in using his coach’s input to drive his player personnel decisions, but at the very least, Brown should offer a stylistic change to the offensive, puck-moving defencemen that the Senators have stockpiled on the left side.

Was it worth trading a fourth-round pick for a replacement level player however?

Considering that the Senators moved Dylan DeMelo for a mid-third to spend an early fourth-round pick to fill his spot, it probably would have been better for the organization to simply re-sign the better player in DeMelo.

Obviously DeMelo is going to be a more expensive option, but not only has he proven that he can play up in the lineup and make the players around him better, but he actually had good chemistry and on-ice results playing with Thomas Chabot. And the Senators will still need some outside help to reach the cap floor next season, retaining DeMelo would have helped the organization surpass that financial benchmark.

If Brown is going to be a fixture on the team’s third pairing, that essentially puts the coaching staff in a spot where they are forced to use Nikita Zaitsev or Artyom Zub as Chabot’s partner. Perhaps Zub will prove himself to be a better puck-moving defenceman than Zaitsev, but it would be difficult having to endure another season in which Zaitsev acts as an anchor and helps drag Chabot’s numbers.

Pucks and plays die on Zaitsev’s stick and eventually, the Senators are going to need a reliable partner for Chabot if this team is going to improve take a marked step forward.