Your Morning Dump... Where the 2021 season started on Sunday 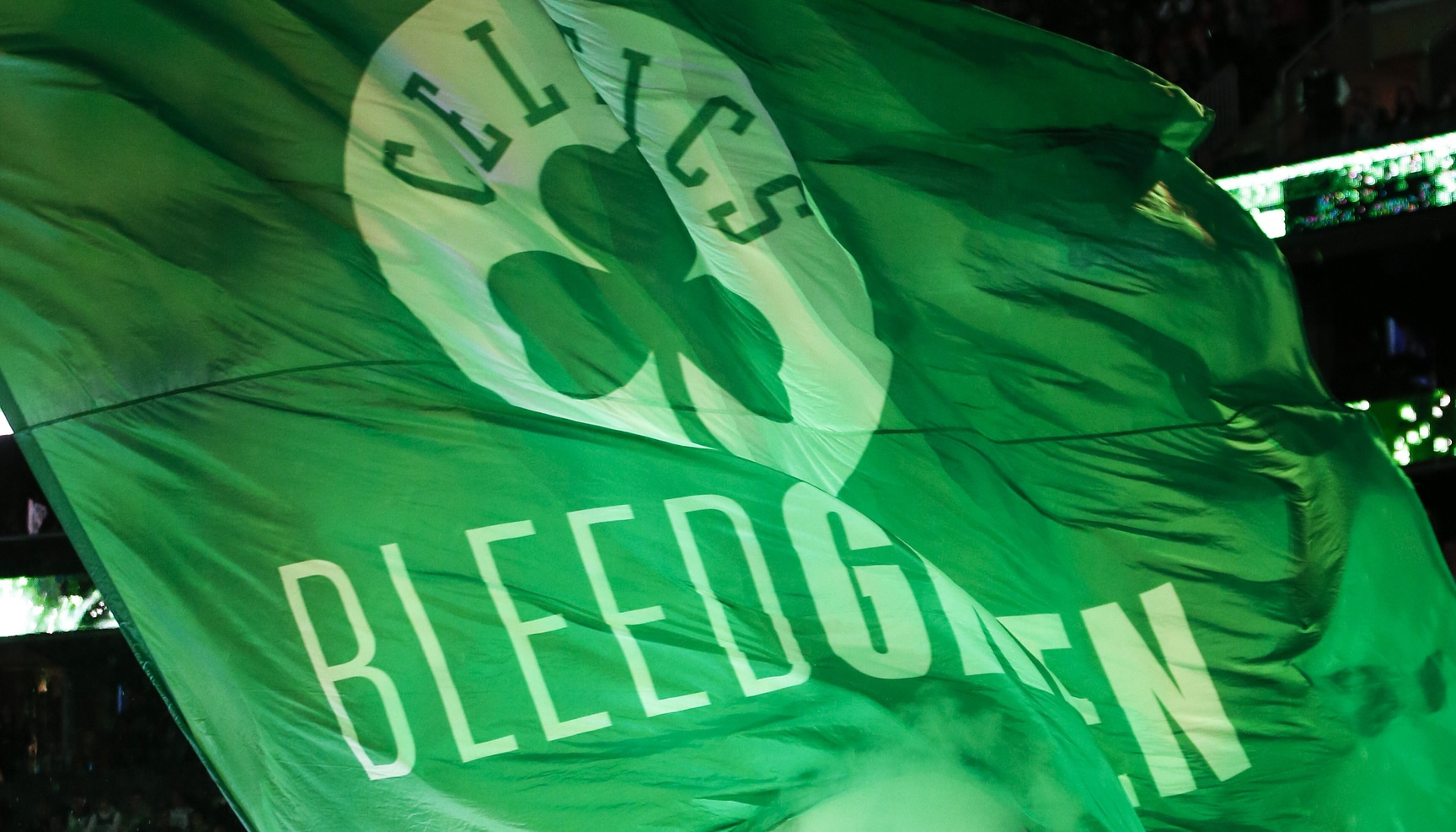 Your Morning Dump... Where the 2021 season started on Sunday

First off, because, unfortunately, I expect this is going to become a thing, here is your reminder that there was indeed a time when the Los Angeles Lakers disavowed any relationship with the Minneapolis Lakers: 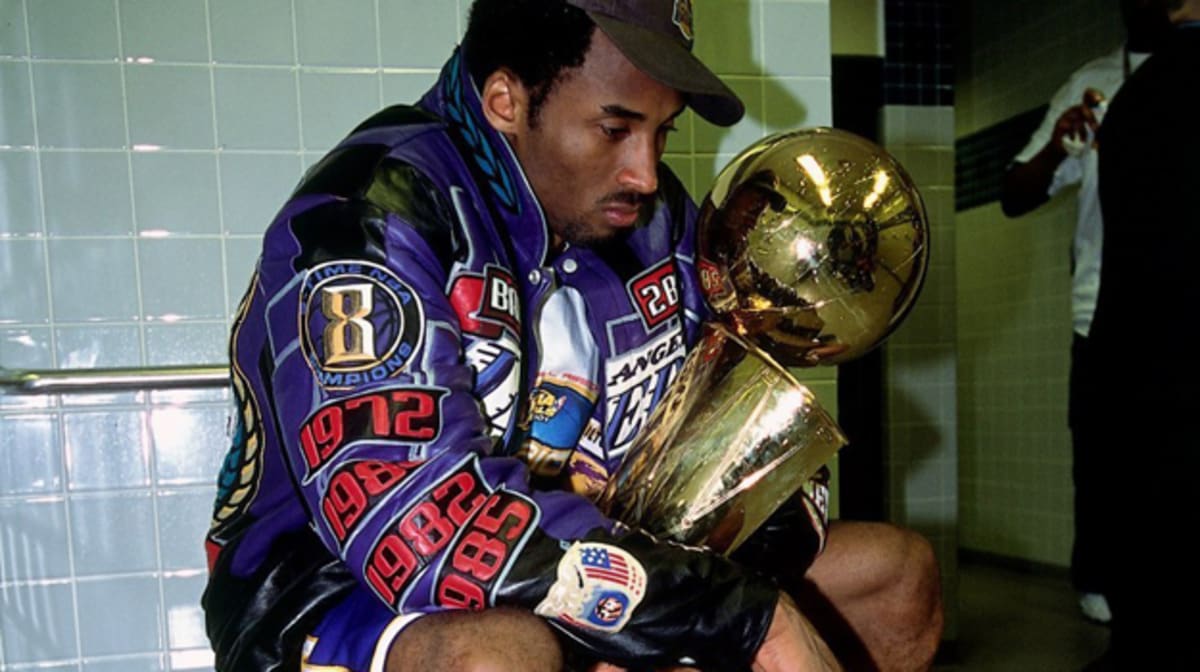 And even today, they treat their five Minneapolis titles like red-headed stepchildren at the Staples Center: 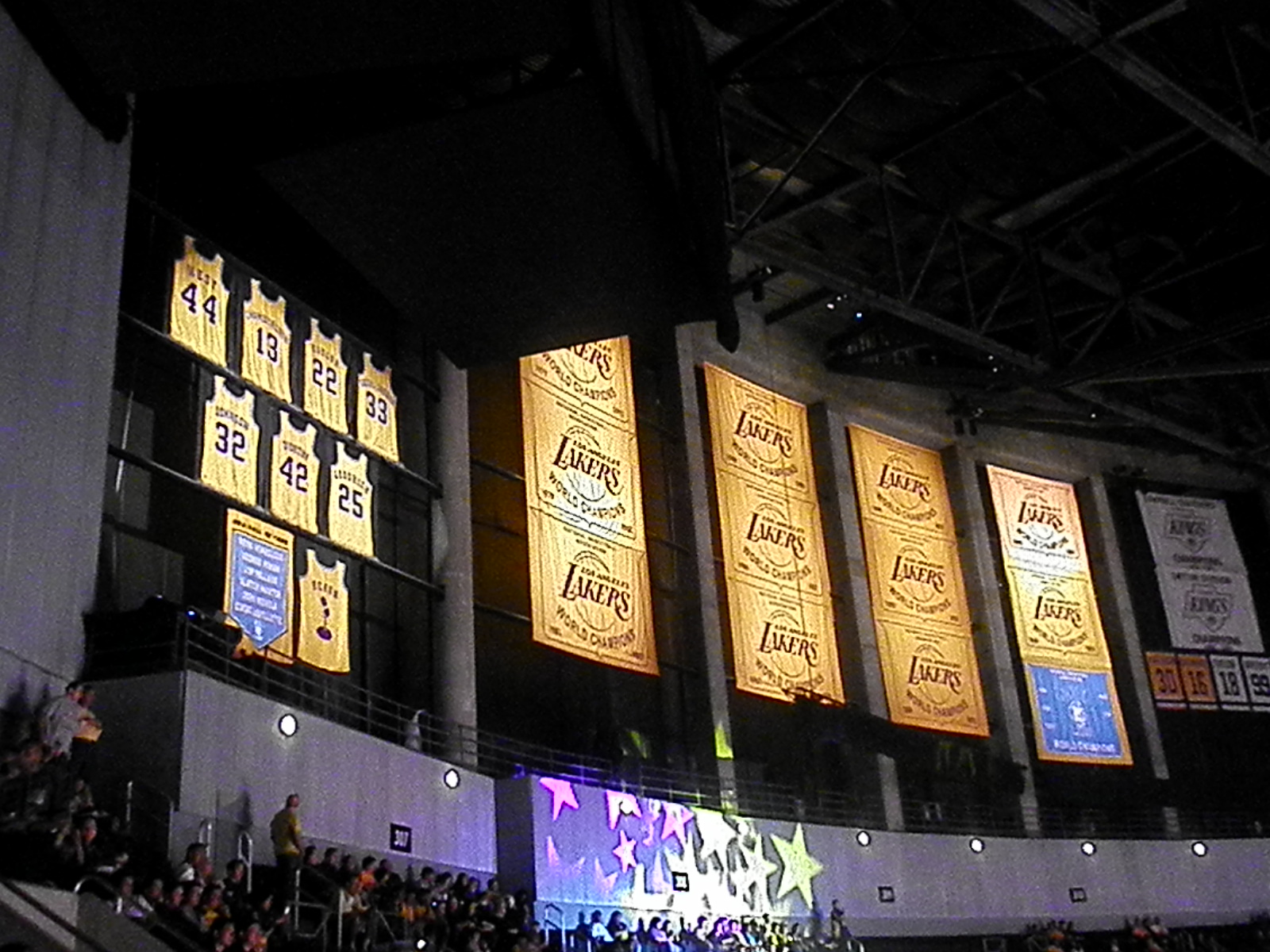 The first five championships are clearly and obviously treated differently by the Lakers. They’re jammed together on a single light blue banner that wasn’t even added to their collection until they moved to the Staples Center.

Nope. There aren’t any. George Mikan is the reason why the “Key” doesn’t look like a key anymore. The free-throw lane used to be the width of the backboard. It was expanded to ten feet in order to mitigate the effectiveness of Mikan (fun fact: All the changes to the ‘key’ are due to guys who at one time or another played for the Lakers–Chamberlain is the reason why the key in the pros is wider than it is in college, and Shaq is largely responsible for the addition of the charge circle).

But if you want to wear 99 for the Lakers, it’s there for the taking.

Mikan was the dominant player in the 1950s. That his number isn’t retired is to me, beyond anything else that the Lakers have done, evidence that they themselves consider those five titles to be discountable, not worth as much as the 11 they’ve won since. Not to mention that Jim Pollard and Vern Mikkelsen who played their entire careers with Minneapolis, winning five championships, and subsequent election to the Hall of Fame, are given short shrift just like Mikan. The contributions of all three are acknowledged in a light blue banner that relegates them to second-class status to match the second-class status accorded the titles they won.

Okay. Now that I’ve gotten that out of the way, it’s time to talk about the future.

But two things are certain: There’s not much any of us can do about what’s going on in Orlando, and the only way the Celtics can put some distance between themselves and the Lakers is by winning championships in the future.

So let’s talk about that. Because I really really don’t want to talk about how the Lakers seem poised to do to the Heat what Boston could have and should have done to them.

The most promising prospect — or at least, the best-known quantity — might be Grant Williams, who played 1,043 minutes this season. After an abysmal start from 3-point range and early struggles to switch against ball-handlers, Williams put in a ton of work and morphed himself into a small-ball five prospect whose floor is comfortably high.

Langford, meanwhile, struggled to break into the rotation after early injury issues limited his minutes. Langford played in just 32 games, 370 minutes total. In those minutes, he showed promise as a defender — an intriguing development given that his best skills as a prospect were slashing and scoring off the dribble.

I know Chuck said yesterday that he expects Langford to join Hayward and Walker on the list of ‘perpetually injured’, and honestly, I think that might be unduly pessimistic. He’s had a ton of work done on his right thumb and wrist, and he might need to be given close attention to make sure that he follows through on the PT required to rebuild strength in that area, but the other injuries he’s had are fluky things.

I’ve said before that the best comp for Langford in Celtics history might be Reggie Lewis. Both of them saw their draft stock tank because they performed poorly when, by all rights, they shouldn’t have been performing at all.

Langford played through a wrist injury his freshman year while Lewis went to the draft combine when he had the flu and while working out there he looked like he had the flu.

Both guys joined teams that were already stacked–Lewis more so than Langford.

Grant Williams basically forced his way into the rotation with his defense. I fully expect him to take a leap next year and I also expect his three point shooting to improve in time. Looking at Marcus Smart’s shot chart from his second year with the Celtics, when his three-point shooting percentage was 25.3%, roughly equal to Grant’s, but on way more attempts, and comparing it to a shot chart from last season (the latest available at Austin Clemens’ website): 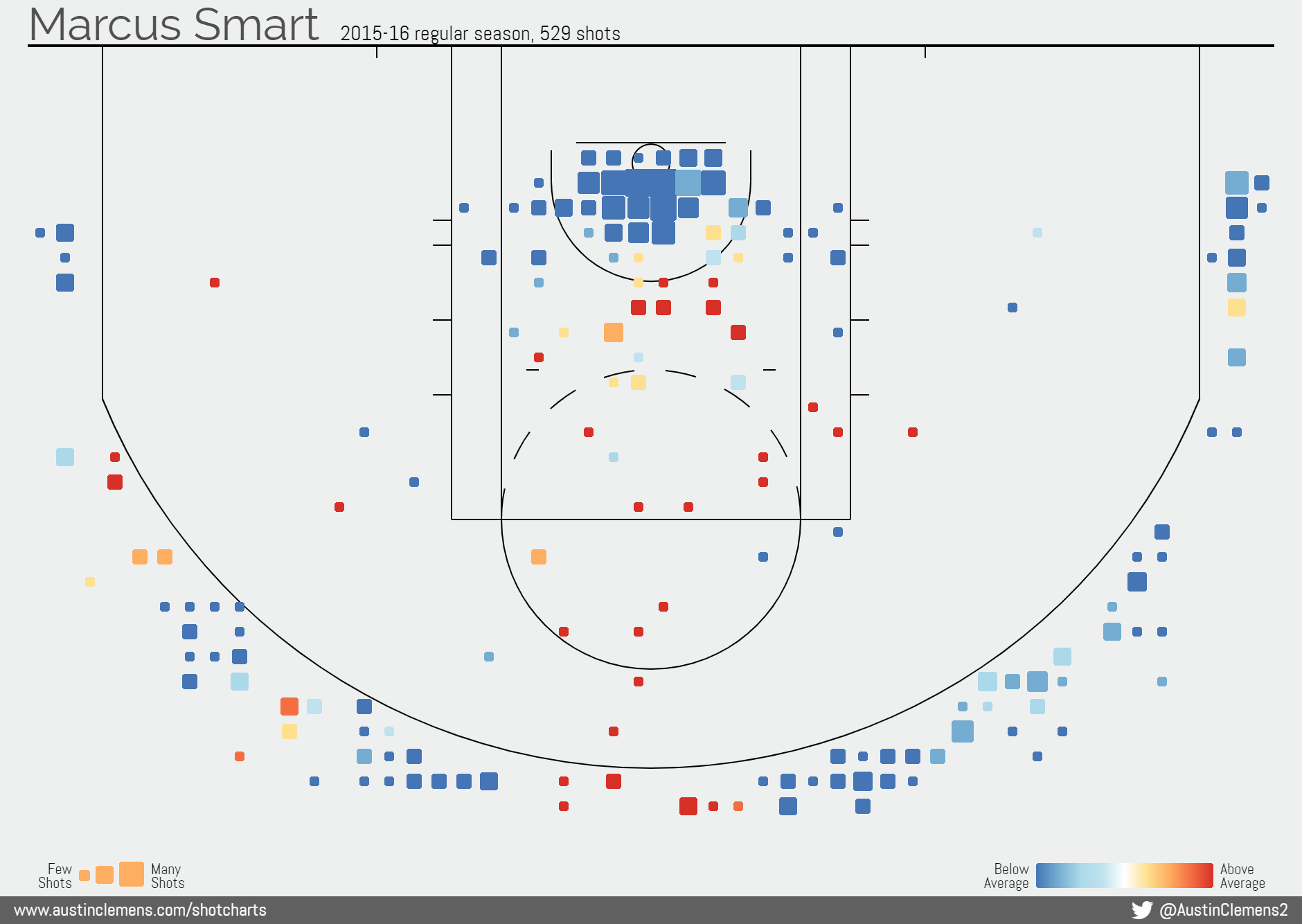 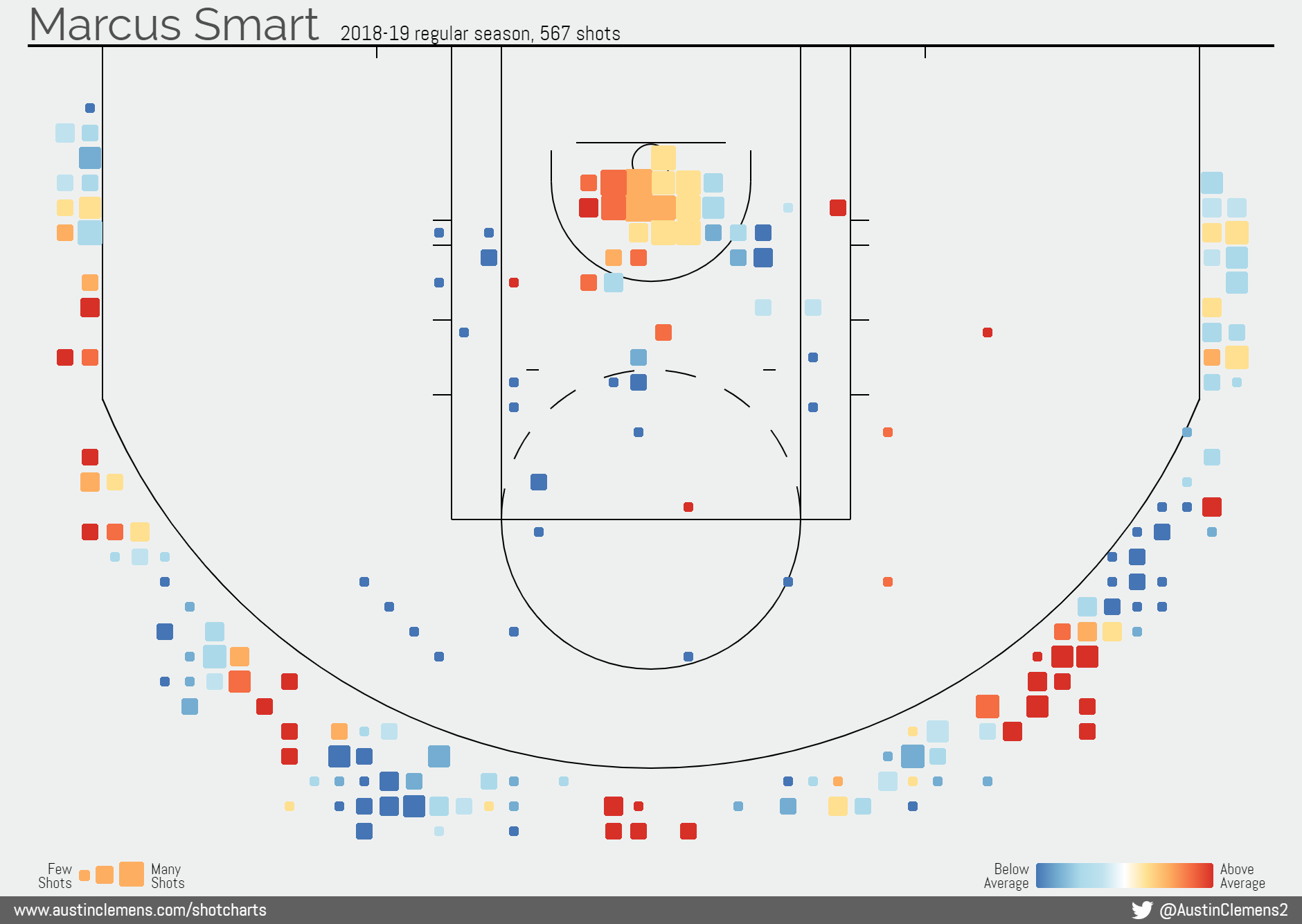 Basically, Marcus found his ‘hot spots’: Notice that in the 2018/19 graph (bottom), on the right elbow, the orange and red squares are significantly larger than the blue squares that are immediately adjacent? Smart took more three point shots from a spot where he shot a higher percentage (it’s also worth noting that Smart still has some room for improvement, as his shots on the left elbow don’t reflect this adjustment).

I believe Grant Williams can make a similar improvement by following a similar strategy: If there’s one spot where he can knock down threes all day during a game, he needs to make sure he’s in that spot when he takes the shot–it won’t do to be a few feet either way.

Anyway, Langford and Williams are examples of why all of us should expect better things from the Celtics next season and beyond.

I absolutely hate the way this season ended, but it would be wise not to predict the future clutch performance of these young guys based on their flameout in the conference finals.

In 1978, Dennis Johnson missed every shot he took in the seventh game of the Finals. He was the Finals MVP one year later.

On the court, he thrust himself into the All-Star conversation. He was the team’s second-leading playoffs scorer and his 58.6% true shooting was the most efficient mark amongst the team’s starters.

“I’ve said this a few times about Jaylen. He’s an impressive young man and how his game has developed from the time I met him,” Boston Celtics President of Basketball Operations Danny Ainge said in a Thursday morning meeting with the media. “I’m not surprised, nobody would be surprised that he’s become a voice of our locker room and a voice of our organization. He’s in meetings with our owners, (Director of Player Development) Alison Feaster and (Vice President of Community Engagement) Dave Hoffman organizing plans for social justice. He is special and I knew that from the first time I met him.”

In my end-of-season rant, I said that Marcus Smart was the only guy on the Celtics’ roster who definitely hates losing more than he loves winning. Jury’s still out on everyone else.

But if pressed to come up with another player with a similar mentality, I’d have to go with Jaylen. Between the two Jays, I think losing bothers Jaylen more than it bothers Jayson.

Yes, Jaylen went to Cal instead of going to a university where he had a legitimate chance at winning an NCAA title, but he had his reasons for doing this. As a pro, I think the sour end to this season will motivate him in the same way that the sour end to last season motivated him to come back even better.

Page 2: Where Doc’s back in the East

Doc Rivers is heading back east, and back into the Atlantic Division after agreeing to become the new head coach of the Philadelphia 76ers, according to ESPN’s Adrian Wojnarowski.

It was reported yesterday that Rivers and the Sixers were meeting to discuss their coaching vacancy.

According to ESPN, the Sixers coaching search had been focusing on former Houston Rockets coach Mike D’Antoni.

Part of the allure for Rivers is the pairing of the franchise’s two young All-Stars in Joel Embiid and Ben Simmons. The Sixers have made it clear that they will keep the pair together rather than trade one or the other.

“I’m not looking to trade Ben or Joel. I’m trying to compliment them,” Sixers GM Elton Brand said at the time. “They’re 24 and 26 and want to be here. You try to make that fit as long as possible.”

Well, this is going to be interesting.

First of all, that the Sixers were apparently interested in Mike D’Antoni has me chuckling. I can’t think of a coach from the NBA’s treadmill less suited to Philly’s roster.

But, I’ll be honest, Doc Rivers is not far behind.

Doc doesn’t like coaching young guys, he has a terrible track record developing talent, and he’s agreed to coach a team with two cornerstone players who have put in minimal effort improving their games over the course of their careers.

Have fun trying to get Ben Simmons to work on his jumper, Doc.