I know I started this season saying I wanted to be more optimistic, but the C/-/ARGERS are making it really fucking tough right now.  Last week was a bad loss and the team has only gotten worse via injury since then.  The crazy thing about the Carolina game was that the Chargers could have been down by way more than they were.  They held the Panthers to a bunch of field goals and could have easily been getting blown out.  Once again, they got no turnovers and gave the ball away multiple times.  Yes, the Herbert fumble looked to be an incomplete pass.  As far as I understand, the play was reviewed automatically by the officials.  The OPI on Mike WIlliams was also a bad call, especially since Herbert threw a pick right after it and Williams got hurt for tomorrow’s game and beyond.  The Kelley fumble was especially maddening since it was at the end of a great run and we appeared to be in a good position to score after it. 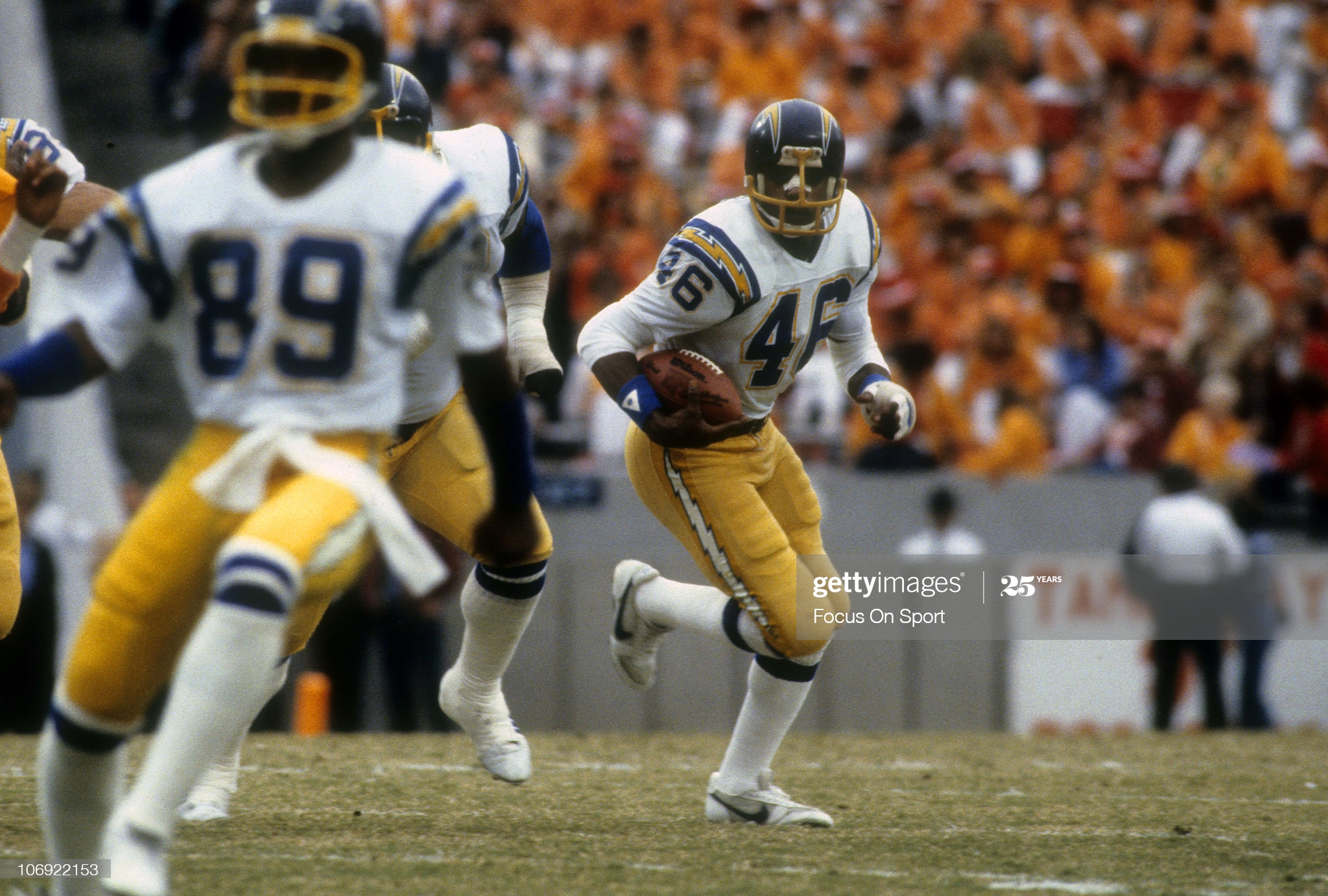 TAMPA, FL – DECEMBER 13: Chuck Muncie #46 of the San Diego Chargers carries the ball against the Tampa Bay Buccaneers during an NFL football game at Tampa Stadium December 13, 1981 in Tampa, Florida. Muncie played for the Chargers from 1980-84. (Photo by Focus on Sport/Getty Images)

I know every team’s fan base thinks their coaches aren’t aggressive enough.  We all expect everyone to go on 4th and short every time and hate when it appears that they are passive on defense.  While I don’t pay for a subscription to The Athletic to get Daniel Popper’s insight, I know he has said there is a less than one percent chance Lynn is fired.  In fact, he has also said that Telesco has a better shot of being axed.  I know I have ranted and raved about Telesco since his secret extension, but his draft picks have been good of late and I’m not yet ready to declare Mike Williams a bust.  Look, he’s responsible for two of the biggest catches in recent team history in KC in 2018.  I can’t believe no one has asked Lynn why he went for 2 in that game but punted against the Chiefs this year.  I also question why he seems to keep Badgley on the sideline for every kick over 50.  I know he missed one in the opener and doesn’t have the leg for kickoffs.  But Lynn has twice punted instead of letting him kick one.  I am still waiting for someone to ask him about the end of the first half last week.

I think we can cut Lynn some slack over the Tyrod Taylor comments now that we know the whole story.  He did attempt to “walk them back” afterwards.  I don’t know if PR talked to him.  I don’t mind the whole “gamesmanship” aspect of not giving advance notice on injuries, but when you don’t have the track record to back it up you look like an idiot.  I seriously wonder whether Turner or Balaga will play at all at this point.  The depleted line looked like shit last week and Herbert was getting knocked around.  For one play, it seemed like he was knocked out.  We then took a time out to avoid putting Stick in and could have used it in the end.  Like the challenge he used in the first half, it seemed like a waste.  Lynn does not appear to evolving in his in game decision making which was also a weakness of our last three coaches.  People forget that Marty lost 2 home playoff games that way with a 12 and 14 win team, but I know you don’t, FAITHFUL READER. 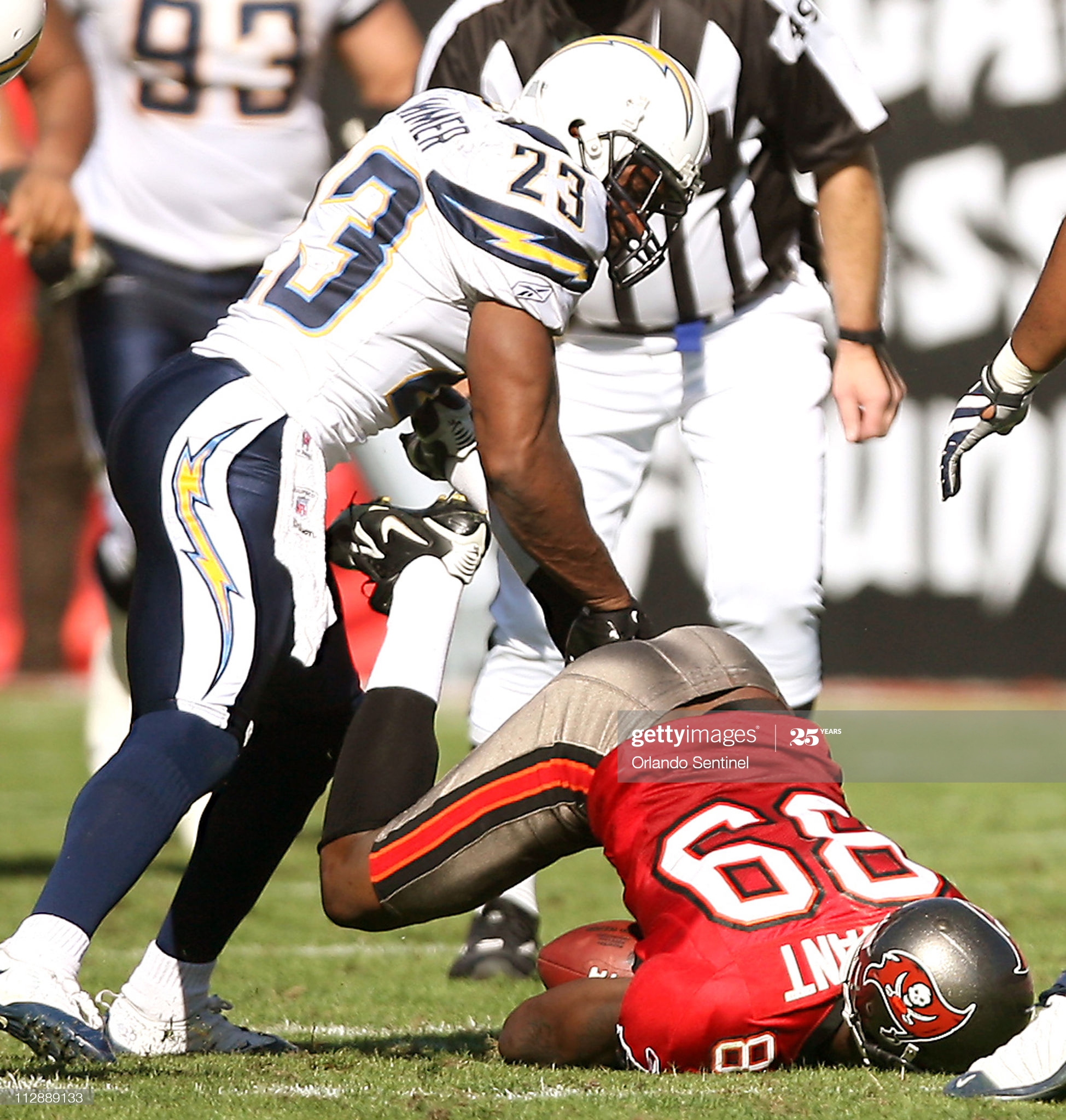 Like our other free agent acquisitions, I was starting to wonder whether Chris Harris was maybe on the street for a reason.  Now he’s hurt.  At least it allows Desmond King to play even though it also means Addae moves up on the depth chart.  I hate his big fumbles on kick returns but Lynn’s issues with King are stupid.  Lynn took responsibility for the loss last week, but his judgement is still really suspect.  Our record in one-score games speaks for itself. 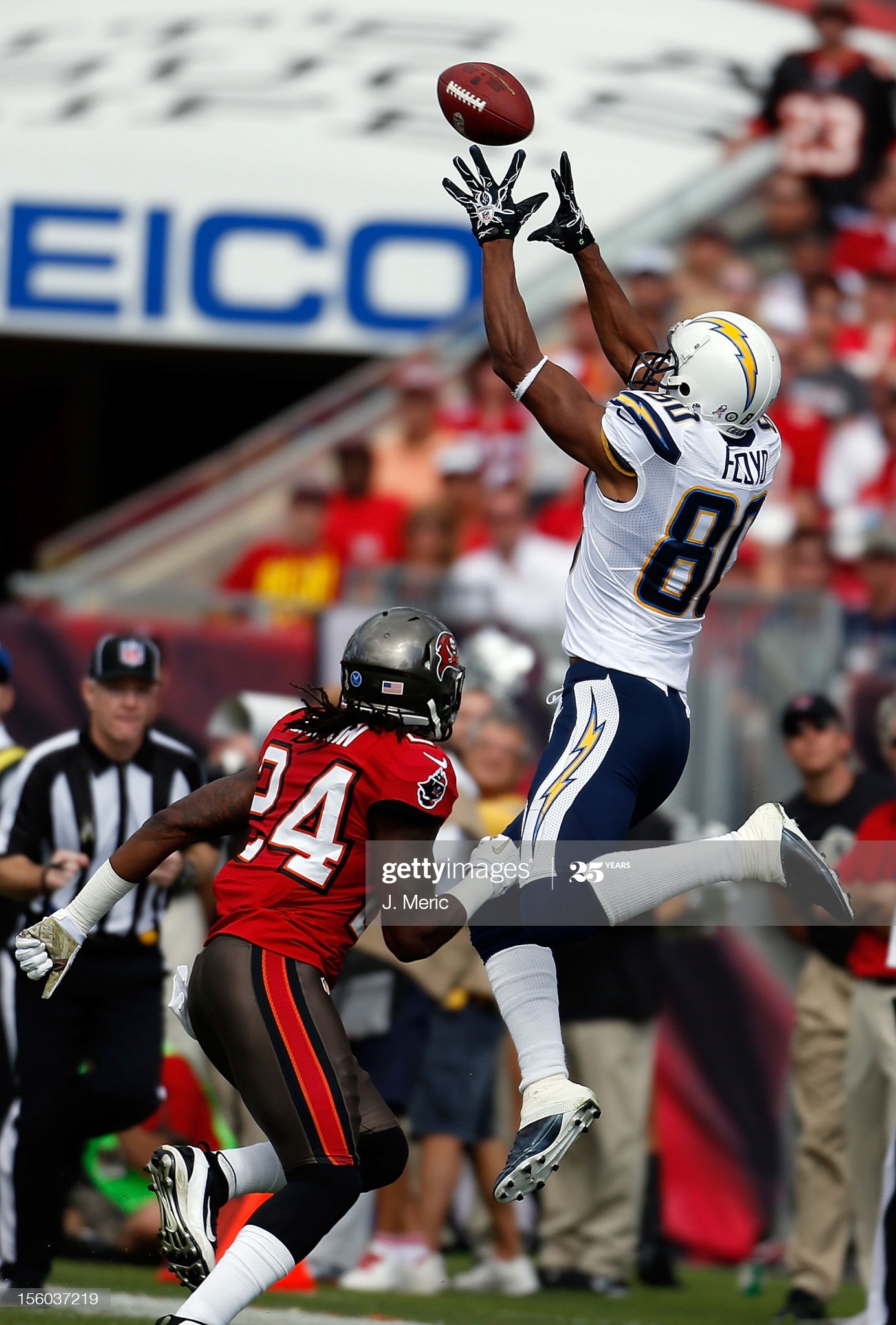 TAMPA, FL – NOVEMBER 11: Receiver Malcom Floyd #80 of the San Diego Chargers catches a pass in front of safety Mark Barron #24 of the Tampa Bay Buccaneers during the game at Raymond James Stadium on November 11, 2012 in Tampa, Florida. (Photo by J. Meric/Getty Images)

Of course, the pass rush was weakened by the absence of Ingram.  Bosa’s offsides penalties were a killer.  If Carolina can bait him into it at home, I can only imagine what Brady will do tomorrow in Tampa.  But Bosa is amazing, so I really can’t pick on him.  By the time Keenan Allen caught his TD, I really didn’t have much hope.  His drop on the conversion ended up being huge.  I feel lucky that I couldn’t see how close we were to pulling out the hook and ladder  It’s just more salt in the wound.

I know I said last week was a must win, but now this week is really one.  KC is running away with the division and us being close to beating them is even more maddening after losing to the fucking Panthers.  The Chargers aren’t coming back from 1-3.  Tampa has looked good as of late and the injuries on our offensive line are really troubling.  Tampa has a good pass rush, but at least Herbert hasn’t lost confidence.  I was at the last game we beat Tom Brady in.  You might remember, it was a 41-17 blowout in Foxboro.  Afterwards, Marty tried to be diplomatic and say the Pats weren’t the same team that won the Super Bowl the year before.  Brady got all pissy and told him not to comment on his team.  The Pats lost at Denver that year and we didn’t even make the playoffs.  The game against the Dolphins was the final nail in the coffin and I was also there.  That was the last Charger home game I attended.  I also saw the Washington game that season where LT scored in overtime.

What does any of that have to do with tomorrow’s game?  Absolutely nothing, say it again.  Brady can be had, but do we have the pass rush to do it?  This game reminds me a lot of the Browns game in 2018, but not because of the opponent.  It’s more about the hole they’ve dug themselves in thus far.  That season, they lost two home games against KC and the Rams and went to Cleveland and then London.  They needed a change of scenery and bonded together for a huge win.  But do we have the guys to do it, not to mention the coach?  I know Justin Jackson is allegedly going to be involved in the game plan, but I’ll believe it when I see it.  Without Mike Williams, Keenan Allen and Hunter Henry will be targeted a ton.  What we’ve seen of Herbert thus far leads me to believe he can get his first win.  I know it isn’t all about him, but wins are what counts.  Once again, it will be all about the trenches.  It’s hard to picture us having success with the scrap heap guys we have.  I don’t feel any more confident that Fucking Groy had a full week of practice with the starters.  This team needs to treat Brady like they have no respect for him.  Somehow, they need to play hungrier and smarter than they have.  If this season is going to be anything more than a rebuilding year, they will.  If they lose, Lynn can somehow put Taylor in and we can kid ourselves that we will somehow be healthier next season.e 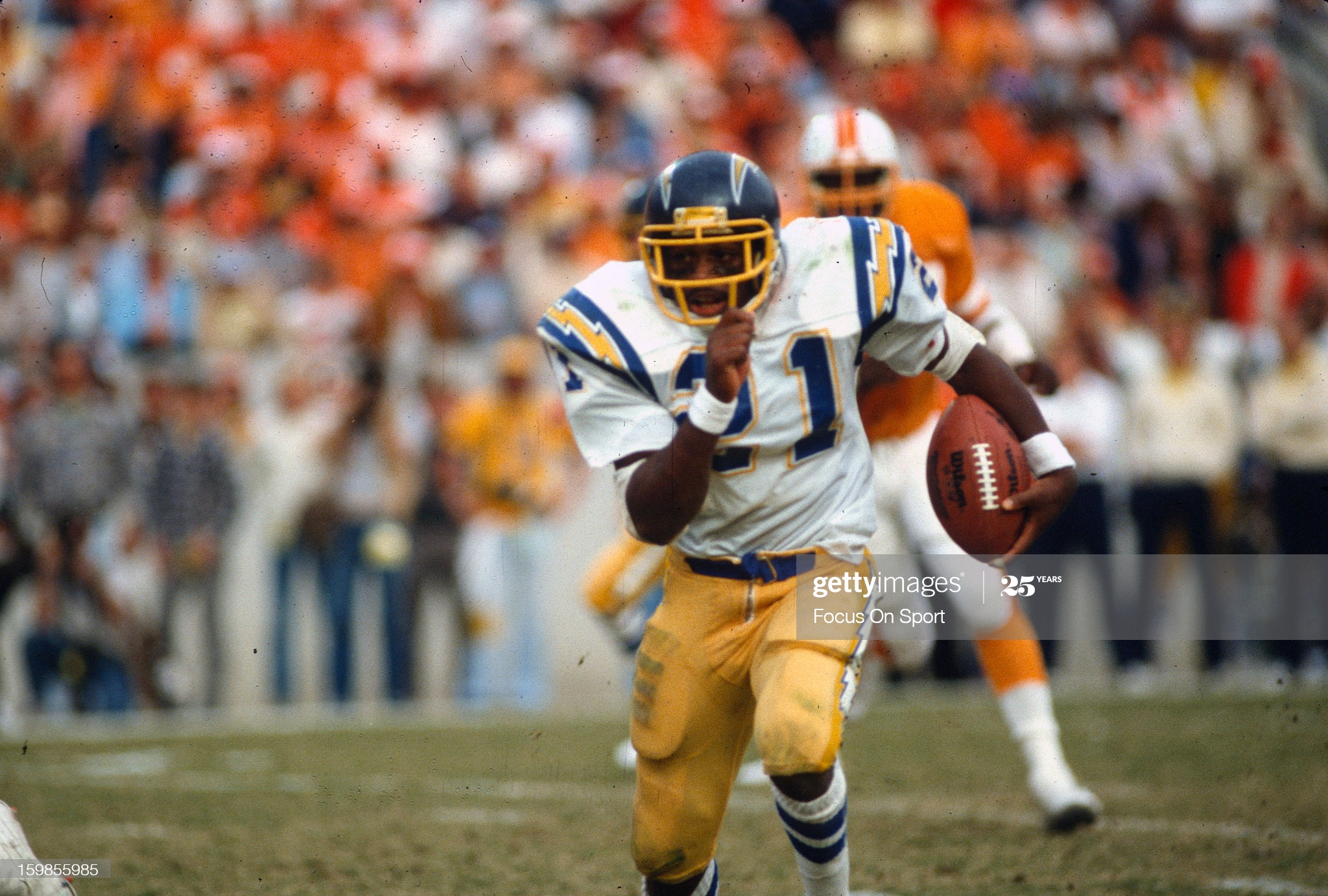 TAMPA BAY, FL – DECEMBER 13: James Brooks #21 of the San Diego Chargers carries the ball against the Tampa Bay Buccaneers during an NFL football game December 13, 1981 at Tampa Stadium in Tampa Bay, Florida. Brooks played for the Chargers from 1981-83. (Photo by Focus on Sport/Getty Images)

The last time we were in Tampa, Rivers threw one of the worst picks of his career.  I won’t say it can’t be worse than that because we know it always can.  Nonetheless, I’ll be in front of the tv tomorrow just as I know you will.  The Chargers’ record in 1pm games has been pretty good of late.  It’s a full Bolt up or shut up situation.  The only way we win this game is if some of these guys that we’re afraid of playing step up in a big way.  That’s all for now. 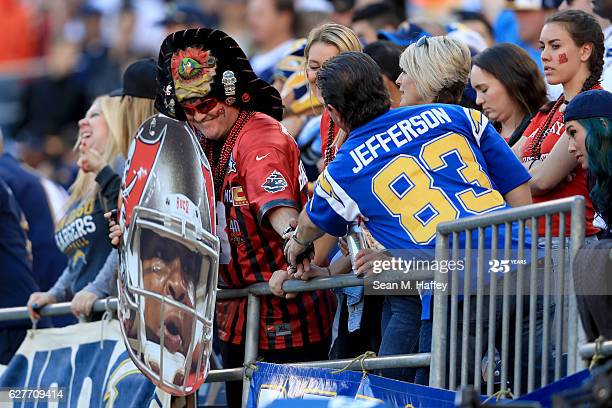