Good morning Edmonton! After weeks of speculation, the free agent market will open today at 12:00 pm eastern. The Oilers are expected to be active, with a goaltender and third line center at the top of their shopping list. The club will also look for help on defense, and there is a chance the Oilers add a winger at some point in the next little while.

Yeah, there is a lot happening.

Here is what we do know ahead of free agency.

The Oilers are in the market for a veteran starting goaltender. If Jacob Markstrom hits the market, which it appears he will, the Oilers are the favorite to sign him. Look for a seven year contract with an AAV of around $5 million. The team has also shown some interest in Braden Holtby.

The addition of a veteran starter could open the door to a Mikko Koskinen trade. The Minnesota Wild are a sneaky team to watch here as they look for a veteran goalie.

On defense, the idea is for Edmonton to pitch Tyson Barrie on a one-year ‘prove it’ deal. If that doesn’t work, Travis Hamonic and Radko Gudas are two free agents to keep an eye on. I think the Oilers would also like to get back into the Oliver Ekman-Larsson conversation, but OEL has not budged on his no-trade clause stance.

Up front, the Oilers do have interest in Taylor Hall and I expect them to pitch him on a short-term contract. Odds of a return? Less than 40% in my eyes. The Oilers have other needs and my expectation is that Hall wants to join a ready-made contender. Colorado seems like a logical fit.

At center, Mikko Koivu and Erik Haula will be two free agents centers I expect the Oilers to show some kind of interest in. If Dominik Kahun reaches the market, expect Leon Draisaitl to vouch for his friend again.

On the trade front, keep an eye on the Boston Bruins. The Oilers and Bruins have had multiple discussions leading back over a month. The Oilers still have interest in an Alex Chiasson for Anders Bjork deal. I also believe the club is dangling veterans Kris Russell and Zack Kassian as they do their due diligence.

Here’s a look at GM Ken Holland’s shopping list form back in August as we open free agency.

1. Find a tandem goalie: Holland is now apparently aiming higher and looking for a starter. If he strikes out on Markstrom and Holtby, he’ll probably fall back and sign a tandem option like Thomas Greiss or Aaron Dell.

It’s possible the Oilers move veteran D Adam Larsson for a third line center, but Holland has hinted that he will go the free agent route. The club has interest in Koivu and Haula, while Kyle Turris is an interesting option. Alexander Wennberg and Nick Cousins are also late additions to the market.

The Oilers like Cousins at the deadline before opting to trade for Andreas Athanasiou.

5. Add Defensive Help: This wasn’t on the August 24th list, but with Oscar Klefbom’s injury issues it has become an area of need. Think short term here, like Hamonic, Gudas and Barrie.

1:25 pm est: The Oilers have made two signings early today. The first is veteran center Kyle Turris, who has signed a two-year deal worth $1.65 million per. A right-shot center with offensive ability, Turris is a good buy low candidate for Edmonton’s third line center opening. With a moderate AAV, the Oilers should have some playing around money for other holes. Personally, I like this bet.

Edmonton has also signed depth forward Alan Quine to a one-year contract worth $750,000. Quine is a strong AHL’er who could compete with Gaetan Haas for the team’s fourth line center job. Quine also adds a level of grit to the depth forwards.

Meanwhile, things have changed in net. Jacob Markstrom will NOT be signing in Edmonton as of this time. Calgary is the favorite. Braden Holtby, another target, has signed a two-year deal in Vancouver.

2:10 pm est: The Oilers have signed a goalie! It’s veteran Anton Forsberg, who signs a one-year contract with the club. Forsberg is expected to serve as the team’s number 3 goaltender and likely shares the net with Stuart Skinner in Bakersfield.

The team is still searching for an NHL option in net to pair with Mikko Koskinen now that Jacob Markstrom has signed with the Flames.

Meanwhile, the team has also signed AHL forward Seth Griffith to a two-year, two-way contract. Griffith will play a top-six role in Bakersfield and provide the farm team with an impact forward. He’s also a cheap candidate for NHL minutes in a pinch. He brings both speed and skill to the table.

3:48 pm est: The Oilers are bringing back one of their own free agents. The Oilers re-signed forward Tyler Ennis to a one-year contract worth $1,000,000. The deal gives the Oilers a solid middle-six winger at a very affordable dollar amount. Ennis, who will be ready for opening night in January, has been working out and spent time with Connor McDavid this offseason.

Ennis scored 16 goals in 70 total games last season, finishing the season with 37 points (16 g, 21 a) split between Edmonton and Ottawa. The local product had four points (2 g, 2 a) in nine regular season games with the Oilers, and added two points (1 g, 1 a) in three playoff games in August.

Ennis and Kyle Turris, signed earlier today, will provide the Oilers with some solid middle-six depth at a cap charge of just $2,650,000 next season. Give Holland credit here, this is some good value.

Meanwhile, former Oiler Matt Benning has signed a two-year deal with an AAV of $1,000,000 with the Nashville Predators. Benning did not receive a qualifying offer earlier this week.

The Oilers remain on the hunt for an NHL goalie. Anton Forsberg, signed this afternoon, will be starting the season in the AHL. The Oilers have checked in with veteran Thomas Greiss, according to sources. The Oilers also have shown some interest in veteran Corey Crawford. The Colorado Avalanche are also in the market for Crawford.

Greiss has also drawn interest from the New Jersey Devils, according to a source.

There was some smoke that the Oilers were close on Mike Hoffman this afternoon. Don’t count on it, per a source. At least right now, Hoffman doesn’t seem to be on the club’s radar. That could change if the price comes down.

I don’t think the Oilers are done by any means. The club needs a goalie and is in search of help on defense. I believe they are still in on both Tyson Barrie and Travis Hamonic. 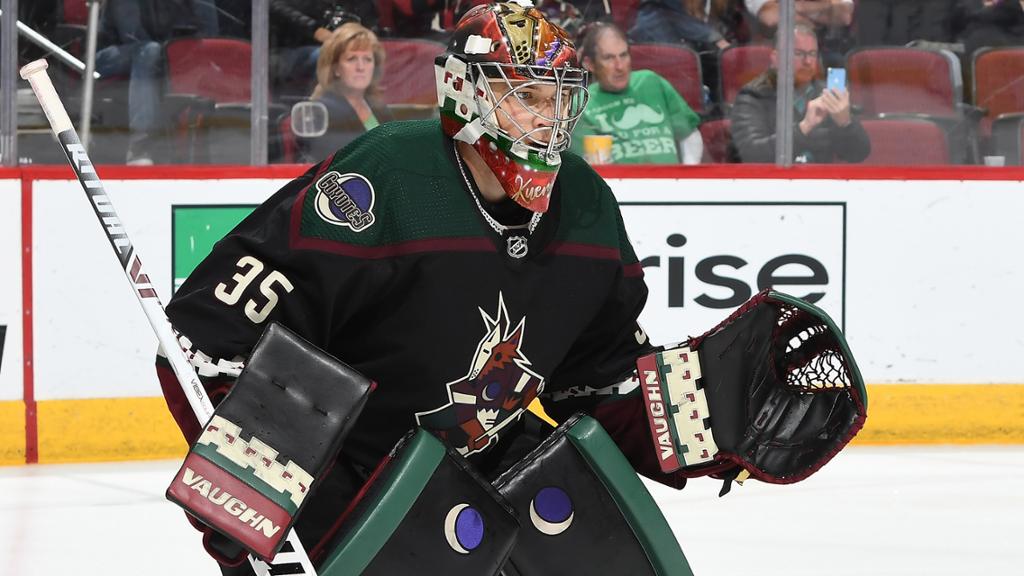 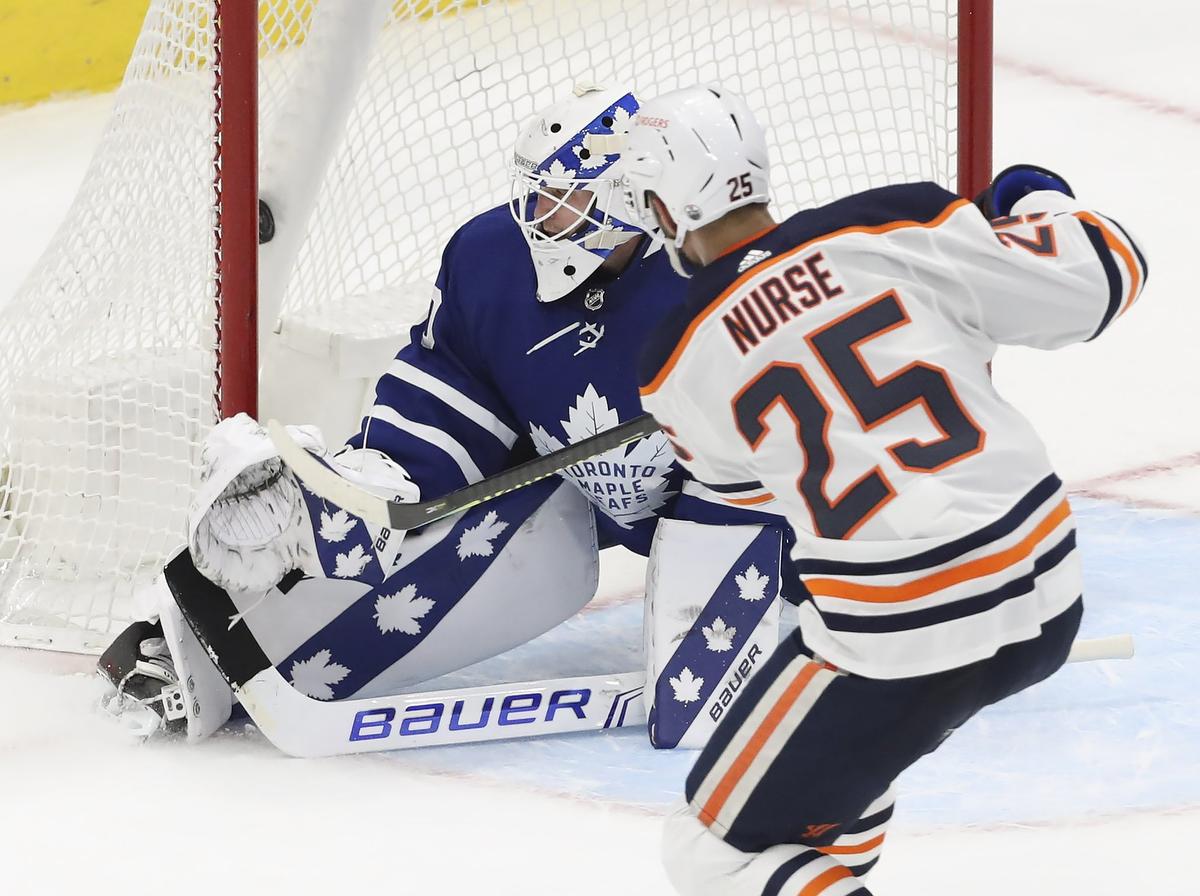