When the NHL’s free agent formally opened at noon today, any expectations for the Ottawa Senators to splurge on talent were incredibly unrealistic.

Thanks to the pandemic creating a loss of gate revenue which was already negatively impacted by the fact that Ottawa’s revenue stream was down thanks to the team’s lowest average attendance figure since the 1995-96 season, ownership was hit hard in the pocketbook.

Having already cut the salary of the hockey ops department and coaching staff by half earlier in the year, it would probably be a little naive to assume that the purse-strings would be loosened so the team could spend freely in free agency.

No one should be blaming fans for hoping for it.

Despite possessing approximately $40 million in cap space and holding one of the most coveted cap situations in the league, the Senators have held their cards close to their vest when it comes to their internal budget for the 2020-21 season.

Aside from the shameless promotion and promises from ownership that the team would spend to the upper reaches of the cap ceiling beginning in 2021, there is no transparency in regards to the payroll limitations ownership has imposed on general manager Pierre Dorion.

What is known however is that the NHL’s cap floor for the 2020-21 season is $60.2 million, so the Senators will have to eclipse that mark in cap dollars — whether they surpass that total in real money remains to be seen.

The biggest piece of Pierre Dorion’s work today however, came in the form of a contract extension for the newly acquired Matt Murray.

Murray agreed to a four-year extension carrying an average annual value (AAV) of $6.25 million – a figure more expensive than I anticipated it being.

Using Evolving-Hockey.com‘s goaltending data, Murray allowed 13.98 more goals than he should have using their goals saved above expected metric (GSAx). It was the sixth-worst rating in the league and only Marc-Andre Fleury, Alex Stalock, Pekka Rinne, Jimmy Howard and Devan Dubnyk were worse.

As I discussed earlier in the week, Murray has let in more goals than expected over the past three seasons. But, having won two Stanley Cups in his first two years in the league, this inevitably will be the high-water mark that the organization will allude to when projecting Murray’s performance going forward.

The fact that Murray only had a year of team control left before being eligible for unrestricted free agency probably helped create a bit of leverage, especially since the Senators don’t exactly have a sterling reputation of late.

At just 26 years of age, there is still plenty of opportunity for him to turn his game around and hopefully a change of scenery will be the mechanism that helps Murray reestablish his game and become the number one starter that Ottawa needs.

The interesting wrinkle to Murray’s contract is that is backloaded in real dollars.

If the Senators are intent on spending to the cap ceiling in the near future, one would assume it would have been in the team’s best interests to frontload the deal while the team is rebuilding and create more flexibility and opportunity for creativeness down the road when the team should be positioned closer to success. Unfortunately, it’s probably a reflection of how the pandemic has affected the Senators’ revenue streams.

Having Murray under contract for four years will inevitably afford the Senators more time to bring along their goaltending prospects and with none of them safely projecting as an NHL number one, allowing these prospects to develop at their own pace instead of being rushed along should only benefit the Senators over the long haul.

The risk is that if Murray’s game does not return to his 2016-17 level, the Senators will have given long-term contract to a goaltender at the time when the market is saturated this offseason and will assuredly be filled with tons of alternatives next summer.

Fans have earned the right to be skeptical of the organization’s promises to spend and should Murray’s struggles continue, the Senators will be left with a goaltender whose third and fourth years of his deal could hamstring the team’s internal budget at a time time when it should be more competitive.

I’ve written extensively about how next summer’s goaltending market should be saturated with options because teams are only allowed to protect one as part of the Seattle expansion draft process.

With so many options being available over the next short while, the likelihood of Ottawa being able to find a good goaltender for less than what they acquired Matt Murray for and the cost to extend him, the Senators may have been better off waiting — especially since the team isn’t expected to contend for a playoff spot.

After the relationship between Mark Borowiecki deteriorated enough to inspire the defenceman to explore the free agent market, it was only a matter of time before the Senators addressed the vacant role on the depth chart for the local guy who oozes character.

Yesterday the Senators dealt a 2021 fifth-round pick to the Anaheim Ducks for Erik Gudbranson, who quickly turned around and reallocated the cap savings on Gudbranson by signing free agent defenceman Kevin Shattenkirk.

Gudbranson is in the last year of a three-year contract that carries an average annual value of $4.0 million and costs the Senators $3.0 million in real dollars for the 2020-21 season.

Considering how the organization balked at taking Anthony Duclair to arbitration in the wake of the team’s stalled contract negotiations because they were concerned that they would be stuck with a short-term contract that would cost less than the $4.5 million threshold that the team would be permitted to walk away from, it is sort of ironic that the organization would willingly want to take on Gudbranson’s $3.0 million contract knowing that he is not particularly good.

Like the rest of the right defencemen that the Senators have added to their roster over the last two years, Gudbranson will join Nikita Zaitsev, Josh Brown and Artyom Zub as defensive defencemen who will never be recognized for their puck-moving skills.

Thanks to Jason Paul’s ‘Versus Player’ tool on Waveintel.org, it is easy to visualize just how much the Senators two highest-paid right defencemen struggled last season. 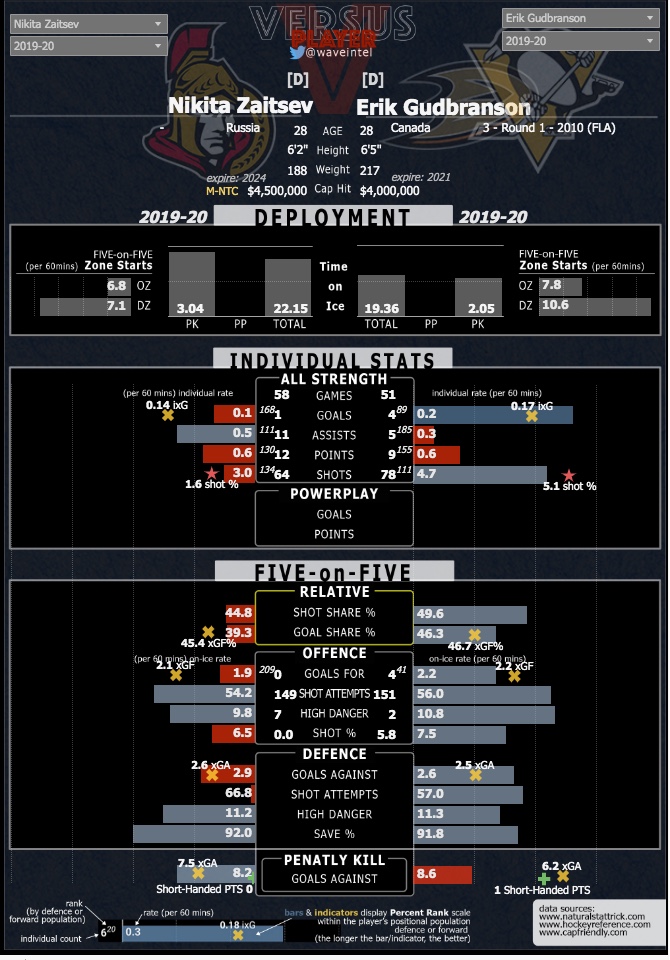 Make no mistake, the Senators added a ton of character here.

If you are unfamiliar with Gudbranson’s history or how his brother’s leukemia helped shape him into a mature person at such a young age, please read up on it.

Injecting a bilingual player who is from the area into the Senators’ young lineup will be a blessing for the media, the fans and hopefully his teammates, but once again, the issue comes back to cost and using the team’s scarcely limited dollars on a player who has struggled to develop into anything more than a replacement level player since being selected third overall in the 2010 NHL Draft.

According to Evolving-Hockey.com‘s ‘Wins Above Replacement’ (WAR) metric, the defenceman’s best season came in 2014-15 with the Florida Panthers when he was worth 0.3 wins in 76 games.

In four seasons he has registered a positive WAR ranging from 0.3 to 0.1. In each of his seven other seasons, Gudbranson was a sub-replacement level player.

The fifth-round pick is not much of an asset, but despite Gudbranson’s character, physicality and leadership, the Senators could and should have been able to find a replacement for a much less expensive cost.

Considering Gudbranson’s recent performance levels and contract, he’s the kind of talent that a team should have compensated the Ottawa Senators for in taking him off their hands.