Strange times, indeed, FAITHFUL READER.  It’s a cloudy Sunday here on Long Island and I’m sitting out on my deck with no football to watch today.  Given how the last three weeks have gone, that’s not a bad thing.  The Raiders just beat the Chiefs to remind us that “almost beating them” doesn’t mean shit.  I didn’t watch much, but I saw enough to see that they went deep on big downs and converted in big spots.  These were things the Chargers did not do.  When Mahomes threw one of his wrist flickers, they stepped up and picked it off.  I know that it would help for KC to lose, but is there anyone who thinks we have a shot at the division right now?  I can’t imagine the playoffs and if we’re going down, I’d prefer the Raiders to be down too.  But they’ve already shown that they don’t suck and right now I’m not so sure about the Chargers.  It only matters the two times we play them anyway.  Plus, we watched the Bears on Thursday similarly remind us of the killer instinct we are sorely lacking.  I know the injuries are ridiculous right now.  11 of 22 starters out is insane, even for the Chargers.  But when you lose this many close games, it’s a reflection on the coaching.  This is my opinion, but you didn’t come here for anything else I assume.  Tom Brady won’t throw 5 touchdowns in a game again.  I was at his first start in 2001 against us and I know what magic he can conjure.  What we saw on Sunday was pure Chargers garbage.  I know that we always turn on the DC for the late-game lapses, but I think Gus has to go.  Lynn tried to take the blame by saying he wasn’t putting the games in the right spots to make plays, but Bradley has now gone the route of Cottrell, Rivera, Pagano, etc…I have no confidence.  Even with all the injuries, these guys are constantly giving up tons of space and can’t get any pressure on the QB. 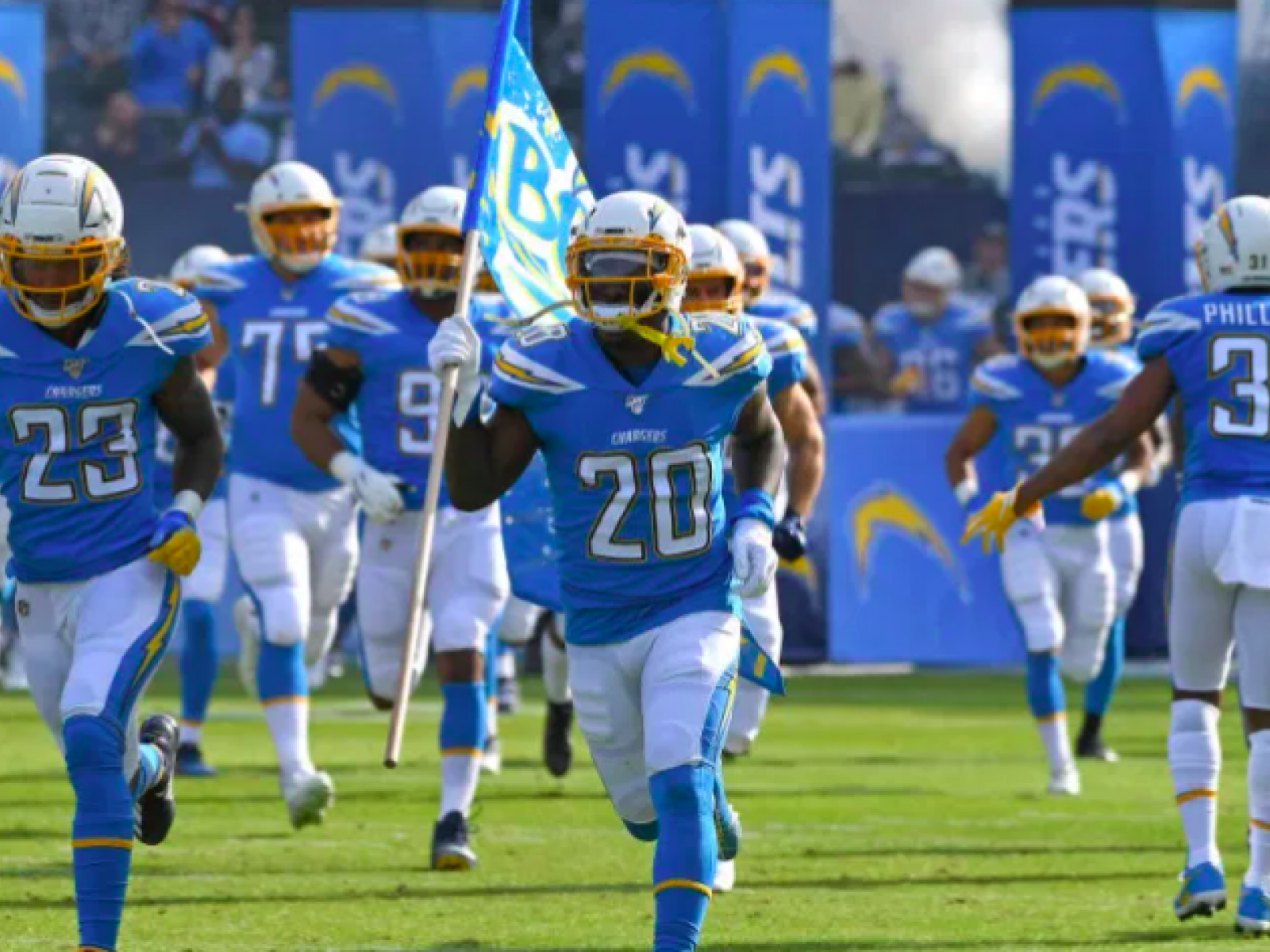 Ingram, Jones, James, Harris, these guys would all help.  But they couldn’t close out games when they were at full strength.  Bosa hasn’t been healthy all season.  I don’t know how he got so banged up already, but he is.  He looked like he’d been hit with a tranquilizer gun last week in Tampa.  Brady had more than enough time to find Miller, Howard, or Evans.  Mike Evans was limping around, angry enough to get a flag and still able to get open.  Hayward looked awful.  Davis’ pick six was nice, but it was kinda right to him.  As CBS showed, there had been a pick six in every Chargers-Bucs game since 2004.  This was the first time the team that got it couldn’t win, so nice work there.
Obviously, the fumble before the half was huge.  Of course, we all thought….game over.  But it didn’t have to be.  When you are a team who constantly shoots yourself in the foot and creates such bad mojo eventually you need flip the script.  They could have come out of the locker room angry and ready to take the Bucs out.  But they went 3 and out and kept bleeding.  Even when Herbert miraculously put them up on a 3rd down to the end the quarter when it seemed like all hope was lost…they gave the touchdown right back.  It was nice that the defense held the Bucs to a field goal and gave him another shot to pull out a score.  But the pass to Allen floated away.  Keenan was behind the defenders, but I don’t know if Herbert had already thrown it when they moved towards the ball.  Nonetheless, it was his third pick in three games and we were done. 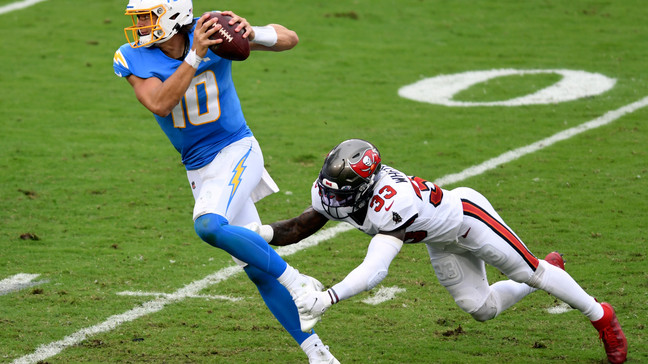 So now Lynn finally admitted that he’s the starter the rest of the way.  That’s great until we see him get batted around and the season officially slipping away.  That’s when we’ll wish it was Taylor in there.

The injury to Ekeler was awful.  One week you are almost catching the lateral to score a miracle touchdown, the next week you can’t even get on the medical cart.  I can’t see how that doesn’t require surgery.  I’ll believe he’s

coming back this season when I see it.  Justin Jackson carried the ball for the first time in ages, but didn’t impress.  It was nice that Lynn got Kelley the ball in the second half to bolster his confidence, but he didn’t do shit on the ground.  Justin Herbert was the leading rusher in Tampa, I believe.  Let that sink in for a moment.  It was great to see Badgley hit on the 50 plus yarder, though it looked like it wasn’t going in.  The miss ended up being a killer and maybe Lynn is right to avoid the long kicks.  Then again, we already have a punter kicking off, so it would be nice if we had a kicker who could check all the boxes.  I love Badgley and all, but it’s not called “show friends,” but “show business.”  We also got fucked on a few more calls.  The chop block looked highly suspect and the hit by Kyzir White could have been left alone.  But I have never been one to blame penalties, especially when the Chargers give us so many reasons on their own. 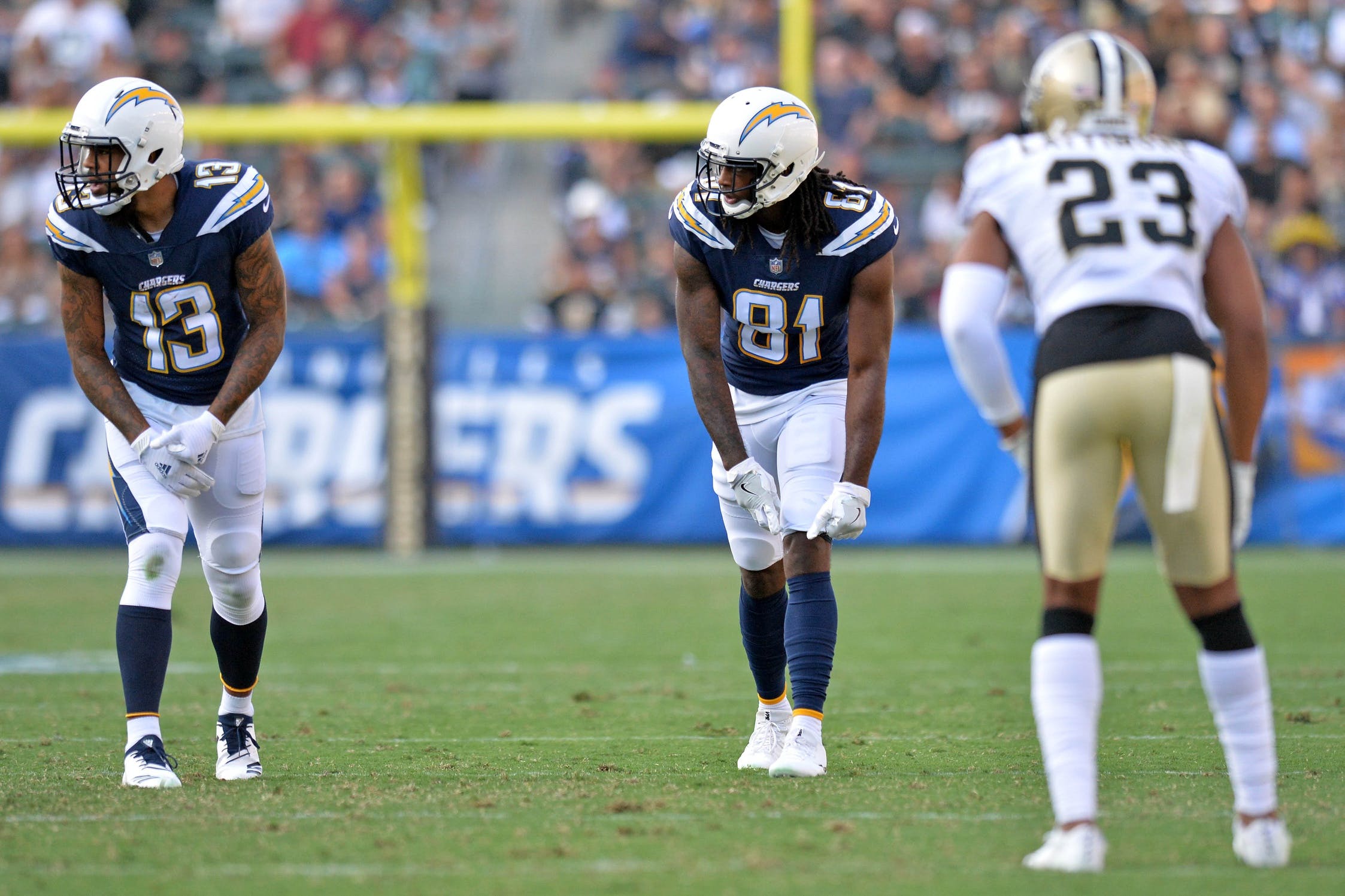 So now we may not have Bosa tomorrow, or at the very least will have the highly compromised version we saw the last 2 weeks.  I guess we are lucky that the Saints benched Michael Thomas, but like the Raiders winning today, I’m not convinced we can take advantage.  Fuck, the Raiders already beat the Saints.  I know I said it last week, but if the Chargers plan to do anything this season they need to win tomorrow.  Herbert knows he’s the guy now, although it didn’t seem like he was lacking confidence.  Maybe Mike Williams comes back, though the practice squad guys looked great last week.  This team needs to be the one that Lynn was hyping up on “Hard Knocks.”  He talked of a “tough ass team” that could put games on the shoulders of its defense to close out wins.  We’ve seen none of that.  If the Bengals don’t get called for OPI or don’t miss that chip shot, we could be winless.
Like Brady, Brees is not the player he was five years ago.  The last time we played him, Benjamin and Gordon gave the game away.  The only upside is that it led to Mike McCoy getting fired after the season.  But then the move to LA was announced and Lynn was hired.  I guess we’ll know after tomorrow night if this season is going to mean anything.  I guess a loss and we can all say its all about reps for Herbert.  But Telesco didn’t assemble this team for a rebuild.  Turner and Bulaga look like damaged goods and Harris didn’t look so good before he got hurt.  Do we really want to sit on the sidelines for another year while someone else wins a Super Bowl and wait for next season?  I guess it’s not up to us, however. 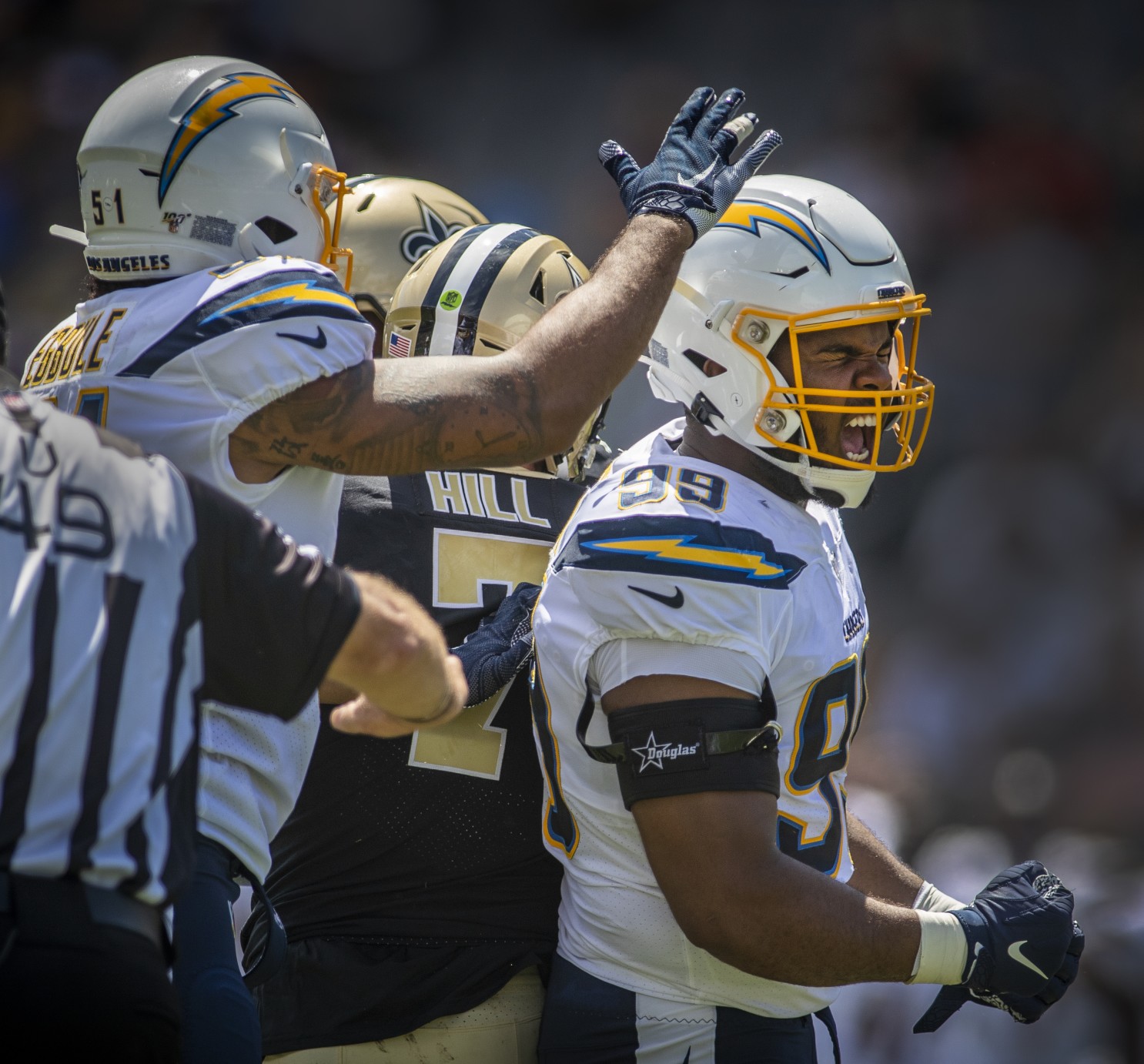 The reschedule reshuffle announced today means that our bye will be next weekend.  We were supposed to play the Jets and I just found out that I will be on Sirius XM’s Grateful Dead Channel next Sunday at 4:30.  I planned to step away from the game to do the interview, but now I won’t have to.  Then again, after tomorrow night I may wish to be doing something else during Charger games.  Anyway, I’ll be on “Tales From The Golden Road” with David Gans and Gary Lambert to talk about my book.  Hopefully, we won’t be coming off a loss for once.  Talk to you next week.
JIC,
RLW