The Week That Was for the Ottawa Senators

The Week That Was for the Ottawa Senators

What a weird week for the Ottawa Senators.

It began with an Austin Watson trade, included the announcement of another lawsuit and concluded with an article in the Financial Post that featured an extended interview with Senators owner Eugene Melnyk that contained some really interesting morsels of information that are worthy of discussion.

The 28-year old has played parts of six seasons in the NHL amassing 306 career games played. In those games, Watson has scored 36 goals and 77 points. His career season came during 2017-18 campaign when he fell just short of the 20-point threshold finishing with 14 goals and five assists.

Beyond his AHL career where he averaged 0.56 points per game (73 goals, 132 points in 234 games), Watson has stuck in the NHL principally because of his reputation for being a player whose grit, physicality and willingness to stick up for teammates endeared him to teammates and coaches.

“Austin Watson is a big, strong winger who will bring a significant presence to our forward group,” said Senators general manager Pierre Dorion. “He was among Nashville’s forward leaders in blocked shots last season, was the team’s leader in hits and is someone who is especially physical on the forecheck. We also expect him to be a valuable asset on our penalty kill.”

A deeper dive into Watson’s numbers reveals a player who isn’t even that effective of a forechecker. 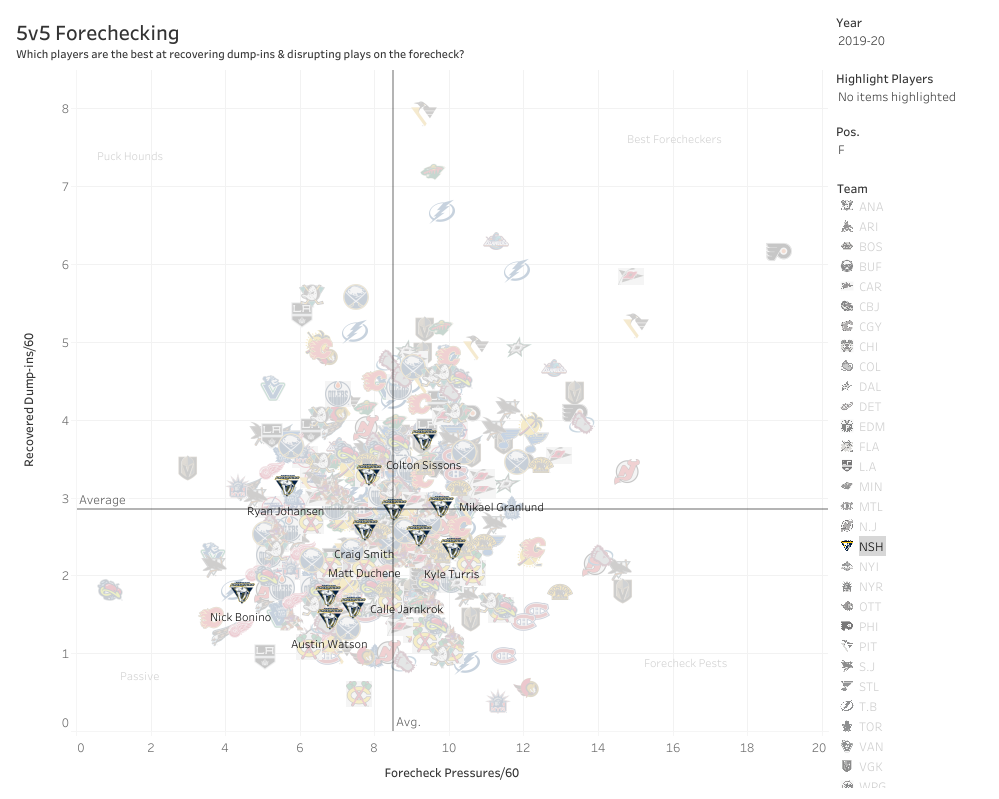 Using data from Corey Sznajder’s ‘All Three Zones Project’, it is easy to see that Watson was one of Nashville’s least effective forecheckers. He may have been physical from Dorion’s point of view, but Watson’s forechecking rarely culminated with the Predators creating a turnover out of it.

Hockeyviz.com’s data also shows that Watson’s isolated offensive and defensive impacts are skewed to the negative as well. 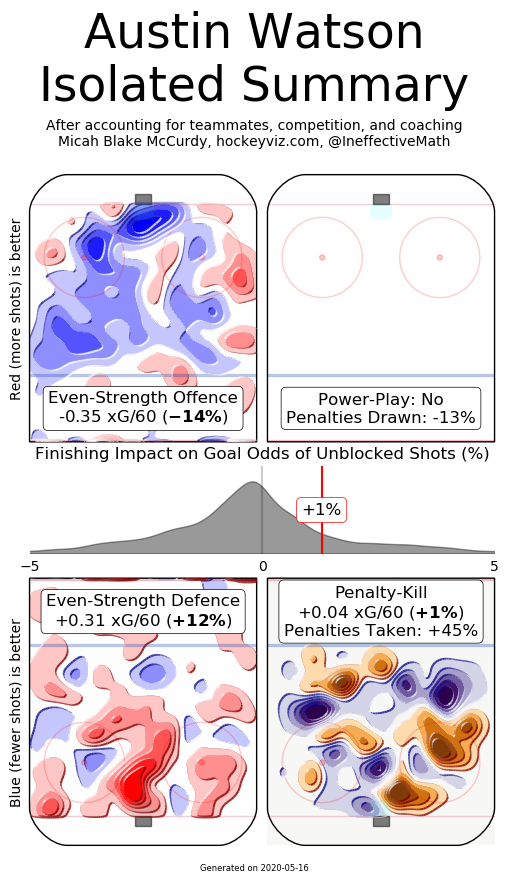 Watson’s struggles in both ends of the ice isn’t just some recent phenomenon.

Although he has always struggled mightily in the offensive end, his contributions in the defensive zone have gone in the tank. 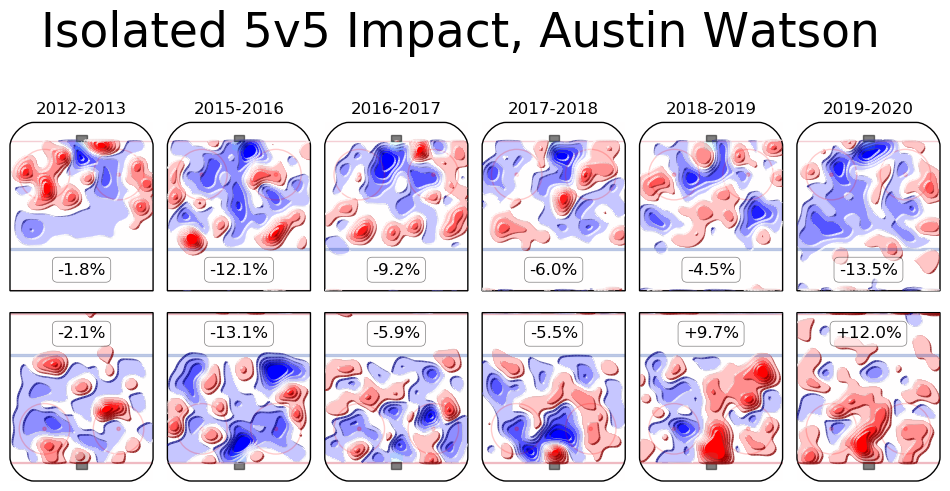 A contributing factor to these struggles is the fact that Watson simply had a difficult time in his own end transitioning the puck up the ice. Per Sznajder’s data again, we can see that his success rate in clearing the defensive zone and moving the puck up the ice was one of the worst on the Predators. 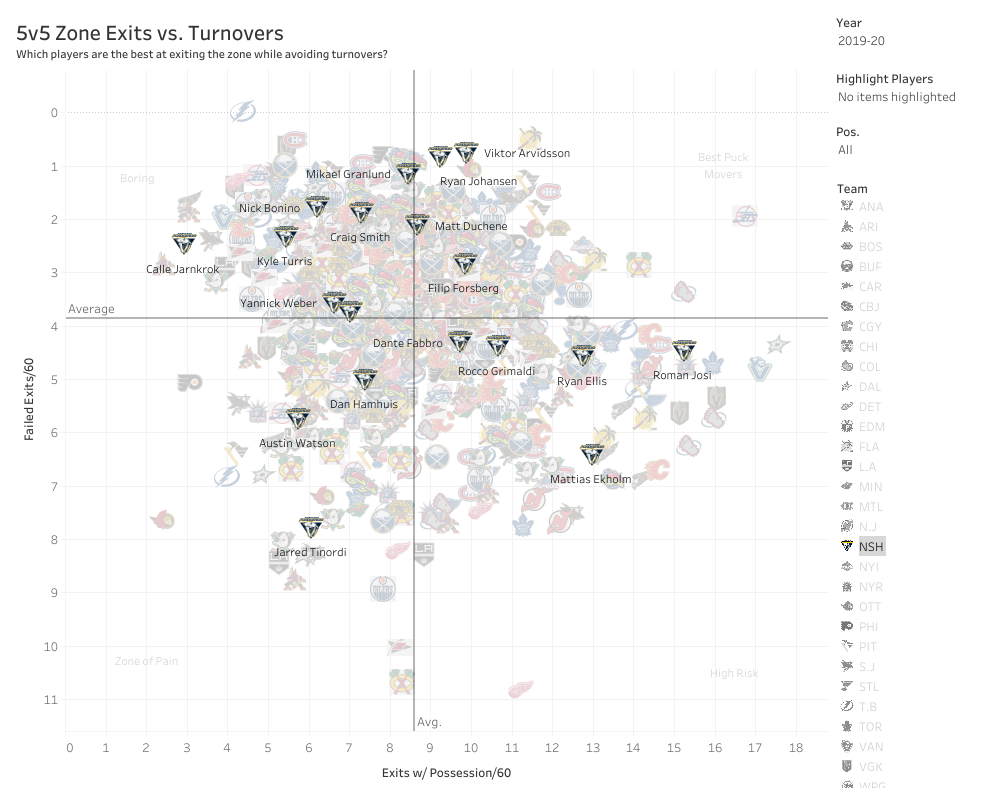 There obviously is something to be said about the low cost of a fourth-round pick, Watson’s relatively inexpensive salary ($1.5 million average annual value) and how the Senators desperately needed to add another veteran winger to the mix to ease the burden on Ottawa’s young forwards, but I don’t think Watson’s a great fit in the short-term or over the three years remaining on his contract.

The expansion rules for the Seattle expansion draft do indicate that the Senators will have to expose one forward and two defencemen who have played at least 40 NHL games the prior season or played in at least 70 games in the prior two seasons.

But, adding Watson to help fulfill this criterion is a pretty unimaginative way to do.

For a Senators club that realistically should not be expected to compete for a playoff spot for at least another two or three years, guaranteeing a roster spot to an underwhelming player like Watson leaves a lot to be desired.

Between the assets that the organization gave up to acquire Erik Gudbranson and Austin Watson or the money tied up to these two ineffectual players, it is hard not to believe that the organization’s resources could have been spent more wisely. For the same cost, the Senators either could have taken Duclair to arbitration and found a short-term bridge deal or they could have exhausted the free agent market.

I understand that there is something to be said about the Senators’ reputation amongst players, agents and other important people around the league, but few teams can offer what the Senators can in this market: cash and opportunity.

With a dearth of talent on the parent roster, Ottawa theoretically should have been able to offer a number of players the opportunity to play up the lineup with talented young players like Brady Tkachuk, Drake Batherson, Logan Brown, Thomas Chabot, Josh Norris or even an Erik Brannstrom.

In a perfect scenario, it could have been another Anthony Duclair situation. Take a depreciating asset in a difficult market, give the player an opportunity and hopefully cash-in on the player’s value should it appreciate down the road. (Read: that last part is key.)

Adding Watson does not do this and if anything, it helps fuel the notion that Senators brass is uninspiringly pays zero attention to the kind of publicly available analytical work being done or is just plain ignorant to the results and prefers the ol’ anachronistic scouting information instead.

Worst of all, the acquisition of Watson certainly raises some red flags because of his off the ice transgressions.

Watson pleaded no contest to a charge of domestic assault in 2018 and was suspended by the league for 27 games.

One year later, Watson was suspended again for an alcohol-related relapse.

Following the trade announcement, an article on the Tennessean’s website was making the rounds on Ottawa social media and it helped to shed light on how Watson’s spouse opened up about her relationship with Watson, his arrest, their struggles with mental health, addiction and substance abuse.

The truth of what happened in 2018 is going to be reserved to those involved and reading a bunch of news articles on the matter isn’t going to shed more light on the matter.

If Watson is a reformed person who has conquered his demons, that is awesome. I’m happy for the player and perhaps he can be a spokesperson within the community who can help people dealing with similar problems. And if he can positively impact or help his youngest teammates who will be experiencing fame, money and widely available drugs and alcohol, there is value in that.

I just don’t understand why the Senators would willingly invite that kind of attention and controversy to their organization now – especially since Watson is not particularly good.

Eugene Melnyk was back in the news this week when TSN’s Rick Westhead broke the story that the Senators’ owner filed a lawsuit against Ottawa Sun columnist Rick Gibbons for defamation.

In the wake of the revelation that the Senators and their charitable arm were going their separate ways, Gibbons penned two separate articles this past summer that looked at the deterioration of this relationship while questioning whether Melnyk was diverting charitable money for his own benefit.

My initial reaction to the lawsuit story was that it may serve the owner’s best interests to just let the story go since many people already have formed their own opinion of Melnyk and this lawsuit could simply have a Streisand effect and fuel more attention and negativity towards him.

There is no question that the organization’s best interests would probably best be served if the owner and management could stay out of the limelight and put all attention deservingly on the next wave of young players and prospects.

In saying that however, this lawsuit essentially serves as a strategy lawsuit against public participation (SLAPP) intended to deter critics from speaking out in the future.

As I mentioned at the beginning of this post, Melnyk was in the limelight this week being featured in an article written by Joe O’Connor that details how Melnyk, given his biopharmaceutical background, may be the best NHL owner to understand and gauge the problems that the league is faced during the Covid-19 pandemic.

Buried within the article are a number of very interesting details that are worth mentioning.

Melnyk affirmed that the Senators could break-even with 6,000 people in attendance at the Canadian Tire Centre with “modest food and beverage sales” if and when the league returns to play.

The most important disclosure was that the owner has a 112-page document referred to as ‘The Master Plan’ that details “how, position by position and player by player, the Ottawa Senators, will be rapidly transformed into Stanley Cup champions from a non-playoff team.”

It is an astounding revelation that fuels so many questions.

Who wrote the plan? Was it written by Melnyk or Dorion? Did the Senators hire and pay some freelance analyst to pen it for them? Why did they have to write out a plan? Why did it take 112 pages to arrive at the conclusion? How extensive is the player-by-player analysis? Does the plan include Photoshopped images of Melnyk hoisting the Stanley Cup as part of a parade on Elgin Street while riding a Zamboni driven by Spartacat?

These are the questions I need answers to.

According to Melnyk’s plan, the Senators will be a Stanley Cup winner within four years.

You read that right.

A Stanley Cup in four years.

It sounds unrealistically ambitious, but after Melnyk expressed to O’Connor that he hopes the Senators will be able to start construction on a privately-built new arena on lands that he owns in Kanata, well, the team’s Stanley Cup aspirations relatively don’t sound that outlandish.

Eugene Melnyk has always been a shameless promoter rather than a patient architect of success.

His impulsiveness, reckless words and actions have all helped undermine this organization’s long-term outlook before and have helped alienate himself to fans, the business community and the various levels of government here in Ottawa.

And as Jim Little infamously told Eugene, things would be better if he could avoid limelight. But, as this team inevitably improves through the organic growth of the team’s best young players and prospects, it will probably only be a matter of time before the owner puts himself back into it.