For nine seasons, no two players personified the rivalry between the Green Bay Packers and Tampa Bay Buccaneers than quarterback Brett Favre and defensive lineman Warren Sapp. It was two Hall of Fame players at the top of their respective games and two elite trash talkers jawing at each other on almost every play.

From 1995-2003, the two players faced off against each other 16 times. For the first seven seasons of this personal rivalry, the two teams were also division rivals so they met twice a year plus once in the 1997 playoffs.

While the games were competitive and often outstanding, the personal battle between Sapp and Favre was always the centerpiece of the matchup. 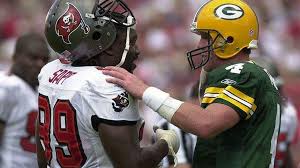 During his nine seasons with the Bucs, Sapp was voted to the Pro Bowl seven times and was All-Pro four times. During those same seasons, Favre won three league MVPs, went to six Pro Bowls and was All-Pro three times.

On the field, the two were intense rivals. But they also quickly developed an enduring mutual respect for each another.

“Warren Sapp was unblockable, literally unblockable,” Favre recalled. “Even when we were beating them, he would hit me pretty much every play. The more he hit me, the more it [ticked] me off and the more I wanted to play outstanding against him. Because I knew if I did, that was something.”

“Brett Favre in 1996 was a two-time MVP and a world champion,” Sapp added. “He was the best player in football and in my division. Tony Dungy walked in the room and said, ‘The Green Bay Packers are the target and Brett Favre is yours. Are you ready for the challenge?’ I said no problem. If I wanted all the notoriety in the world, getting over him would do it. We played some of the most classic battles. No other quarterback did that. I knew I was going to get his best.”

The two faced off 16 times against each other during the regular season. Sapp sacked Favre eight times in those games, but Favre’s Packers won 10 times with the Bucs beating the Pack just six.

The two met only once in the postseason, at Lambeau Field in the 1997 playoffs. Sapp had a dominant game, sacking Favre three times and recovering a fumble. But Favre and the Packers still won the war, beating the Bucs 21-10 en route to their second straight Super Bowl appearance.

But that playoff game took the personal rivalry and the battle between the two teams to another level. “Without that playoff game, Warren Sapp is just another guy playing the position,” Sapp said. “That day, everybody identified with two people fighting for their two teams. There was no malice in it at all it was all fun, joking. We’d play like two kids. The best part about it was he wanted it, too. He loved it. You come at me and I’m coming back at you.”

In 1998, the Packers started undrafted free agent Joe Andruzzi against Sapp and the Bucs. “First play of the game, Warren and I walk up to the line,” Favre remembered. “Warren lines up, digs his feet in under (center Frank Winters). He gets down on one knee and says, ‘Andruzzi, you picked the wrong night to make your first start.’ When I said, ‘hut’ I don’t think Joe ever saw him. He was by him so fast.”

Sapp remembers another game against the Packers when he was heading to the sideline just before the end of the third quarter.

“I heard someone shout after me, ‘That’s right Sapp, go take a blow.’ Excuse me? I turned around, and he had this big grin on his face. I said, ‘You talking to me?’ He got right up in my face. ‘Where you going, fat boy? We’re just getting started.’”

At the end of the day, the two future Hall of Famers brought out the best in each other and the best in their teammates.

“As good as he was as a player he was equally as good as a talker. If you were not careful, you’d get caught up in that and it would take you out of your game,” Favre said. “I think that was the brilliance of Warren. He always got under my skin. The relationship just kind of developed over time. Every sack added to it, every hurry added to it. Every jab he would say to me added to it. The competitive fire was there for both of us.”

Sapp agreed. “It was a match made in heaven,” he said with pride. “Two country boys that really, really loved the game, loved it on a pure level. You didn’t have to pay us. Let’s just go ahead with our boys and let’s go play.”

Both players won a Super Bowl and both had outstanding careers. Sapp was inducted into the Pro Football Hall of Fame in 2013 while Favre followed three years later.

Maybe former Packers quarterbacks coach Steve Mariucci summed up the rivalry best. “I’m sure their two busts in Canton will be jawing back and forth every night for eternity.”