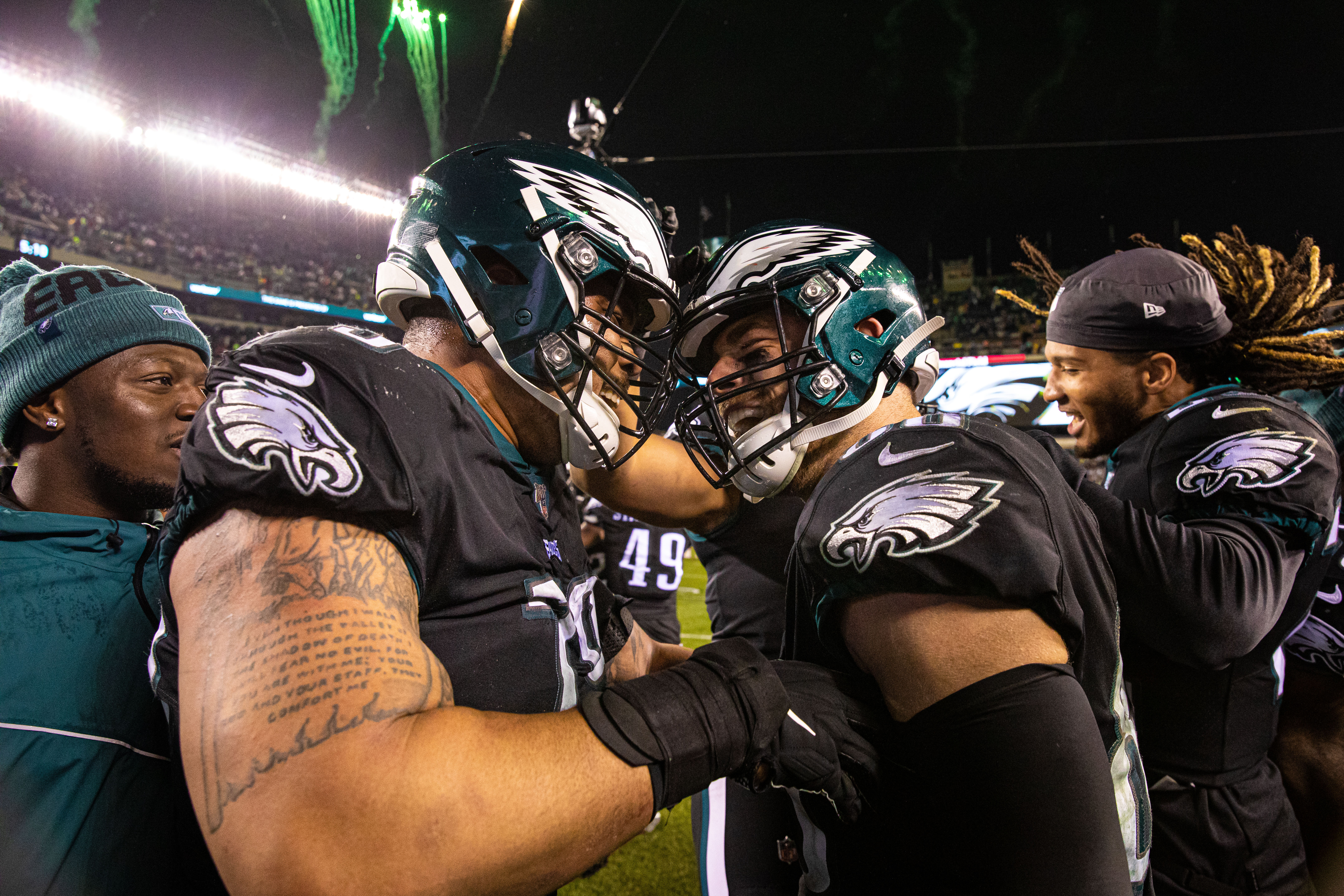 Actually it was an entertaining game… at least more entertaining to me than the presidential debate, which I had on my second TV screen along with the game.

Yet there were elements of the debate in the Eagles-Giants matchup— two flawed teams, both beaten up, neither exactly dominating the polls, and both subject to unexpected-yet-expected moments of poor execution.

The Eagles are by no means a better team than the Giants right now— they just got the last word in Thursday night’s debate at the Linc.

The Eagles have moved to 2-4-1 on the season after rallying to defeat the New York Giants on Thursday Night Football, 22-21. After New York gave its best punch of the night — a 97-yard touchdown drive headlined by Daniel Jones — to go up 21-16 with just over six minutes to play, Philadelphia scored 12 unanswered points to earn the win.

Carson Wentz led a 71-yard touchdown drive to give the Eagles to the lead with just 40 seconds to play after connecting with running back Boston Scott on an 18-yard reception. Along with the comeback, he finished his night with 359 yards passing, two touchdowns and one interception while completing passes to eight different Eagles receivers. He also ran for 15 yards and a touchdown. As for the Giants, they mustered just 325 yards of offense and struggle to protect Daniel Jones throughout the contest.

The Eagles had inconsistent offensive line play, a run defense that allowed 160 yards on the ground, a nonexistent run game of their own, yet Carson Wentz was able to give Philadelphia the victory. Wentz wasn’t particularly good either, but he made the throws he needed to make in crunch time. Wentz was 5 for 6 for 121 yards and two touchdowns on the final two drives for a perfect 158.3 passer rating.

New York’s defense allowed scoring drives of 68 and 75 yards on just 10 total plays late in the fourth quarter to give Philadelphia the win. The Eagles offense struggled the majority of the night as the Giants defense held them to nine plays for 11 yards to start the second half. The rest of the night Philadelphia ran 18 plays for 209 yards — 11.61 yards per play — to mount the comeback. The Giants defense was great for the first 39:08 of this game, but they were atrocious the rest of the way.

The Giants had this game won when Daniel Jones threw a perfect pass on 3rd-and-7 to a wide open Evan Engram. New York couldn’t have asked for a better throw from its second-year quarterback that would have given the Giants their second consecutive win.

Engram dropped the perfect throw with the Giants up 21-16 with 2:14 to go. The Eagles had no timeouts left and an Engram catch would have sealed the win. Jones should have been the hero that made the clutch throw. Instead, a bad Giants team has another heartbreaking loss.

Play of the Game as seen by CBS.com reporters Tyler Sullivan and Jeff Kerr:

“No disrespect to Daniel Jones and his 80-yard run, but Carson Wentz’s game-winning touchdown pass to Boston Scott takes the cake. On a first-and-goal at the 18-yard line with 46 seconds left, Wentz threw a perfect pass to Scott on a wheel route to give the Eagles the 22-21 victory.

“Wentz rallied this team from a 21-10 deficit with 6:21 to play and willed the Eagles to a victory. Philadelphia is now in first place in the NFC East thanks to Wentz’s third fourth-quarter comeback, tied with Ryan Tannehill for most in the NFL.”

“His toughness is wild.” – Boston Scott on Carson Wentz. The Eagles quarterback completed 25 of 43 passes for 359 yards with two touchdowns and an interception, including a rushing touchdown in leading Philadelphia to the win. Wentz was hit 10 times and sacked three times, but he saved his best football for the fourth quarter.”

The Eagles (2-4-1) have 10 days off before having their third home game in 15 days against the Dallas Cowboys on “Sunday Night Football” on November 1.

Lane Johnson was in and out of the lineup. The right tackle suffered another aggravation of his high ankle sprain, also seems to have bumped up a knee;

DT Hassan Ridgeway left in the 3rd quarter with a biceps injury;

CB/ST Craig James left the game late in the 4th with a possible concussion;

Worst of all, WR DeSean Jackson got smashed and buried on a late hit while fielding a punt in the 4th. It looked like a leg was involved and he had to be carted off. It doesn’t look good for DJax’ return next week.