The Packers were struggling in 2012, off to a disappointing 2-3 start and headed to Houston for a Sunday night showdown with the 5-0 Texans.

The game was almost a must win game for the Packers and their All-Pro quarterback came through big time. Aaron Rodgers completed 24-of-37 passes for 338 yards and six touchdowns as the Packers routed the Texans 42-24. The six scoring tosses remains a career high for Rodgers who now has 377 touchdown passes in his career. He tied the mark later that same season against the Bears. 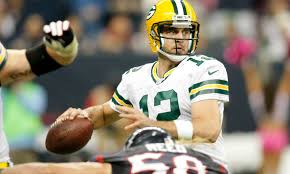 The Packers responded to the must-win situation and Rodgers was pleased with the way the team handled it. “This is just a team that has a lot of pride in our locker room,” Rodgers said. “I said it this week, there’s not any quit in that locker room. It’s almost better when people are doubting us a little bit, I think. We kind of band together. People tried to pull us apart this week and we stuck together and found our motivation.”

The Packers did a great job of taking advantage of Houston mistakes early. The Texans forced the Packers to punt on their first drive but then they lined up offsides and gave the Packers a first down. Rodgers quickly took advantage, tossing a 41-yard bomb to Jordy Nelson who beat cornerback Johnathan Joseph at the six-yard line and then dove into the end zone and after making a great over-the-shoulder-catch.

Nelson had a big day, catching nine passes for 121 yards and three touchdowns. Randall Cobb also went over 100 yards, catching seven passes for 102. James Jones caught a pair of touchdowns including a diving catch on a perfectly positioned low throw by Rodgers that only his receiver could reach. Meanwhile, tight end Tom Crabtree caught the other touchdown pass, a 48-yarder early in the fourth quarter that gave Green Bay a commanding 35-17 lead.

There was gamesmanship throughout the game. Houston’s All-Pro defensive lineman, J.J. Watt sacked Rodgers twice in the game and imitated the quarterback’s championship belt celebration.

Rodgers was unphased by Watt’s antics. “As a quarterback, it’s interesting to see the kind of dances that go on around you,” Rodgers said after the game, “It’s not often that you get a chance to dance back to them.”

The Packers played this game without starting running back Cedrick Benson who had an injured foot. Alex Green filled in and gained 65 yards on 22 carries to lead all runners in this game.

Once the Texans fell behind, their offense went into desperation mode. The Packers intercepted Texans quarterback Matt Schaub three times in the second half with Casey Hayward picking him off twice and Sam Shields nabbing the other interception.

Rodgers’ performance impressed Houston head coach Gary Kubiak. “Congratulations to Green Bay. Boy, they came in here and got after us pretty good,” Kubiak said. “They played great. We got our butts kicked. This guy can throw it around and light it up. We got there quite a few times free, and he made people miss. He’s a great player and he put on a show tonight.”

There was no doubt Rodgers was at his best. In addition to passing well, he consistently scrambled away from pressure and bought time to throw with his feet.

The win evened the Packers record at 3-3. This was the first of five straight wins for Green Bay. The Packers won nine of their final 12 games and won the NFC North title. The Packers defeated the Vikings in the first round of the playoffs before falling to Colin Kaepernick and the 49ers 45-31 in the divisional round.

For Rodgers, this win over Houston was one of his finest performances and the win over a previously undefeated team revitalized the Packers.

“We functioned pretty well,” general manager Ted Thompson said. “We came into a hostile environment and held our own. We played physical. We ran the ball a little better. We did a good job against their running attack.”