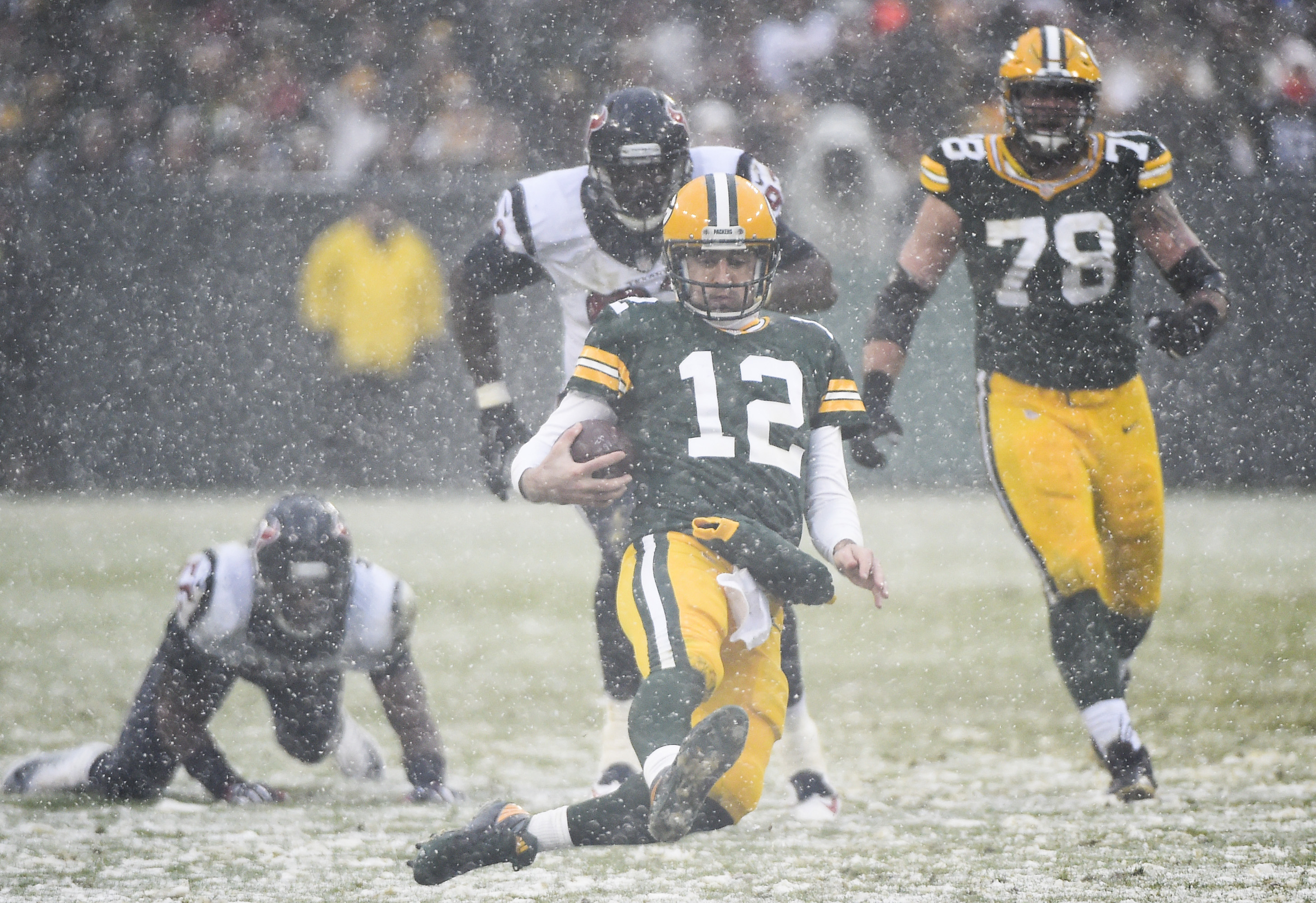 The Green Bay Packers head down to Houston to face the Texans in an interconference battle. This will be the first time the Packers face an AFC team this season. The Packers are 4-1 and are looking to rebound from a poor performance in their 38-10 loss in Tampa Bay. The Texans are 1-5 and fell to the Tennessee Titans on the road last week, 42-36 in overtime.

Green Bay leads the all-time series between these two teams 3-1-0. The two teams last met in 2016 at Lambeau Field with Green Bay coming out on top 21-13. The Packers have won both games in Houston, beating the Texans in 2004 and 2012.

Here is a look at six key factors that will determine who wins in Houston on Sunday:

The Texans defense is struggling against the run and the Packers need to take advantage of this weakness. Opponents are gaining 181.8 yards per game on the ground against the Texans and that ranks them last in the league.

The Packers must run the ball effectively against the Texans. Expect a big day from Aaron Jones and Jamaal Williams who should compliment each other well and keep each other fresh while picking up big chunks of yardage.

Jones suffered a mild calf strain in practice Thursday and will be a game-time decision. If Jones can’t go or is limited, expect A.J. Dillon to get more work supplementing Williams.

If the Packers take an early lead, it will be very tough for the Texans to slow down the Green Bay rushing attack which should have a productive game on Sunday.

Deshaun Watson is a talented, young and mobile quarterback and the Packers must make sure Watson cannot escape the pocket and beat them with his legs.

Watson is the Texans second leading rusher and he averages 4.7-yards per rush. His ability to extend plays and to gain yardage on the ground when necessary are a big benefit for Houston.

The Texans need him to scramble a lot because their offensive line has been shaky at best. Through six games, Watson has already been sacked 19 times and the Packers should be able to get some pressure on the Houston quarterback.

Green Bay’s pass rush has struggled this season. The Packers were near the top of the league at pressuring the quarterback a year ago, but this season the team has not been able to get near opposing quarterbacks with any regularity.

Getting Kenny Clark back into game shape will certainly help. The Packers are also looking for Za’Darius Smith and Preston Smith to return to something close to last year’s form. Rashan Gary should add pass rush as he gets healthy and Kingsley Keke has shown flashes but needs to be more consistent.

David Bakhtiari suffered a chest injury last week and has yet to practice this week. It is very possible he will not be available on Sunday and that would leave the Packers without their left tackle and best pass blocker.

The Packers have several choices if Bakhtiari cannot go but they do have to figure out their best option. Do they move Billy Turner to left tackle and slide Rick Wagner in at right tackle? Does Elgton Jenkins move to left tackle and then Jon Runyan starts at one guard position? Do they try Rick Wagner at left tackle again and leave the rest of the o-line intact? Whatever they do, they need to give Rodgers time to throw the football.

The Texans do get good pressure on opposing quarterbacks led by J.J. Watt and Whitney Mercilus who each have three sacks thus far this season.

Rodgers will need enough time to throw if the offense is going to revert to the form that made it so dangerous in the first four games of the season.

4. Slow Down the Houston Receivers

The Texans have a good crop of receivers which includes Will Fuller, Brandin Cooks and Randall Cobb. Fuller is their most dangerous deep threat while Cobb remains a consistent performer from the slot.

The Packers will have to match nickel corner Chandon Sullivan against Cobb and most likely will have shutdown corner Jaire Alexander on Fuller.

Kevin King is still nursing a quad injury that kept him out of last week’s game against Tampa Bay and the Packers clearly missed his presence. Josh Jackson was inconsistent against the Bucs and was stronger against the run than against the pass. King was a limited participant in practice and his availability is still uncertain.

Starting safety Darnell Savage is also nursing a quad injury and did not participate in practice earlier in the week. The Green Bay secondary doesn’t have as much depth at safety as they do at corner and Savage’s status is something to keep an eye on.

5. Don’t Let the Texans Run Game Get on Track

The Texans running game has been struggling all season and currently, Houston ranks last in the league with an average of just 73.5 yards per game gained on the ground.

David Johnson leads the ground attack with 350 yards on 87 carries. But Johnson no longer looks like the strong back he was when he played for the Cardinals. The Houston offensive line has graded out well at run blocking, but the team has yet to establish a consistent rushing attack. Part of the reason for that is the fact that Houston has been trailing in many of their early season games.

The Packers run defense remains a question mark but it must prevent this week from being Johnson’s coming out party.

The potential absence of defensive lineman Tyler Lancaster, who is nursing a shoulder injury and has not practiced this week, may hurt the Packers run defense. Krys Barnes has been a limited participant in practice and his performance against the run will be important as well.

The Packers will need Montravius Adams and Raven Greene to step up and help stop the run on Sunday.

The Packers committed their first two turnovers of the season against the Bucs and it cost them dearly. They never really recovered offensively from those two Rodgers interceptions and the offense never got into rhythm.

Defensively, Green Bay has not forced as many turnovers as they did a year ago. Through five games, the Pack has picked off only two passes as a team and they’ve recovered just one fumble. The defense needs to create more turnovers.

Houston is currently a minus-three in turnovers this season. The Packers need to win the turnover battle and revert to form by not turning the ball over themselves on Sunday. One big turnover could be the difference in a game like this.

Even good teams have bad games and the Packers had a stinker last week in Tampa, but the key is how do they respond. A championship-caliber team bounces back quickly and the Packers need to show they can play well after their poor performance a week ago.

The Texans are better than their 1-5 record so this game won’t be easy. The Packers are banged up throughout their lineup and that won’t help. Watson is a dangerous passer and the Texans have a strong receiving corps.

The Packers are the better team and should win a high-scoring contest.