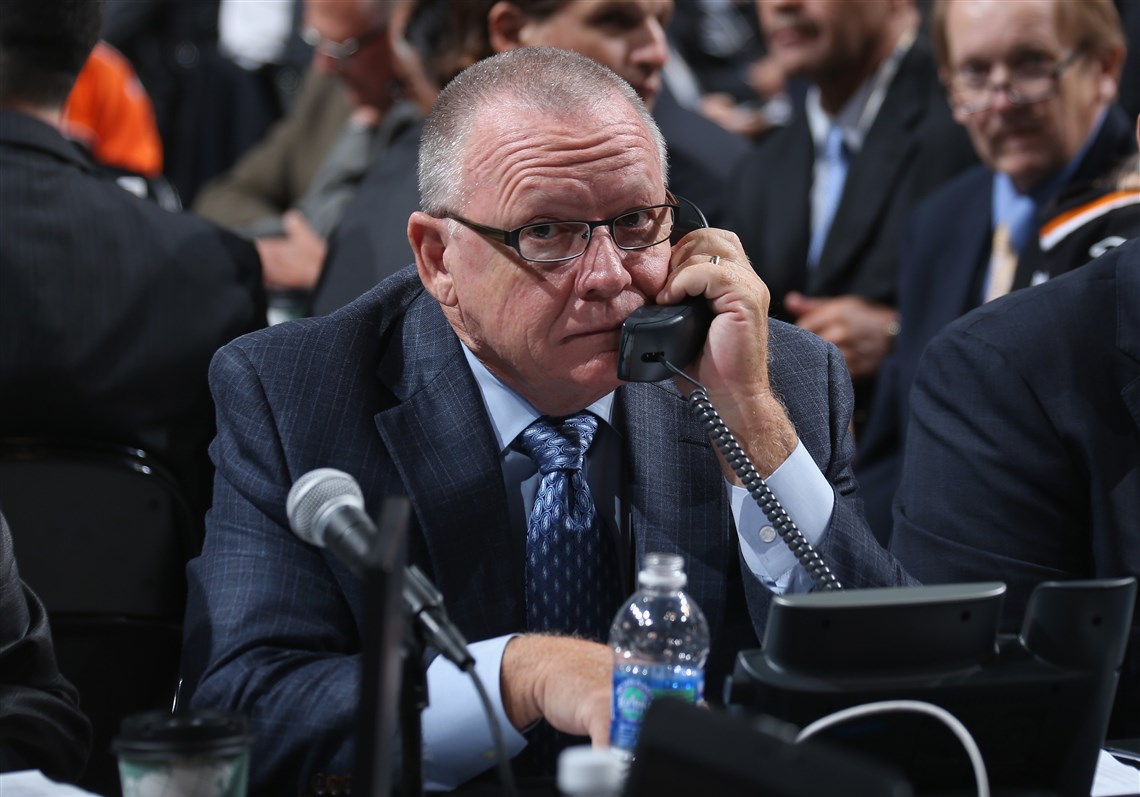 Less than two months have passed since Penguins executive Jason Karmanos was named general manager of the Wilkes-Barre/Scranton Penguins.

Karmanos joined the Penguins in 2014 alongside Jim Rutherford, serving as vice president of hockey operations before he was named assistant general manager in 2017.

Monday morning he was fired.

The Penguins announced director of hockey research, Sam Ventura, will assume Karmanos’ duties in the interim. Erik Heasley, manager of hockey operations, will serve as interim general manager of the AHL club.

Ventura, ironically hired by Karmanos as a consultant for the Penguins in 2015, was promoted to director of hockey research in 2017. He described his job as providing a “quantitative assessment of players, teams, strategies, contracts, and roster moves.”

Rutherford is reportedly looking to add to his hockey operations team that has seen a lot of departures over the past three years.

He had this to say about the shuffle:

“We would like to thank Jason Karmanos for his contributions to the organization over the past six years.

I have been evaluating our hockey operations department, and this is the first part of the process to re-organize our group.”

One would think, if a team were looking to re-haul their front office, they’d do it before multiple trades and free agency signings happen.

That would require a thoughtful plan to be in place, something Rutherford has proven to operate without.

When Mike DeFabo of the Pittsburgh Post-Gazette questioned Rutherford about the firing, he responded, “I’m not going to get into the reasons.”

Despite Rutherford’s aptitude to play musical chairs with the roster, moving on from a close friend that he’s worked alongside for 15 years at this point of the offseason seems out of character.

From Matt Vensel of the Pittsburgh Post-Gazette:

Asked about the timing of the dismissal, Rutherford replied, “I’m in the middle of reorganizing the hockey operations. I felt this was the right time.”

If Rutherford truly feels it was better to go through the heaviest part of the offseason before making significant changes, he’s even more ill-equipped for his position than I thought.

Rumors have been swirling that Rutherford’s ex-assistant general manager Jason Botterill will eventually make his way back to the organization. Rutherford has stated on numerous occasions that he would like to have him back, but I struggle to believe that Karmanos had to go for it to be a possibility.

One of the two following statements are true, and neither of them are a mark of confidence for an organization that has continuously stumbled over itself since winning back-to-back championships.

Either Rutherford has been incredibly poor at identifying which players would fit best with the Penguins, or his idea of a winning lineup changes on a weekly basis. Or both.

At the beginning of the offseason Rutherford said he was looking to cut salary. He proceeded to take on nearly $5M per season for a third pairing defenseman and another million for a player that might not crack the lineup. This was the same trade that sent out one of their biggest cap anchors, Patric Hornqvist.

Rutherford also sent a rather large package to Toronto to acquire forward Kasperi Kapanen before the Stanley Cup had been awarded. Toronto eventually traded a very similar player, Andreas Johnsson, for a much smaller return.

Toronto general manager Kyle Dubas was surprised he was able to get such a haul for Kapanen.

Rutherford’s hands were tied before he could even think about dabbling in what was a value-packed free agency.

To top it off, Rutherford bought out the final three years of Jack Johnson’s five-year deal only to turn it around and sign defenseman Cody Ceci, albeit a much shorter and cheaper deal than Johnson’s.

While Rutherford’s statement is true, it alludes to him viewing analytics as a way to validate preconceived ideas rather than it being a significant part of player and team evaluation.

Does ownership see more value in analytics than Rutherford does?

They’re well-aware of the discontent from fans over the Johnson and Ceci signings.

Is ownership sending a warning sign to Rutherford by dismissing Karmanos and temporarily promoting their stat-savant?

Josh Yohe of The Athletic suggested on numerous occasions that Rutherford’s job isn’t in jeopardy and that he will likely retire with the organization.

It makes sense that ownership would step in and give Rutherford a chance to right the ship before moving on entirely. He did bring the Penguins two Stanley Cups not that long ago.

On the other hand, the Penguins have crapped away three consecutive seasons of Crosby and Malkin’s time together. With both of them rapidly approaching their mid-thirties, there isn’t much time to continue throwing shit at the wall and hoping it sticks.

The Penguins are a moderately better team now than they were when they were knocked out of the Stanley Cup play-in round by the Montreal Canadiens.

Johnson, Justin Schultz, and Hornqvist are all gone. Though both are somewhat reclamation projects, Kapanen and Michael Matheson are younger and more dynamic players.

The issue with Rutherford’s offseason is the constant flip-flopping between what comes out of his mouth and what he actually does.

It’s impossible to be certain what prompted Karmanos’ firing, but there’s serious reason to believe Penguins ownership is turning cold on Rutherford.