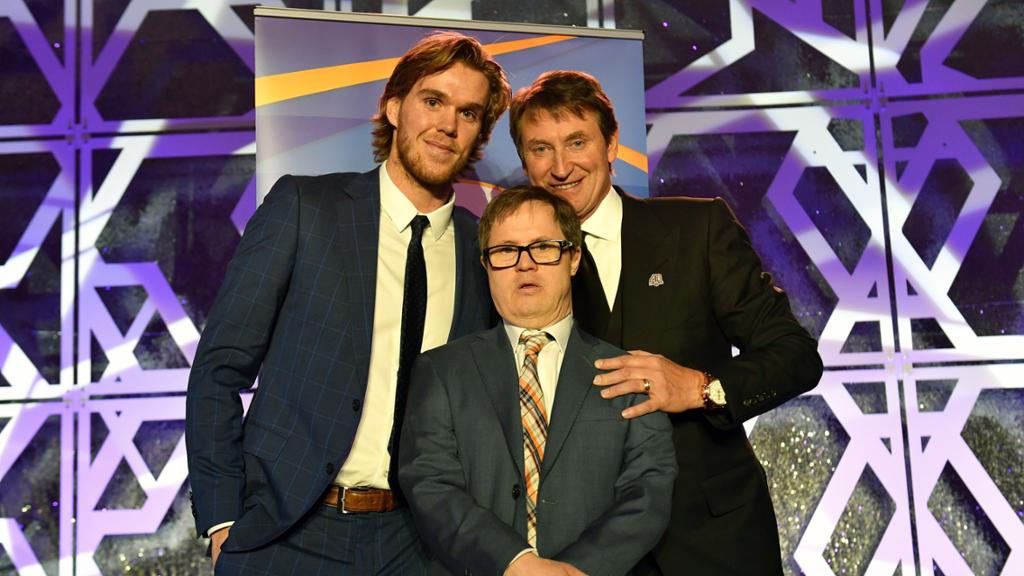 Joey Moss was a fixture for decades in the locker room of the Oilers and the Edmonton Football Team and was as much a part of Edmonton’s sporting image as anyone else. On Monday, one of the icons of the city passed away at the age of 57.

Joseph Neil Moss was born in Edmonton on September 25th, 1963, the 12th of 13 children. His story with our pro sports teams began in the mid-80s when Wayne Gretzky, at the time dating Joey’s sister Vicky, was impressed with his work at a local bottle depot. Gretzky, after seeing Joey at work went to Glen Sather to get him a gig with the Oilers in 1985. Joey would take on a role as a locker room attendant and complete various tasks which included filling water bottles and helping fold towels but his impact would go so much further. The following year he’d join the Edmonton football staff before hockey season, kicking off a longstanding tradition for both teams.

Moss never let being born with Down Syndrome, a disorder that causes developmental delays and disabilities intellectually, stop him in life. Joey’s personality and humour was something that players, staff, and anyone who came in contact with him over the years loved. He did TV commercials and was even on billboards in the city. Joey became one of the boys in the locker room and a sports celebrity.

Among some of the longest-lasting images in Oilers franchise history have to be Moss behind the bench belting out the Canadian anthem with all of his heart, the most famous time of them all coming during the 2006 playoff run.

To say that many in the sports world were touched by Moss would be a tremendous understatement as the tributes came pouring in on social media.

Condolences to the family and friends of Joey Moss. Every team needs someone like Joey. Peace to everyone in the city of Edmonton, I know how much he meant to you. RIP.

Incredibly sad to hear of the passing of Joey Moss. Joey was such a good friend, and an inspiration to all he met. Our lives were enriched in so many ways by his pressence. My condolences and love to the entire Moss family. We all are better off having known Joey as a friend. 🙏

Joey Moss lived a remarkable life and was an inspiration to so many. Hard to think of a person in hockey more universally loved, even after he ran over your feet with a vacuum in the Oilers dressing room. Truly Edmonton’s favourite son. Condolences to his family and friends.

The @EdmFootballTeam and CFL are deeply saddened to learn of the passing of Joey Moss. pic.twitter.com/cFiA2DKAYE

Moss’s tenure with the Oilers was among one of the longest in the franchise, spanning into four decades of service. In 2003 he was the recipient of the NHL Alumni Association’s Seventh Man Award honouring his work behind the scenes. In 2015, he was inducted into Alberta’s Sports Hall of Fame.

For all that he did in his life and what he did in the Edmonton sports community, I hope that he gets a banner and plaque along with the other greats of both Oilers and Edmonton Football Team history at Rogers Place and Commonwealth Stadium. I hope one day when mass gatherings can happen again, he’s given a proper ceremony at Rogers Place. The legacy of Joey Moss will forever remain in the fabric of the city and he deserves to be honoured once again.