In breaking news this afternoon, the Ottawa Senators have signed Alex Galchenyuk to a one-year contract worth $1.05 million.

The third overall pick from the 2012 NHL Draft was an unrestricted free agent for the first time in his career.

To see Galchenyuk settle on a modest contract like this speaks to how far the third overall pick from the 2012 NHL Draft’s stock has fallen. In signing with Ottawa, he will be joining his fifth NHL team since the 2018 calendar year.

Since scoring 30 goals as a 21-year old in the 2015-16 season, Galchenyuk’s production has languished over the past four years.

Galchenyuk is a player whose defensive metrics have always been porous. Eventually, they helped contribute to him being moved off his natural centre position.

Hockeyviz.com‘s visual tools help illustrate just how much of a burden Galchenyuk has historically been to his teams at five-on-five.

For those of you who are unfamiliar with how to read these visuals, the top portion of the rink refers to his offensive contributions. The colour red signifies areas where the team generates more than the league average rate of shots when the player is on the ice. Blue denotes areas where the team generates less than the league average rate of shots with said player on the ice. In looking at the offensive zone areas, it is preferred to see a bunch of red and a positive impact percentage.

On the bottom portion, or defensive end, you want to see the opposite. Blue signifies shot suppression and negative impact percentages are important.

With Galchenyuk, I cannot stress enough how these past four seasons have been rough. He not only has been a terribly ineffective scorer, he is a tragically flawed defensive player.

The saving grace is that Galchenyuk actually seemed to improve considerably over a small sample size of games after being dealt to Minnesota at the trade deadline.

Over that 14 game stretch, Evolving-Hockey had Galchenyuk recording a 0.4 WAR while being a positive contributor on offence and defence. According to NaturalStatTrick.com‘s data, Galchenyuk’s 2.09 points per 60 minutes of five-on-five ice time with Minnesota eclipsed his 2015-16 rate (2.07).

Interestingly, despite these metrics and the fact that Galchenyuk averaged half a point (three goals and seven points) per game, a middling Wild team elected to move on.

I understand why the Senators are rolling the dice on the signing.

Galchenyuk has pedigree and at 26-years old, he’s at an age where he can fit in with this this young core. As a team that should not have realistic playoff expectations, management likely believes that they can afford Galchenyuk the opportunity to get regular even strength and power play minutes. 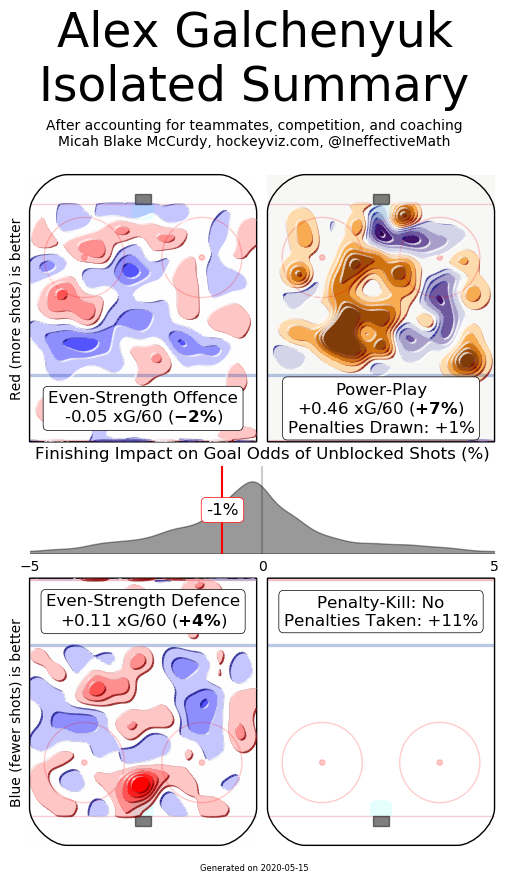 Considering that he was good on the power play last season and he played well enough in a small sample in Minnesota, maybe that should warrant an extended look on a player, who if he produces, could potentially fetch the Senators an asset at the 2021 trade deadline.

The fact that Galchenyuk has to look at this season as what could potentially be his last in the NHL as a motivator, could help. But, after Anthony Duclair’s career offensive year last season, there is probably something to be said about Senators management tricking itself into believing that they are an organization that can turn this player around.

The concern that I have is that the Senators have essentially given a one-way contract to a depreciating player at the expense of providing an opportunity to the prospects that this organization has developed internally.

Prospects like Josh Norris, Logan Brown and Alex Formenton are players who should have been in the mix for an NHL job after their strong seasons in the AHL last year.

Barring the possibility that Tim Stützle cannot or will not be released from his contract with Mannheim, the addition of Galchenyuk may essentially mean that two of of the three prospects that I referred to in the previous paragraph will be in Belleville to start the year.

Josh Norris made waves in his first professional season as a 20-year old. In 56 games with Belleville, Norris led all AHL rookies in scoring with 31 goals and 61 points. As a prospect, Norris was renowned for his skating and defensive aptitude, but by averaging more than a point per game, Norris’ offensive upside as a prospect may have been overshadowed. Having turned 21 year old in May, his age and play has forced the question. Is there anything left for him to prove at the AHL level?

If Norris’ offensive output was a nice surprise, Alex Formenton’s 2019-20 season blew everyone’s expectations out of the water. The speedy left winger was often portrayed as a safely projectable third liner who would principally generate all of his offence in transition off of the rush.

Last season demonstrated that there may be more offensive upside to Formenton’s game than was previously anticipated. Formenton’s head and hands really started to catch up to his amazing footspeed and the results were a pleasant surprise.

With only one professional season under his belt however, the organization can afford to be more patient with Formenton. Another year in Belleville will allow him to hone his strength and play more of an offensive role than would be provided in Ottawa.

Logan Brown is the eldest of the trio at 22 years old and he has played professional games in each of the last three seasons. There is no question that injuries have helped rob Brown of some development time over the past number of years, but he was still a point-per-game player at the AHL level last season.

Even in the 23 NHL games that Brown played last season, his offensive numbers were modest, but his isolated offensive and defensive zone impacts were pretty good for a young player. 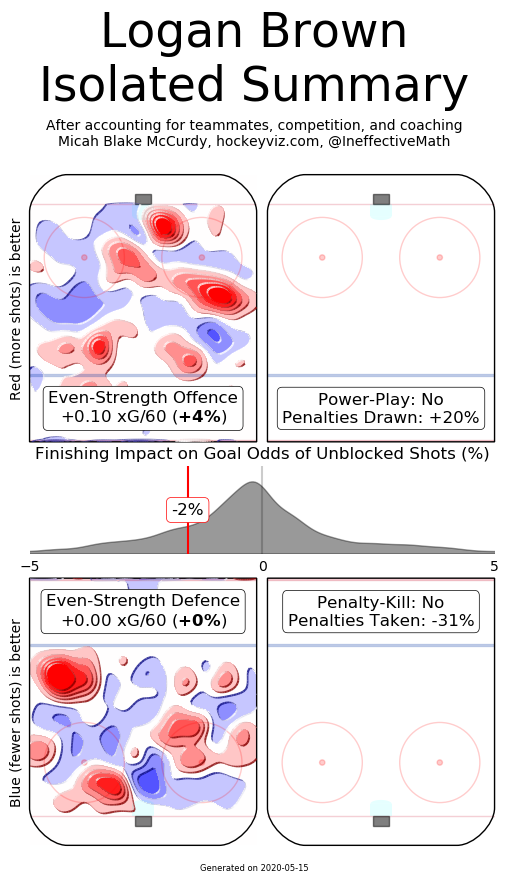 As a selfless pass-first player, Brown is never going to light up the lamp. Underneath the hood however, there is enough to like about his size, playmaking and ability to shield the puck to help preserve the offensive zone cycle to give him an extended look at the NHL level.

Inevitably, this situation may cause some to allude to Cody Ceci or Curtis Lazar’s failed development as examples of players who were adversely affected by being rushed to the NHL level. These people will argue that Galchenyuk’s presence will allow prospects like Brown, Norris and Formenton to marinate at the AHL level for a little while longer.

It’s a false equivalency to assume that these prospects will have their development be stunted because non-skilled entities like Ceci or Lazar failed to fulfill their potential. Every prospect is unique and will develop differently. There is no one-size fits all strategy when it comes to player development and it’s just as easy to make the argument that Curtis Lazar and Cody Ceci simply weren’t very good prospects.

Josh Norris, Logan Brown and Alex Formenton are good prospects who deserve an opportunity to play. I can understand the sentiment that these prospects will have to come to camp and earn a look, but a very flawed Galchenyuk just received a one-way deal worth $1.05 million after coming off four sub-replacement level campaigns.

What has he done recently to earn that contract?

It is a fair question to ask.