Flashback 2000: He Did What? Antonio Freeman’s Incredible Catch Beats Vikings in OT

Flashback 2000: He Did What? Antonio Freeman’s Incredible Catch Beats Vikings in OT

Packers wide receiver Antonio Freeman made one of the more incredible catches in Packers history on a rainy, windy Monday night at Lambeau Field. The impossible play gave the upstart Packers a stunning 26-20 overtime win over a Vikings team that came into this game with a 7-1 record. The win improved Green Bay’s record to 4-5.

The play shocked announcer Al Michaels who simply said, “He did what!???!” when he watched the replay and it confirmed that Freeman caught the pass that won the game.

Freeman admitted there was luck involved in this play. “As I rolled back, I got an early Christmas gift, I guess,” Freeman told reporters after the game. “Hey, who said football was all skill? Tonight, we got our lucky bounce.”

Head coach Mike Sherman added, “No, I wouldn’t call it a miracle. I’d call it a happy moment. It was an even game and we made a play, a very special play, at the end. It’s a great win.”

From the beginning, this was a back and forth affair. The weather conditions probably helped even things up as it was pouring rain with wind gusts of 25 miles per hour.

“The ball was changing trajectory all night,” Freeman said. “It affected our receivers…The type of season we’re having, we needed a break. We got one tonight.”

The Vikings led 13-10 at halftime when Gary Anderson booted a 48-yard field goal as time expired in the second quarter. Ryan Longwell answered midway through the third quarter with a 41-yard field goal to tie the game at 13-13.

The Vikings took the lead back late in the third quarter on a 45-yard pass from Culpepper to running back Robert Smith who outran Tod McBride and LeRoy Butler to the end zone. But Green Bay’s Allen Rossum ran the ensuing kickoff back 90 yards before being tackled at the Minnesota two-yard line. The Packers tied the game at 20-20 two plays later when Green ran the ball in for his second touchdown of the game.

It looked like the Vikings were going to win the game in regulation. They lined up for a 33-yard field goal try by Anderson on the final play of regulation that would have given them a 23-20 win. But holder Mitch Berger bobbled the snap and threw a desperation pass that was intercepted by Packers CB Tyrone Williams which forced overtime. If Berger would have spiked the ball, the Vikings would have had enough time attempt another kick since it was not fourth down. Instead, the game was headed to overtime.

Green Bay won the toss and immediately moved downfield. Favre connected with wide receiver Bill Schroeder for 22 yards and a key first down. Two plays later, it was third down for Green Bay at the Minnesota 43. The Vikings came with a blitz and Favre had to unload the ball in the general direction of Freeman. Cornerback Chris Dishman had good position on the play and went for the interception. With the wet ball and windy conditions, he missed and the ball bounced off Freeman’s back as he hit the turf and then bounced into his arms. Freeman got up quickly and ran untouched the final 15 yards into the end zone. 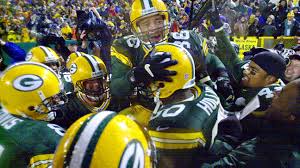 After the catch, Favre rushed into the end zone to celebrate and asked his receiver if he made the catch. But in the confusion of the celebration, Favre ended up asking Donald Driver instead of Freeman. Driver told Favre he wasn’t sure if it was a catch or not. Eventually, he found Freeman who told him, “I caught it.”

In the rain, Favre finished 17-of-36 for 235 yards and two touchdowns. He did not throw an interception. Freeman finished the game with five catches for 118 yards and the touchdown.

The Vikings committed five turnovers in the game including three picks thrown by Culpepper. Smith ran for 122 yards and caught two passes for 67 more yards while Randy Moss had six catches for 130 yards but did not score against the Packers. Darren Sharper picked off two Culpepper passes while Mike McKenzie and Tyrone Williams had one interception each.

The Packers finished the season with four straight wins to finish with a 9-7 record although they still missed the playoffs. That included 33-28 win over the Vikings in Week 16 to complete a season sweep of the eventual NFC Central Division champs.

For those who saw it, the catch by Freeman was one of the craziest finishes to a Packers game in years. Even Favre was shocked by it. “I don’t even know if you’d call it a play,” Favre said after the game. “That was unbelievable. I don’t know if I’ve ever been a part of anything like that.”