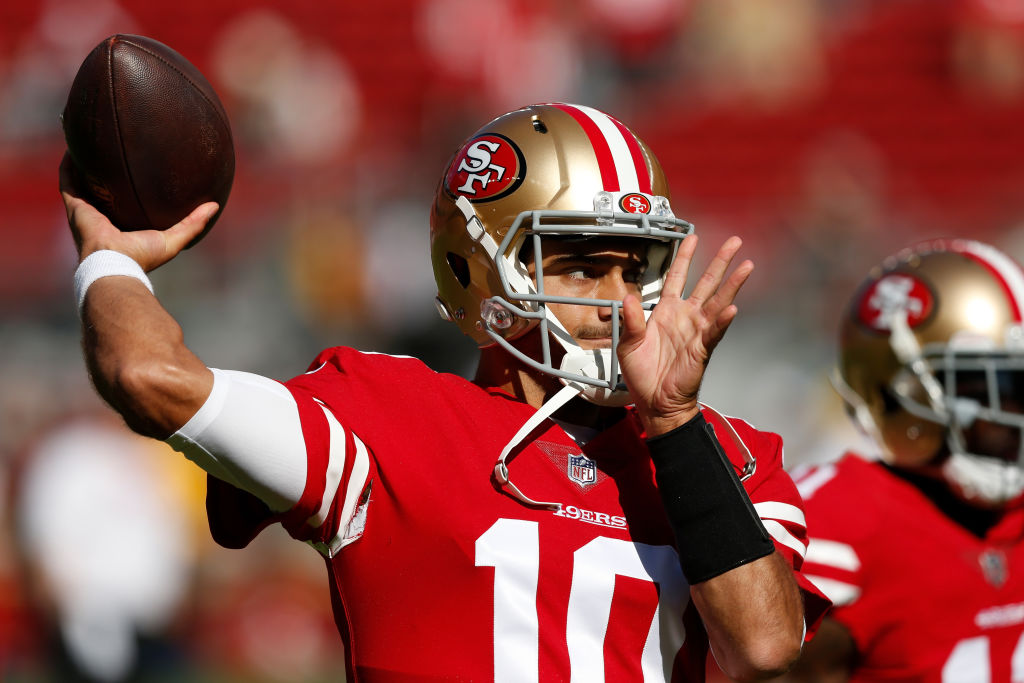 It’s a story as old as time itself…a quarterback with a world of promise takes the reigns of a franchise, but never lives up to the hype.

He’ll win some games, here and there, maybe a division, a playoff game, maybe even lead a team to the Super Bowl, but in the long run, he’s just not the guy.

A flash in the pan.  A good run.  A nice memory- something to smile about.

I think it’s pretty safe to say we can add Jimmy Garoppolo to the list.

Let’s be real honest about this, Garoppolo isn’t the guy in San Francisco.  Many people talked about it last year, but as a 49ers fan, you just couldn’t face it.  Garoppolo beat Aaron Rodgers twice.  He went to New Orleans and won.  He went to Seattle and won.  He won a division title, a conference championship game, and was seven minutes away from winning a Super Bowl.

And yet…he’s not the guy.

Sanchez, Grossman, and Bledsoe could have won those two playoff games in the NFC with the 49ers offense and defense last year.

None of them would have won the Super Bowl, which Jimmy didn’t do either.

It takes a certain magic that some players have, heck, even Nick Foles has it.  But not Garoppolo.

The 49ers always had their doubts, it’s why they set up the contract the way they did, because it gave them an out just in case he wasn’t their guy, and now is the time to finally call the bluff, and walk away.

In the offseason, the 49ers are better off just starting over again at quarterback, because let’s be honest here, when healthy, they have an awesome team.

Now imagine it with Garoppolo…a quarterback who has 22 of Kyle Shanahan’s 27 wins in the NFL as a head coach of the 49ers.

It’s time to move on.  Send Garoppolo back to the Patriots where Bill Belichick loves him, and just go get either a free agent passer, or pick a gun slinging rookie like Texas A&M’s Kellen Mond in the upcoming draft, because that’s what these 49ers need.

They need a gun slinging play maker, look at Arizona and Seattle.  Look at what Dak was doing before he got hurt.  Look at Lamar Jackson, Josh Allen, Justin Herbert, Joe Burrow, and Patrick Mahomes- look at their play and compare that to what Garoppolo is doing.

It’s very disheartening to see the rest of the NFL playing ball the way they are, and then you see what the 49ers are doing with Garoppolo.

It’s not flashy for them, I get it, but this is still a franchise that won Super Bowls with mobile quarterbacks while most of the league played with pocket passers.  The 49ers need to catch up with the times and go get themselves a play-maker, not a pitching machine.

I like Garoppolo, just not with the 49ers anymore.  He doesn’t fit their system, their vibe, and their idea of what they want from their quarterback, and you can see the frustration in Kyle Shanahan’s face after another bad throw, or another bad interception.

And you want even more?  How about a recent interview the coach gave in which he acknowledged the play of mobile quarterbacks like Mahomes, after vouching more for the pure passers like Manning and Brady.

Perhaps, after years of thinking that way, Shanahan has had a change of mind, with seeing what is going on in today’s NFL.

This isn’t a knack on Garoppolo, or to call him a bad quarterback.  I think the fact that he’s the only quarterback to have not only a winning record, but to have 22 of Shanahan’s 27 wins speaks volumes- recall that Garoppolo went 5-0 to start his 49ers career, while the other starters that seasons, combined to go 1-10 with the same team.

That tells you something.

Garoppolo is a legit starting quarterback in the NFL, but he doesn’t fit the 49ers.  He needs to go back home to the Patriots, to a team, coach, owner, and offensive coordinator that love him, and are desperate for a quarterback after this season.

It makes too much sense not to happen.

If you have doubts that your team can win a game solely because of who your quarterback is, then maybe its time to move on.

It was a good run for the 49ers and Garoppolo, but they need to find a quarterback that fits their offense, or they risk wasting away a lot of talent in the already loaded NFC West.