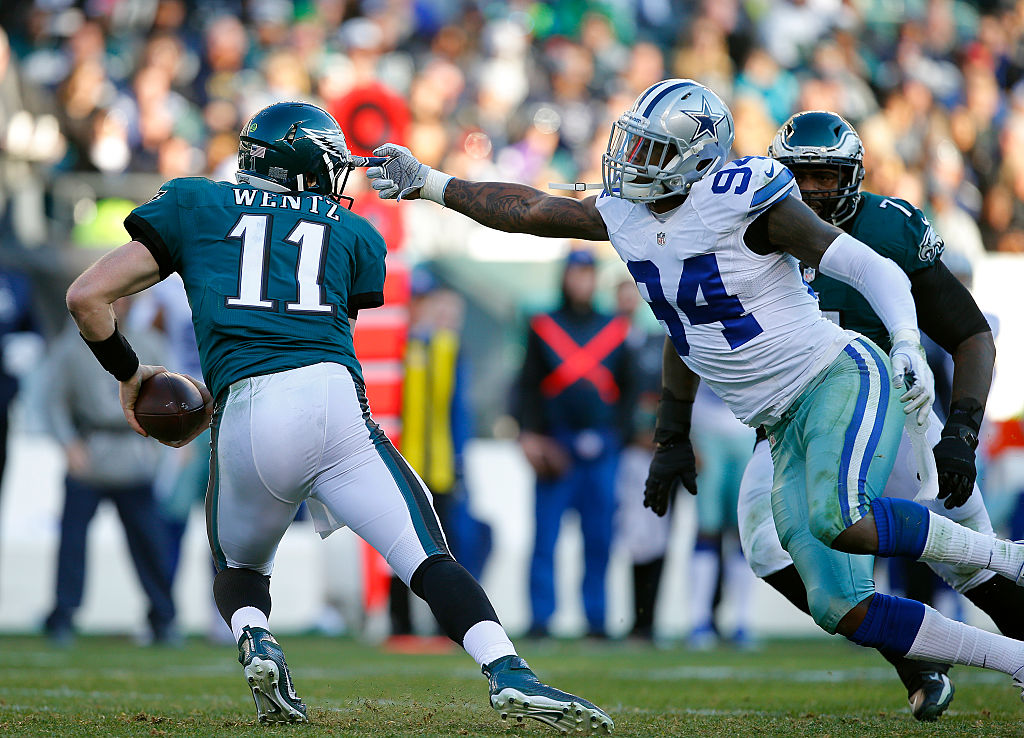 Ugh. The Eagles were pretty bad, but Dallas was worse. One of those games that needs to be graded on a curve…

The Philadelphia Eagles couldn’t give the game away no matter how poorly they played.

Carson Wentz threw a pair of touchdown passes to overcome four turnovers, Rodney McLeod returned a fumble 53 yards for a score and the Eagles beat the Dallas Cowboys 23-9 on Sunday night.

A pair of two-win teams fighting for first place in the weak NFC East in Week 8 put on a sloppy performance fit for the preseason instead of prime time.

The Eagles (3-4-1) took control of the division with their second straight victory. Dallas (2-6) has lost three in a row.

“It didn’t look pretty,” said Eagles defensive end Brandon Graham, who had one of the team’s two strip-sacks. “We knew it was going to be a battle. We held strong.”

“We clearly understand what this loss does to us,” Cowboys first-year coach Mike McCarthy said. “But we need to rally and get together here and move on. … We took a step in the right direction in a number of areas, and felt a number of components of our football team also improved.”

Wentz threw two interceptions and lost two fumbles but his 9-yard TD pass to Travis Fulgham in the third quarter gave Philadelphia the lead for good. Wentz connected with Jalen Reagor on the 2-point conversion to make it 15-9.

“Too many turnovers. I got to be better,” Wentz said. “I’m not good enough.”

Dallas was driving at the Eagles 21 with a chance to take the lead in the fourth quarter when DiNucci was sacked by T.J. Edwards and fumbled. McLeod picked up a loose ball and went the distance for a 21-9 lead. The 2-point conversion failed, but Dallas later took a safety on a punt.

DiNucci started because Andy Dalton is out with a concussion and Dak Prescott broke his right ankle in Week 5.

“I thought I played well at times,” DiNucci said. “Obviously. had two costly turnovers. The spot that we were in the game, field position, all that stuff, can’t really have that. So that’s on me.”

“A win is a win,” Eagles coach Doug Pederson said. “We have to start stacking them together. We’re happy and excited to get the win, but we have some things to figure out.”

Greg Zuerlein hit a 59-yard field goal to give Dallas a 9-7 halftime lead. The Cowboys turned two fourth-down stops at their 44 into short-drive field goals.

Philadelphia turned that turnover into a score as Wentz tossed a 2-yard TD pass to Reagor for a 7-3 lead. Reagor, the 21st overall pick, missed the previous five games following thumb surgery. A 32-yard pass to Fulgham set up the score.

The Eagles went for a fourth-and-3 at the Cowboys 44 on their next drive. Leighton Vander Esch sacked Wentz, knocking the ball away and Dallas recovered at Philadelphia’s 46. Zuerlein’s 49-yarder cut it to 7-6.

Diggs picked Wentz again on a deep pass on Philadelphia’s opening drive in the third quarter. But Zuerlein missed a 52-yarder wide right on the ensuing drive.

“I feel like we’re doing a heck of a job growing together,” Dallas defensive end DeMarcus Lawrence said. “We’ve just got to peak our game (from) tonight and come up with a win next time.”

TRICKERY—The Eagles pulled out the Philly Special in the second quarter with wideout Greg Ward, a college quarterback, looking to throw to Wentz, who was covered. Ward ended up running for 2 yards.

The Cowboys had Elliott and Cedrick Wilson take direct snaps in a wildcat formation with DiNucci split wide.

Wentz threw a pair of interceptions and lost two fumbles. He now has a league-leading 16 turnovers on the season — five more than New York Giants‘ Daniel Jones and Minnesota’s Kirk Cousins, who are tied for second with 11 each. At least Wentz clicked into playmaker mode for a stretch in the second half, following a familiar pattern, and hit wide receiver Travis Fulgham for a go-ahead 9-yard touchdown late in the third quarter.

As flawed as this team is, the Eagles enter their Week 9 bye atop the division at 3-4-1 and with a good shot at making the playoffs. According to ESPN’s Playoff Predictor, they have a 67% chance of reaching the postseason following Sunday night’s victory.