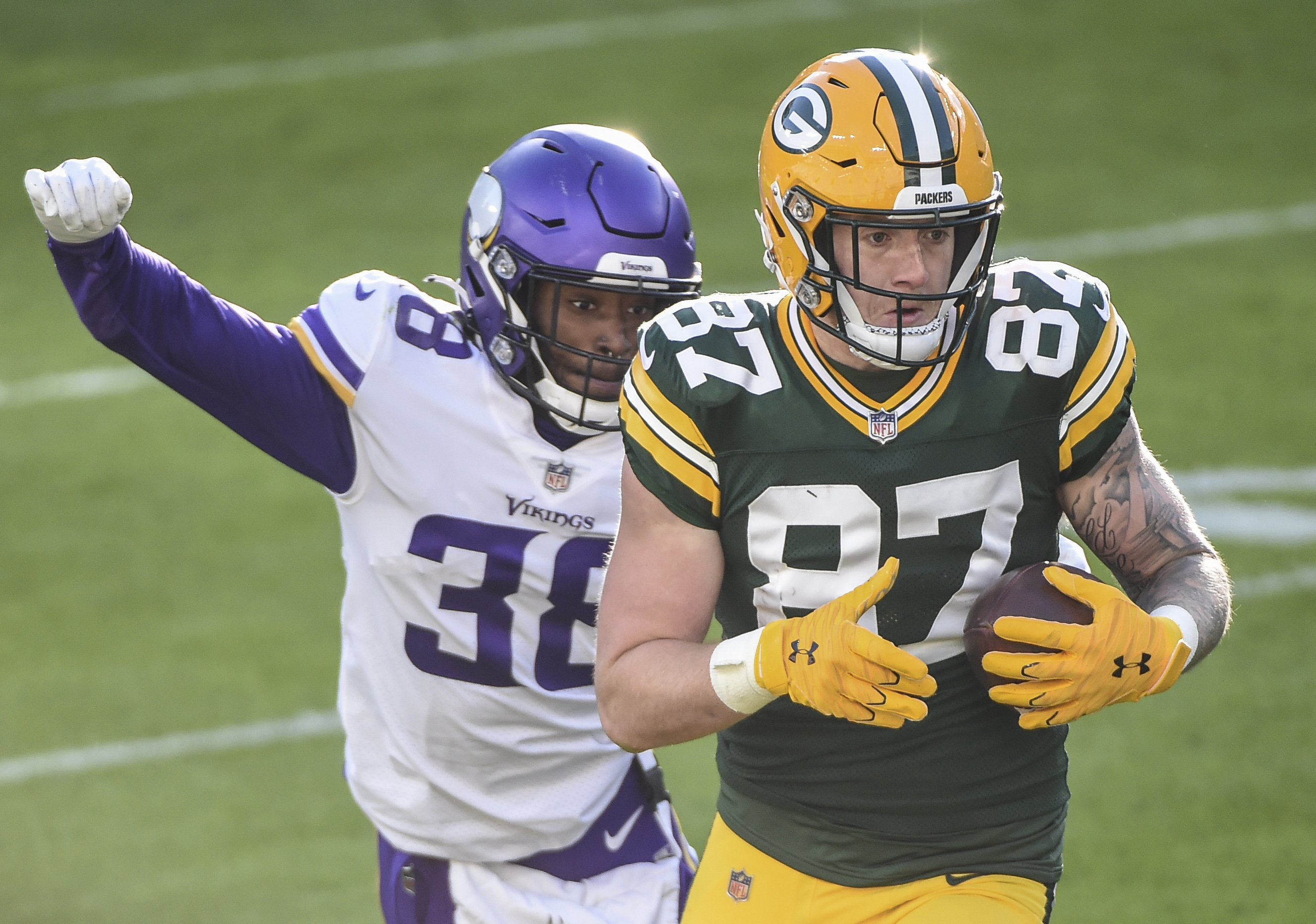 The Green Bay Packers run defense reverted to form and couldn’t stop Dalvin Cook as the Packers fell to the Minnesota Vikings 28-22 at Lambeau Field. Cook scored all four Vikings touchdown and gained more than 200 yards from scrimmage in the game.

Aaron Rodgers threw three touchdown passes to Davante Adams, but the Packers offense sputtered in the second half and the defense didn’t stop the Minnesota running game until it was too late.

The loss drops the Packers to 5-2 on the season and it was the team’s first division loss under head coach Matt LaFleur.

Here are 10 things we learned from the Packers 28-22 loss to the Vikings:

1. The Run Defense Is Still a Problem

The Vikings ran the ball at will for most of this football game. Cook was the dominant player, gaining more than 200 yards from scrimmage in the game and scoring four touchdowns, the most for a Vikings player since 1979.

Cook gained 163 yards on 30 carries and scored three rushing touchdowns. He also caught two passes for 63 yards which included a 50-yard touchdown on a short pass that featured extremely poor tackling by the Green Bay defense.

Yes, Cook is an outstanding back, but unless the Packers can do a better job of stopping the run, Thursday’s game in San Francisco will be déjà vu all over again for this team.

2. Jamaal Williams Can Start On Many Teams

Jamaal Williams gained 75 yards on 16 carries, a solid 4.7-yard average. He also caught six passes for 27 yards including a pair of passes that got the Packers into Vikings territory and stopped the clock on the final drive.

Williams may not be as explosive or dynamic as Aaron Jones, but he is a solid starter and a smart and determined runner who gets the most out of his ability.

The Packers running game was good enough to win this game and was not part of the problem today.

3. The Offense Lacked Urgency Late in the Game

The Packers trailed the Vikings 28-14 with about six minutes left in the fourth quarter and they had the ball. Unfortunately, the offense did not go to a no-huddle or even up-tempo look and even though the Packers did score, they took too much time off the clock when they did it.

The drive went nine plays and 74 yards and took more than half the remaining time off the clock. If the Packers would have gone no-huddle or up-tempo, they could have saved a valuable minute or so off the clock that could have made a big difference at the end of the game.

4. Davante Adams Was Held In Check (Sort Of)

The good news on Adams: he caught seven passes and scored three touchdowns. The bad news: he gained only 53 yards on those seven catches.

The Packers were unable to get Adams the ball down the field with any kind of consistency. His long catch for the day was 15 yards. The wind may have been a factor, but the offense needed more from Adams after the catch then.

Minnesota even used the Tampa 2 defense and had a linebacker doubling up Adams on many plays he ran down the middle. This worked most of the time and prevented Adams from making any big plays.

The offense was shut down for all the third quarter and the first half of the fourth and when the defense can’t stop the opposing running game, that was enough for Minnesota to win the game.

5. The Defense Got Little Pressure on Kirk Cousins

The Packers managed only one sack in this game and Dean Lowry got it. It was Lowry’s first sack since 2018. Nobody else was even credited with a quarterback hit in this game.

This game resembled the NFC title game from last year in that the Vikings didn’t have to throw the football very often to move it consistently. Cousins threw only 14 passes all game and he completed 11 of them for 160 yards. That gave him a 138.1 quarterback rating. Fifty of those yards came on a short pass to Cook that ended up going 50 yards for a touchdown.

Besides the touchdown, the Vikings longest pass of the day was for only 16 yards, but when they are running the ball that well, it was enough to keep the chains moving for Minnesota.

Cousins was efficient but that’s all he had to be. He had plenty of time to throw when he wanted to and the Vikings were able to convert 4-of-8 third down conversions and their only fourth down conversion.

In the final analysis, the Packers defense didn’t do a good job of stopping anybody and the Vikings punted only three times with two of them coming after the Packers trailed by two touchdowns in the fourth quarter.

The Packers two pass-catching tight ends had good receiving games. Robert Tonyan caught five passes on seven targets for 79 yards including a 45 yard catch that was the Packers longest gain of the day.

Jace Sternberger made three catches for 46 yards including a key 27-yard reception that moved the chains when it counted.

Marcedes Lewis struggled a bit. He wasn’t targeted in the passing game and was called for two holding penalties although at least one of them was questionable.

The tight ends were a key part of the passing offense and the only way the Packers could get the ball downfield with any consistency.

There is no question the gusty wind slowed the Packers passing game. Rodgers rarely threw downfield and when he did, the wind often limited what he could do. With the big play held in check, the Packers had to resort to longer drives that included no mistakes.

Unfortunately, the Packers committed nine penalties in this game for 85 yards and that made it tougher for Rodgers and the offense to sustain lengthy drives.

The offense did not do enough to adjust in the third quarter and their only drive stalled at the Minnesota 37 when the Packers lost the ball on downs. Then the defense allowed the 50-yard pass to Cook which gave the Vikings four straight scoring drives before they ever punted.

Rodgers finished the game with a quarterback rating of 110.9, mostly on the strength of his three touchdown passes without a pick. He went 27-for-41 for 291 yards in this game but the offense was not in synch in the second half until it was too late.

8. The Officiating Hurt the Packers at Times

First thing’s first, the Packers didn’t deserve to win this game regardless of these questionable calls. But there were a few calls that went against the Packers and hurt their chances of winning.

The biggest one came midway through the fourth quarter on a 4th-and-9 attempt to Robert Tonyan. Minnesota’s Anthony Harris had one arm around Tonyan’s waist, never looked back for the ball and hit Tonyan with his other hand before the ball arrived. A flag was thrown on the play but the officials conferenced and decided to pick up the flag. Minnesota got the ball back up by two scores with 8:15 left in the game.

There was at least one questionable pass interference call against the Packers and a bad holding call on Marcedes Lewis. Elgton Jenkins also committed a pair of holding penalties. At the end of the day, these questionable calls only added to the team’s frustration and weren’t the biggest reason the Packers lost.

On too many plays, the Packers took poor angles to the ball carrier and missed makeable tackles that would have limited Cook to short gains. Instead, Cook kept going and turned one or two yard gains into six or seven yard gains.

The Packers need to take better angles and wrap up opposing ball carriers when they have the chance to make a tackle. If they can’t, they will have a lot of problems on Thursday against the 49ers.

The Packers wide receivers not named Davante Adams provided precious little help for the offense. The wind was certainly a factor, but the other receivers weren’t open much and weren’t productive.

Equanimeous St. Brown, Marquez Valdes-Scantling, Darrius Shepherd and Malik Taylor each made only one catch against a beat up and beleaguered Vikings secondary. Simply put, if these players can’t get open against this secondary, they won’t have much success against most NFL defenses.

LaFleur could have called some shorter passes that could have schemed these players open, but most of the passes that worked either went to Davante or the tight ends. The Packers can certainly use a quality option after Davante. It’s possible that Allen Lazard’s return can help them in this area once he returns to the lineup.

This was far from the Packers biggest problem, but it is an issue the team must address.